Abraham Lincoln’s personal secretary John Nicolay believed that no photograph could capture Honest Abe’s essence: “There are many pictures of Lincoln,” he said, “[but] there is no portrait of him.” Over 130 photographs of Lincoln exist—here are a few you may not have come across before. 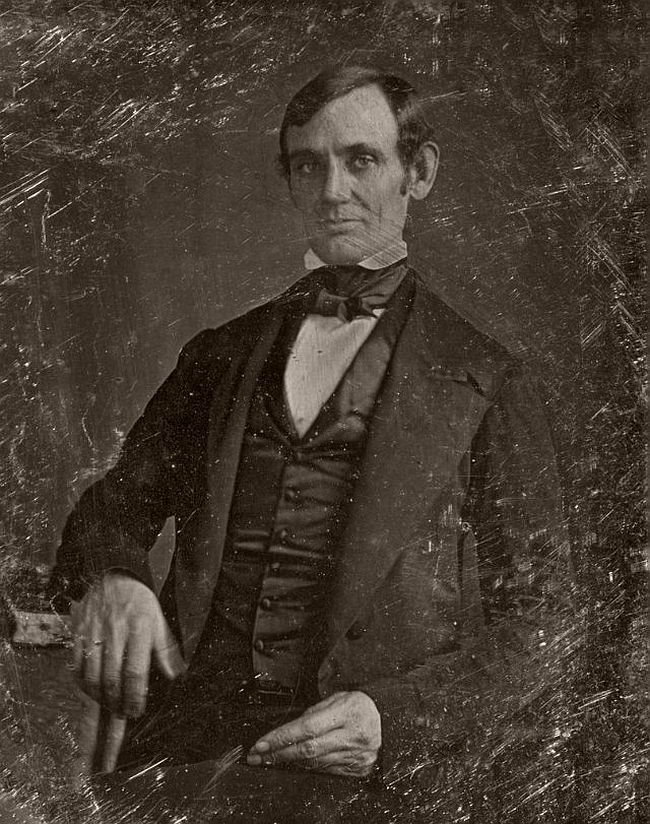 1846 or 1847 – Nicholas H. Shepherd – This daguerreotype is the earliest confirmed photographic image of Abraham Lincoln. It was reportedly made in 1846 by Nicholas H. Shepherd shortly after Lincoln was elected to the United States House of Representatives. Shepherd’s Daguerreotype Miniature Gallery, which he advertised in the Sangamo Journal, was located in Springfield over the drug store of J. Brookie. Shepherd also studied law at the law office of Lincoln and Herndon. 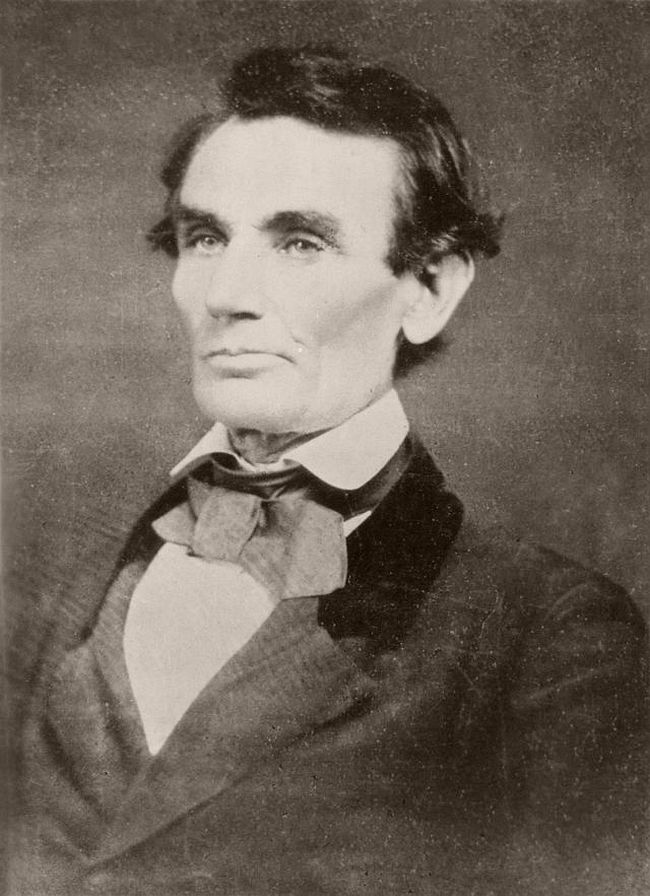 May 25, 1858 – Samuel G. Alschuler – “At the time I was [a young] clerk of the circuit court, and was about as well acquainted with Mr. Lincoln as with most of the forty-odd lawyers who practiced law in the circuit… On the opening day of court, which was always an interesting occasion, largely because we were curious to see what attorneys from a distance were in attendance…I observed that Mr. Lincoln was among them; and as I looked in his direction, he arose from his seat, and came forward and gave me a cordial hand-shake, accompanying the action with words of congratulation on my election. I mention this fact because the conduct of Mr. Lincoln was so in contrast with that of the other members of the bar that it touched me deeply, and made me, ever afterwards, his steadfast friend.” — C. F. Gunther of Chicago, circa 1896 Letter. “One morning I was in the gallery of Mr. Alschuler, when Mr. Lincoln came into the room and said he had been informed that he (Alschuler) wished him to sit for a picture. Alschuler said he had sent such a message to Mr. Lincoln, but he could not take the picture in that coat (referring to a linen duster in which Mr. Lincoln was clad), and asked if he had not a dark coat in which he could sit. Mr. Lincoln said he had not; that this was the only coat he had brought with him from his home. Alschuler said he could wear his coat, and gave it to Mr. Lincoln, who pulled off the duster and put on the artist’s coat. Alschuler was a very short man, with short arms, but with a body nearly as large as the body of Mr. Lincoln. The arms of the latter extended through the sleeves of the coat of Alschuler a quarter of a yard, making him quite ludicrous, at which he (Lincoln) laughed immoderately, and sat down for the picture to be taken with an effort at being sober enough for the occasion. The lips in the picture show this.” — Mr. J. O. Cunningham, present when the picture was take. 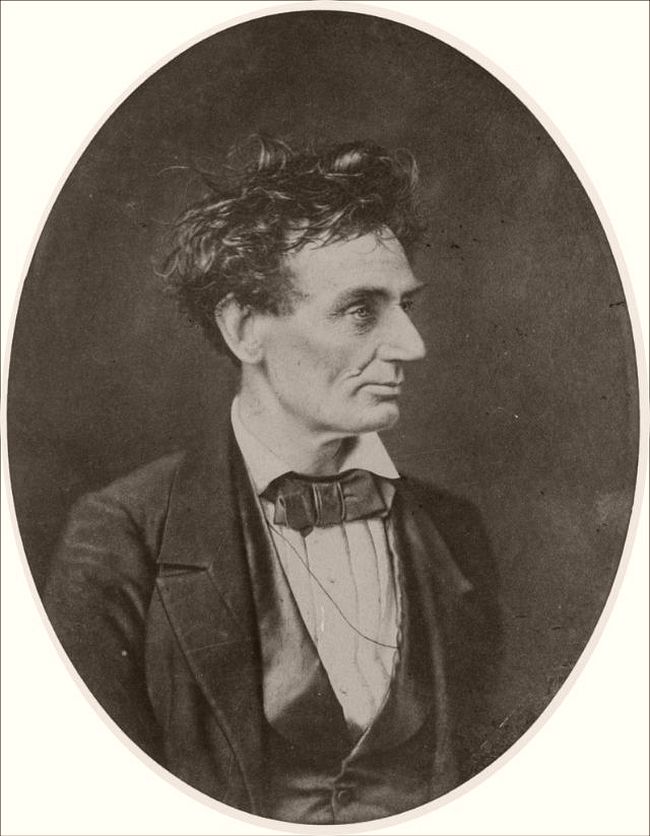 February 28, 1857 – Alexander Hessler – “I have a letter from Mr. Hesler stating that [Lincoln] came in and made arrangements for the sitting, so that the members of the bar could get prints. Lincoln said at the time that he did not know why the boys wanted such a homely face. Joseph Medill went with Mr. Lincoln to have the picture taken. He says that the photographer insisted on smoothing down Lincoln’s hair, but Lincoln did not like the result, and ran his fingers through it before sitting.” — H. W. Fay of DeKalb, Illinois, original owner of the photo. Lincoln immediately prior to his Senate nomination. The original negative was burned in the Great Chicago Fire. 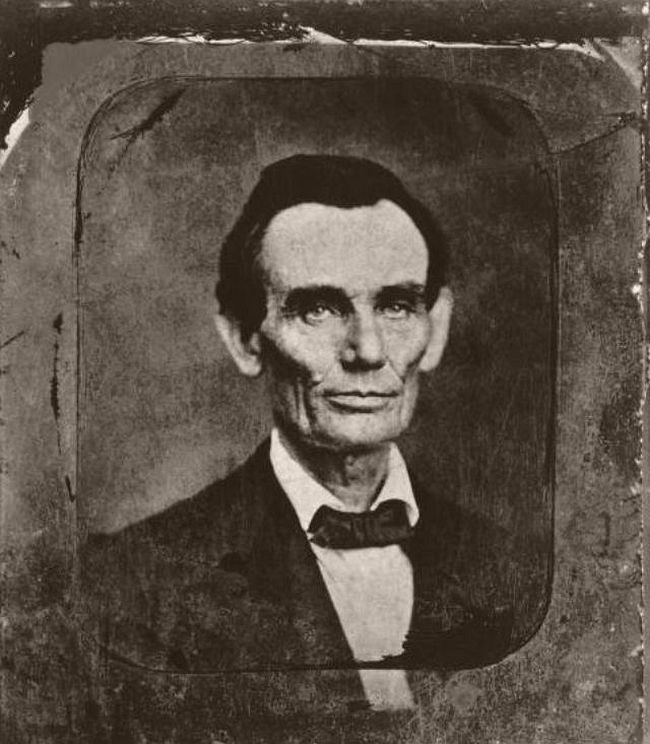 May 27, 1857 – Amon T. Joslin – Although some historians have dated this photograph during the court session of November 13, 1859, and others have placed it as early as 1853, most authorities now believe it was taken on May 27, 1857. The photographer Amon T. Joslin owned “Joslin’s Gallery” located on the second floor of a building adjoining the Woodbury Drug Store, in Danville, IL. This was one of Lincoln’s favorite stopping places in Vermilion County, Illinois, while he was a traveling lawyer. Joslin photographed Abraham Lincoln twice at this sitting. Lincoln kept one copy and gave the other to his friend, Thomas J. Hilyard, deputy sheriff of Vermilion County. Today, one original resides in the Illinois State Historical Library. 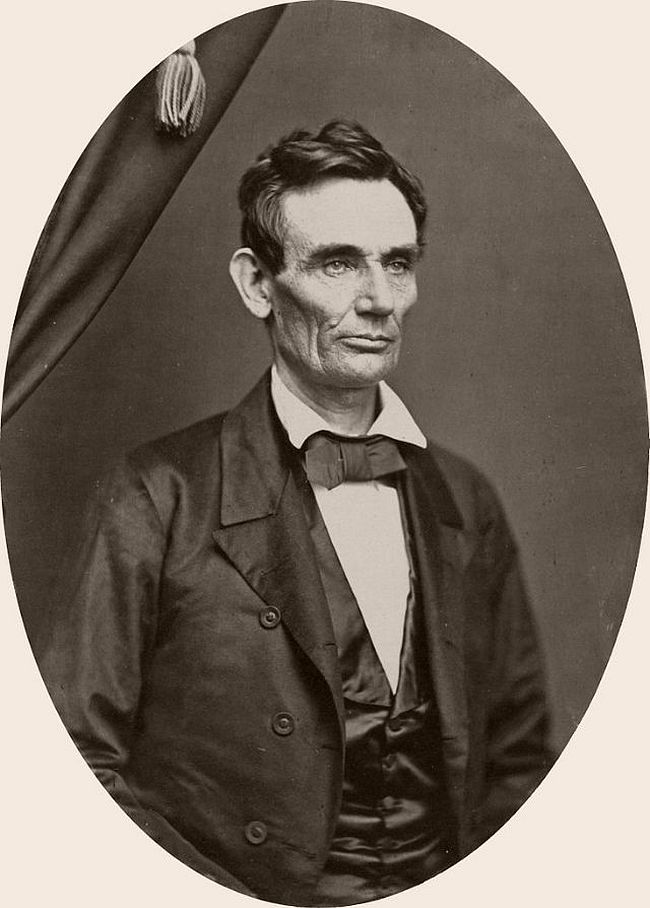 1858 – Roderick M. Cole – “…the Photo you have of Abraham Lincoln is a copy of a Daguerreotype, that I made in my gallery in this city [Peoria] during the Lincoln and Douglas campaign. I invited him to my gallery to give me a sitting…and when I had my plate ready, he said to me, ‘I cannot see why all you artists want a likeness of me unless it is because I am the homeliest man in the State of Illinois.’” — R.M. Cole, July 3, 1905 letter to David McCulloch. Lincoln liked this image and often signed photographic prints for admirers. In fact, in 1861, he even gave a copy to his stepmother. The image was extensively employed on campaign ribbons in the 1860 Presidential campaign, and Lincoln “often signed photographic prints for visitors.” 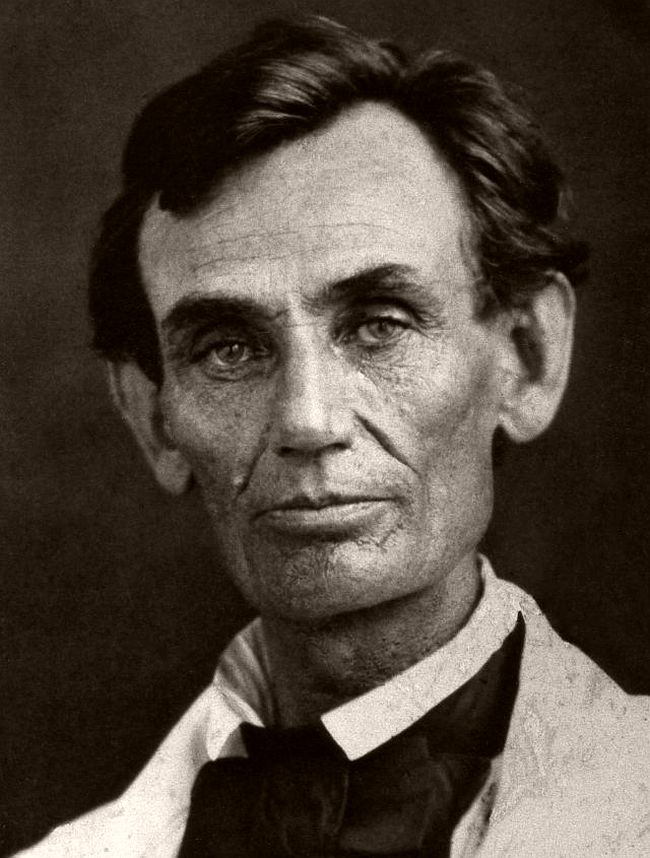 May 7, 1858 – Abraham M. Byers – Formerly in the Lincoln Monument collection at Springfield, Illinois. Mr. Lincoln wore a linen coat on the occasion. The picture is regarded as a good likeness of him as he appeared during the Lincoln Douglas campaign. 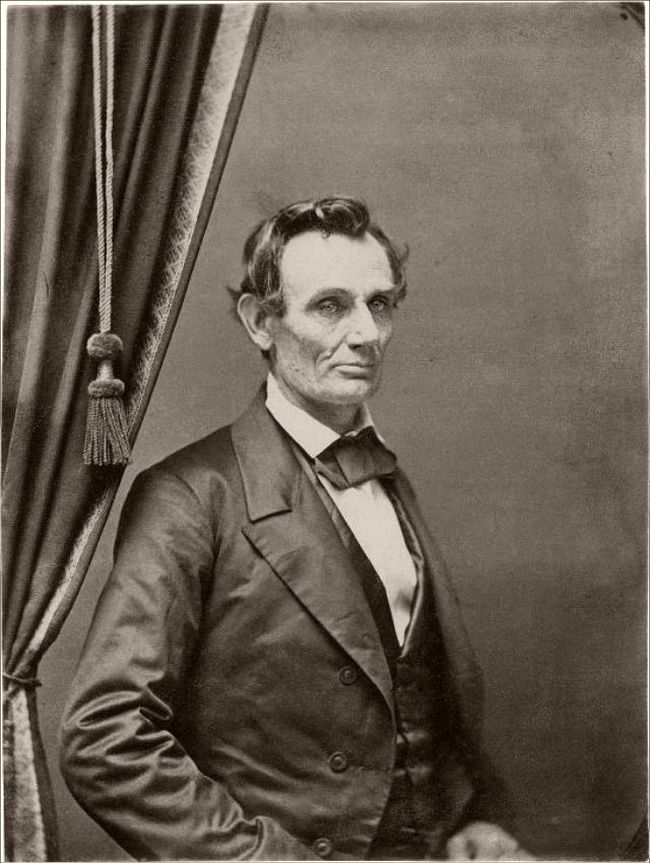 September 26, 1858 – (attributed to Christopher S. German) – “In 1858 Lincoln and Douglas had a series of joint debates in this State, and this city was one place of meeting. Mr. Lincoln’s step-mother was making her home with my father and mother at that time. Mr. Lincoln stopped at our house, and as he was going away my mother said to him: “Uncle Abe, I want a picture of you.” He replied, “Well, Harriet, when I get home I will have one taken for you and send it to you.” Soon after, mother received the photograph, which she still has, already framed, from Springfield, Illinois, with a letter from Mr. Lincoln, in which he said, “This is not a very good-looking picture, but it’s the best that could be produced from the poor subject.” He also said that he had it taken solely for my mother.” — Mr. K. N. Chapman of Charleston, Illinois, great-grandson of Sarah Bush Lincoln. 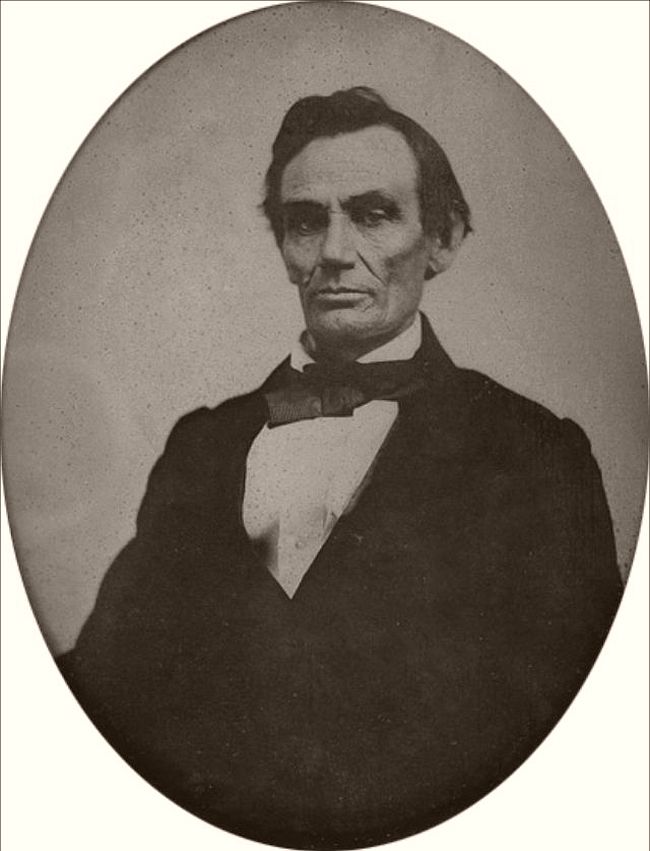 October 11, 1858 – William Judkins Thomson – This ambrotype was taken two days before the next to last debate with Douglas in Quincy, Illinois. 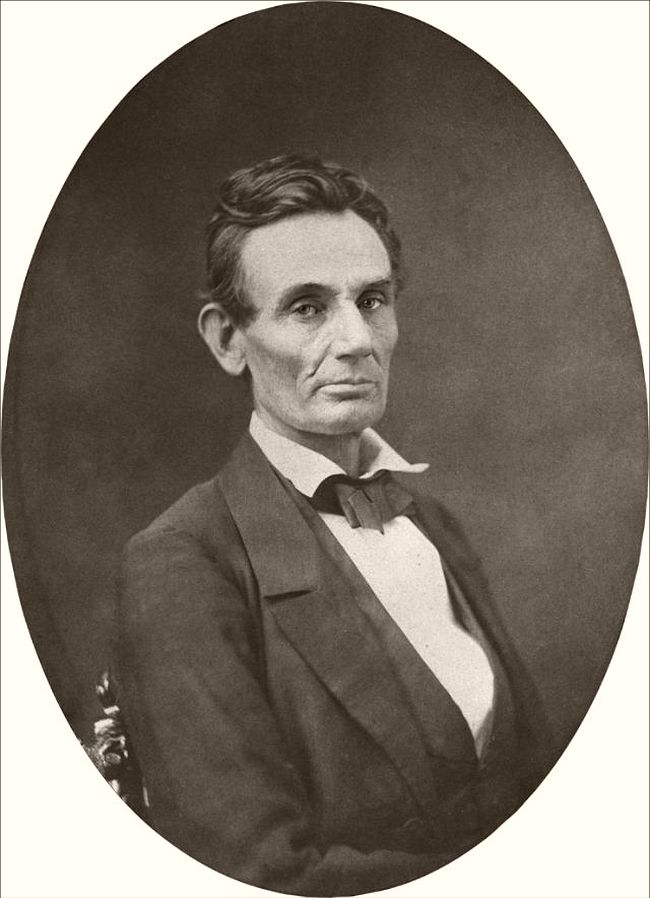 October 4, 1859 – Samuel M. Fassett – Lincoln sat for this portrait at the gallery of Cooke and Fassett in Chicago. Cooke wrote in 1865 “Mrs. Lincoln pronounced [it] the best likeness she had ever seen of her husband.” 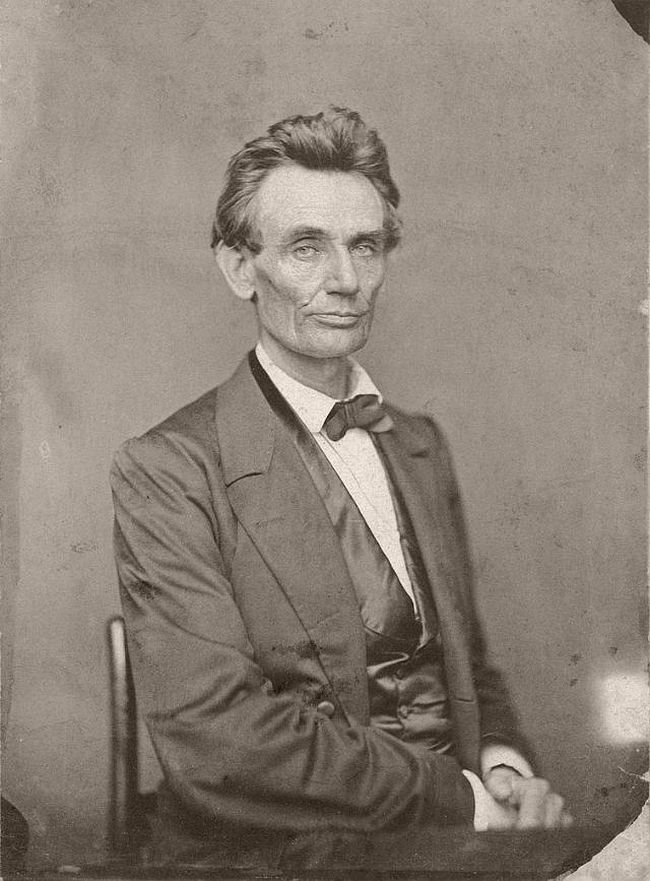 May 20, 1860 – William Marsh – One of five photographs taken by William Marsh for Marcus Lawrence Ward. Although many in the East had read Lincoln’s impassioned speeches, few had actually seen the Representative from Illinois. 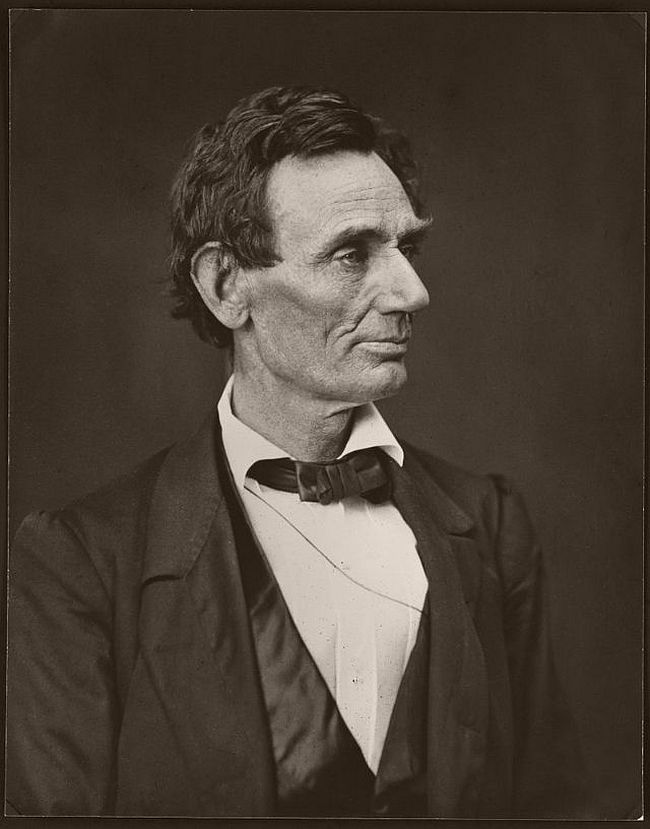 June 3, 1860 – Alexander Hesler – Hesler took a total of four portraits at this sitting. Lincoln’s law partner William Herndon wrote of this picture: “There is the peculiar curve of the lower lip, the lone mole on the right cheek, and a pose of the head so essentially Lincolnian; no other artist has ever caught it.” 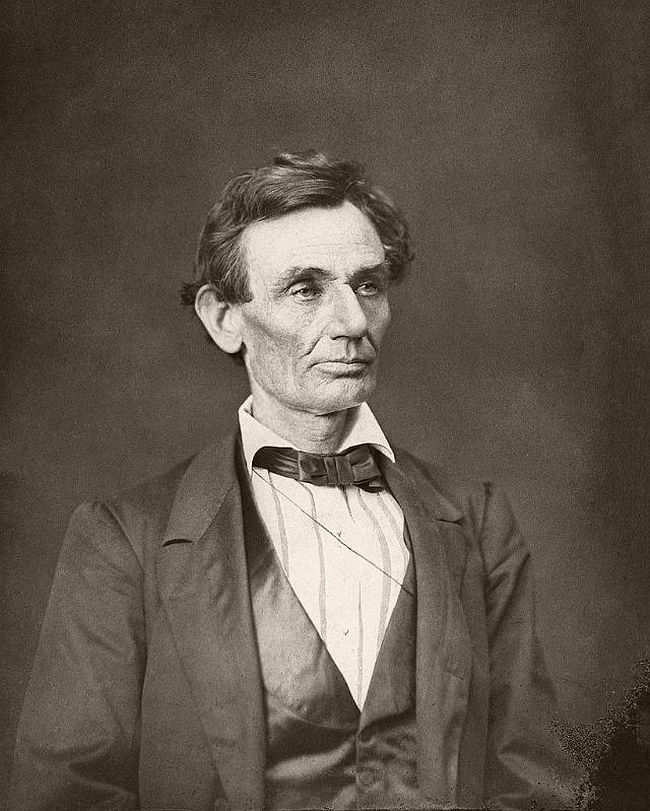 June 3, 1860 – Alexander Hesler – When Lincoln saw this photograph, along with his side view portrait from the same sitting, he remarked “That looks better and expresses me better than any I have ever seen; if it pleases the people I am satisfied.” 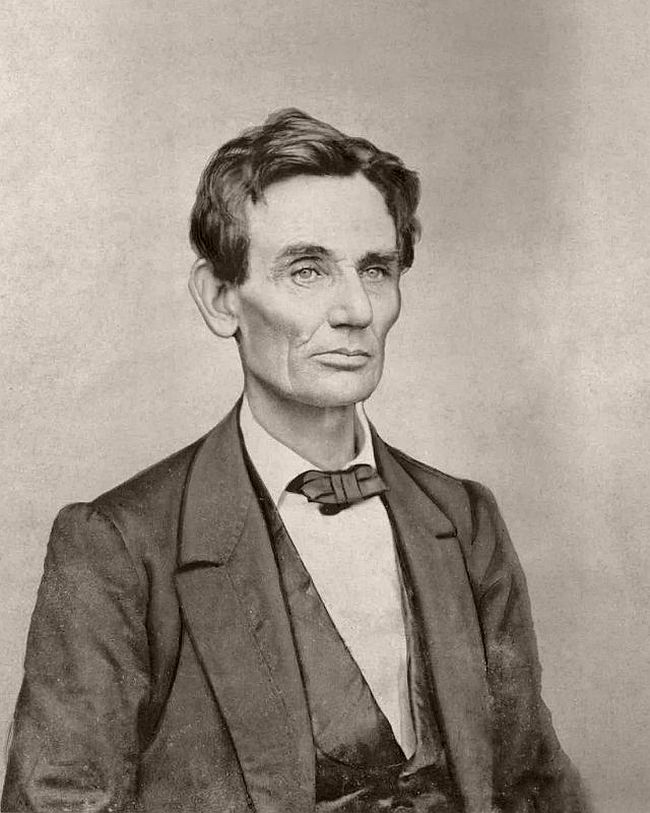 1860 (spring or summer) – William Shaw – This image has been heavily retouched at some point. Lincoln’s neck, skin and cheek lines are smoothed out, and the bag under the right eye has been diminished. 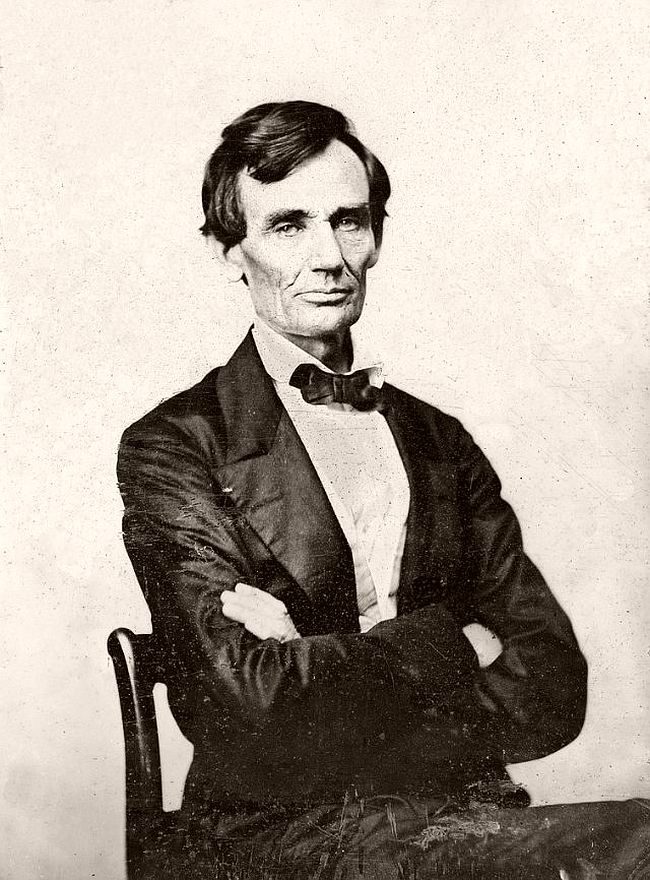 August 13, 1860 – Preston Butler – The last beardless photograph of Lincoln. John M. Read commissioned Philadelphia artist John Henry Brown to paint a good-looking miniature of Lincoln “whether or not the subject justified it.” This ambrotype is one of six taken on Monday, August 13, 1860 in Butler’s daguerreotype studio (of which only two survive), made for the portrait painter. 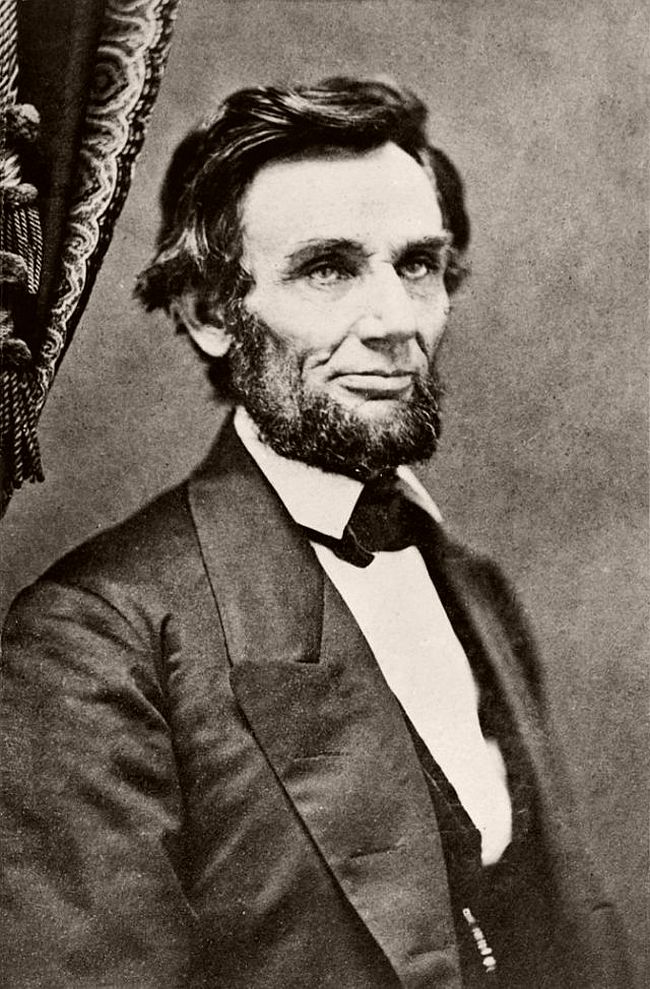 February 9, 1861 – Christopher S. German – This photograph was taken two days before he left Springfield en route to Washington, DC, for his inauguration. 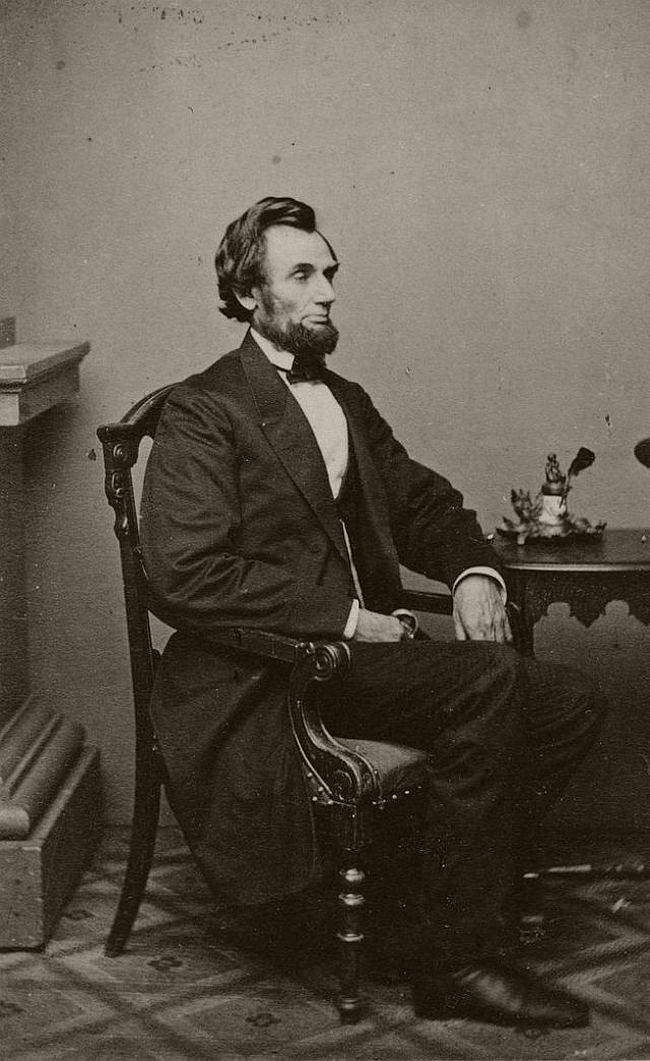 February 24, 1861 – Alexander Gardner – Taken during President-elect Lincoln’s first sitting in Washington, D.C., the day after his arrival by train. 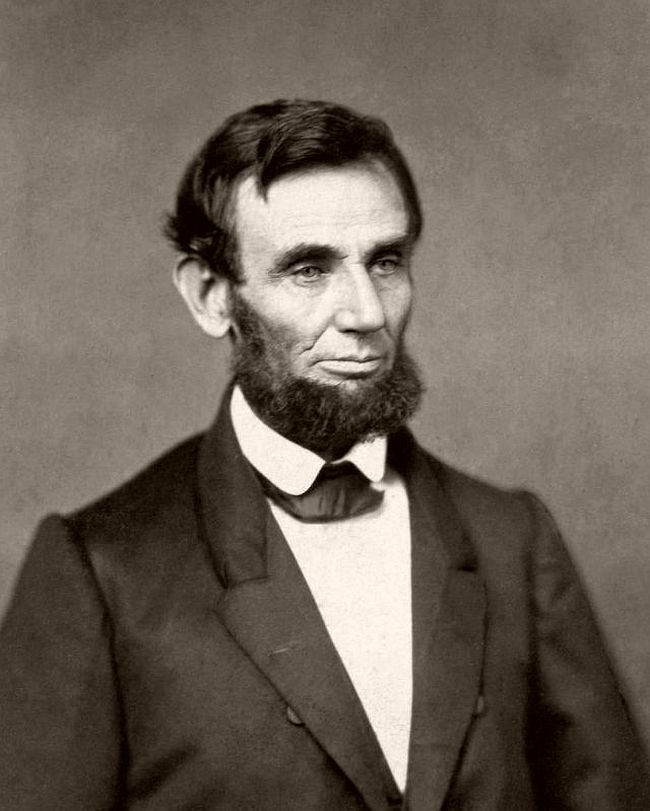 March 1, 1861 and June 30, 1861 (between) – (unknown) – The first photographic image of the new president. Remarkably, it is not known where or by whom this portrait was taken; the few known examples carry imprints of several different photographers: C.D Fredericks & Co. of New York; W.L. Germon and James E. McLees, both of Philadelphia. This example has been termed “the most valuable Lincoln photo in existence” and sold at auction in 2009 for $206,500. 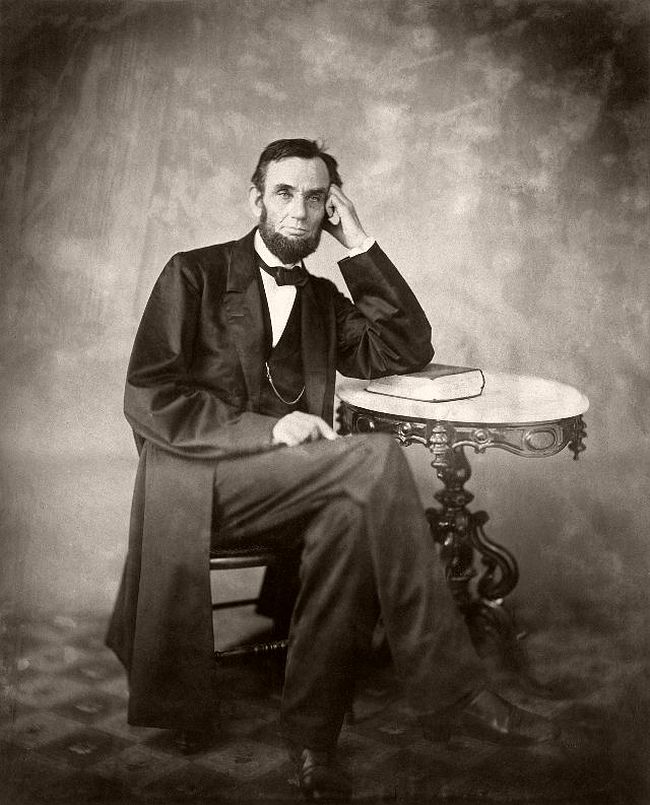 August 9, 1863 – Alexander Gardner – Lincoln’s “Photographer’s Face”. Per Dr. James Miner, “His large bony face when in repose was unspeakably sad and as unreadable as that of a sphinx, his eyes were as expressionless as those of a dead fish; but when he smiled or laughed at one of his own stories or that of another then everything about him changed; his figure became alert, a lightning change came over his countenance, his eyes scintillated and I thought he had the most expressive features I had ever seen on the face of a man.”