With men recruited for the armed forces, the industrial workforce changed. Women took on previously male-dominated roles in industry during the war, working alongside men in reserved occupations. Women made an increasingly varied contribution, working in labs, mills and factories, sometimes in hazardous circumstances. 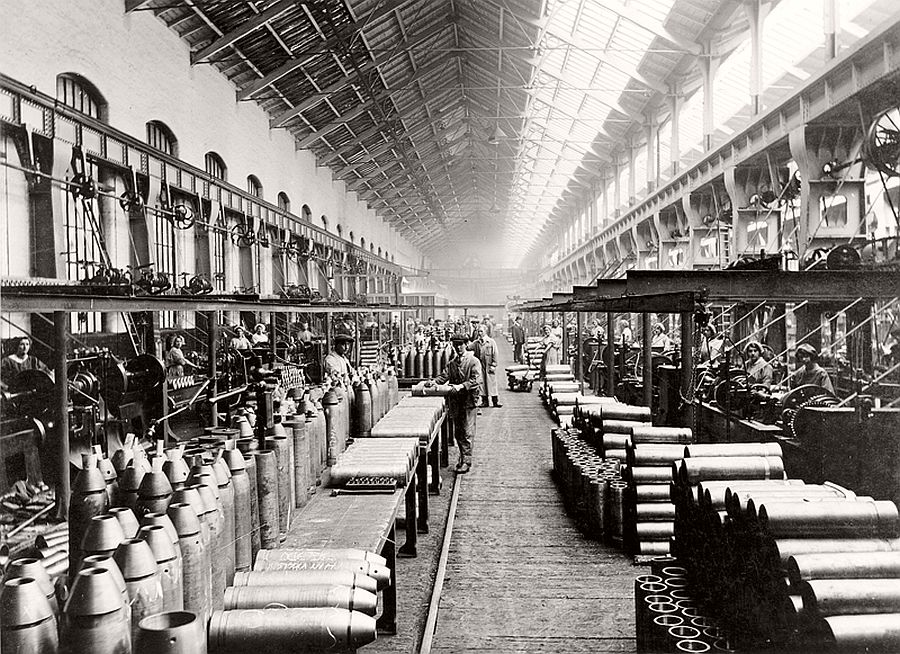 Women munitions workers, alongside their male counterparts, produce 6-inch high explosive shells at the works of the Yorkshire & Lancashire Railway Company at Horwich, Bolton in 1917. Many companies switched to making munitions during the war, as well as welcoming more women into their workforce. © Imperial War Museums) 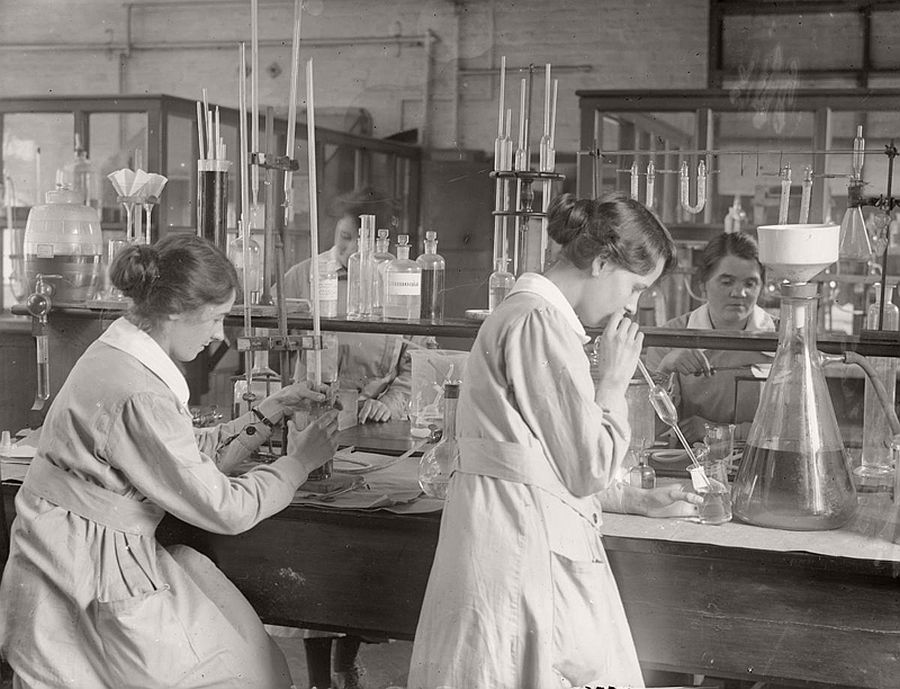 Women at work in the laboratory of Brunner, Mond & Co in Northwich, a company that manufactured sodium bicarbonate. Sometimes known as baking soda, sodium bicarbonate was used for baking and a range of other purposes. Women at the factory did a variety of jobs, from scientific lab work to packaging the finished product. © Imperial War Museums) 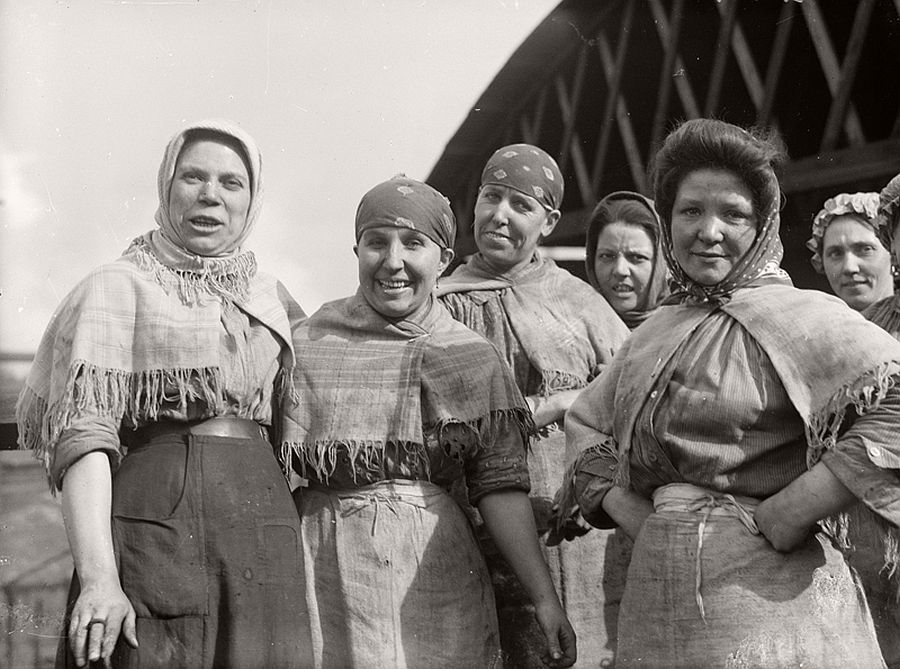 Women pit brow workers of the Wigan Coal and Iron Company, 1918. These women sorted coal and moved heavy tubs on the surface of a coal mine – work that was dirty and physically demanding. Jobs like these had been done by working class women before the war and continued to be important in wartime. © Imperial War Museums) 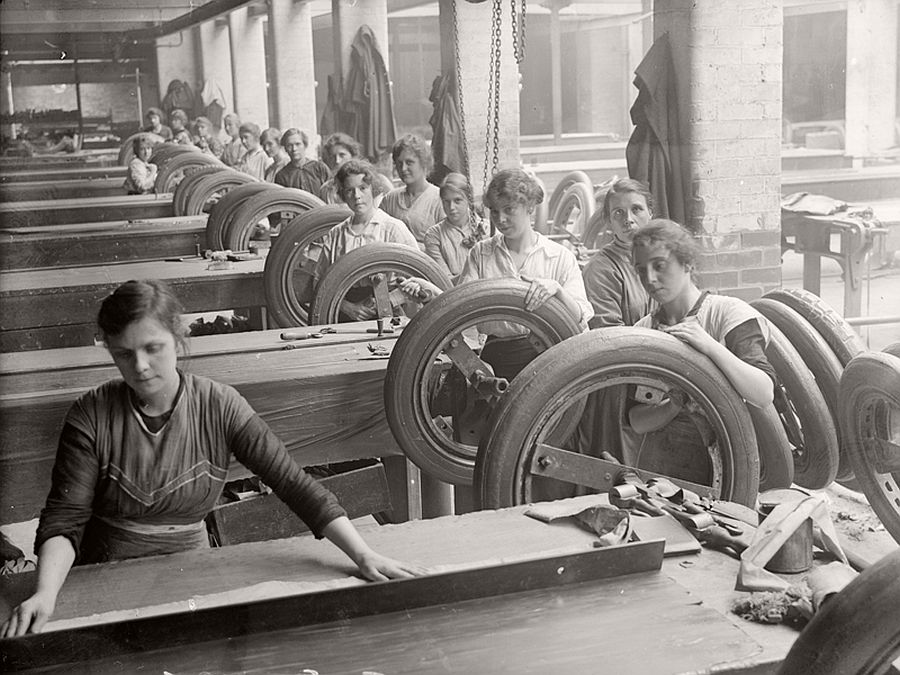 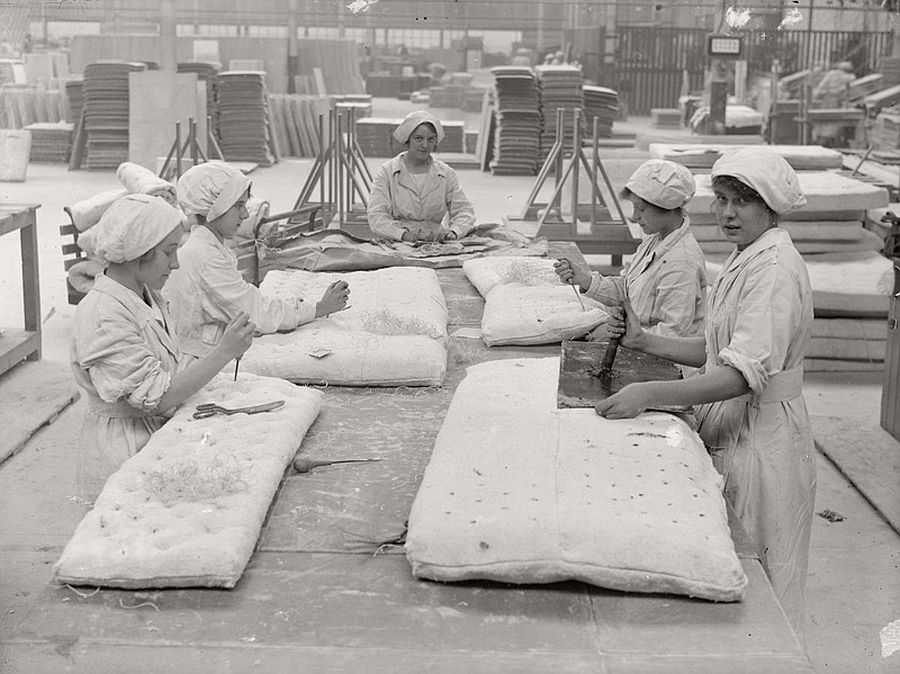 Women workers producing asbestos mattresses at the factory of Turner Brothers in Trafford Park, Manchester. Whilst appreciated as a hazardous material today, asbestos was used in a range of wartime products such as mattresses used to line the boilers of battleships. © Imperial War Museums) 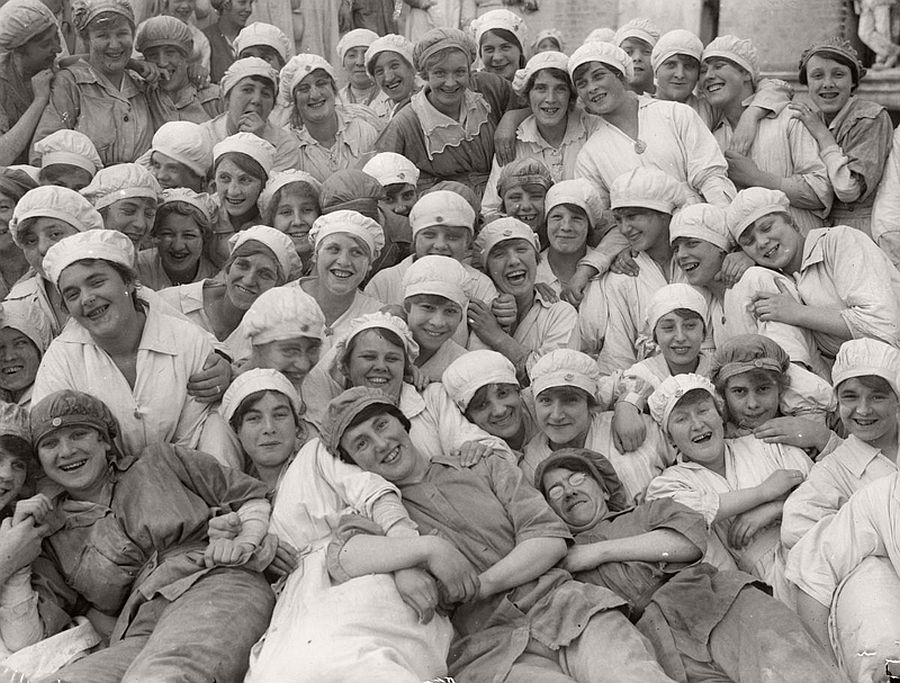 Women workers of a flour mill at Rank & Sons, Birkenhead, Cheshire, happily pose for the camera in 1918. Working in industry could be hard, monotonous and sometimes dangerous, but there was also a strong sense of camaraderie amongst workers. Wartime conditions saw a greater variety of opportunities for women. © Imperial War Museums) 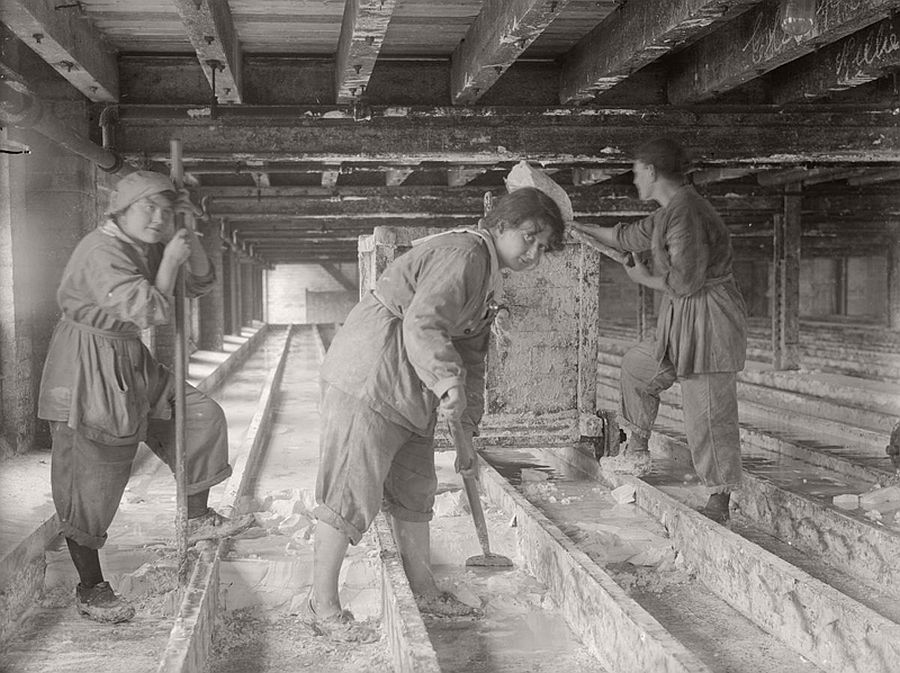 Women employees working in the glucose factory of Nicholls, Nagel & Co, Trafford Park, Manchester, 1918. They are scraping runs and shovelling starch into trucks as part of the manufacturing process. Women workers at this company did physical work like this, but also worked as chemists in the lab. © Imperial War Museums) 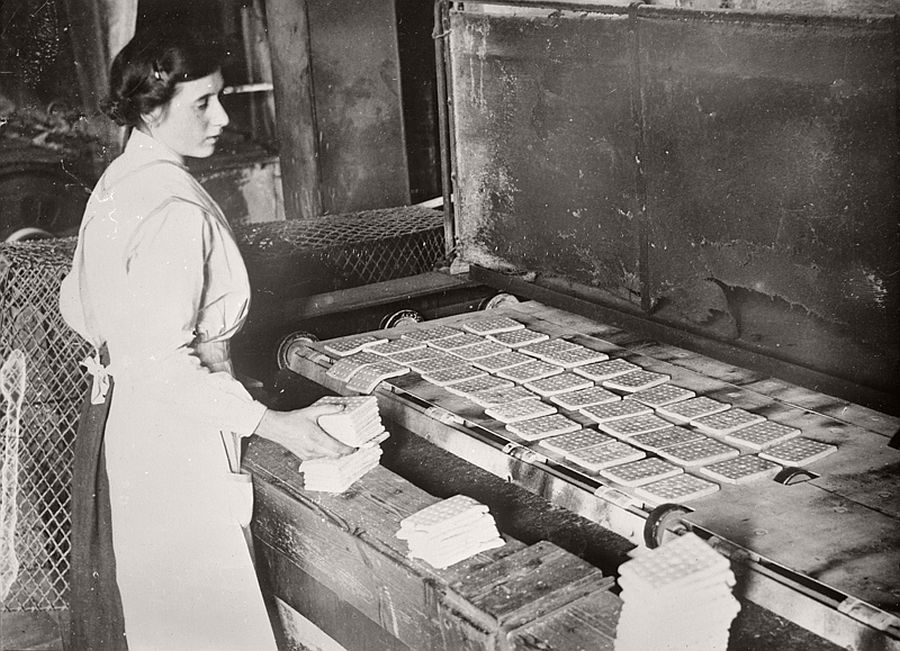 A worker baking biscuits at an army biscuit factory in Lancashire, 1918. These distinctive hard biscuits were an important staple of the rations of British soldiers during the war. While they tended to be unpopular with soldiers due to their hard texture, they provided useful nutrition in a form that was almost indestructible.© Imperial War Museums) 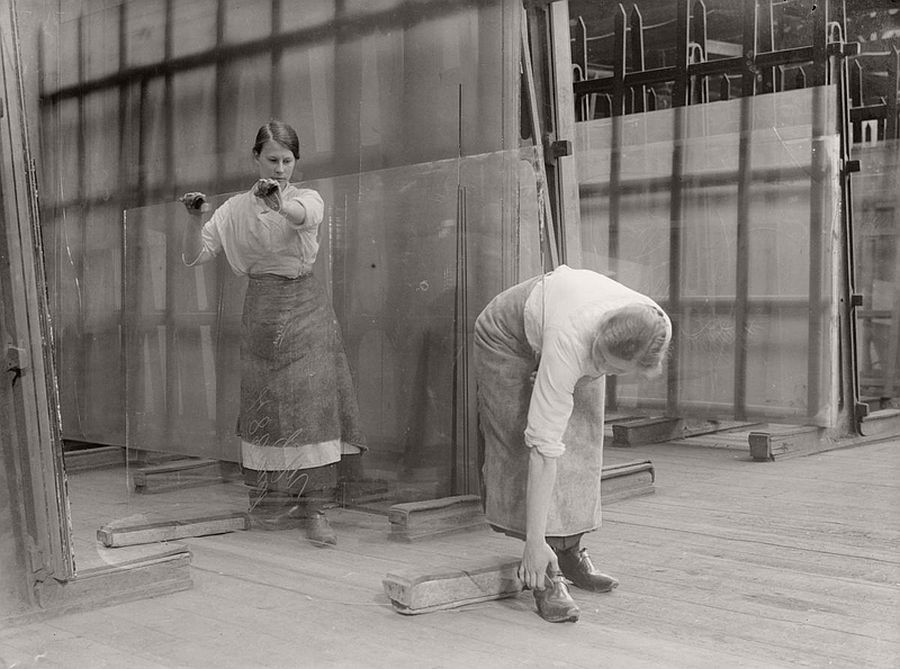 Women workers at the Pilkington’s glass factory in St Helens, Cheshire, 1918. They are shown handling large sheets of glass with only tiny protective pads to help them. The factory produced glass products from large sheets to small portholes for submarines.© Imperial War Museums) 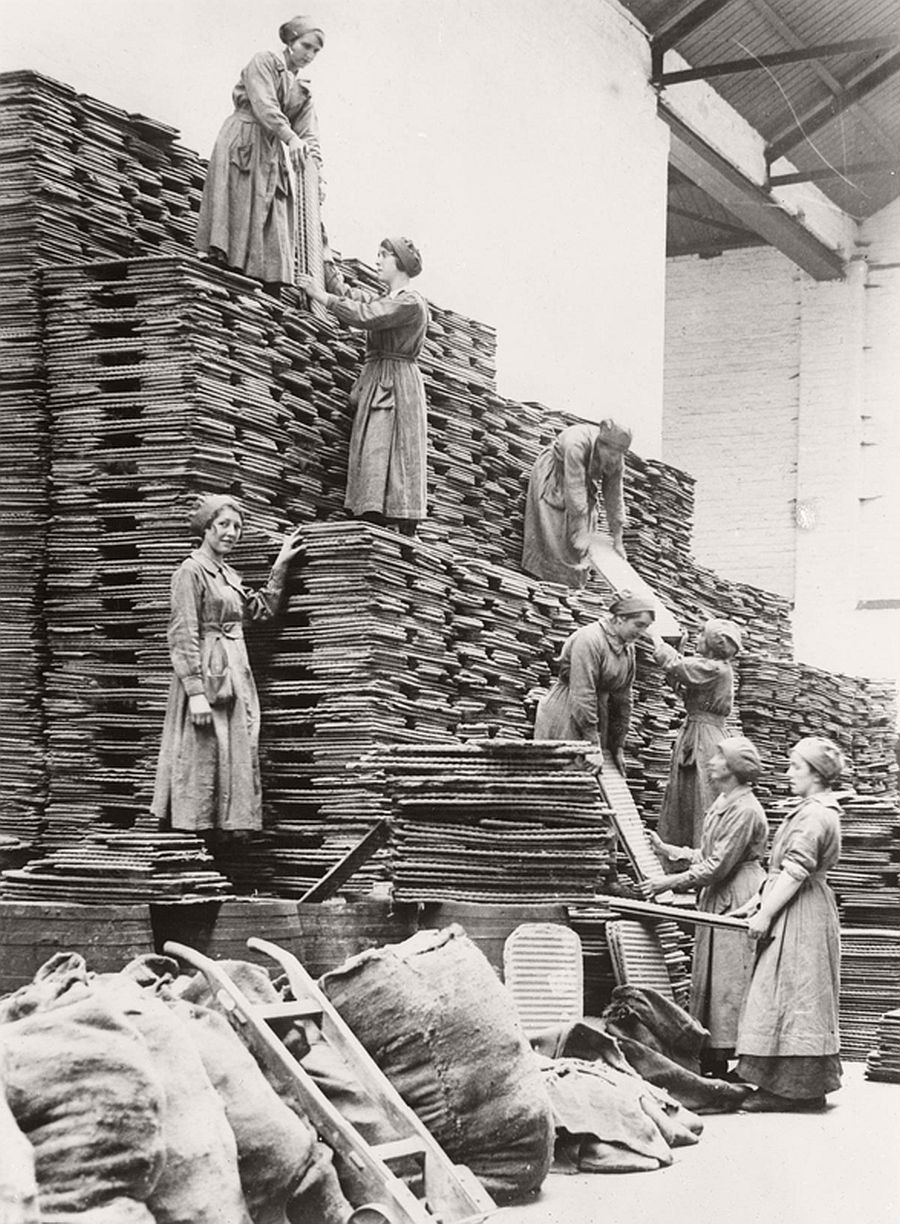