Vietnamese Lunar New Year or Tet Holiday, is the most important celebration in Vietnamese culture.

Tết in the three Vietnamese regions can be divided into three periods, known as Tất Niên (penultimate New Year’s Eve), Giao Thừa (New Year’s Eve), and Tân Niên (the New Year), representing the preparation before Tết, the eve of Tết, and the days of and following Tết, respectively.

The first day of Tết is reserved for the nuclear family. Children receive a red envelope containing money from their elders. This tradition is called mừng tuổi (happy new age) in the north and lì xì in the south. Usually, children wear their new clothes and give their elders the traditional Tết greetings before receiving the money. Since the Vietnamese believe that the first visitor a family receives in the year determines their fortune for the entire year, people never enter any house on the first day without being invited first. The act of being the first person to enter a house on Tết is called xông đất, xông nhà or đạp đất, which is one of the most important rituals during Tết. According to Vietnamese tradition, if good things come to the family on the first day of the lunar New Year, the entire following year will also be full of blessings. Usually, a person of good temper, morality, and success will be the lucky sign for the host family and be invited first into the house. However, just to be safe, the owner of the house will leave the house a few minutes before midnight and come back just as the clock strikes midnight to prevent anyone else entering the house first who might potentially bring any unfortunate events in the new year to the household.

Sweeping during Tết is taboo or xui (unlucky), since it symbolizes sweeping the luck away; that is why they clean before the new year. It is also taboo for anyone who experienced a recent loss of a family member to visit anyone else during Tết.

During subsequent days, people visit relatives and friends. Traditionally but not strictly, the second day of Tết is usually reserved for friends, while the third day is for teachers, who command respect in Vietnam. Local Buddhist temples are popular spots as people like to give donations and to get their fortunes told during Tết. Children are free to spend their new money on toys or on gambling games such as bầu cua cá cọp, which can be found in the streets. Prosperous families can pay for dragon dancers to perform at their house. Also, public performances are given for everyone to watch. 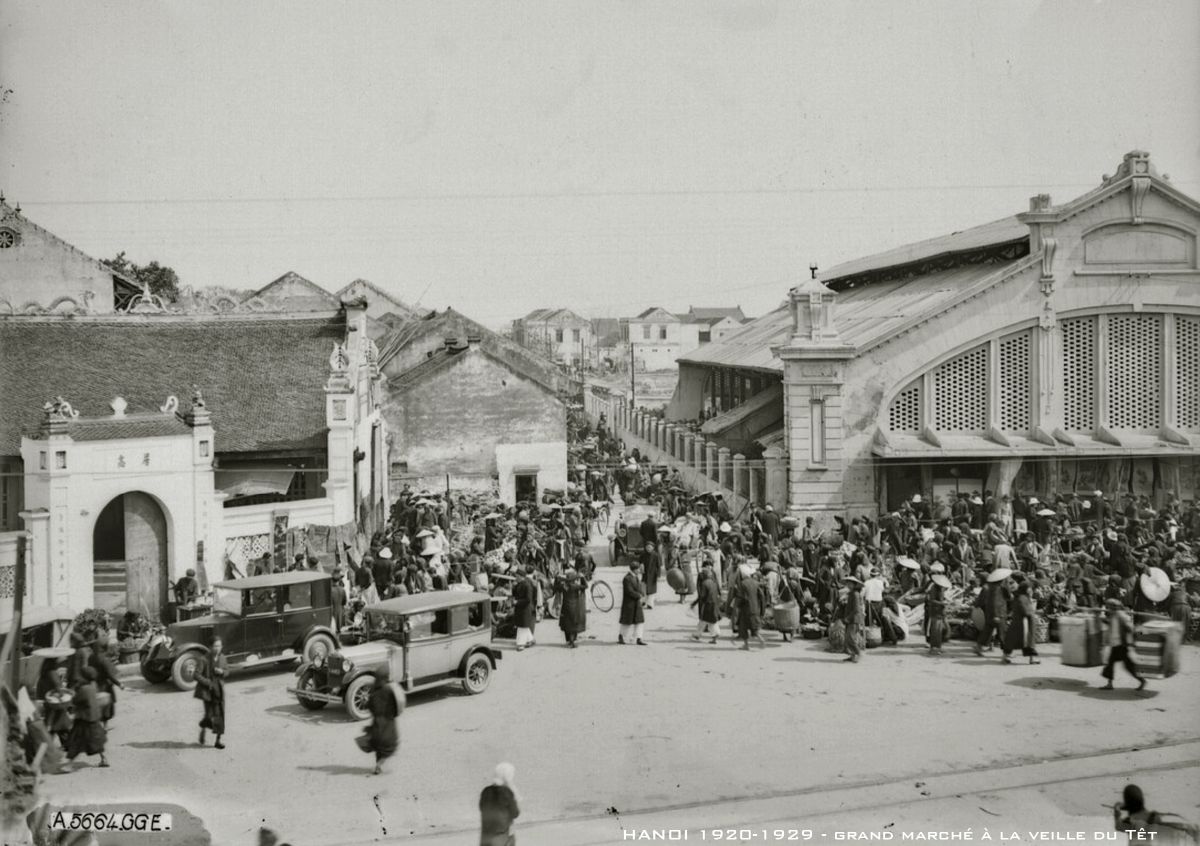 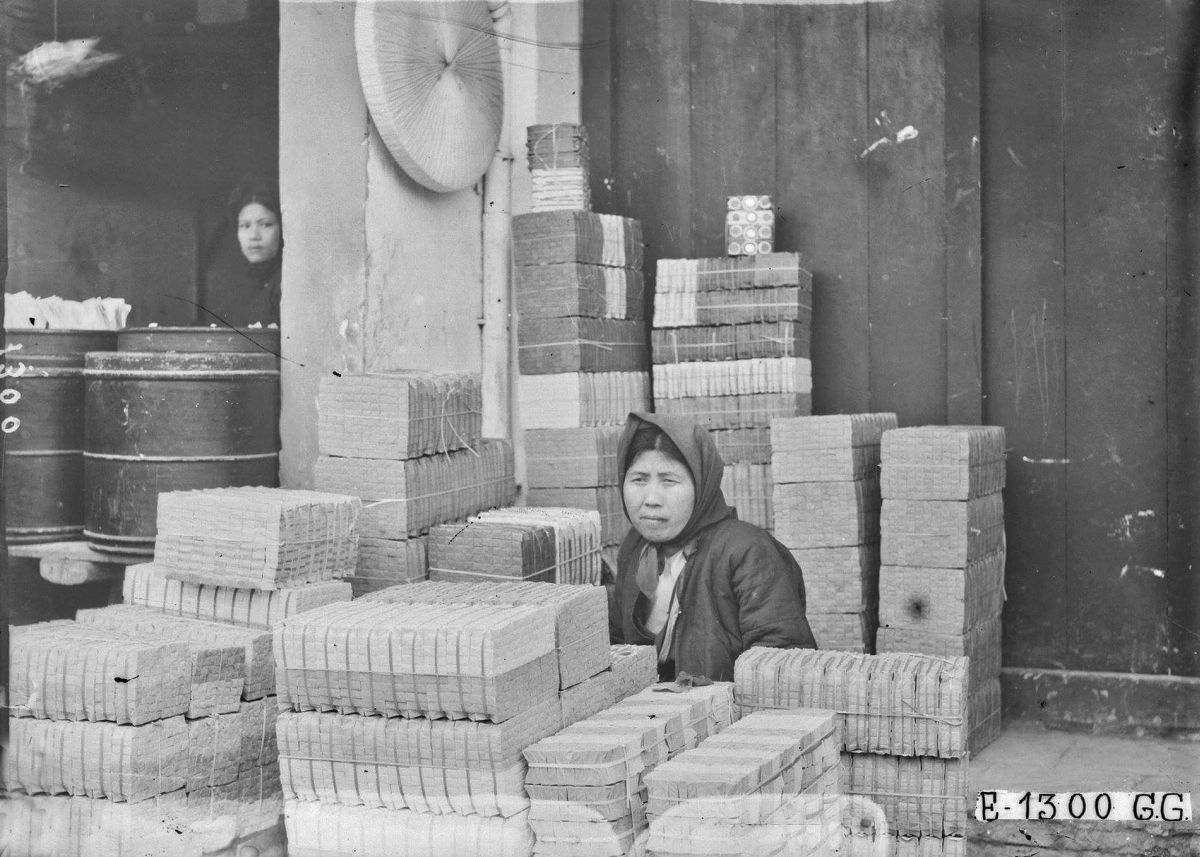 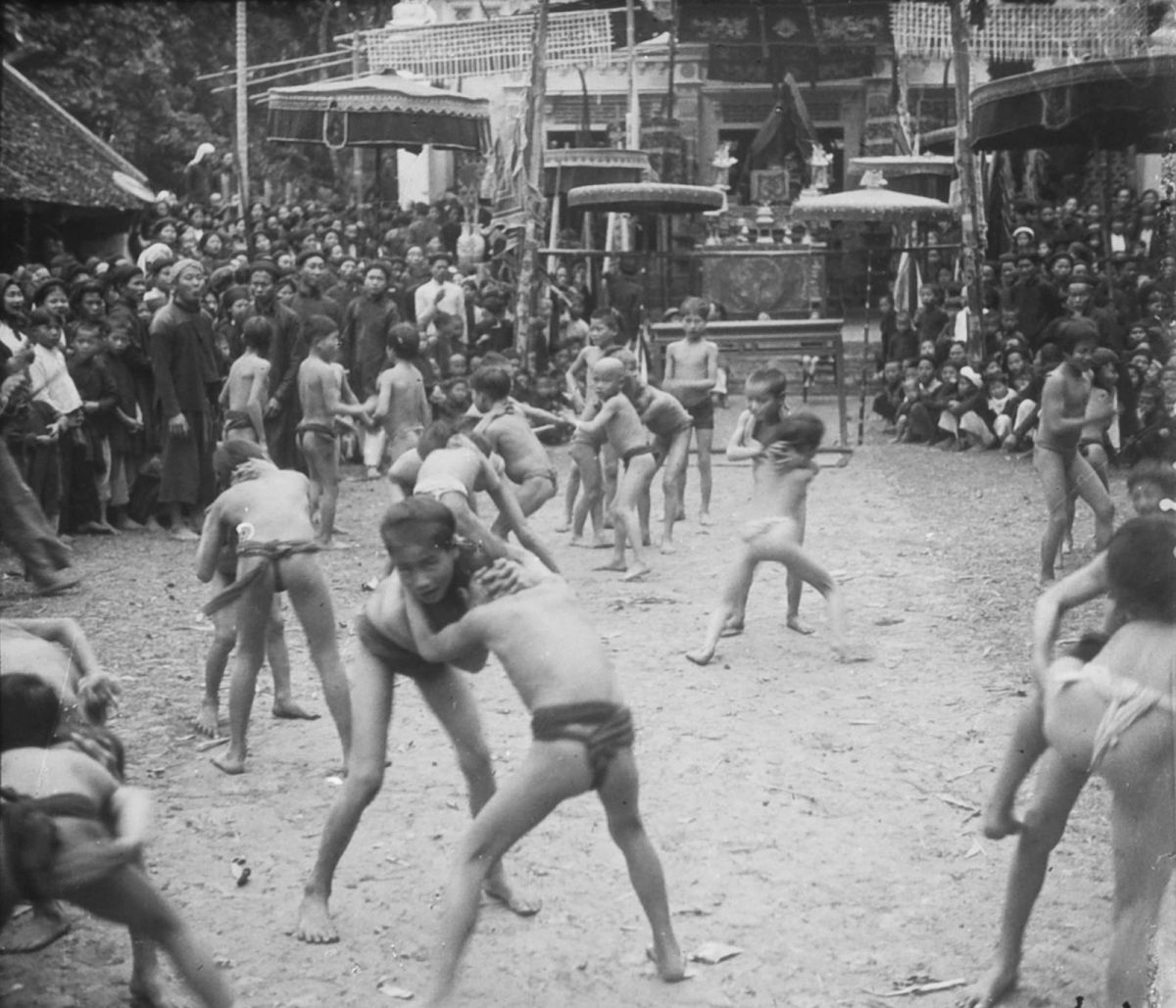 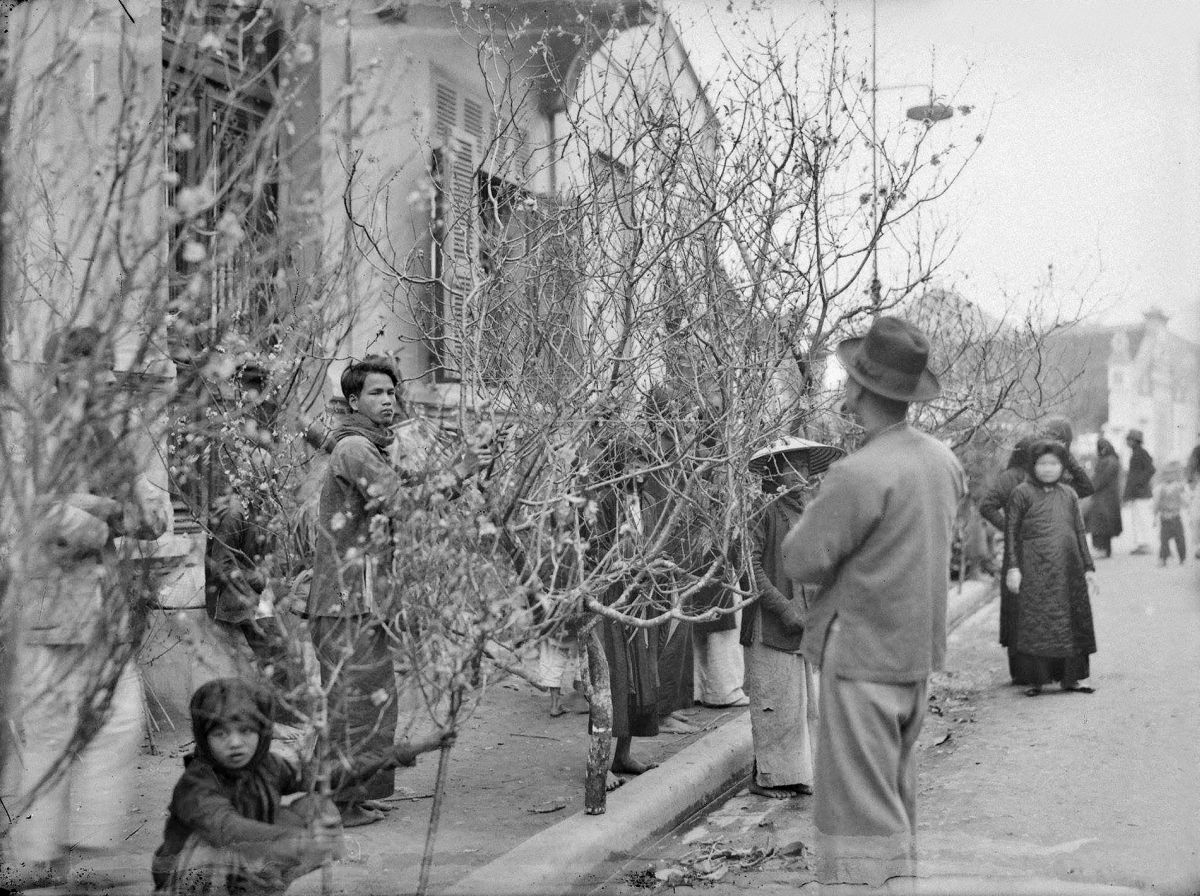 People pick branches of peach blossoms, for long used in the north as the main Tet adornment for the house. Peach blossoms are believed to repel ghosts and demons, and symbolize youth, fertility and hope brought by spring. In the south, the flowers of choice for Tet is the Ochna integerrima, commonly known as the yellow Mai flower. 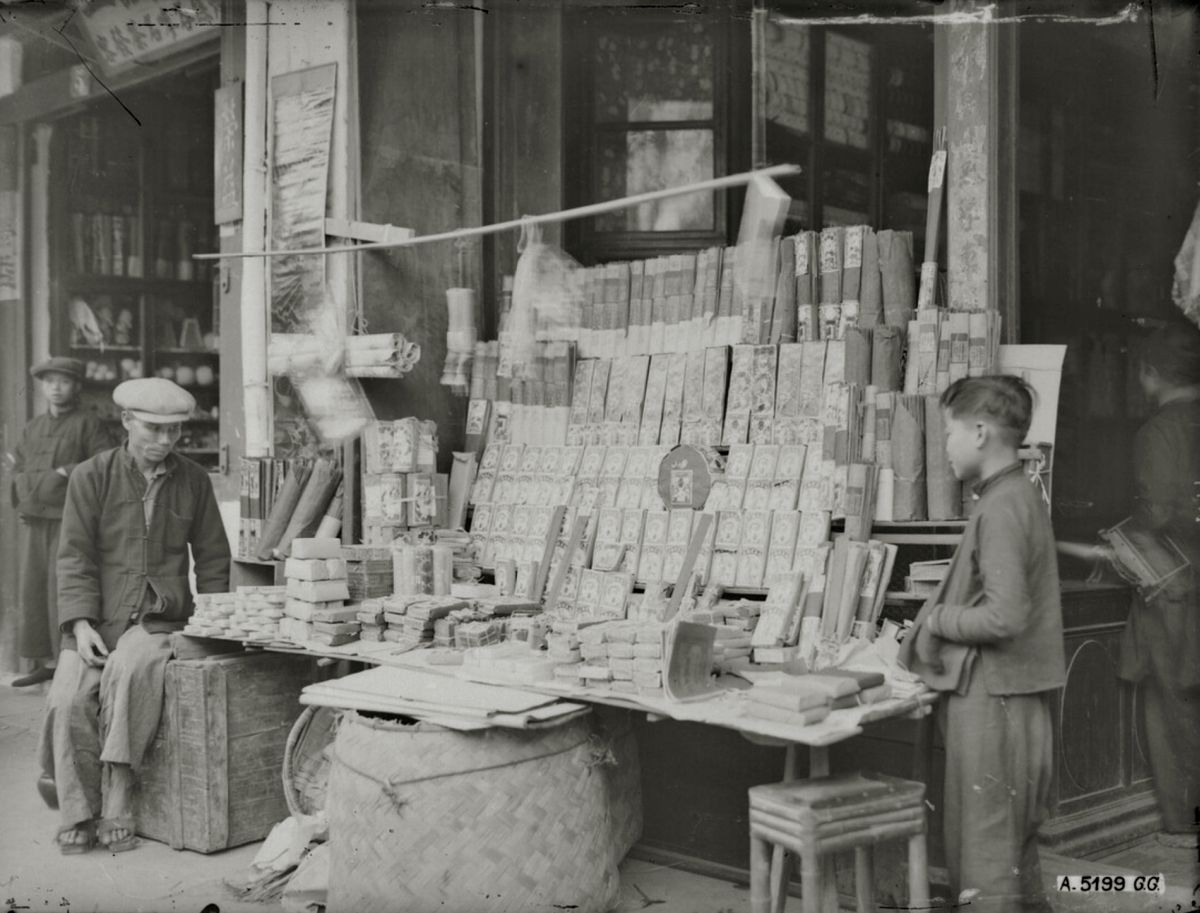 A Hanoi store sells firecrackers and sticks of incense for Tet in 1929. Firecrackers were burst during Tet to repel ghosts and demons, but they were banned by the Vietnamese government in 1995 because the production and explosions were causing too many accidents, deaths and injuries. 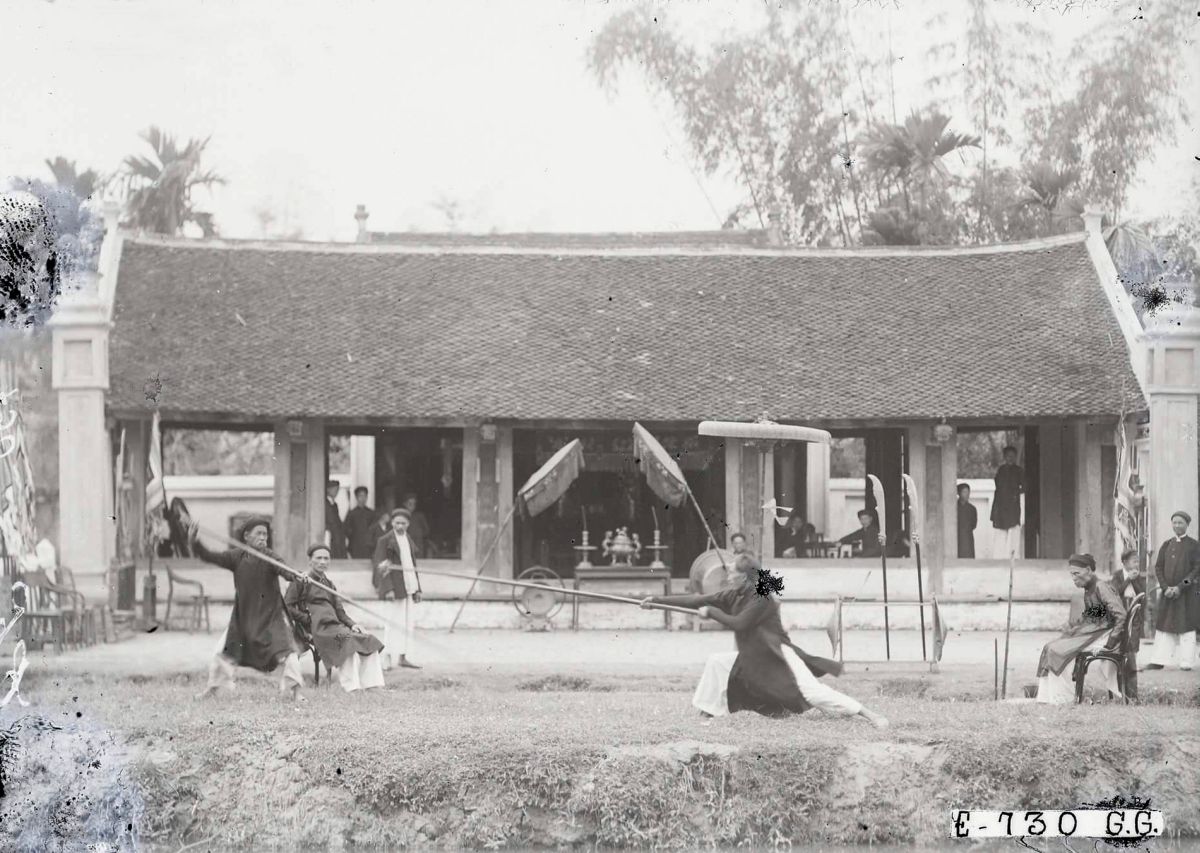 Two people fight, using long wooden poles as lances, as part of Tet celebrations in Hanoi, 1929. This sport, known as la lutte à la lance in French and roi truong in Vietnamese, was a traditional one engaged in during festivals in Vietnam. Combatants score points by hitting their opponents with wooden lances wrapped in fabric at one end, in various body parts. Any player who lets go of his lance automatically loses the match. 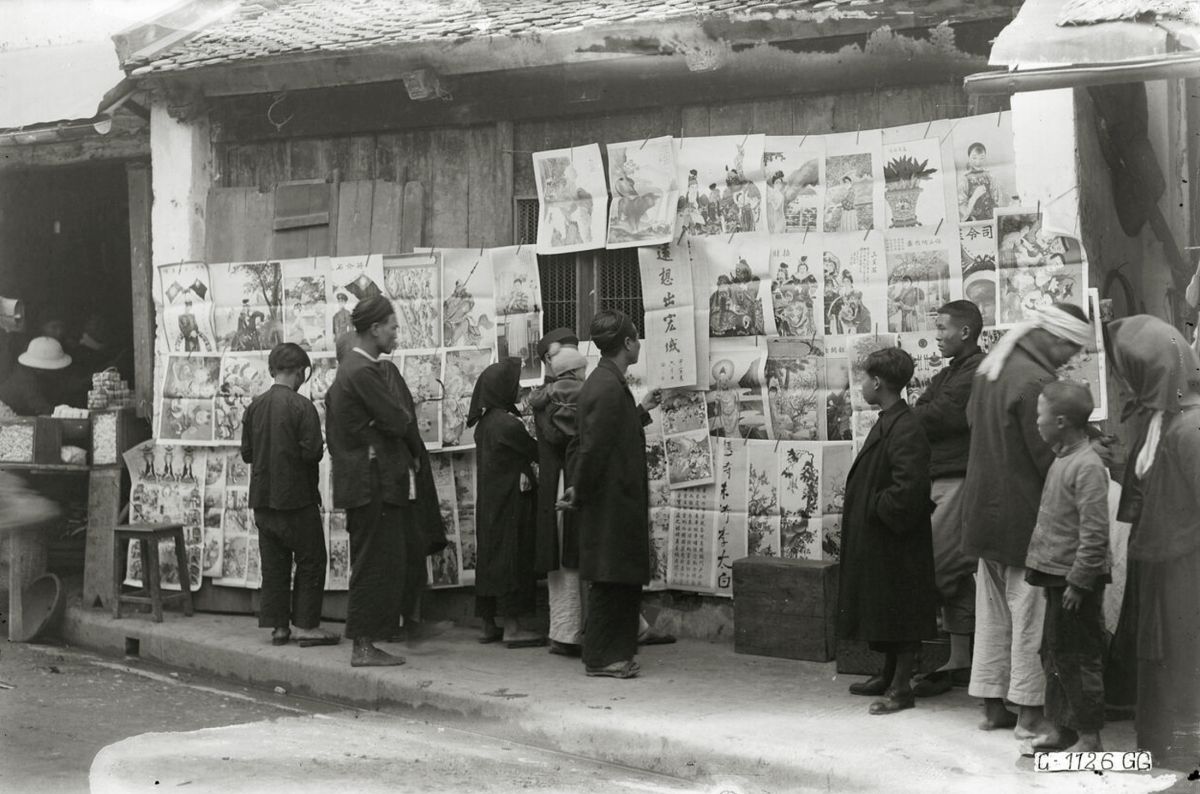 On a Hanoi street, Tet paintings are on sale in 1929. Then, too, Chinese characters, parallel sentences, pictures of flowers, carps, dragons and other, more modern subjects were sold as wall hangings to invite luck into a house for the Lunar New Year. 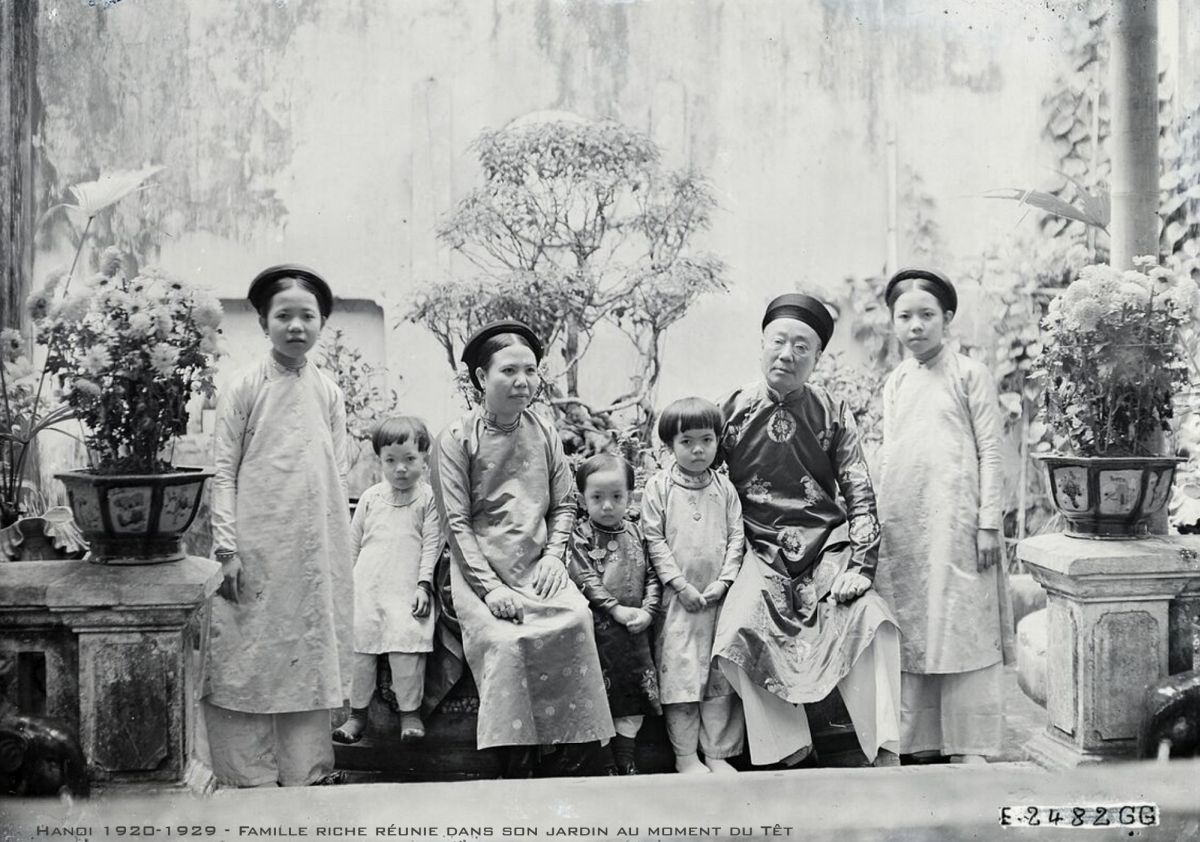 A Hanoi family poses for a picture as part of Tet celebrations. 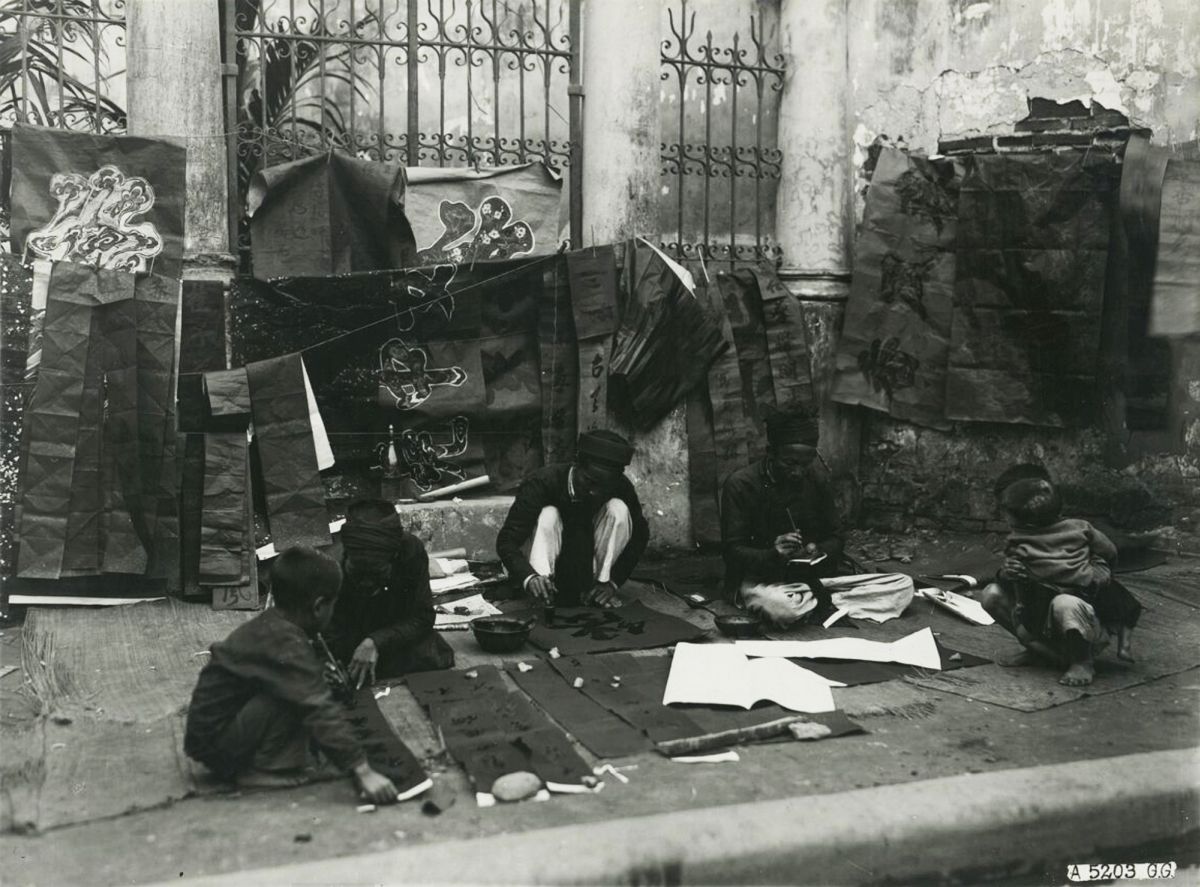 Young kids help out and watch as an ong do, a Vietnamese calligrapher, writes Chinese or Han characters on red paper to be used as a house decoration for Tet. 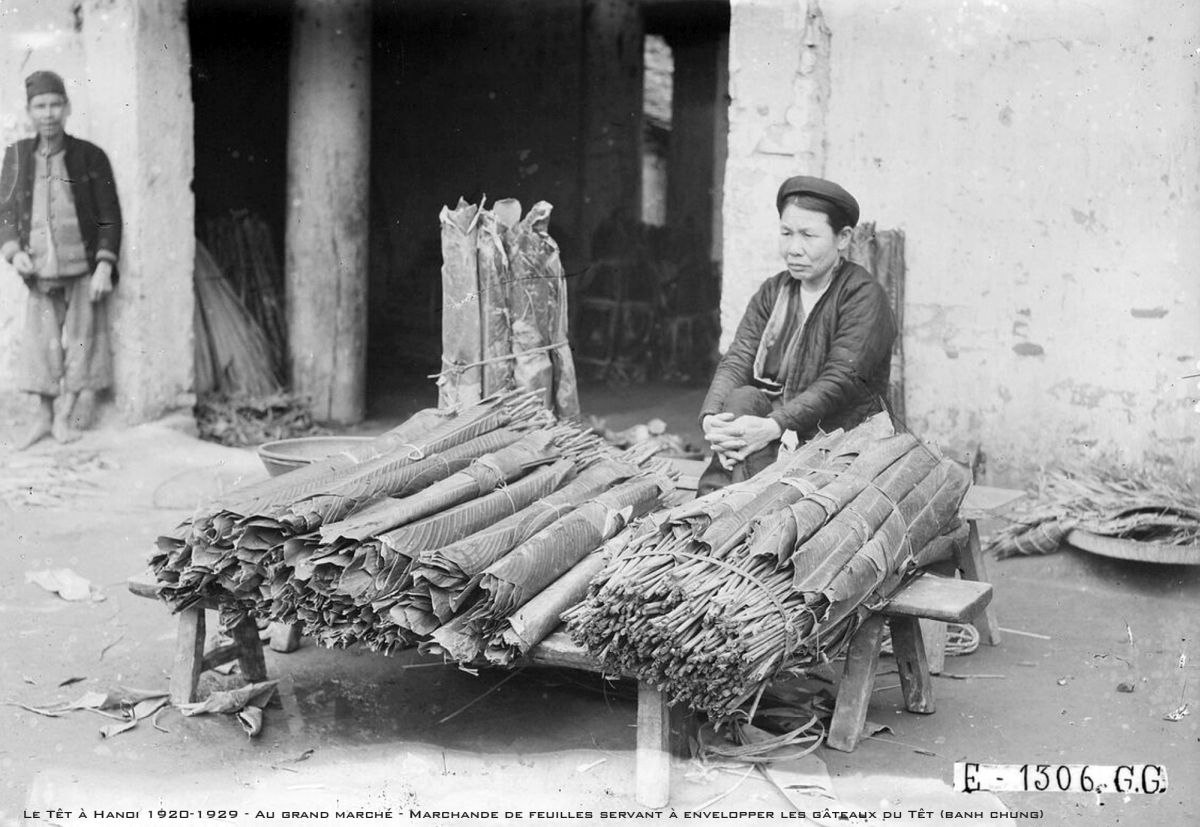 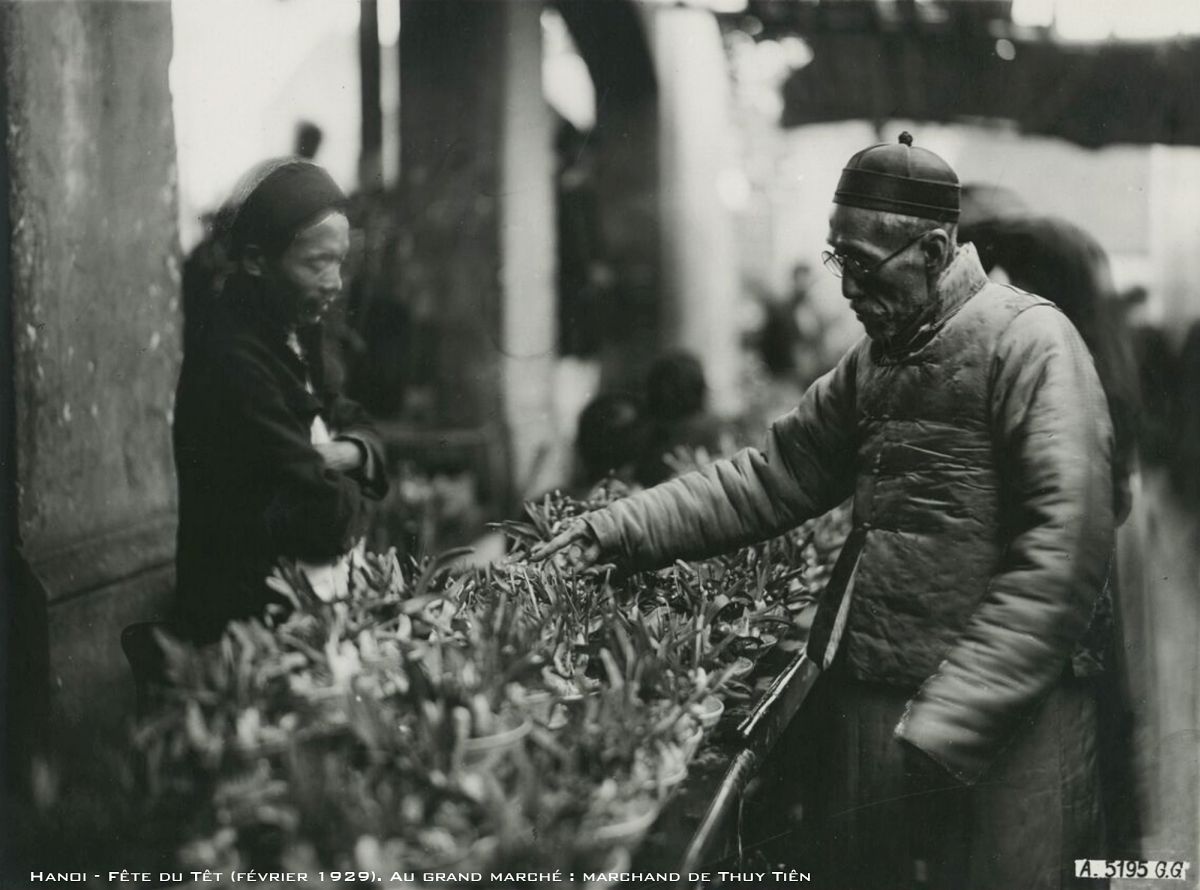 An old man chooses a daffodil as a Tet decoration. Daffodils are believed to awaken one’s hidden potential, including talent and creativity. They also represent rejuvenation, chivalry and generosity. However, they are not so prevalent as a Tet decoration as they once were. 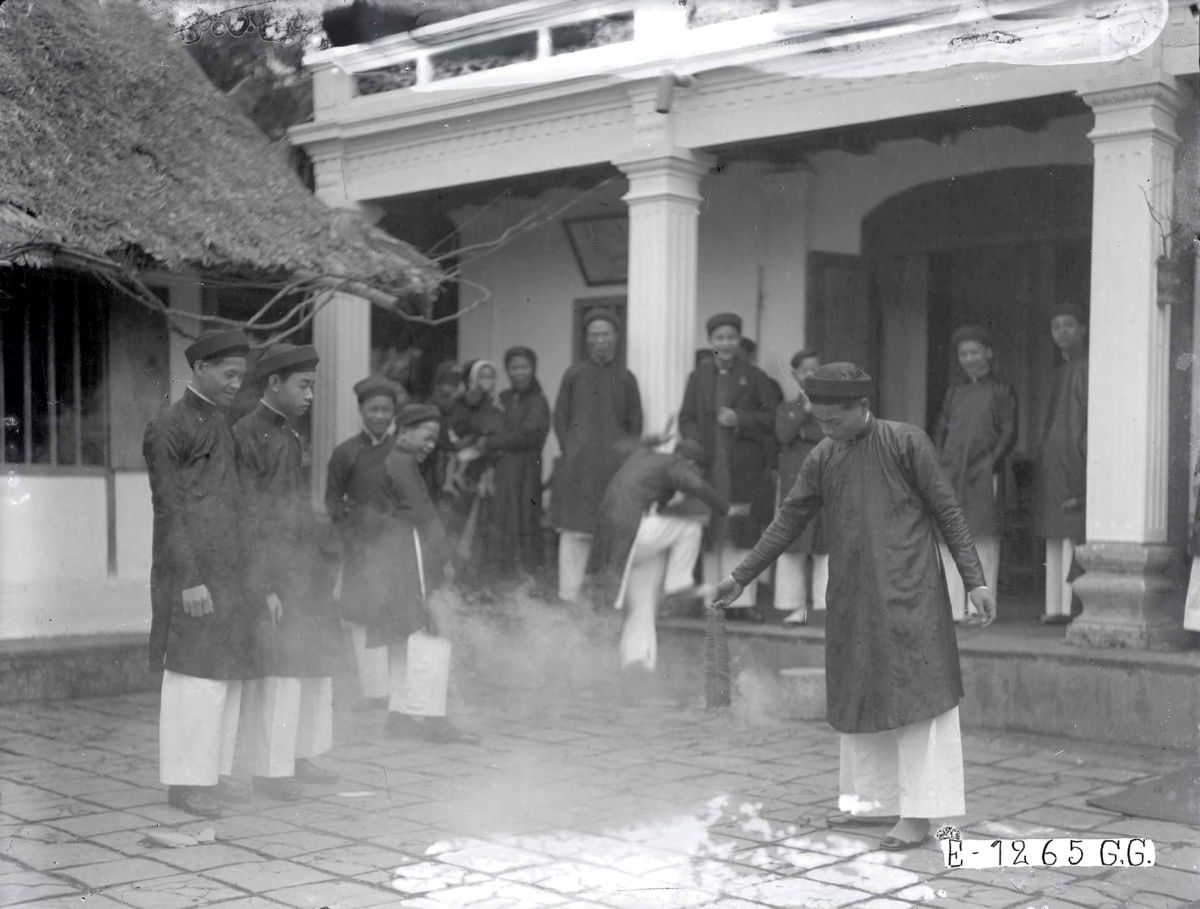 A man lights firecrackers in his family’s yard during Tet.