Riefenstahl heard Nazi Party (NSDAP) leader Adolf Hitler speak at a rally in 1932 and was mesmerized by his talent as a public speaker. Describing the experience in her memoir, Riefenstahl wrote, “I had an almost apocalyptic vision that I was never able to forget. It seemed as if the Earth’s surface were spreading out in front of me, like a hemisphere that suddenly splits apart in the middle, spewing out an enormous jet of water, so powerful that it touched the sky and shook the earth”.

Riefenstahl eventually came to the notice of Hitler who was immediately captivated by her work. She is described as fitting in with Hitler’s ideal of Aryan womanhood, a feature he had noted when he saw her starring performance in Das Blaue Licht. After meeting Hitler, Riefenstahl was offered the opportunity to direct Der Sieg des Glaubens (“The Victory of Faith”), an hour-long propaganda film about the fifth Nuremberg Rally in 1933. The opportunity that was offered was a huge surprise to Riefenstahl. Hitler had ordered Goebbels Propaganda Ministry to give the film commission to Riefenstahl, but the Ministry had never informed her. Riefenstahl agreed to direct the movie even though she was only given a few days before the rally to prepare. She and Hitler got on well, forming a friendly relationship. The propaganda film was funded entirely by the NSDAP.

During the filming of Victory of Faith, Hitler had stood side by side with the leader of the Sturmabteilung (SA) Ernst Röhm, a man with whom he clearly had a close working relationship. Röhm was ruthlessly murdered on Hitler’s orders a short time later during the purge of the SA referred to as the Night of the Long Knives. It has gone on record that, immediately following the killings, Hitler ordered all copies of the film to be destroyed, although Riefenstahl disputes that this ever happened.

Still impressed with Riefenstahl’s work, Hitler asked her to film Triumph des Willens (“Triumph of the Will”), a new propaganda film about the 1934 party rally in Nuremberg. More than one million Germans participated in the rally. The film is sometimes considered the greatest propaganda film ever made. Initially, according to Riefenstahl, she resisted and did not want to create further Nazi Party films, instead wanting to direct a feature film based on Eugen d’Albert’s Tiefland (“Lowlands”), an opera that was extremely popular in Berlin in the 1920s. Riefenstahl received private funding for the production of Tiefland, but the filming in Spain was derailed and the project was cancelled. Tiefland was shot in black and white, and was the third most expensive film produced during the Third Reich. During the filming of Tiefland, she utilized gypsies from internment camps for extras, who were severely mistreated on set, and when the filming completed they were sent to Auschwitz. Hitler was able to convince her to film Triumph des Willens on the condition that she would not be required to make further films for the party, according to Riefenstahl. The motion picture was generally recognized as an epic, innovative work of propaganda filmmaking. The film took Riefenstahl’s career to a new level and gave her further international recognition.

In interviews for the 1993 documentary The Wonderful, Horrible Life of Leni Riefenstahl, Riefenstahl adamantly denied any deliberate attempt to create Nazi propaganda and said she was disgusted that Triumph des Willens was used in such a way. 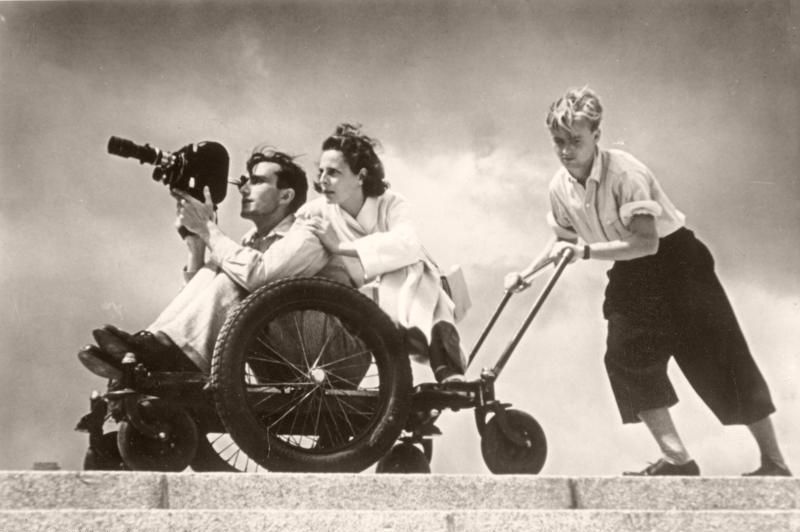 Riefenstahl filming a difficult scene with the help of two assistants, 1936 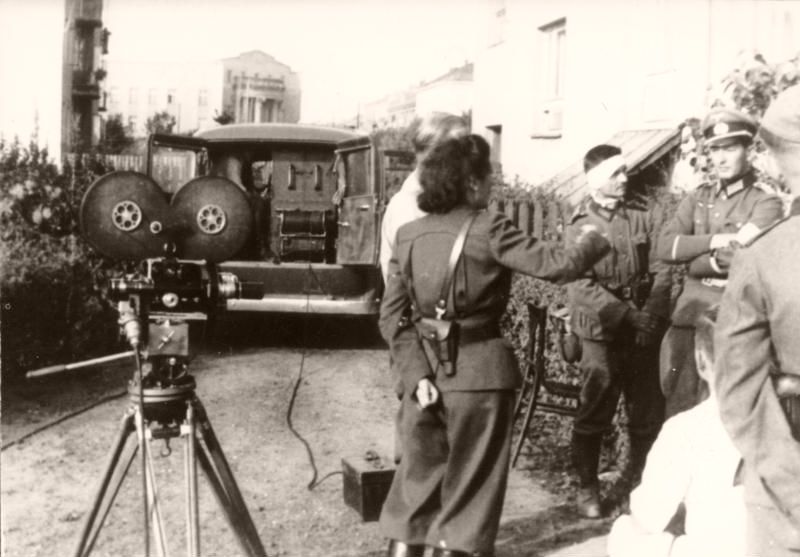 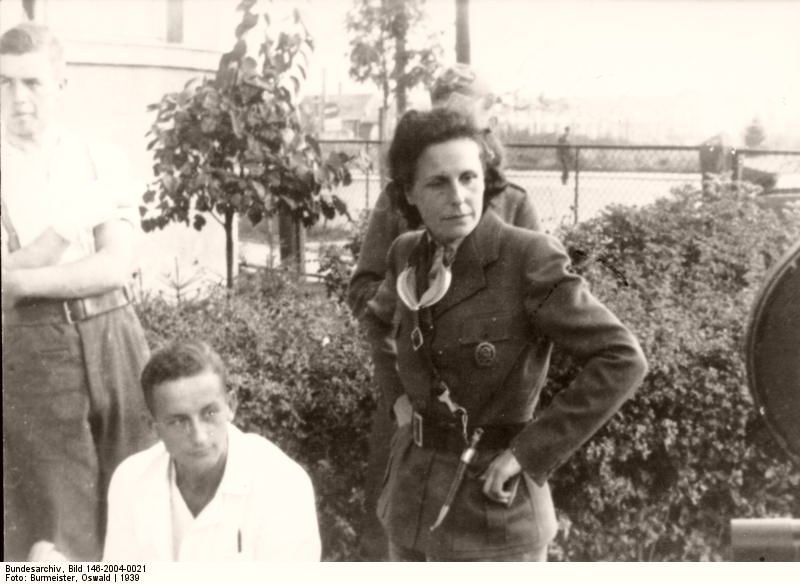 Riefenstahl as a war correspondent in Poland, 1939 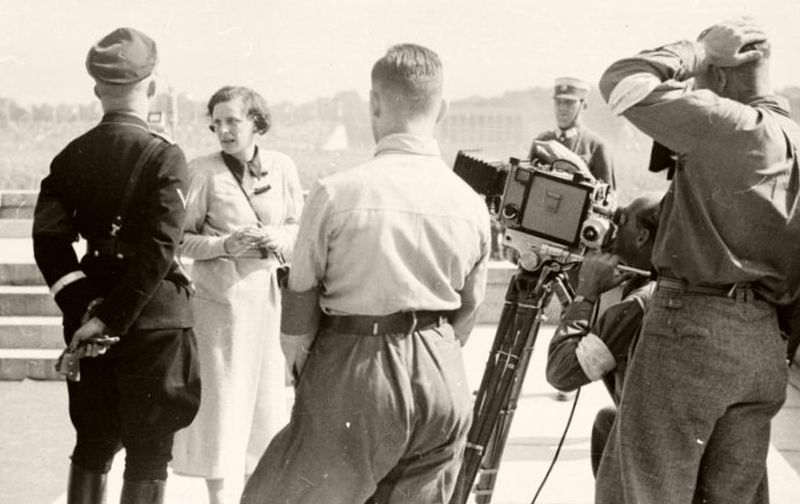 Riefenstahl stands near Heinrich Himmler while instructing her camera crew at Nuremberg, 1934 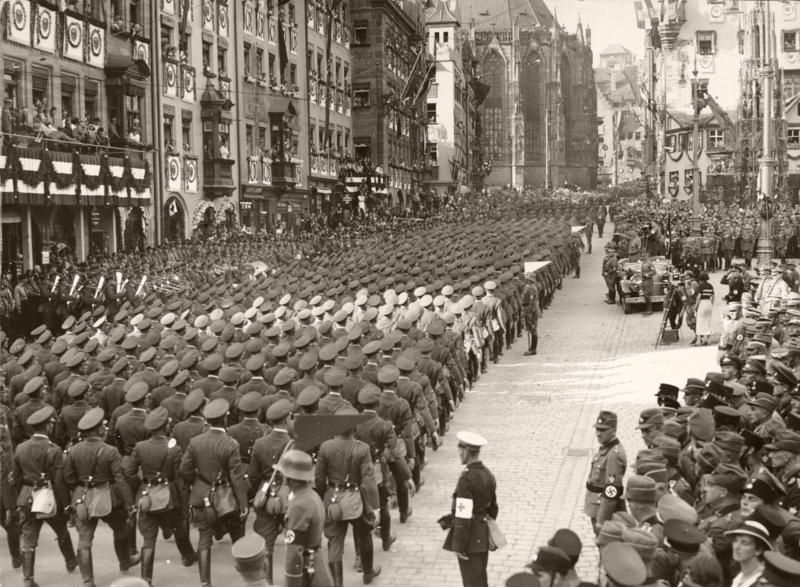 Riefenstahl and a camera crew stand in front of Hitler’s car during the 1934 rally in Nuremberg. 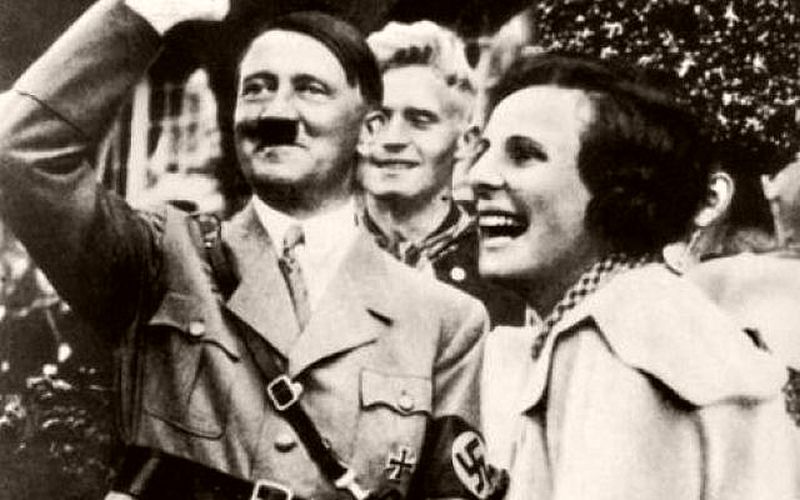 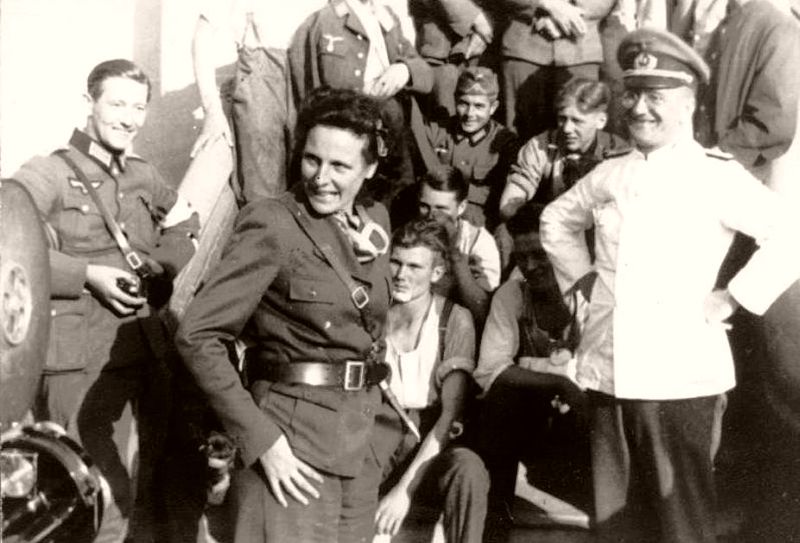 Leni Riefenstahl, dressed in a Wehrmacht uniform, during her brief stint as a war correspondent covering Germany’s invasion of Poland in 1939 (public domain) 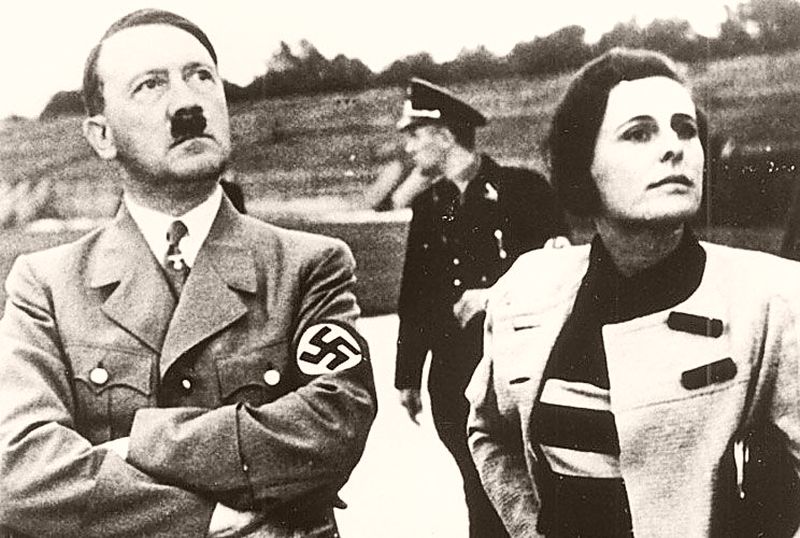 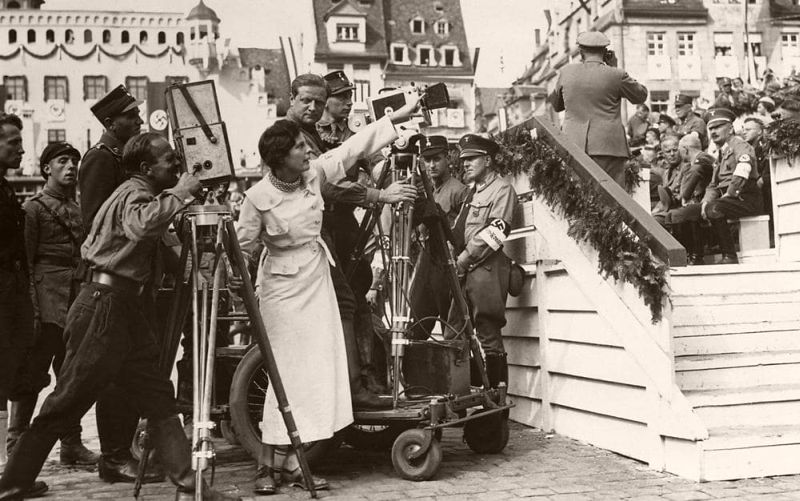 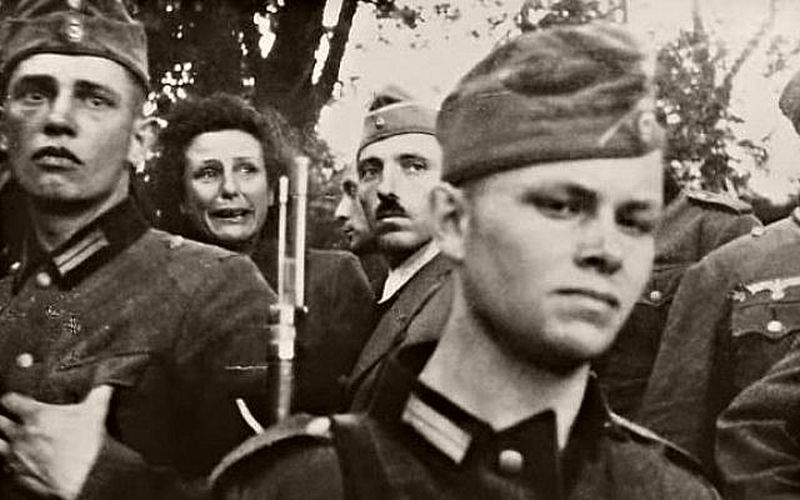 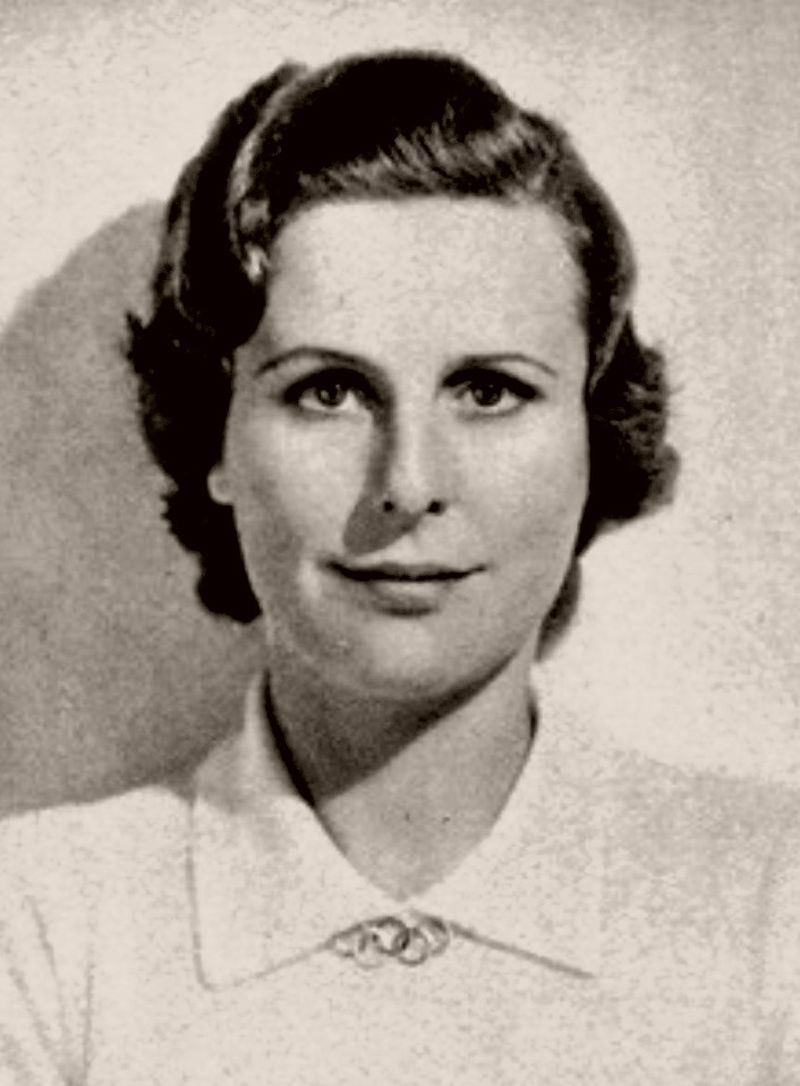 (from a 1930s postcard honoring Riefenstahl for the propaganda film, Olympia)