Due to Coney Island’s proximity to Manhattan and other boroughs, and its simultaneous relative distance from the city of Brooklyn to provide the illusion of a proper vacation, it began attracting vacationers in the 1830s and 1840s, assisted by carriage roads and steamship service that reduced travel time from a formerly half-day journey to two hours. Most of the vacationers were wealthy and went by carriage. Inventor Samuel Colt built an observation tower on the peninsula in 1845, but he abandoned the project soon after. In 1847, the middle class started going to Coney Island upon the introduction of a ferry line to Norton’s Point—named after hotel owner Michael Norton—at the western portion of the peninsula. Gang activity started as well, with one 1870s writer noting that going to Coney Island could result in losing money and even lives. The Brooklyn, Bath and Coney Island Railroad became the first railroad to reach Coney Island when it opened in 1864, and it was completed in 1867.

In 1868, William A. Engeman built a resort in the area. The resort was given the name “Brighton Beach” in 1878 by Henry C. Murphy and a group of businessmen, who chose to name as an allusion to the English resort city of Brighton. With the help of Gravesend’s surveyor William Stillwell, Engeman acquired all 39 lots for the relatively low cost of $20,000. This 460-by-210-foot (140 by 64 m) hotel, with rooms for up to 5,000 people nightly and meals for up to 20,000 people daily, was close to the then-rundown western Coney Island, so it was mostly the upper middle class that went to this hotel. The 400-foot (120 m), double-decker Brighton Beach Bathing Pavilion was also built nearby and opened in 1878, with the capacity for 1,200 bathers. “Hotel Brighton”, also known as the “Brighton Beach Hotel”, was situated on the beach at what is now the foot of Coney Island Avenue. The Brooklyn, Flatbush, and Coney Island Railway, the predecessor to the New York City Subway’s present-day Brighton Line, opened on July 2, 1878, and provided access to the hotel.

Simultaneously, wealthy banker August Corbin was developing adjacent Manhattan Beach after being interested in the area during a trip to the beach to heal his sick son.Corbin, who worked on Wall Street and had many railroad investments, built the New York and Manhattan Beach Railway for his two luxury shoreline hotels. These hotels were used by the wealthy upper class, who would not go to Brighton Beach because of its proximity to Coney Island. The 150-room Manhattan Beach Hotel—which was designed by J. Pickering Putnam and contained restaurants, ballrooms, and shops—was opened for business in July 1877 at a ceremony presided over by President Ulysses S. Grant. The similarly prodigal Oriental Hotel, which hosted rooms for wealthy families staying for extended periods, was opened in August 1880.

Andrew R. Culver, president of the Prospect Park and Coney Island Railroad, had built a steam railway to West Brighton, the Culver Line, before Corbin and Engeman had even built their railroads. For 35 cents, one could ride the Prospect Park & Coney Island Railroad to the Culver Depot terminal at Surf Avenue. Across the street from the terminal, the 300-foot (91 m) Iron Tower, bought from the 1876 Philadelphia Exposition, provided patrons with a bird’s-eye view of the coast. The nearby “Camera Obscura” similarly used mirrors and lens to provide a panoramic view of the area. Coney Island became a major resort destination after the Civil War as excursion railroads and the Coney Island & Brooklyn Railroad streetcar line reached the area in the 1860s and 1870s, followed by the Iron Steamboat Company ferry to Manhattan in 1881.
Dreamland tower and lagoon in 1907

The 150-suite Cable Hotel was built nearby in 1875. Next to it, on a 12-acre (4.9 ha) piece of land leased by James Voorhies, maitre d’ Paul Bauer built the western peninsula’s largest hotel, which opened in 1876. By the turn of the century, Victorian hotels, private bathhouses, and vaudeville theaters were a common sight on Coney island. The three resort areas—Brighton Beach, Manhattan Beach and West Brighton—competed with each other for clientele, with West Brighton gradually becoming the most popular destination by the early 1900s.

In the 1890s, Norton’s Point on the western side of Coney Island was developed into Sea Gate, a gated summer community that catered mainly to the wealthy. A private yacht carried visitors directly from the Battery at the southern tip of Manhattan Island. Notable tenants within the community included the Atlantic Yacht Club, which built a colonial style house along the waterfront. 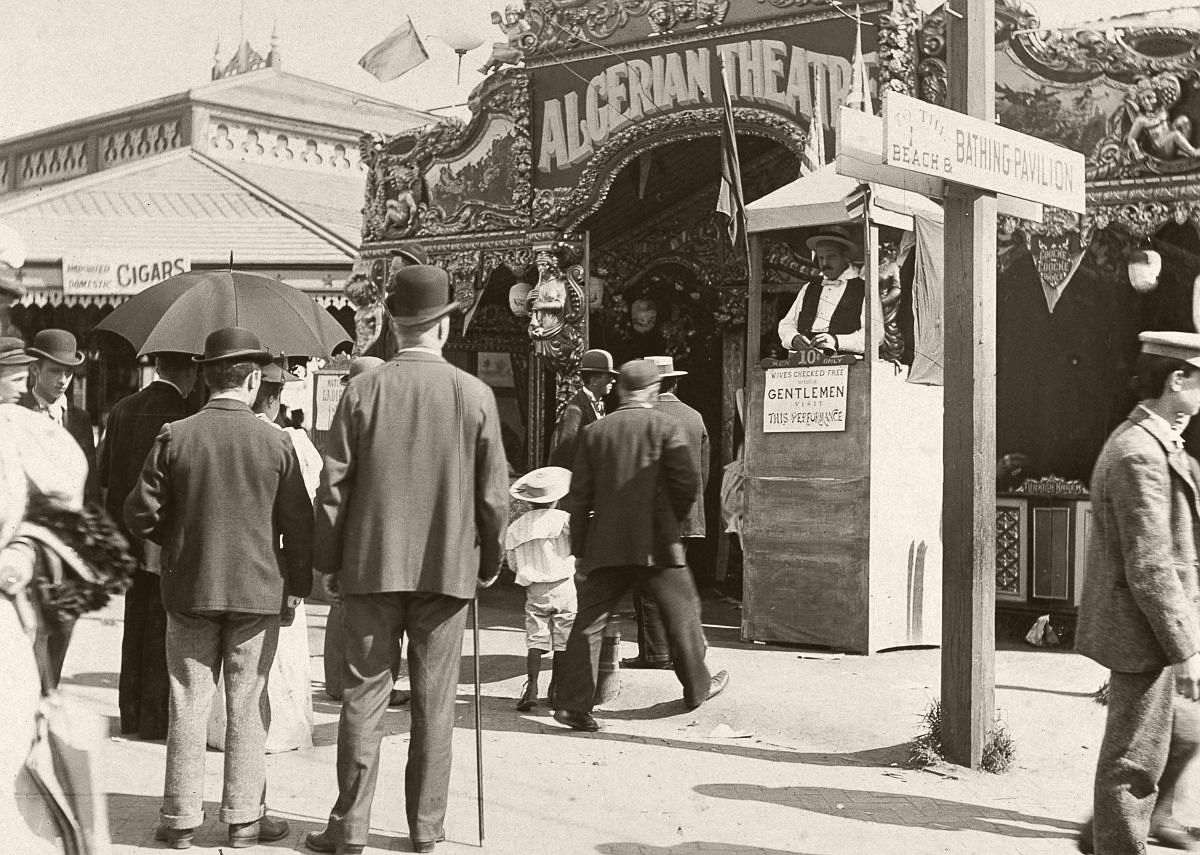 People approach the ticket booth of the Algerian Theatre on the Coney Island boardwalk, 1896. 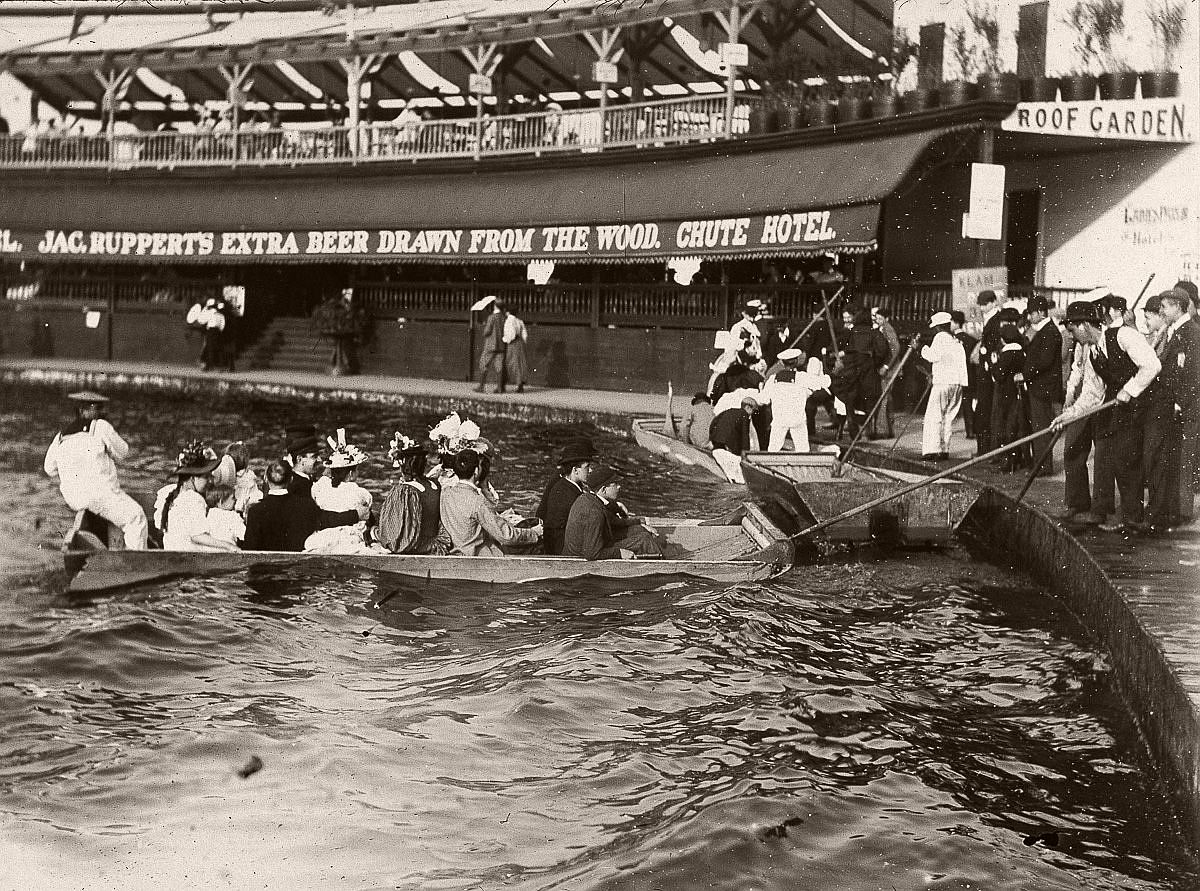 An attendant hooks a barge full of passengers on the water chute ride at the Coney Island amusement park, 1896. 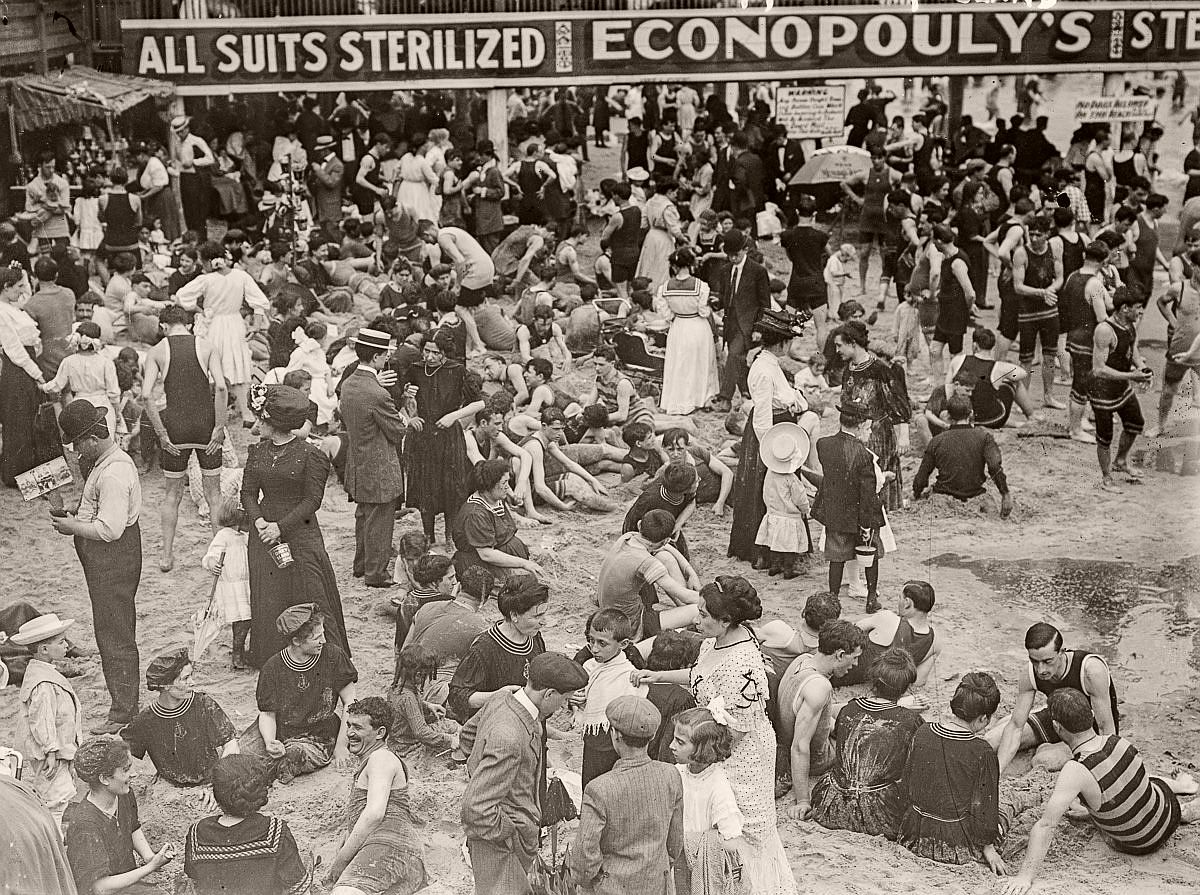 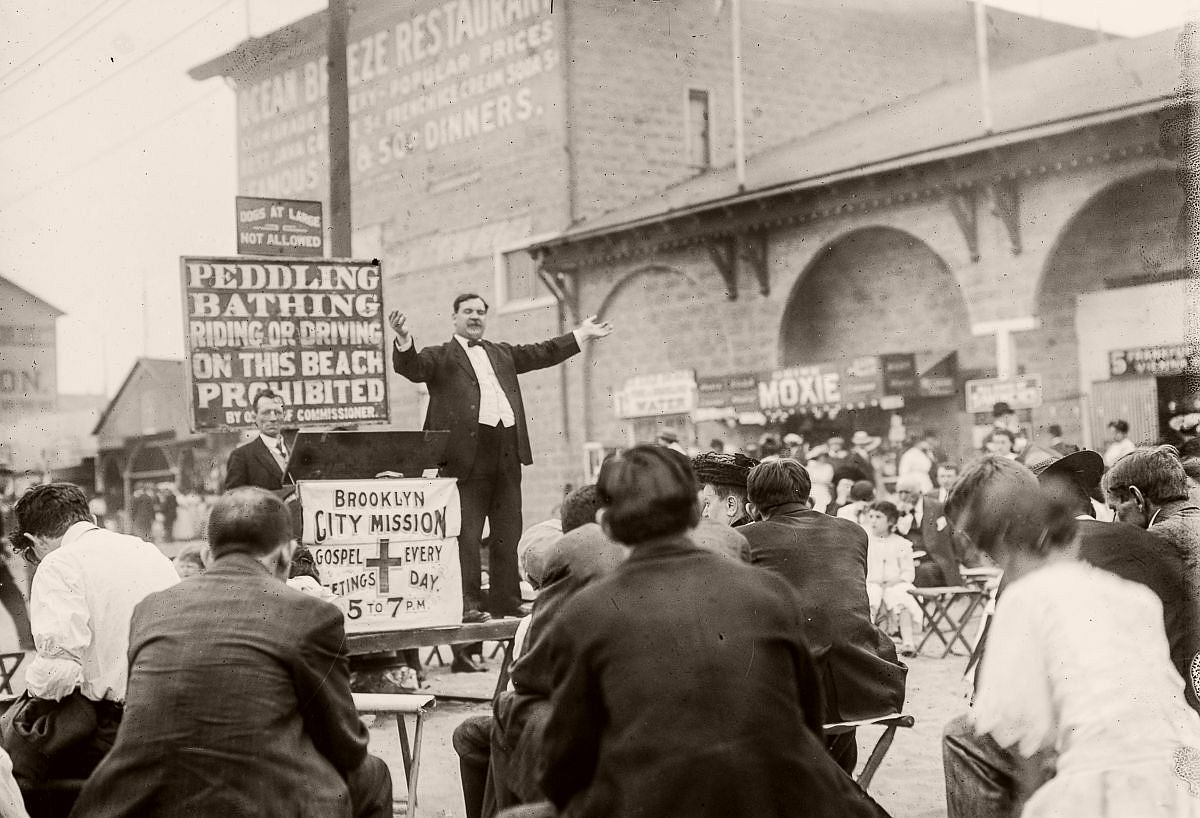 A street preacher proselytizes to revelers on the boardwalk, c.1900. 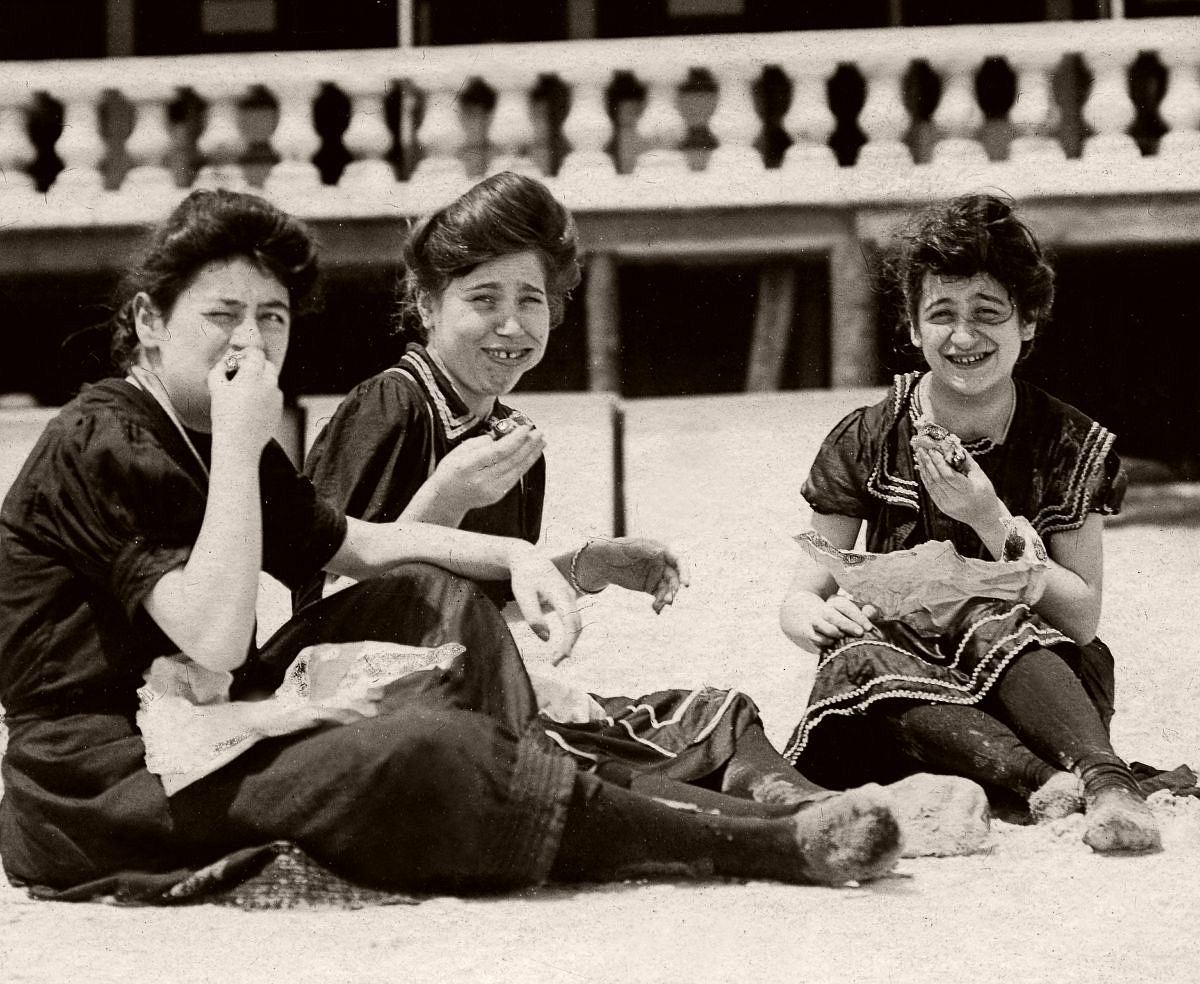 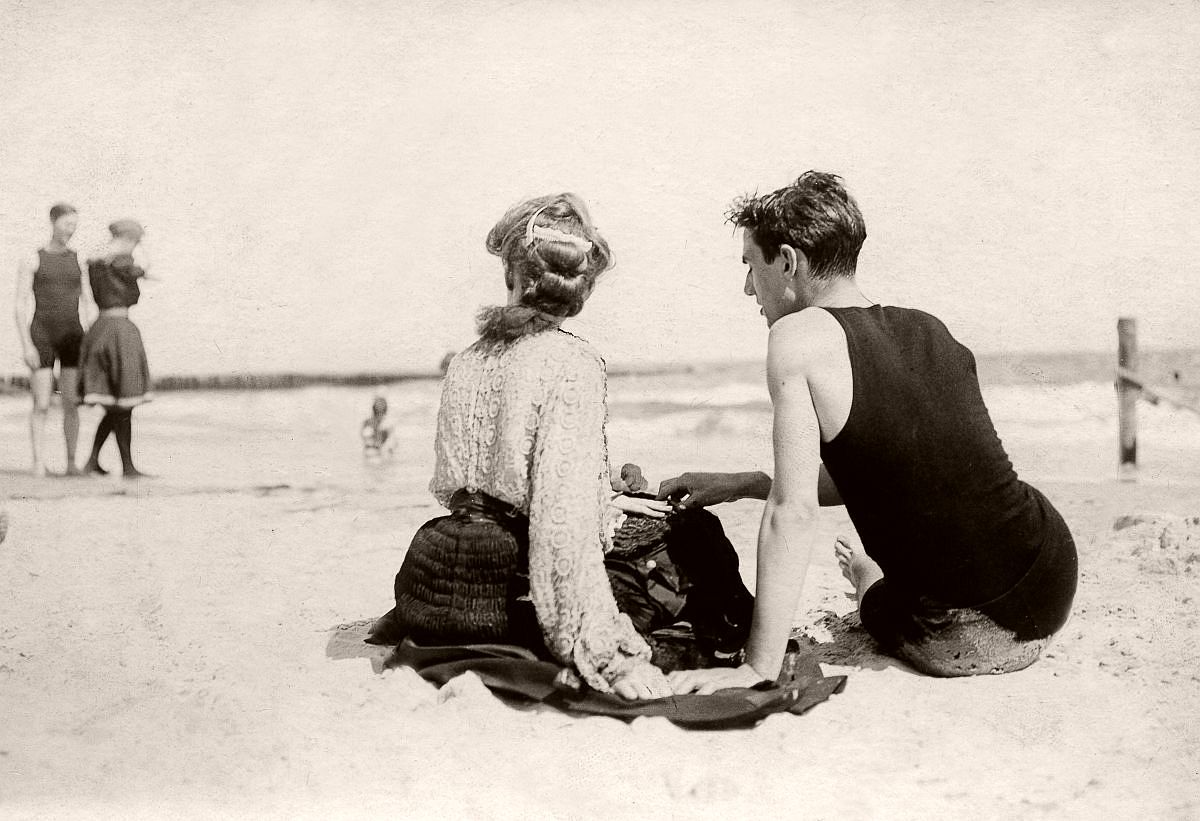 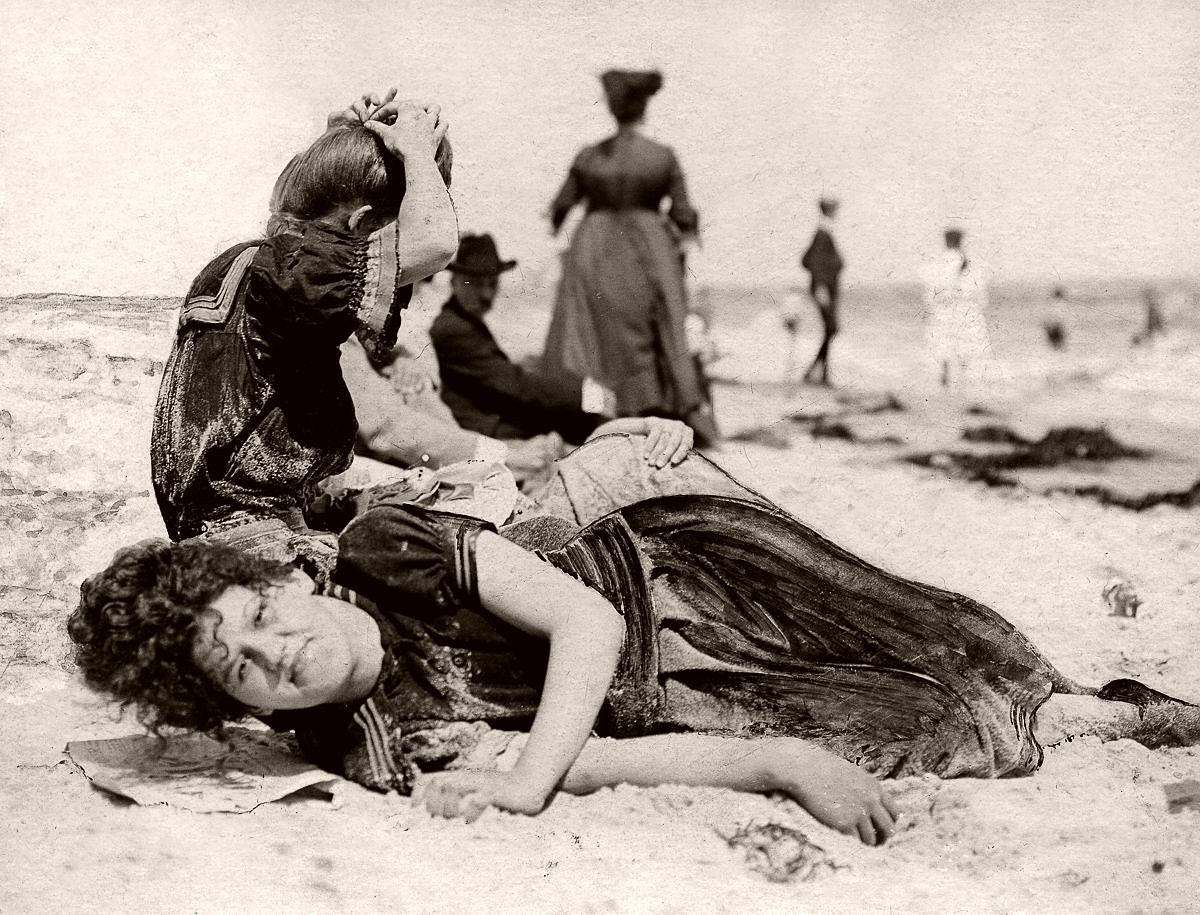 A young bather’s nap is interrupted by a photographer, 1904. 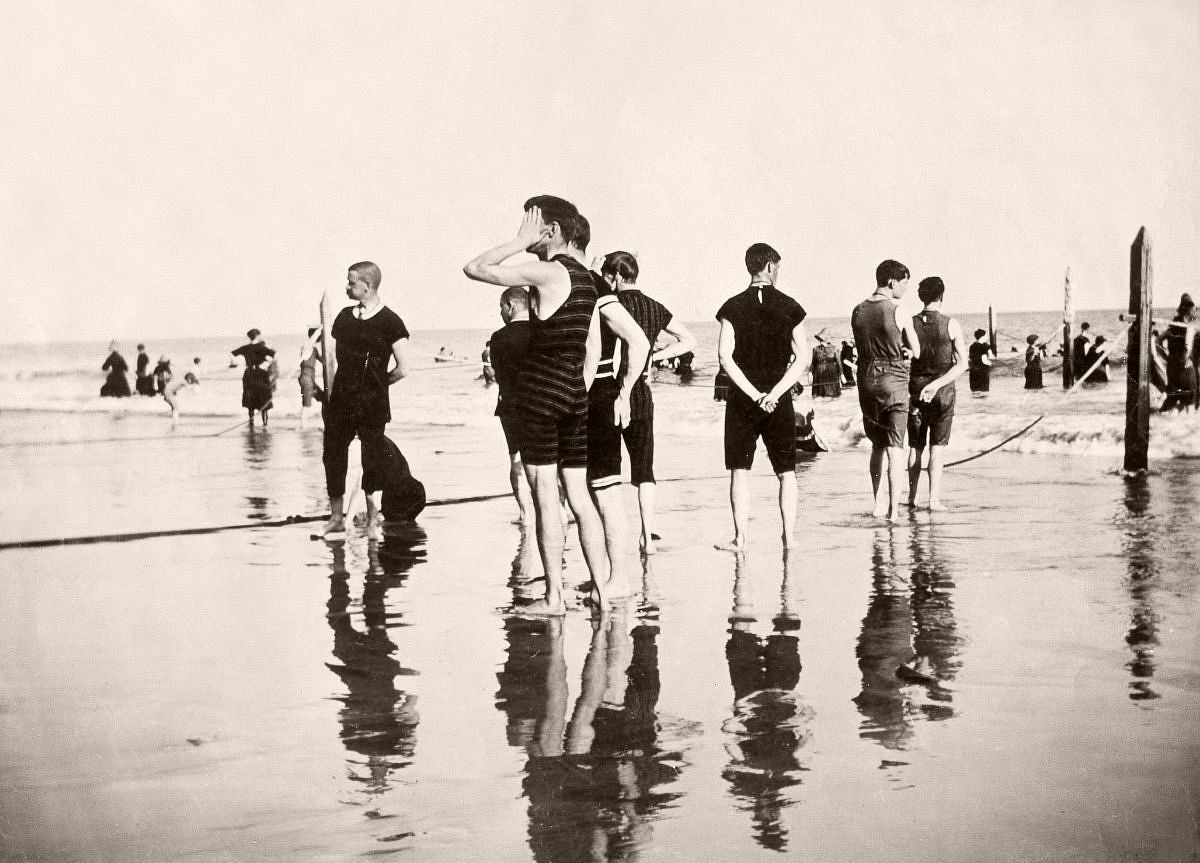 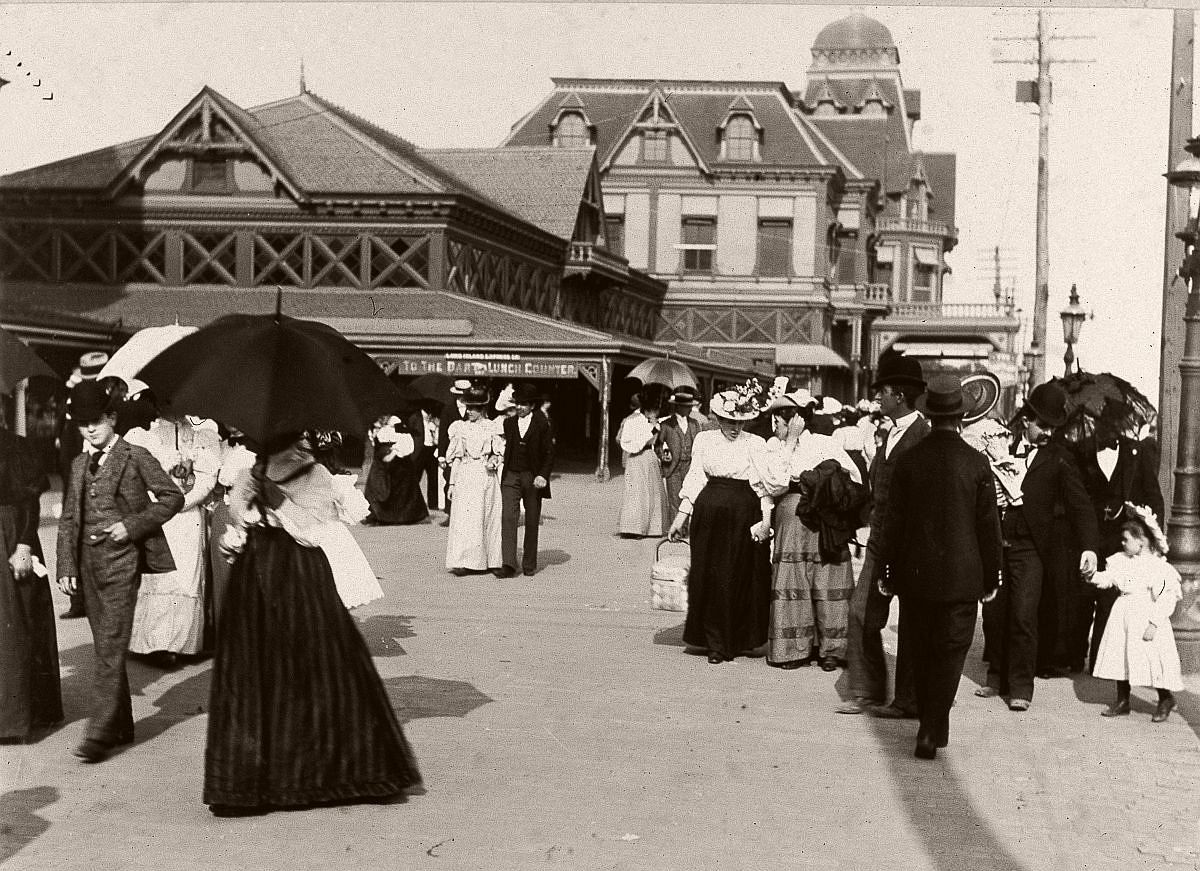 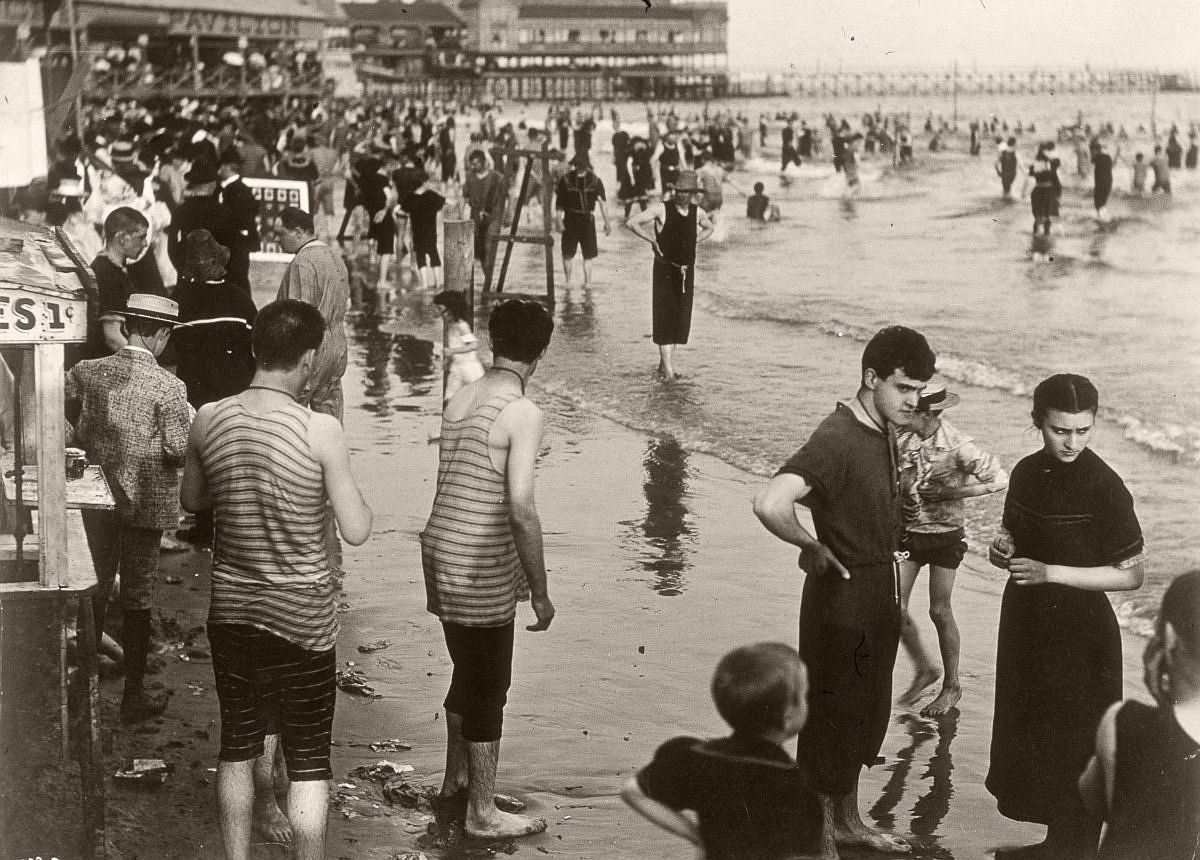 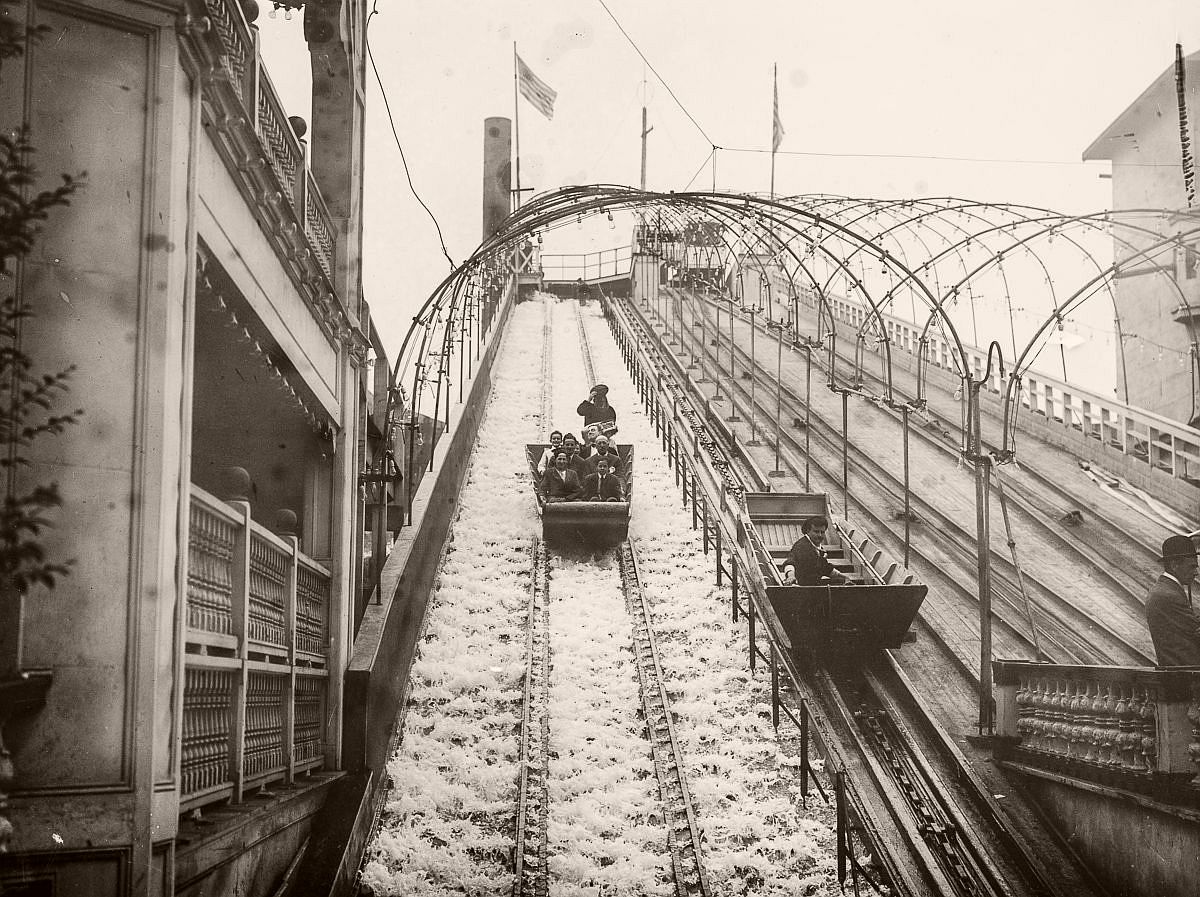 Thrillseekers ride the water chute at the amusement park, c.1900. 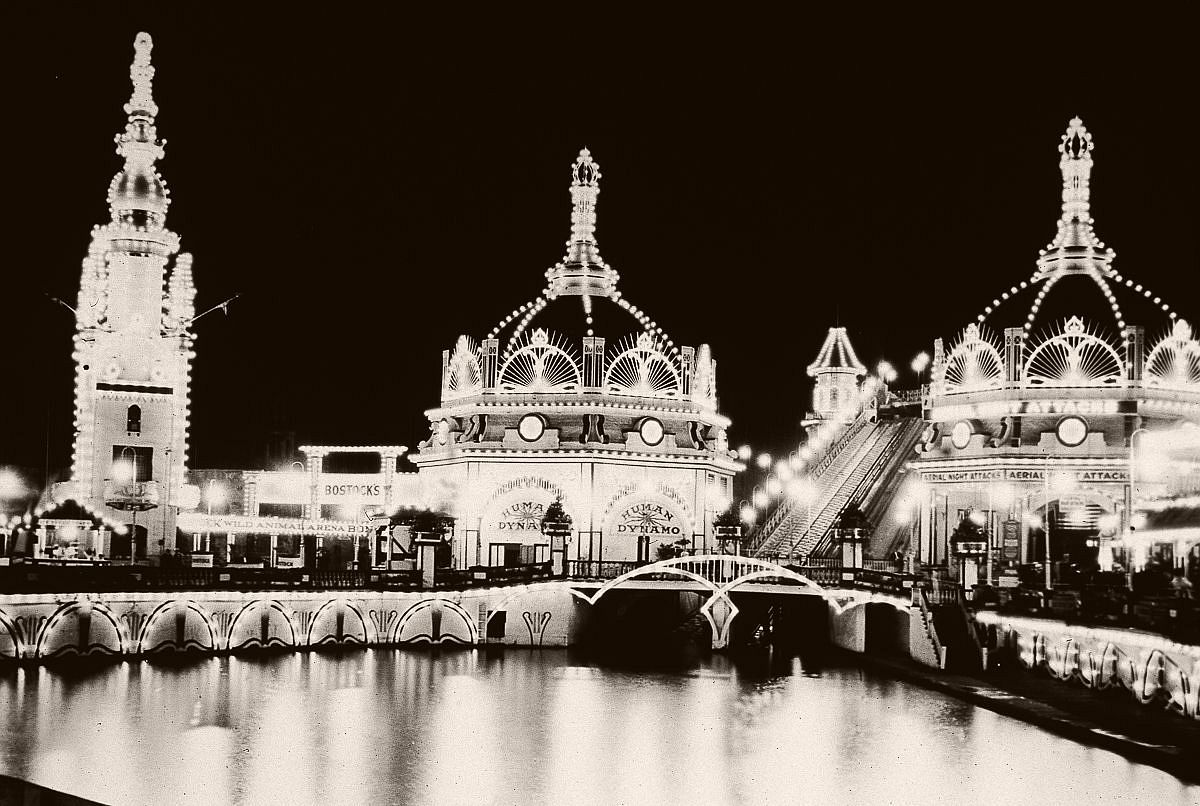 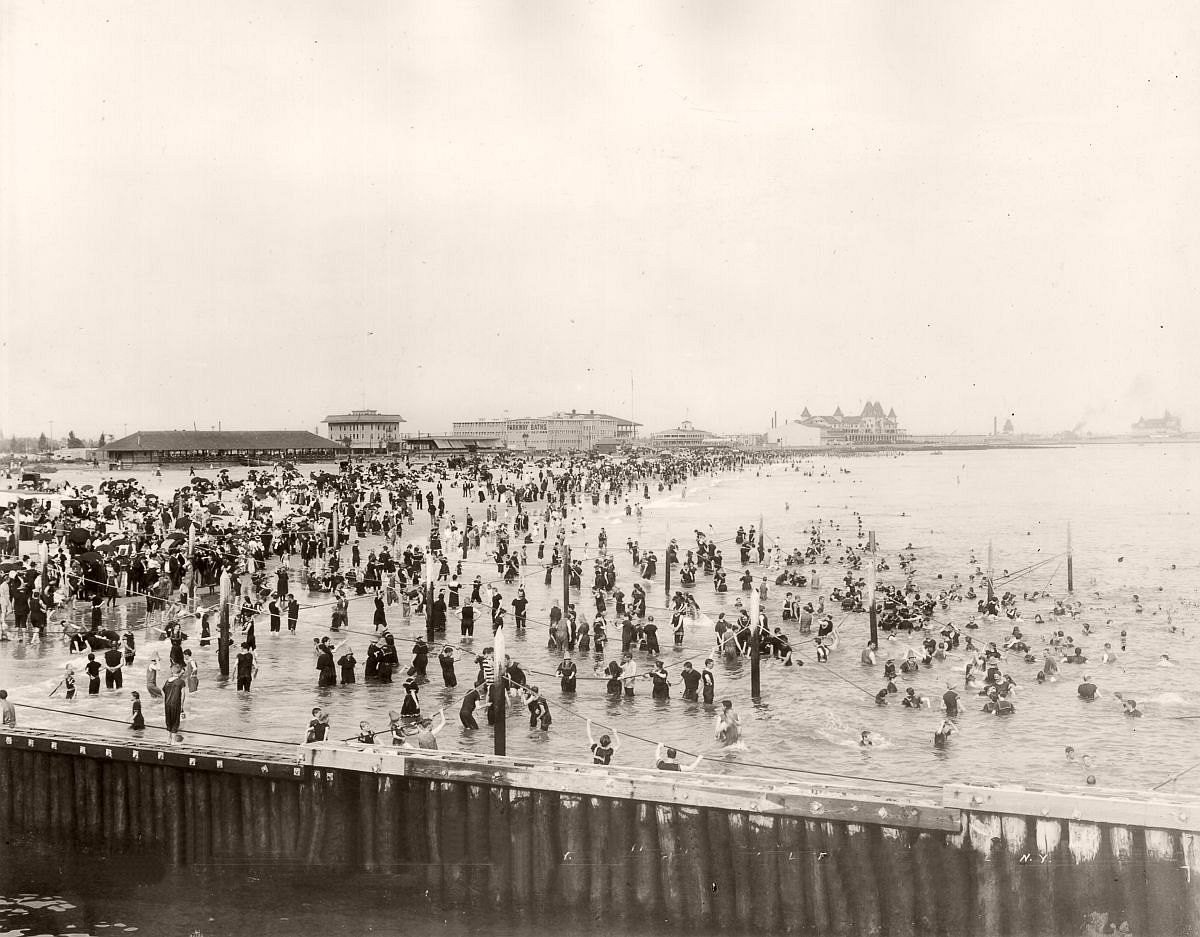 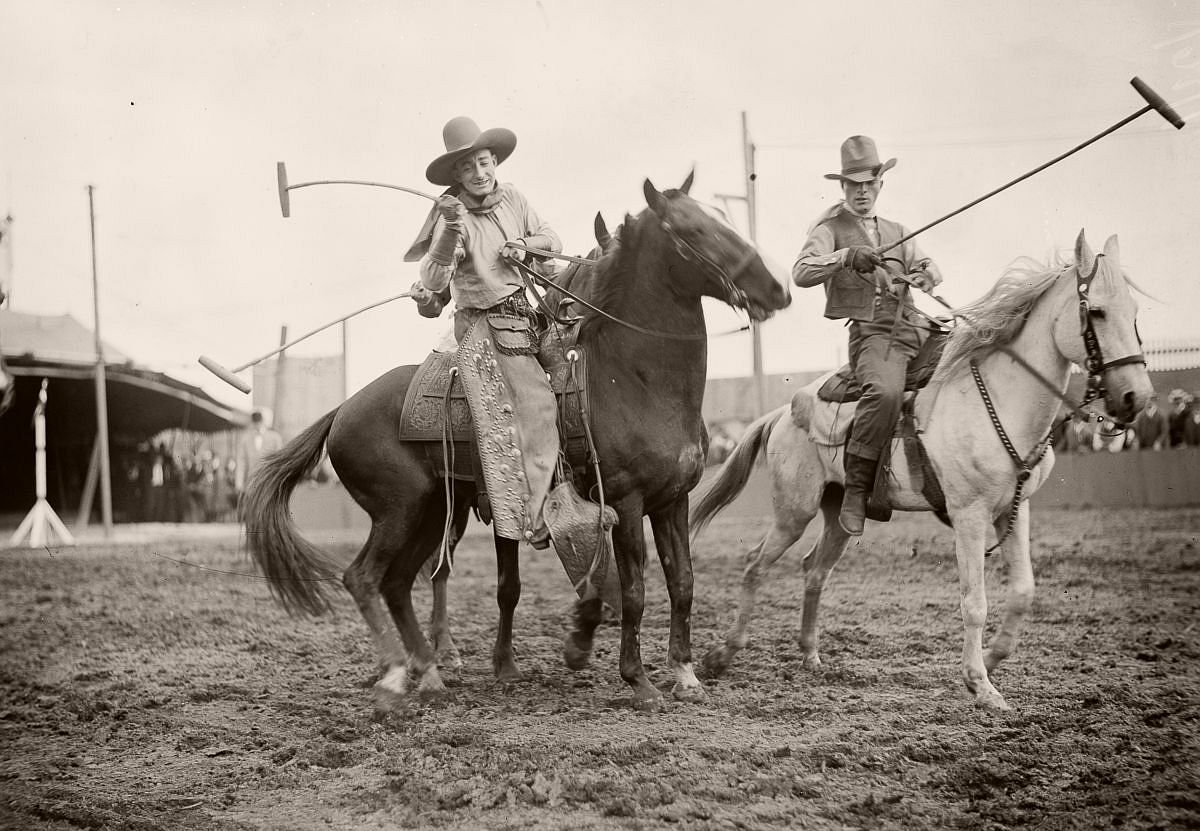 Riders compete in a game of “Wild West Polo” at the Coney Island fairgrounds, c.1900.