Prohibition in the United States was a nationwide constitutional ban on the sale, production, importation, and transportation of alcoholic beverages that remained in place from 1920 to 1933. It was promoted by “dry” crusaders movement, led by rural Protestants and social Progressives in the Democratic and Republican parties, and was coordinated by the Anti-Saloon League, and the Woman’s Christian Temperance Union. 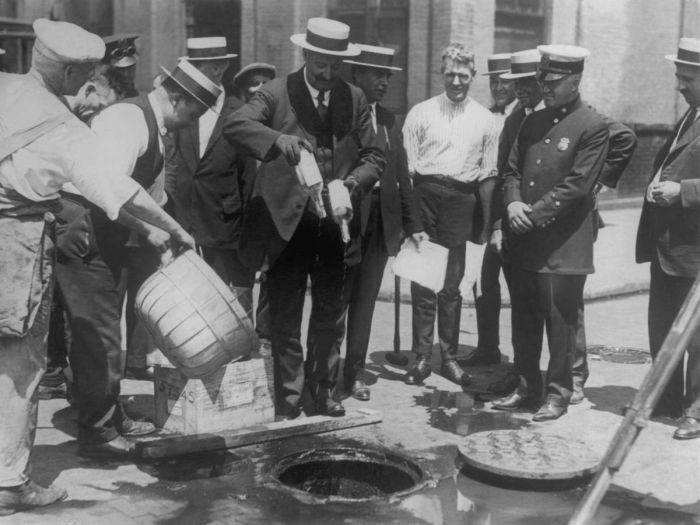 Prohibition began in 1920 with the passing of the Volstead Act. The Eighteenth Amendment of the United States Constitution, prohibiting the production and selling of “intoxicating liquors,” had been ratified in 1919, and the Volstead Act was enacted in order to enforce and regulate the Amendment. Here, alcohol seized by police is dumped into sewage drains in New York. 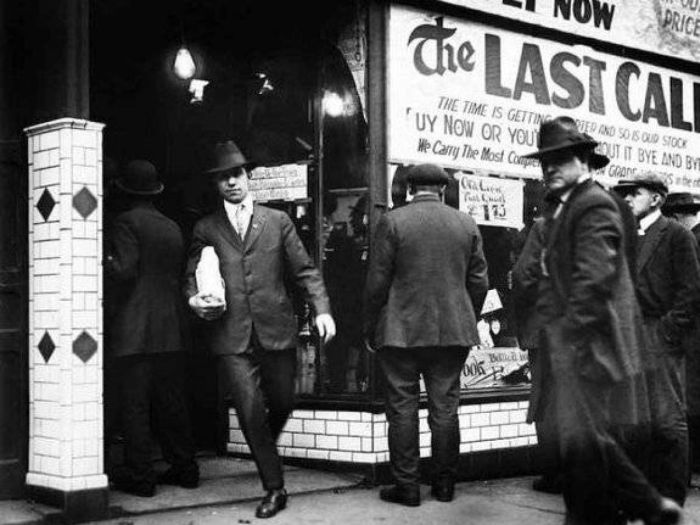 This liquor store advertises that “The time is getting shorter and so is our stock…” as Prohibition begins in 1920. 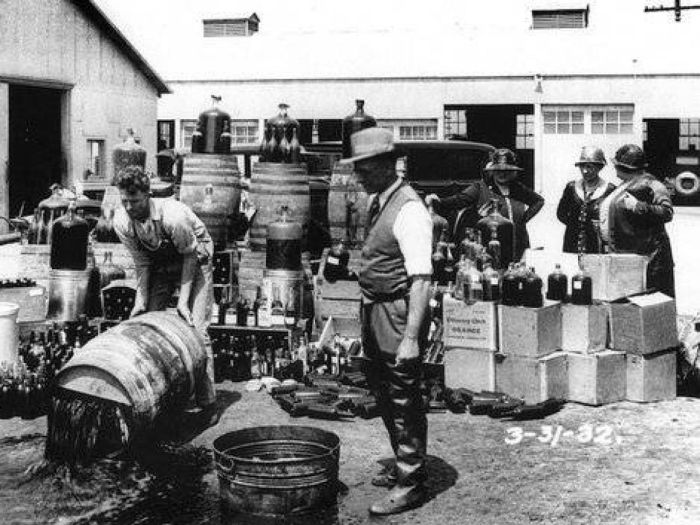 Casks of booze go straight down the drain as Prohibition takes effect. 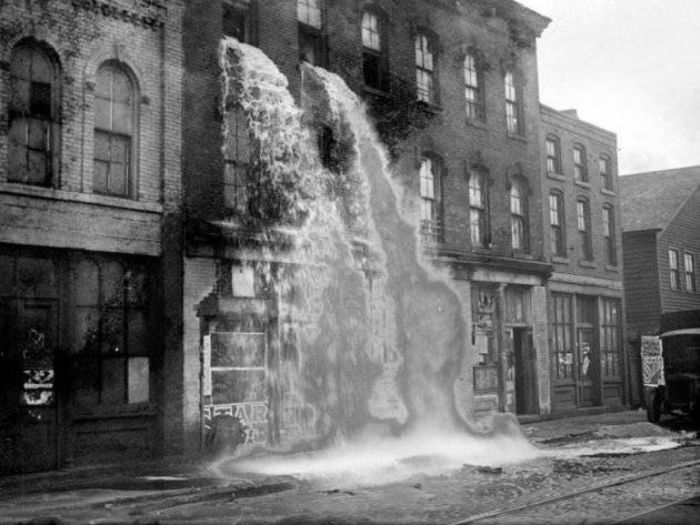 This illegal whiskey distillery near Detroit is put out of business. 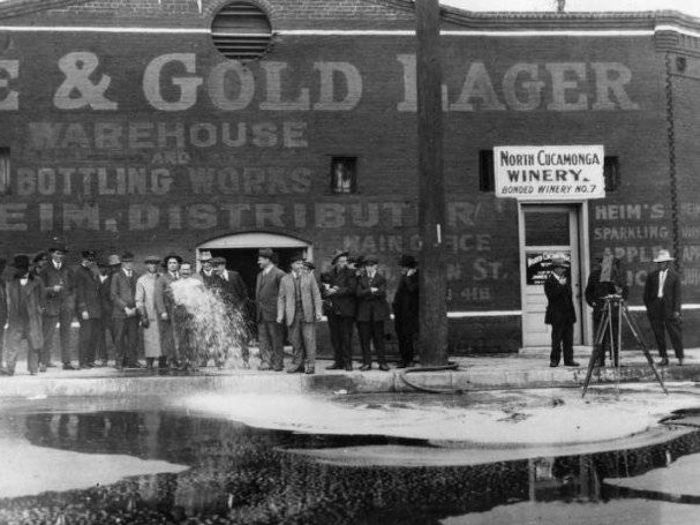 Gallons and gallons of wine pour into the street at this winery near Los Angeles. 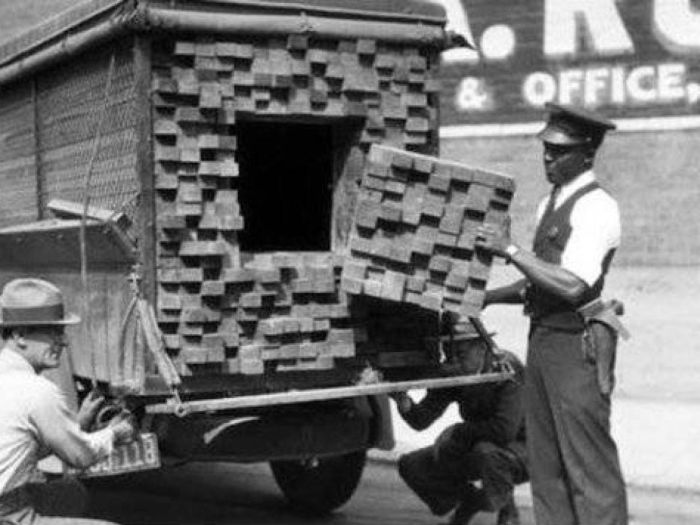 Booze smugglers employed all manner of tricks to avoid the law. 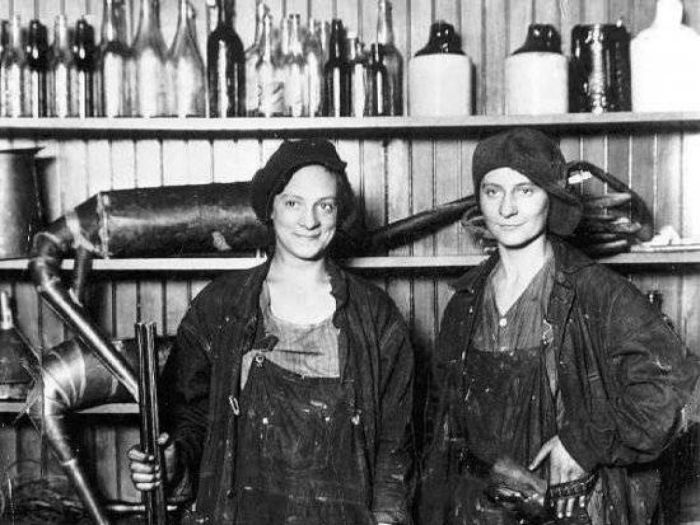 These Grand Dames of Illicit Distillation prove that not all bootleggers were men. 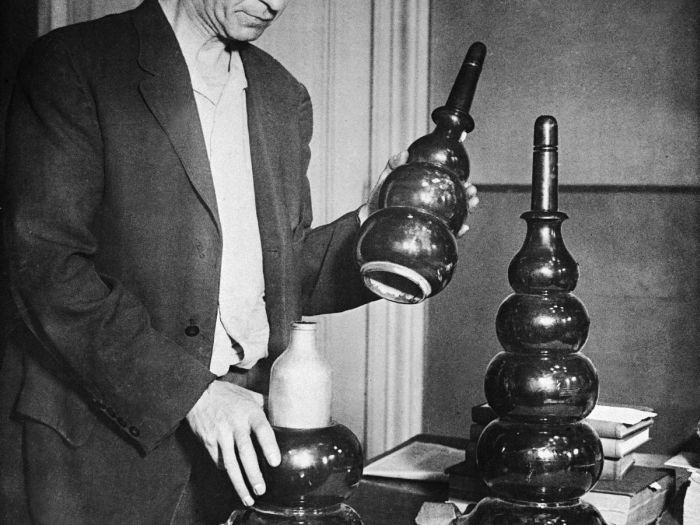 During Prohibition, Americans were forced to hide their bottles of alcohol in creative ways. 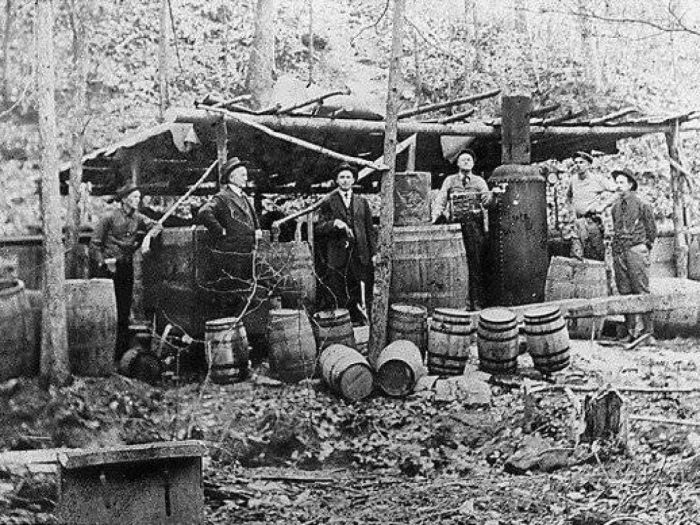 These rural moonshiners set up their operation far out in the woods to avoid detection by Johnny Law. 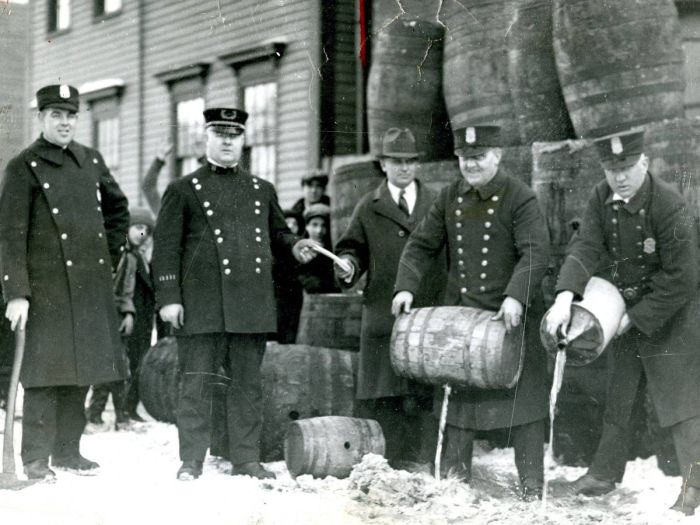 Officers in Cambridge, Massachusetts pour confiscated liquor into the sewer. 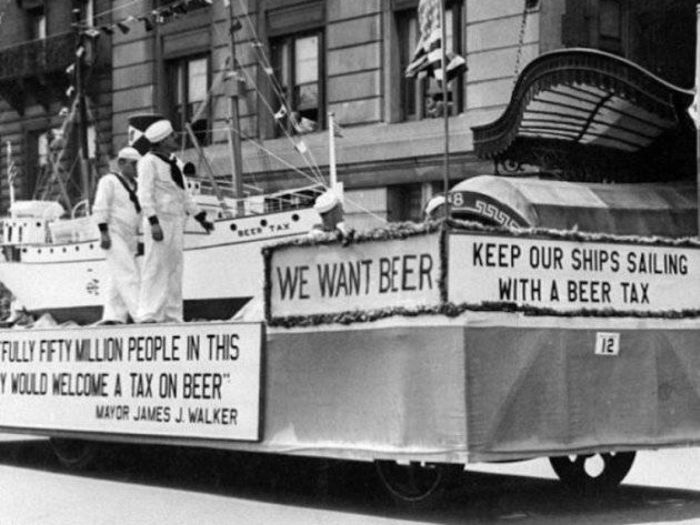 Needless to saw, Prohibition wasn’t the most popular concept. 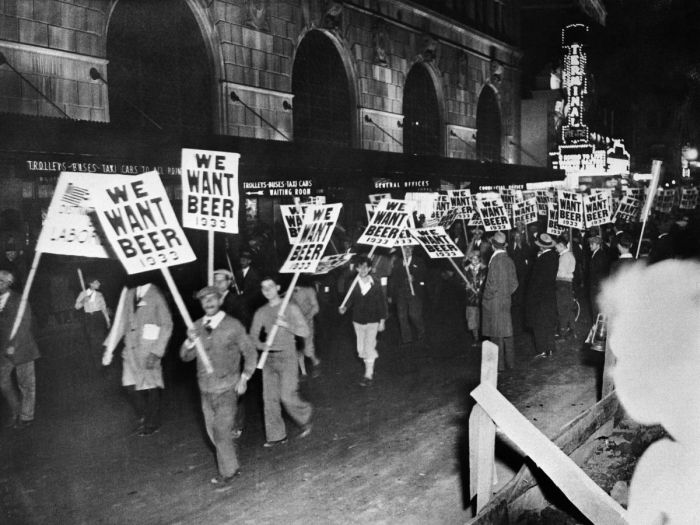 Protestors march in New York City on November 10, 1932, calling for the end of Prohibition. 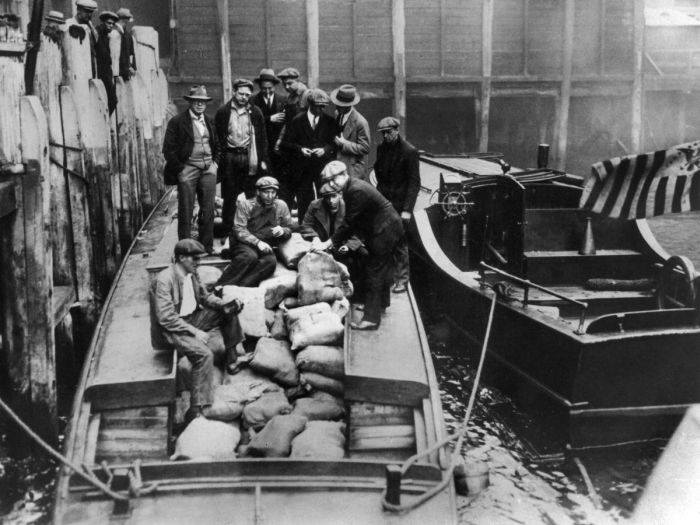 Customs agents confiscate a large amount of alcohol from a bootlegger’s boat. 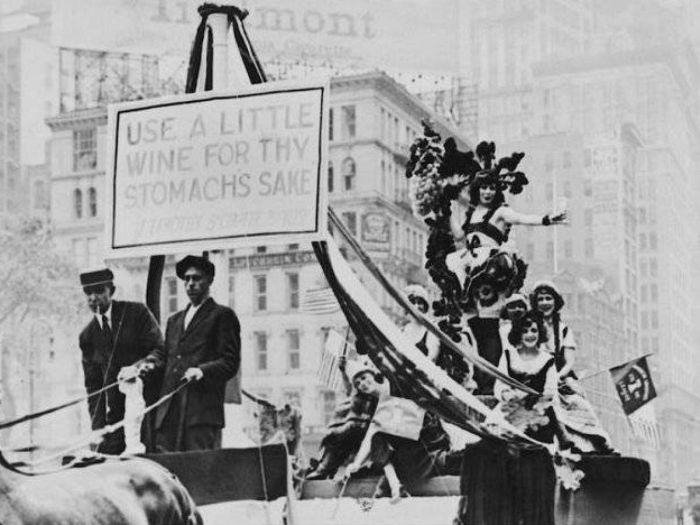 These anti-prohibition protesters use biblical passages to make their point. 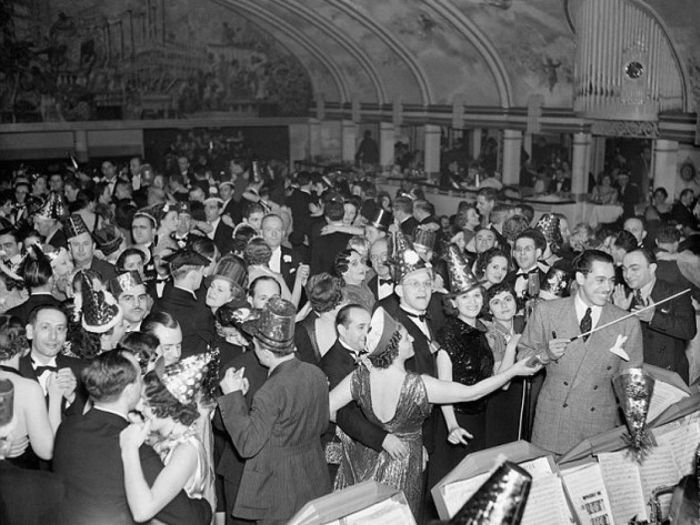 Speakeasy patrons drink and dance at this party. 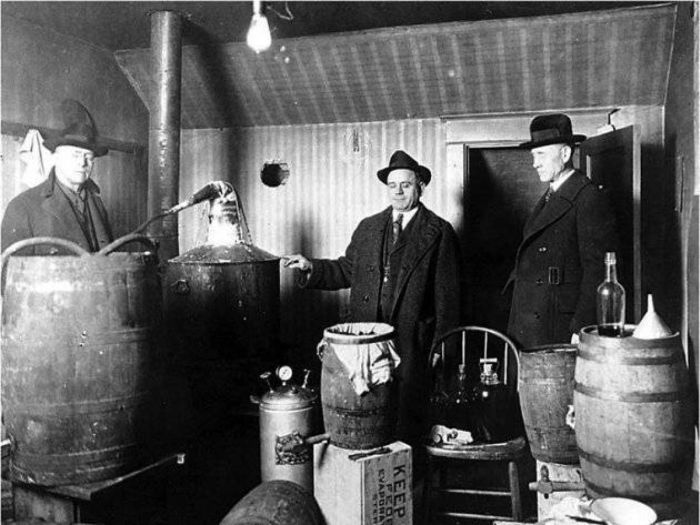 Officers break up an illegal distillery in King County, Washington. 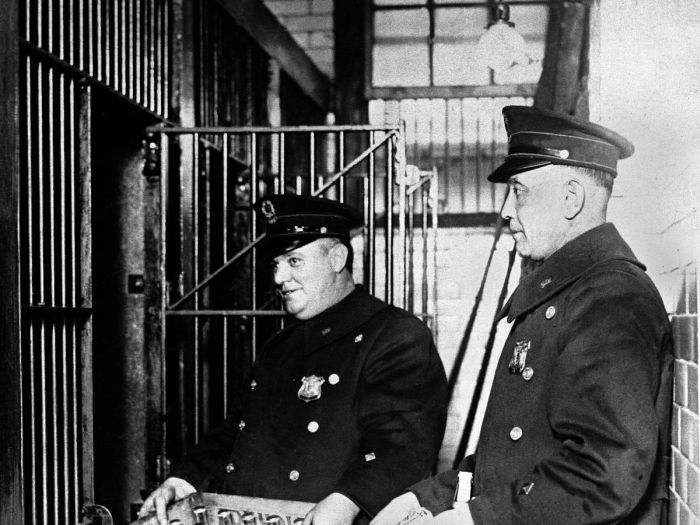 Prohibition agents seize boxes of booze during a raid.