Clayton Anderson was living the life of a 19-year-old, had secured a funky apartment near the water in Miami Beach, was waiting tables and hanging out with friends, when his life took a decidedly atypical turn. The courtyard payphone rang and his father on the other line said he needed to come help the family run their cinnamon roll concession with the travelling carnival. At the insistence of his artist friend Jack Pierson (who contributed the book’s introduction), Anderson bought a camera and documented the years he was on the road between 1988 and 1992.

The resulting book of 75 black and white photos, Kicking Sawdust: Running Away with the Circus and Carnival, doesn’t glamorize, it humanizes. While not the everyday experience for most, the collection of images normalizes the day to day existence of life on the road.

When daily life is shared—-with anyone, in any context—this intimate kind of knowing facilitates the forming of a kind of family. Perhaps existing in just that one dimension, perhaps for only that specific time and space in one’s life; but seeing people first thing in the morning, trading chores, witnessing the range of emotions humans navigate in daily life, familiarizes and connects.

Behind the sequins and top hats, the flapping tent sides and animal menagerie, are people working. Their jobs are unusual, to be sure. They are counting money, manning ride lines, handling animals. They are posing for the camera, they are performing for the audience. But at the end of the day, with the costumes changed and makeup wiped off, they are people earning a living and living their life. The images in Anderson’s book provide a glimpse into a way of being that is exotic and not, all at the same time.

“No borders, nothing. We are just who we are, together. And it’s the same thing in all. The carnies are the carnies. It’s just because you have to protect yourself, and so you get together and you feel comfortable,” shares Dominique Jando, a 50-year international veteran of the circus arts. The window into this borderless lifestyle is opened up even further with a question and answer included in the book between Tessa Fontaine, an author/performer and Jando. Their conversation helps the photos unfurl even further in meaning and implication about the way of life, the roles, and the choices. Jando points out that there exists a code of values within the circus community.

“Everybody knows who you are and what you can do, and you are respected for what you do, whatever that is. And no one thinks they are more interesting than the other because everybody knows the amount of work that has to be done to reach a certain level. So that’s very healthy, in a way…Because you all know that, you all share the same values. The tenets and principles of the circus world are the same for everybody and everybody respects them.” 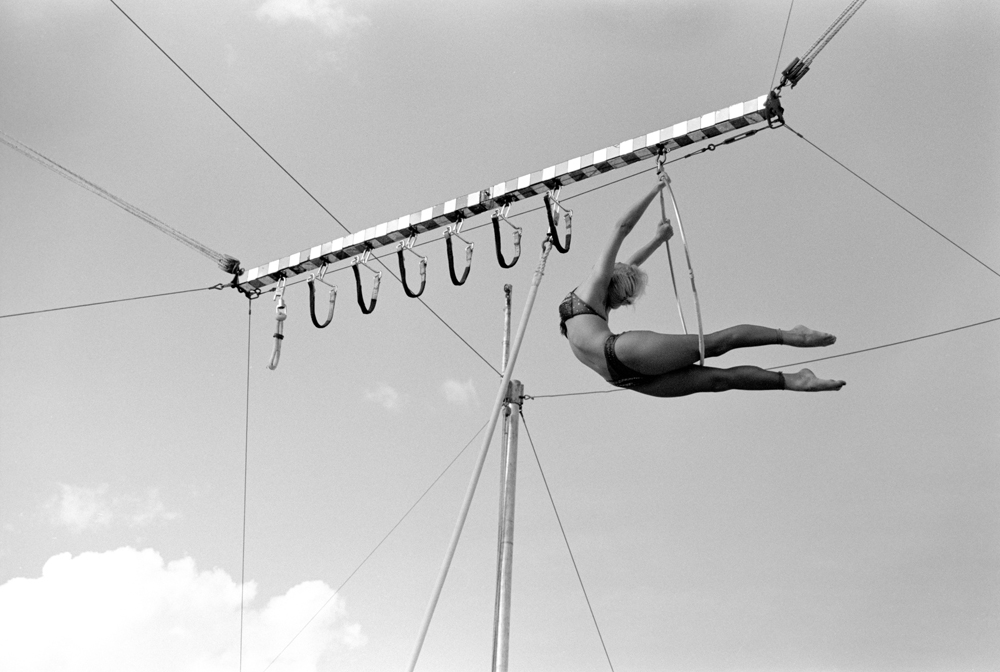 This is an Acrobat from The Hanneford Circus. They’d rehearse for days out in the open before the tent ever goes up. 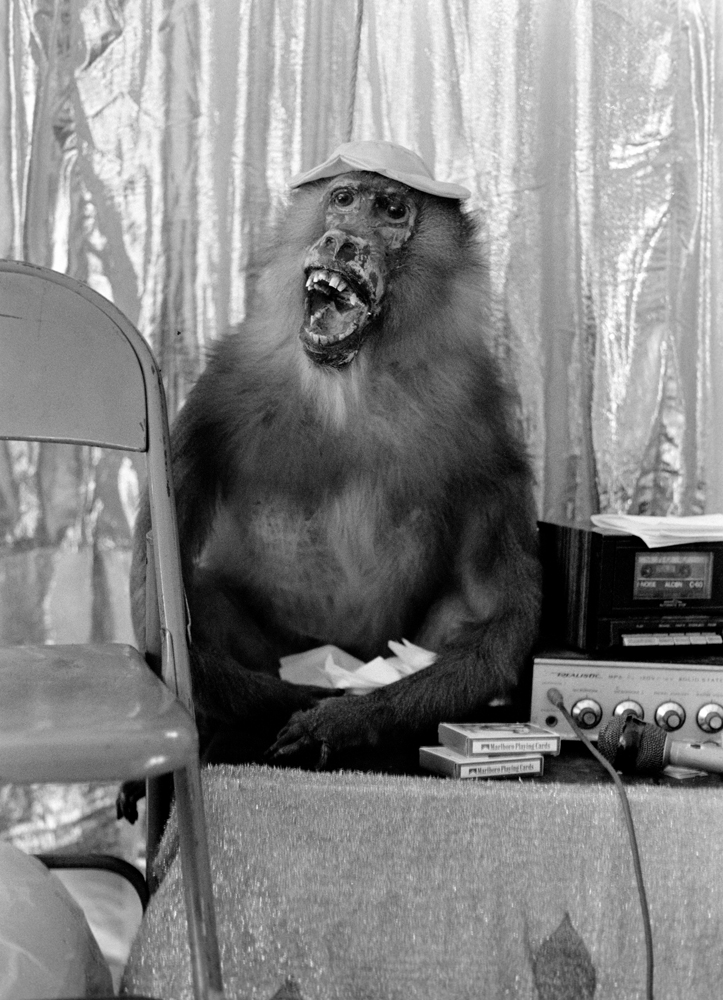 This Baboon was the Sideshow’s mascot. 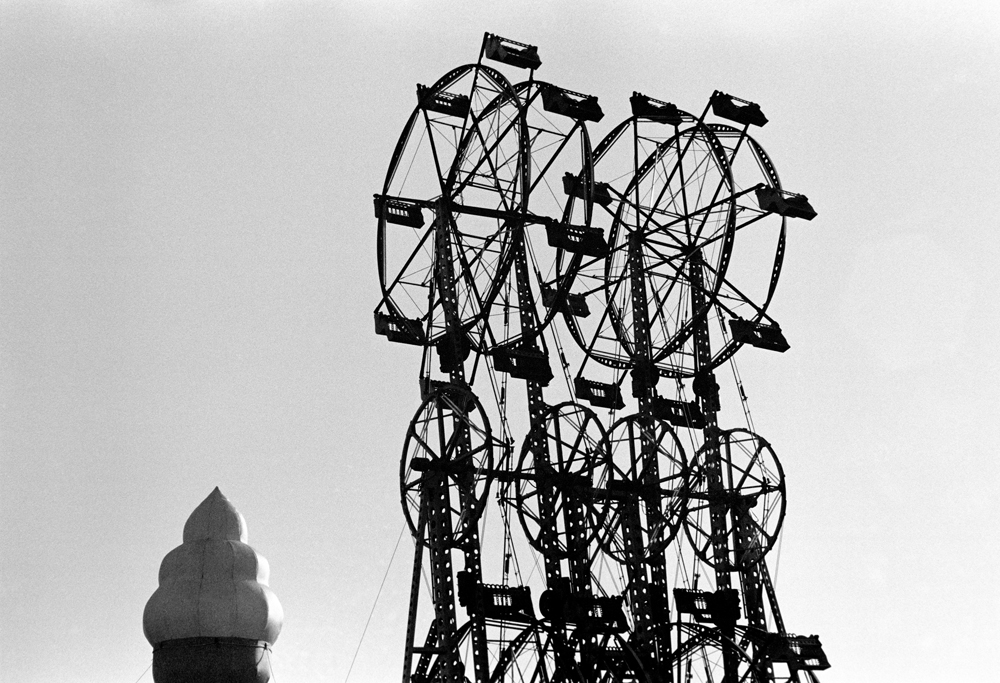 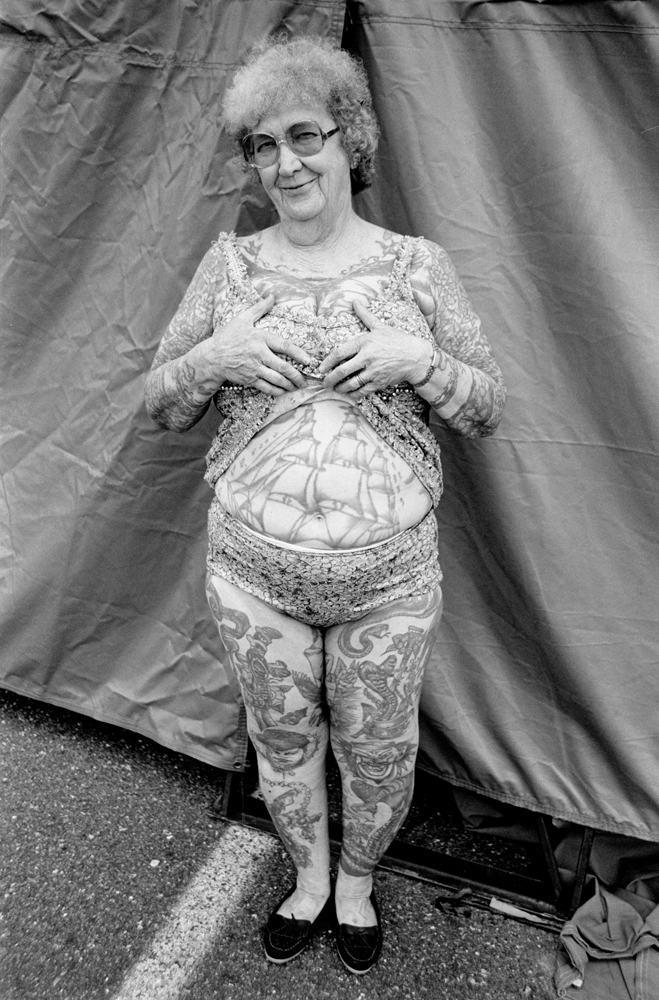 This is Lorette, the tattooed lady. My stepmother Sharon and she would do their laundry together at a local Laundromat. Lorette would wear long pants and a long-sleeved sweatshirt that completely covered her tattoos. It would transform her into a just another sweet grandmother doing her laundry like everyone else. 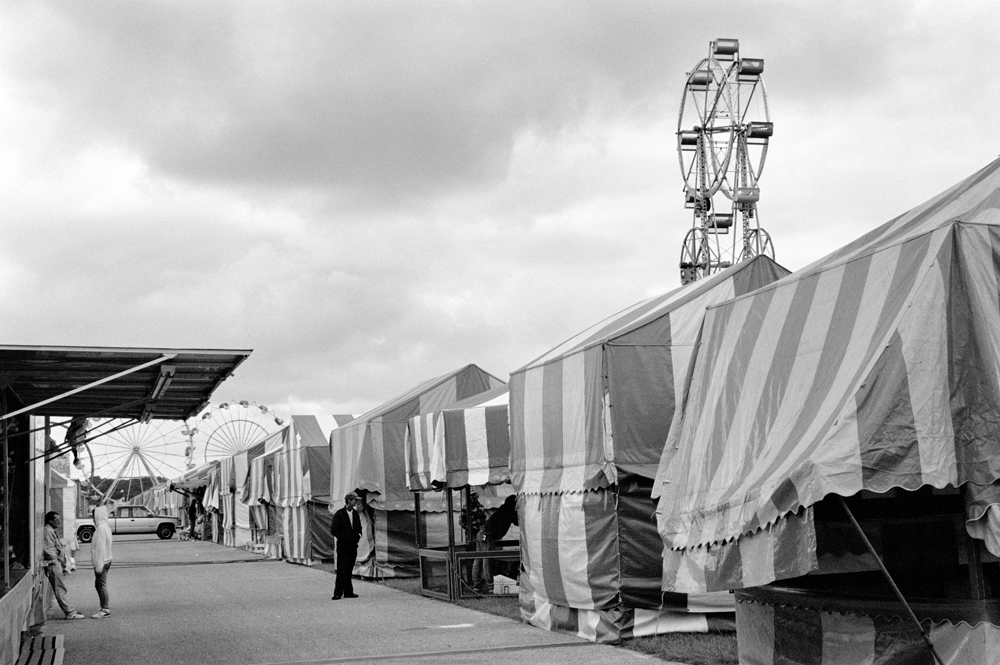 This is the carnival midway just opening up for the day. 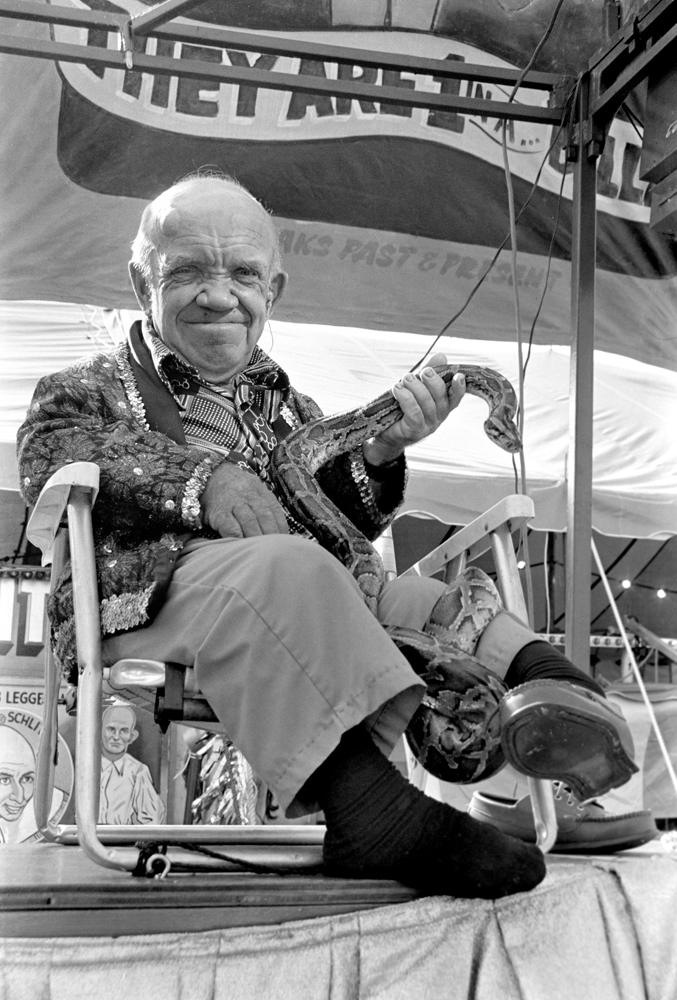 This is Petey with a Python on a stage in front of the Sideshow. He was trying to entice the locals to go inside the tent to see the sideshow acts. Petey was very shy. I never heard him speak a single word. 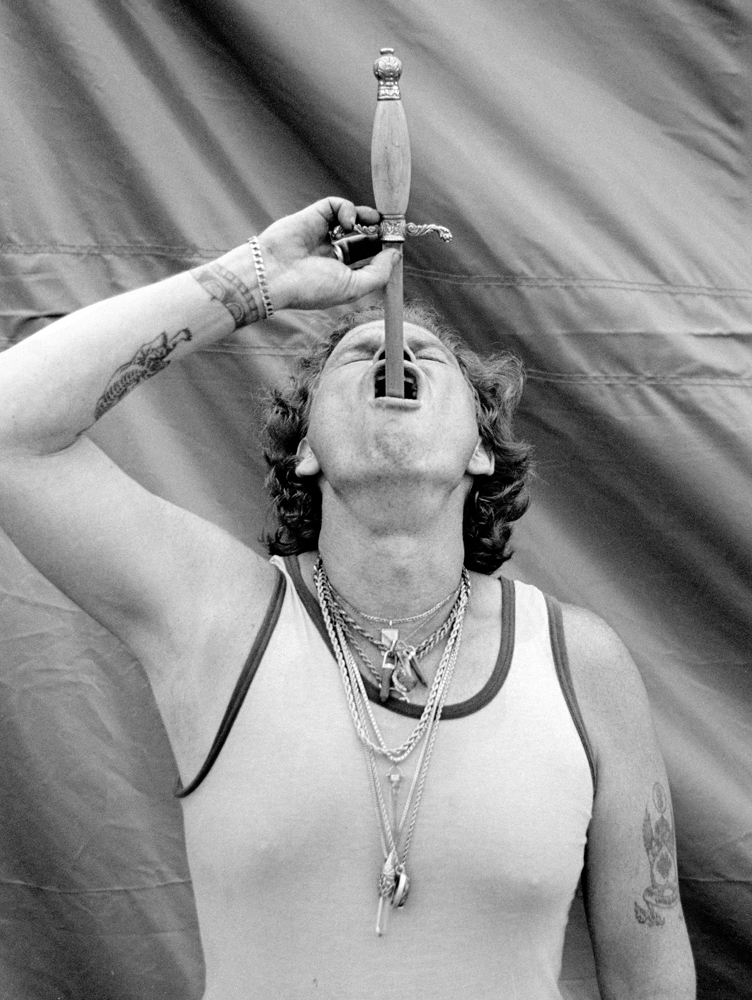 This is “Red” the sword swallower. The first time I ever tried Moonshine was with Red, late, after hours in the closed carnival. It packs a punch. 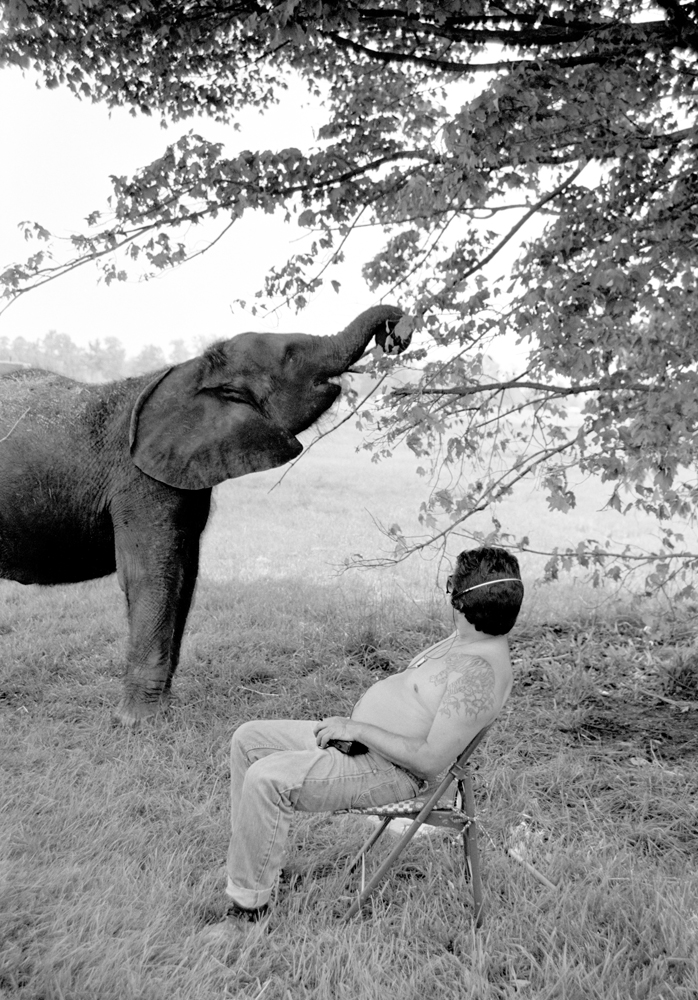 This is Tanya the elephant and Raul her caretaker. In the mornings before showtime Raul would walk her out to a tree in the middle of a nearby field to snack on some fresh leaves. 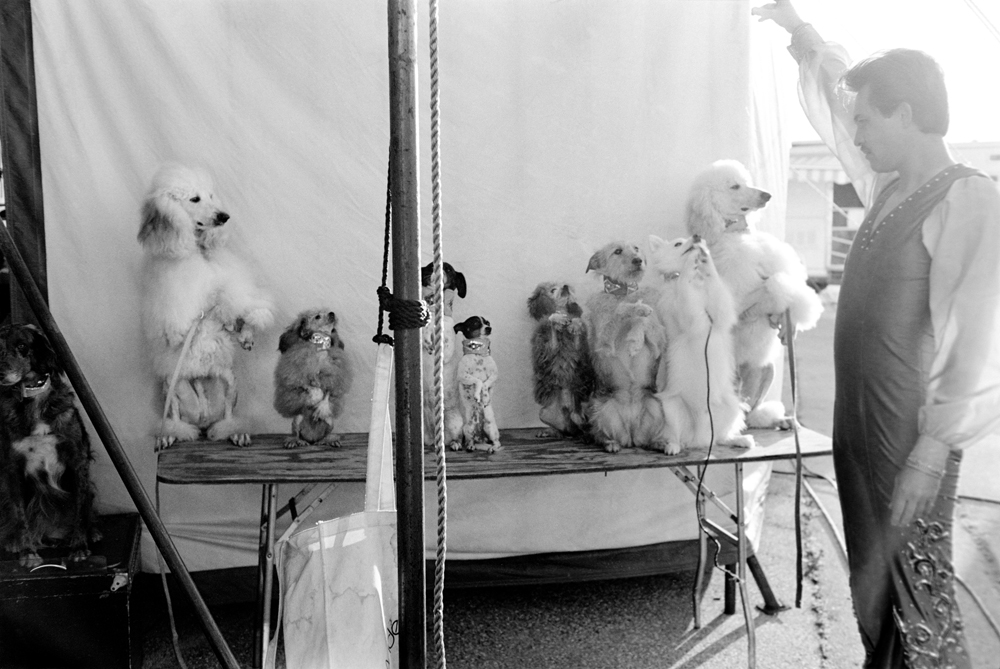 Backstage with a Dog Show circus act. The saying, “Dog and Pony Show” comes from the circus world. 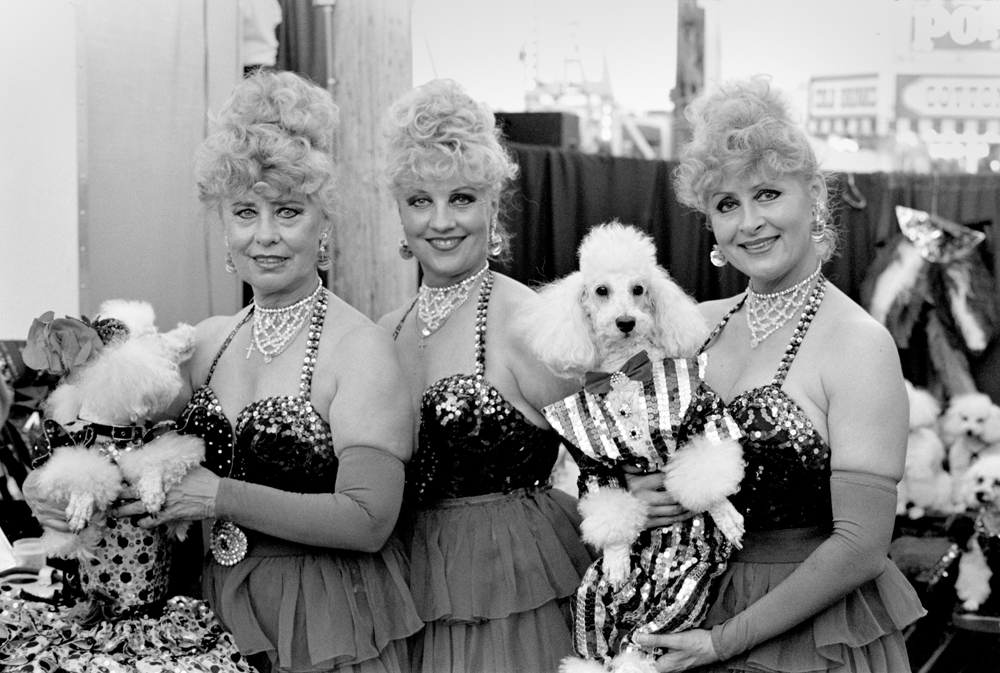 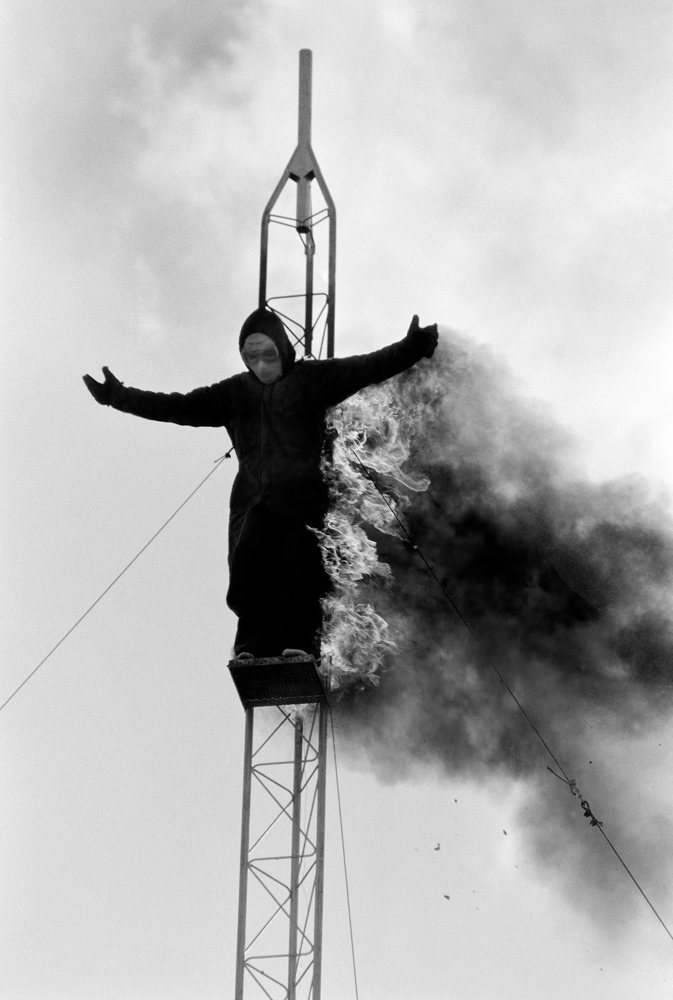 This is “The Human Torch.” He would light himself on fire and then dive into a pool of water below him. 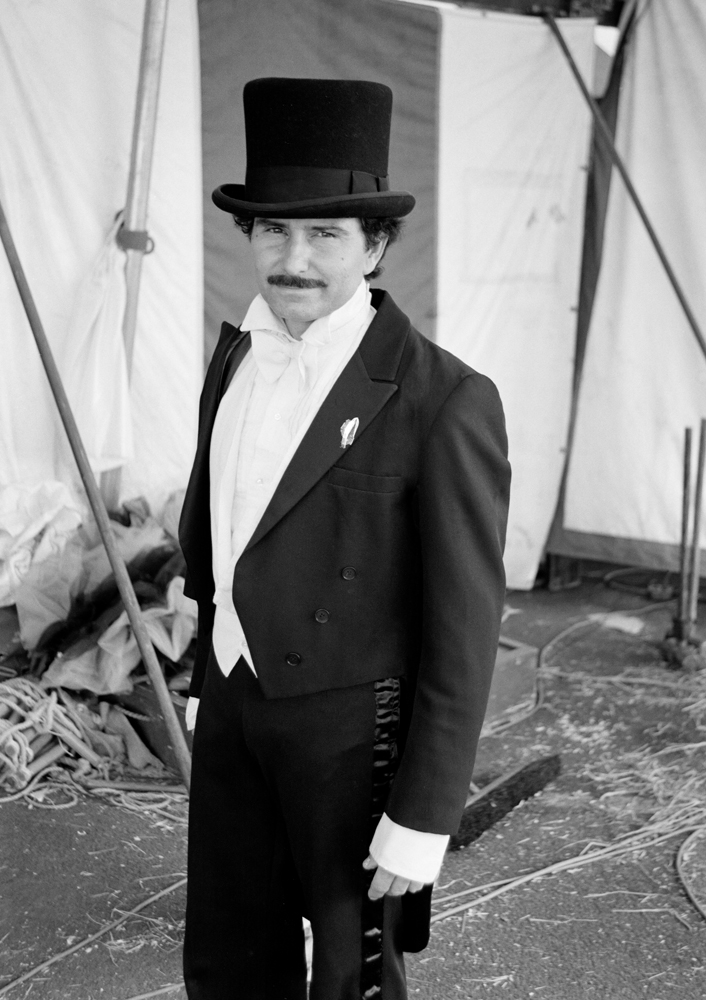 This is Tino Wallenda of the famous circus highwire family and troupe, The Flying Wallendas.