The Nebraska State Penitentiary used photography beginning in 1867 to record the likeness of the state’s most infamous residents. The Omaha police photographed suspects when arrested. Whether the people depicted were guilty or innocent, behind every photograph is a human story. This glimpse back at some of the thousands of photographs in the Nebraska State Penitentiary and Omaha Police Court Collections at the Nebraska State Historical Society and their accompanying tales offer insights into how earlier Nebraskans ran afoul of the law, and how some attitudes about crime and punishment may have changed. 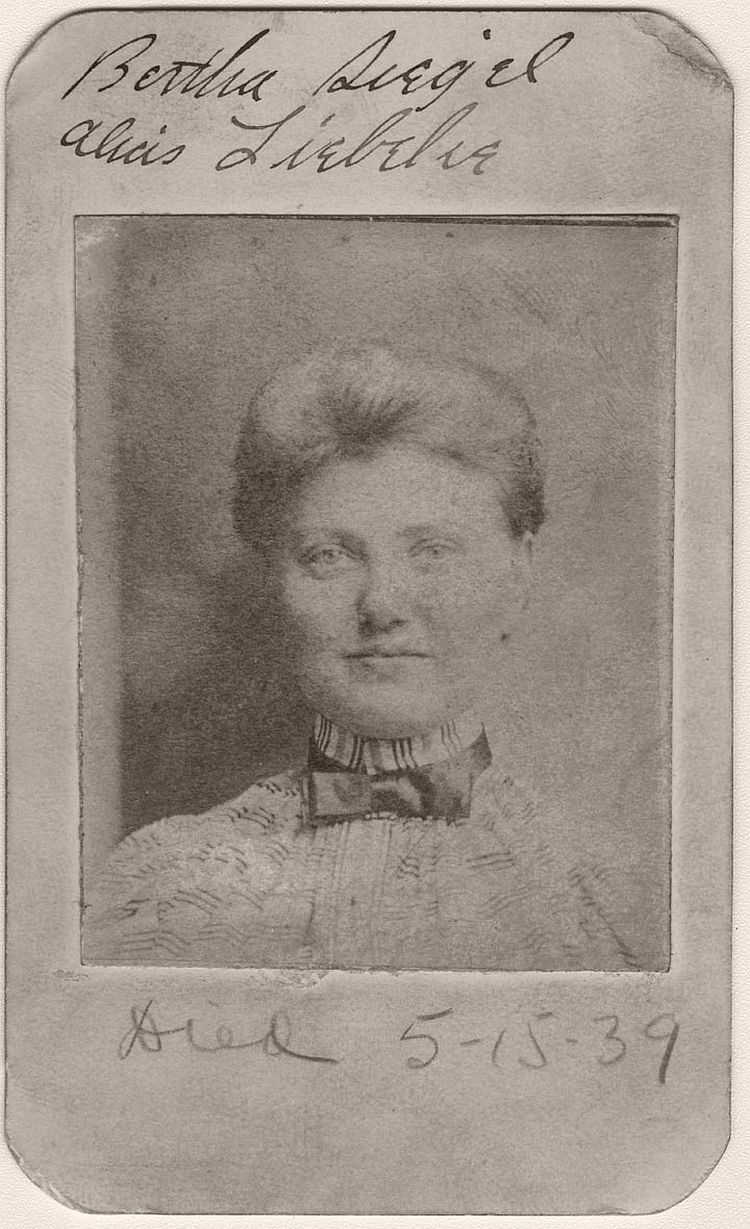 Bertha Liebbeke earned the reputation of being one of the Midwest’s most notorious pickpockets. She would search out a well-dressed man, ideally with a diamond-studded lapel pin. Bertha would then “accidently” stumble into the helpless victim, pretending to faint into his arms. While he attempted to help her, Bertha would relieve the gentleman of his valuables or wallet. This trick earned her the nickname “Fainting Bertha.” Authorities from Illinois, Kansas, Iowa, Missouri, and Nebraska knew Bertha and her tricks. Her aliases included Bertha Liebke, Jennie Jennings, Bertha Nixon, J. Armstrong, Carrie Jones, Bessie Milles and Menni Swilson, and Bertha Siegel, the name on her Omaha Police Court mug shot. 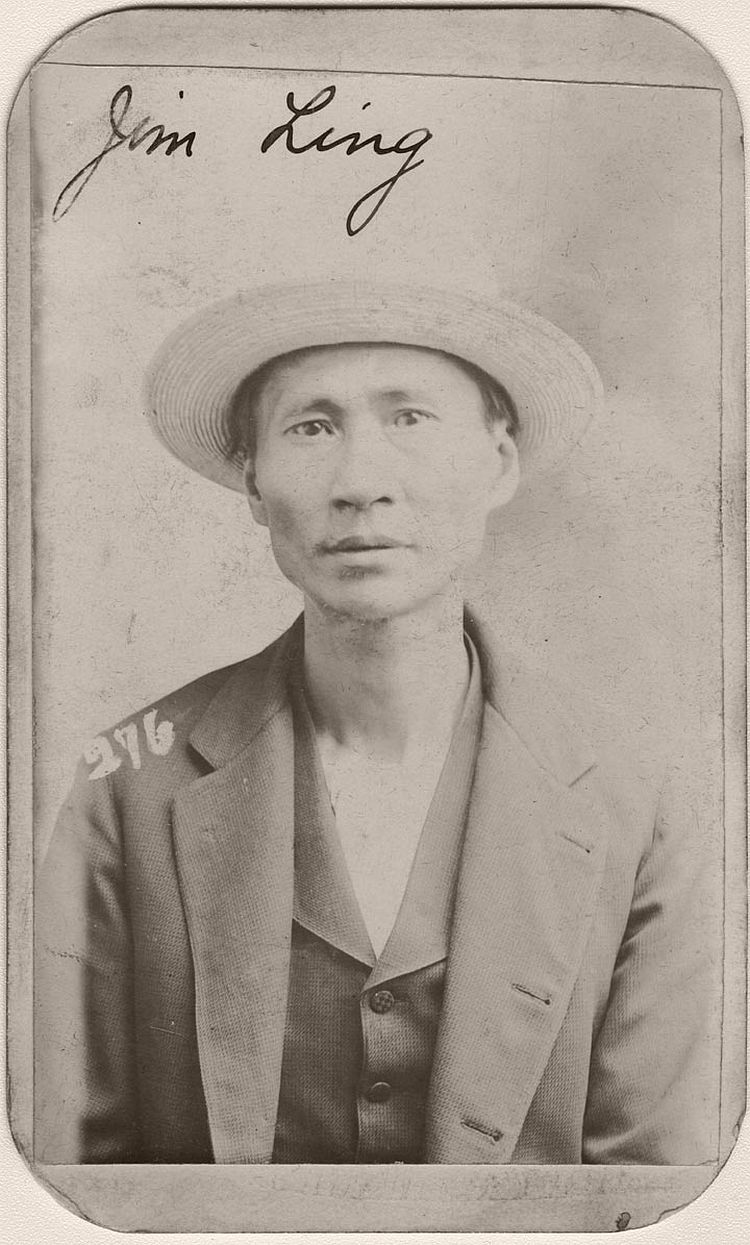 Omaha police arrested Jim Ling for operating an opium joint on June 3, 1898. The back of his mug shot lists his occupation as thief. Ling was described as 5 feet, 6 inches tall and weighing 104 pounds with black hair and hazel eyes. 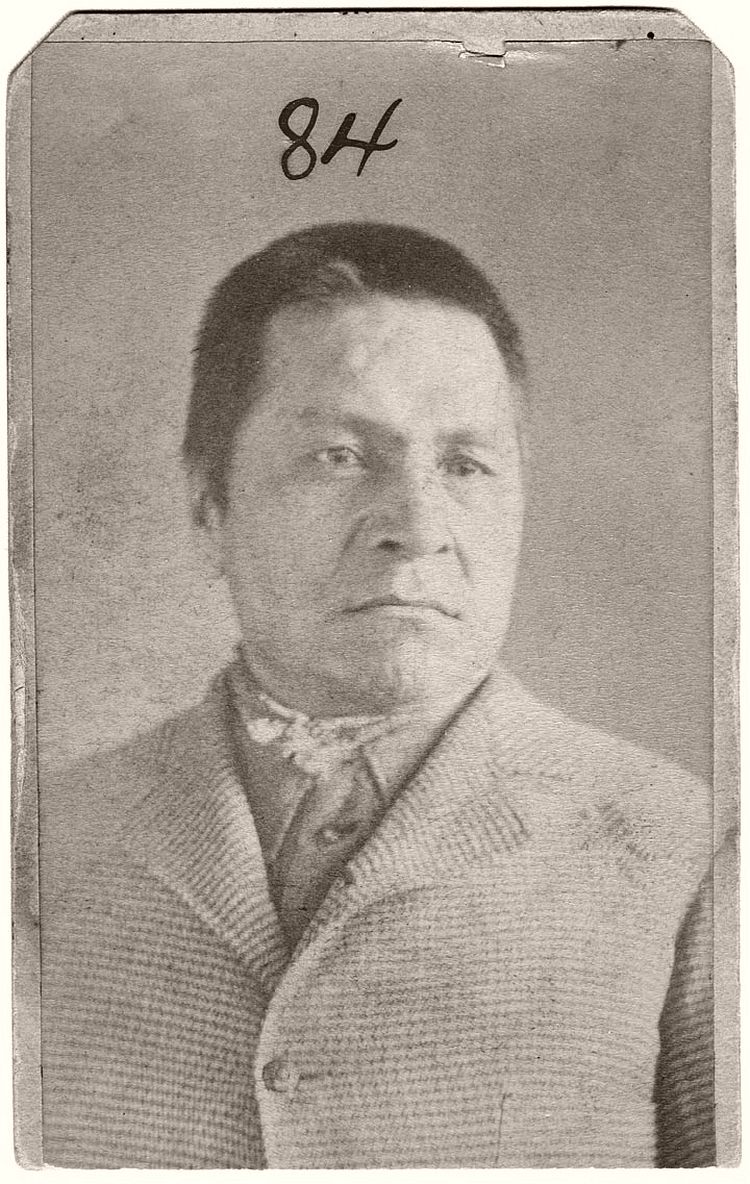 James Whitewater killed two men. While in prison from 1872-1889, he embraced Christianity. In 1889, the Nebraska legislature passed an act allowing the governor to pardon 2 inmates who had “been in jail more than 10 years or whose conduct while incarcerated merited such mercy.” When released, Whitewater walked through the prison gates and “rolled in the grass from joy.” 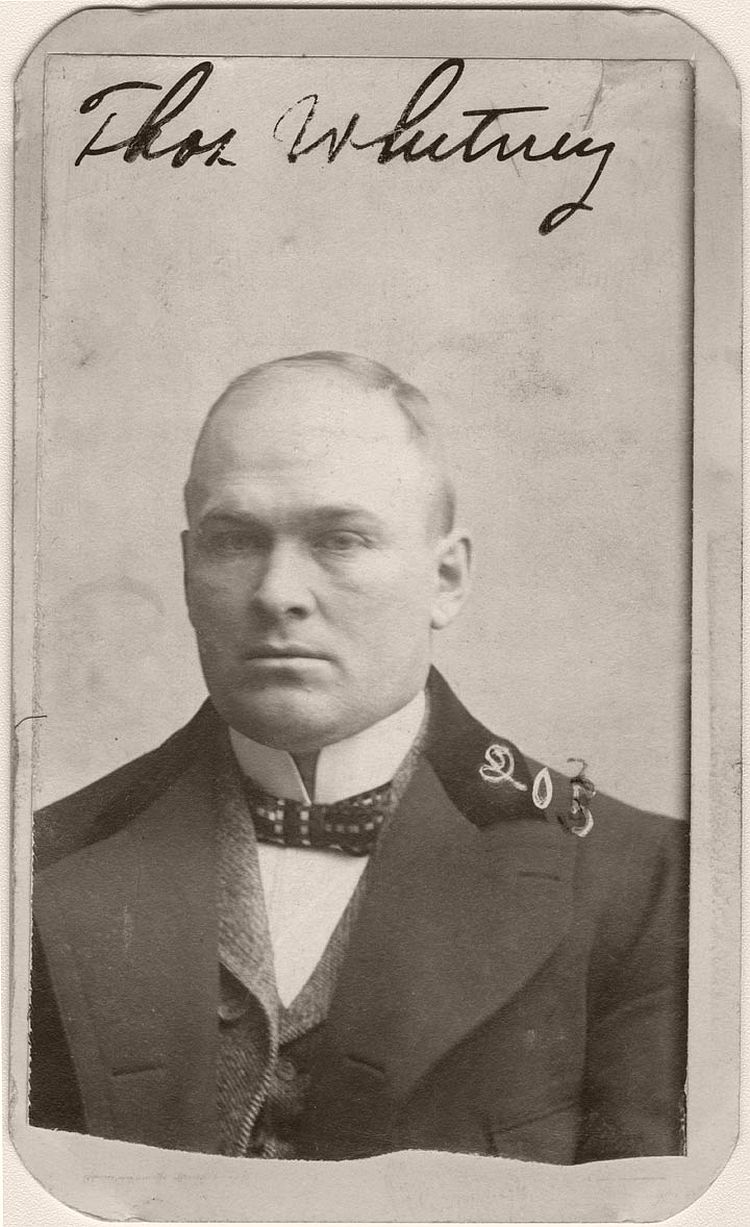 Thomas Whitney, known to his clients as the Professor, advertised extensively in Omaha newspapers as a clairvoyant, palmist, and astrologer. Whitney claimed he had no equal in giving advice on love, law, deeds, wills, mining, divorce, changes, investments, patents, and all other business of a financial nature. Readings cost only $1 for gentlemen and $.50 for ladies. One of his customers proved to be unsatisfied with the readings and the Professor was arrested for obtaining money under false pretenses in December 1915. According the description on his mug shot, Whitney had tattoos on both of his arms. The Omaha police released Whitney after he agreed to return the money. 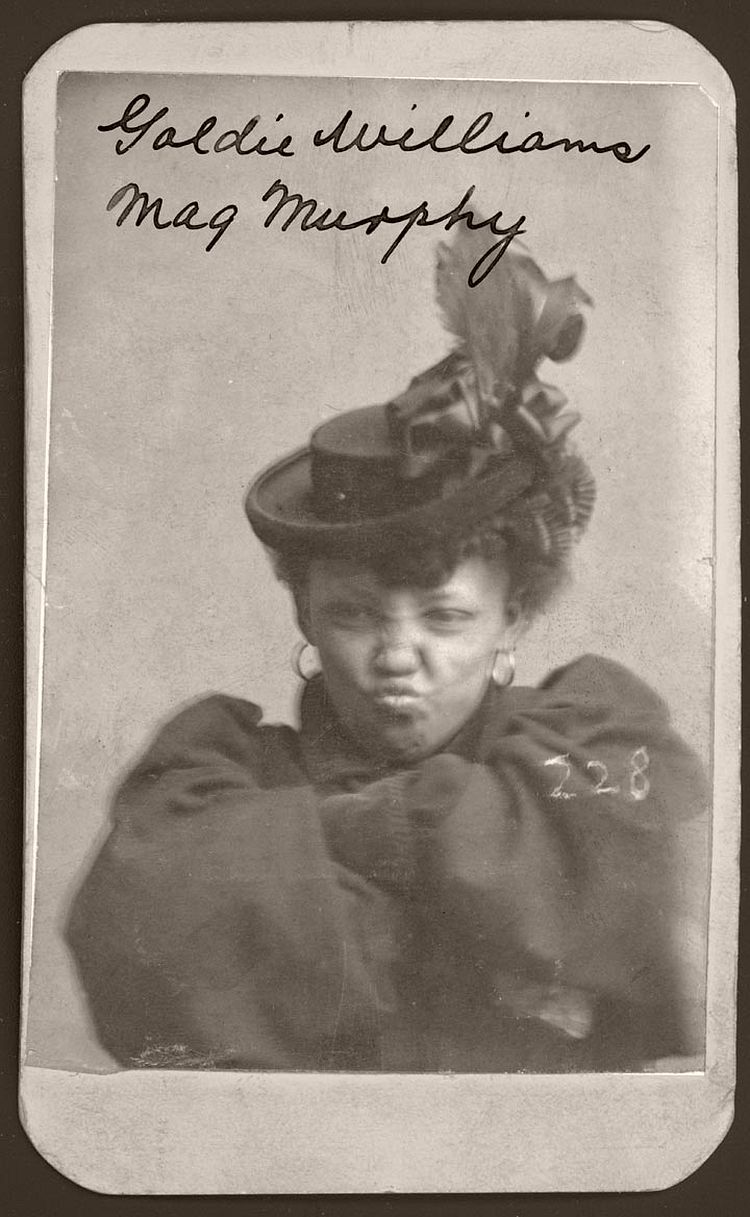 Goldie Williams defiantly crossed her arms for her Omaha Police Court Mug Shot. Arrested on January 29, 1898, Williams, also known as Meg Murphy, stood only 5 feet tall and weighed 110 pounds according to police records. She listed her home as Chicago and her occupation as a prostitute. According to her arrest descriptions, her left index finger was broken and she had a cut below her right wrist. Williams sports an elaborate hat with satin ribbons and feathers. She also wears large hoop earrings. 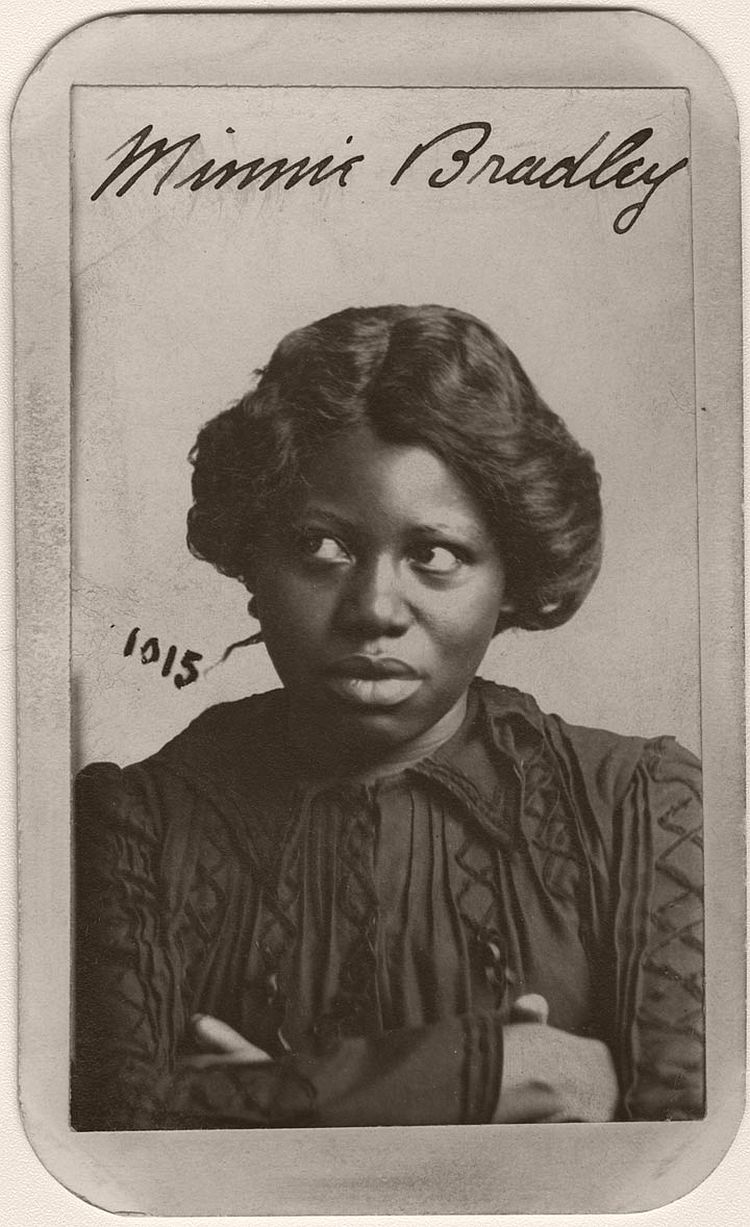 Minnie Bradley refuses to look at the camera in her Omaha Police Court mug shot. Minnie, 27, and 5 foot 2 inches tall was arrested in Omaha on December 13, 1902 for larceny from a person. She listed her residence on north 11th Street in Omaha and her occupation as prostitute. The description also noted that Minnie wore a wig. 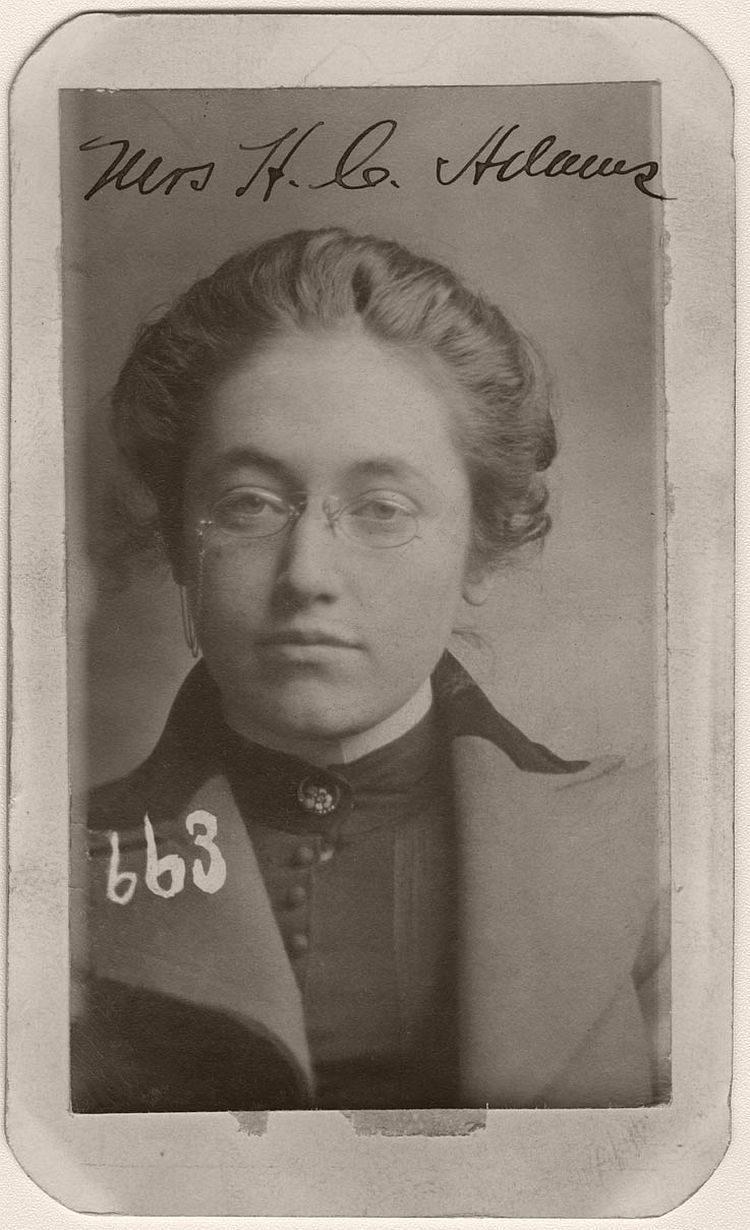 Looks can often be deceiving. Mrs. H.C. Adams looks every bit the typical Victorian lady. Her elegant hairstyle and wire-rimmed glasses hide a dark secret. Mrs. Adams was arrested in Omaha on April 12, 1900 for blackmail. She listed her residence as Palisade, Nebraska, and her occupation as prostitute. The police record describes her as 5 feet, 1 inch tall with a medium build and a sallow complexion. 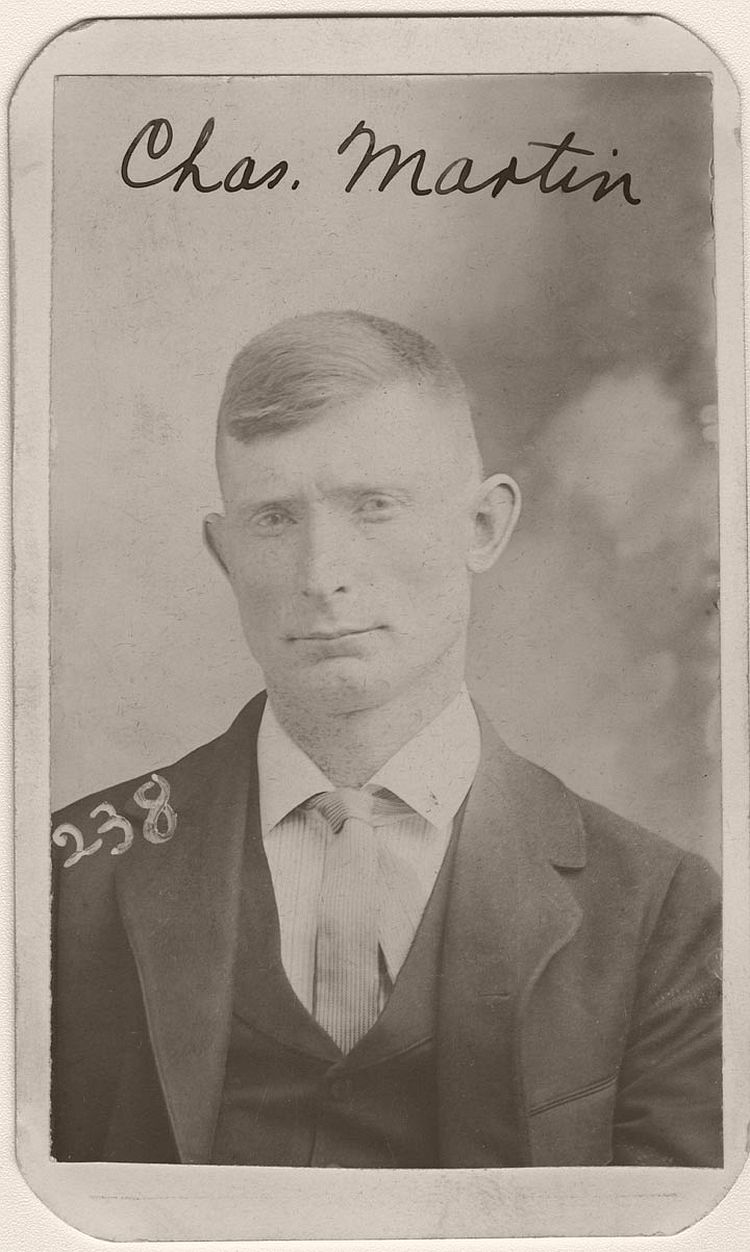 Three burglars blew up a safe in a bank vault in Sheridan, Missouri, on the night of February 15, 1898. They got away with about $2,400. The bank’s insurance company hired the famed Pinkerton Detective Agency and sent Assistant Superintendent F.H. Tollotson to hunt down the burglars. Tollotson tracked one of the wanted men through Missouri to Council Bluffs and eventually to a room at the Sheridan Hotel in Omaha. With the aid of the Omaha police, Tollotson apprehended a gun-welding fugitive after a brief struggle. The alleged bank robber gave his name as Charles Martin, but had several letters addressed to Charles Davis. Martin was unknown to Omaha police, but some detectives speculated to newspaper reporters he could be the notorious safe blower and bank robber Sam Welsh. At the time of his arrest, Martin had a gold watch and $565 in cash believed to be his share of the spoils of the Missouri bank robbery. Martin was taken to the police court where he was measured, photographed, and locked up while he awaited his transfer to Missouri. 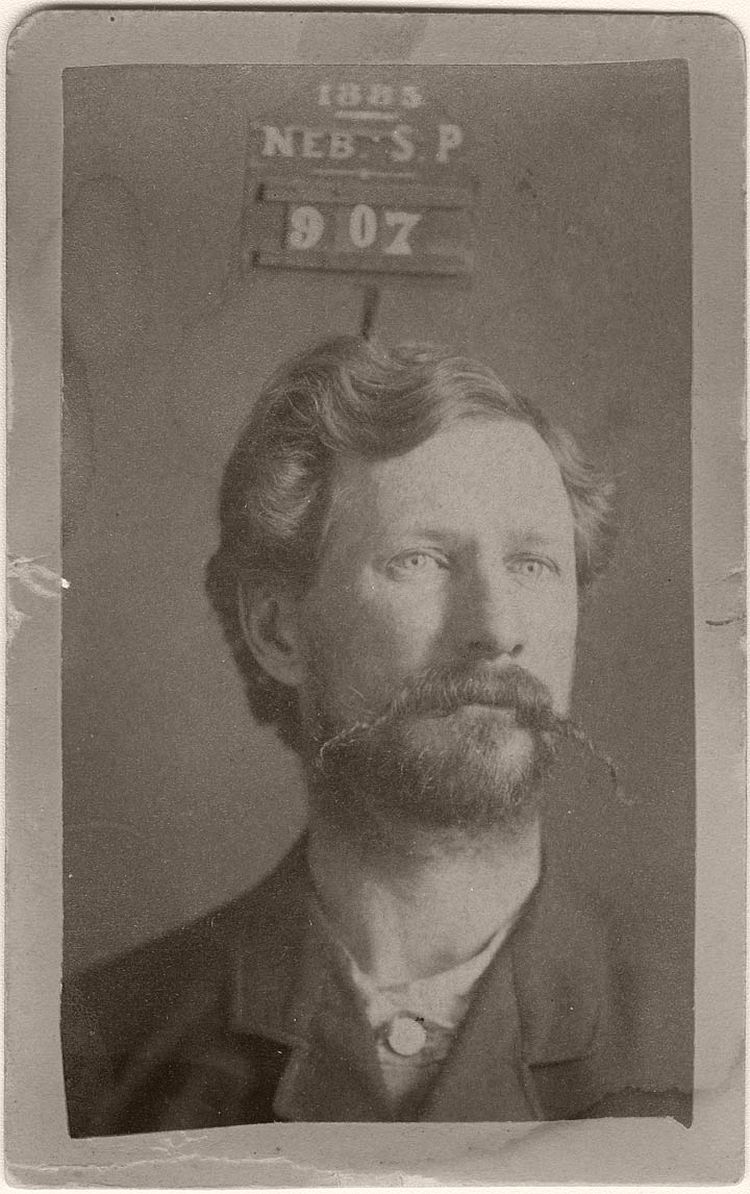 In March 1885, Albert Johnson arrived at the Nebraska State Prison sporting an impressive handlebar mustache. Johnson was sentenced to 1 year and 6 months for grand larceny. Because of prison policy to reduce lice, authorities shaved Johnson’s head and facial hair. 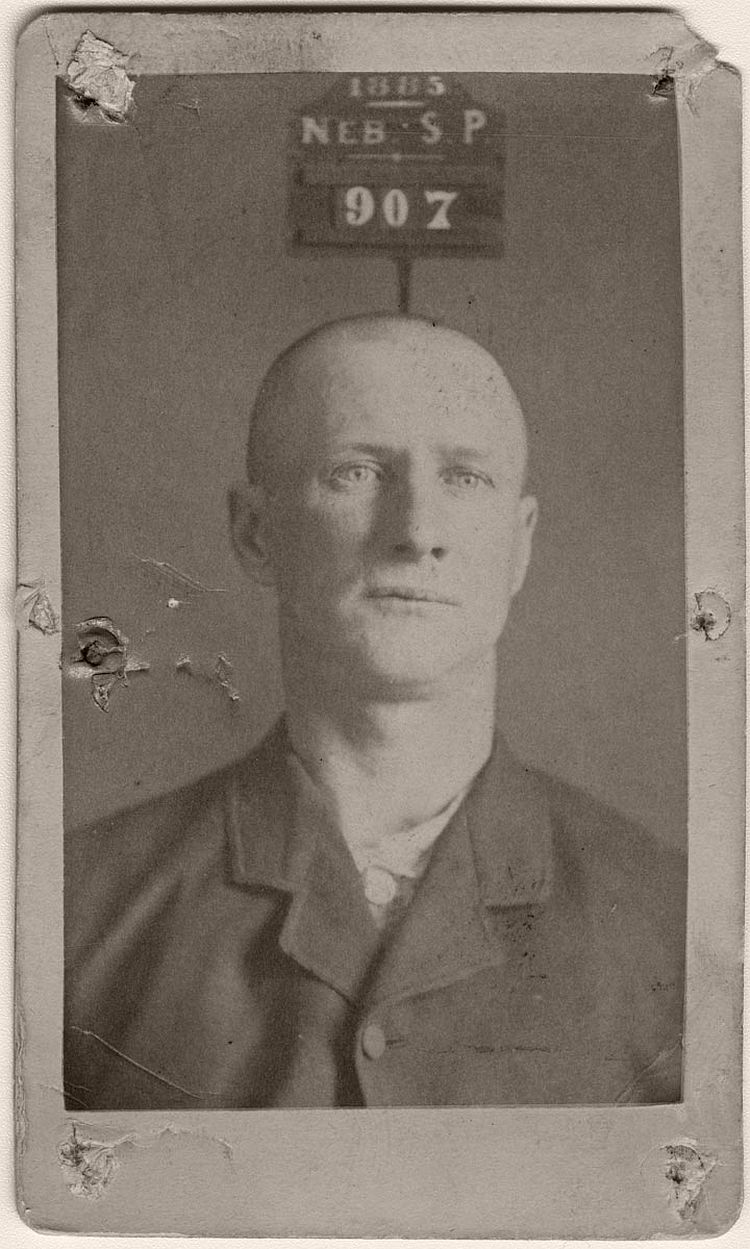 Detailed descriptions and mug shots were important to police and prison authorities. Criminals easily changed names and created numerous identities. Typically, three mug shots taken of each prisoner. One before their heads were shaved and a full-faced and profile image after their hair was removed. Women only had a full-face and profile image. Their hair was not cut. 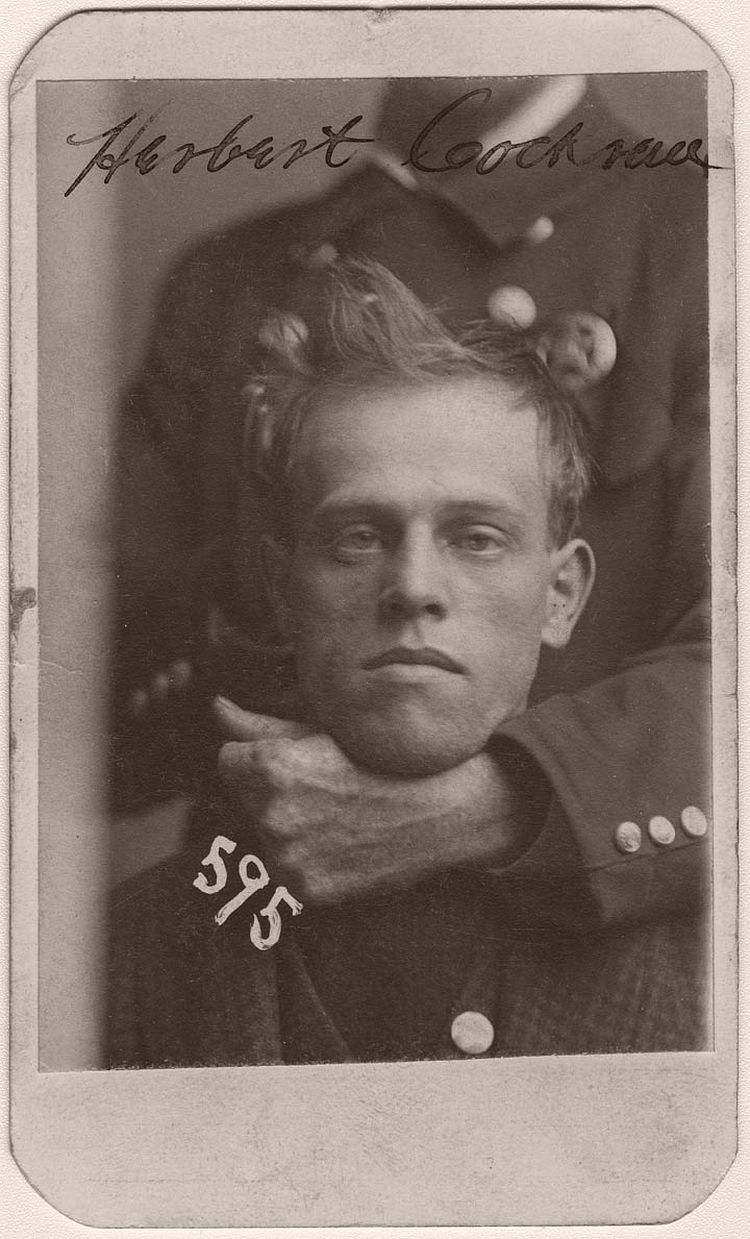 An unidentified member of the Omaha police force holds Herbert Cockran in a headlock during his mug shot. Cockran was arrested on November 24, 1899, for burglary. A tailor from Fairmont, Nebraska, Cockran had a slightly stooped build with a fair complexion and his eyebrows met at the root of his nose, according to the police description. 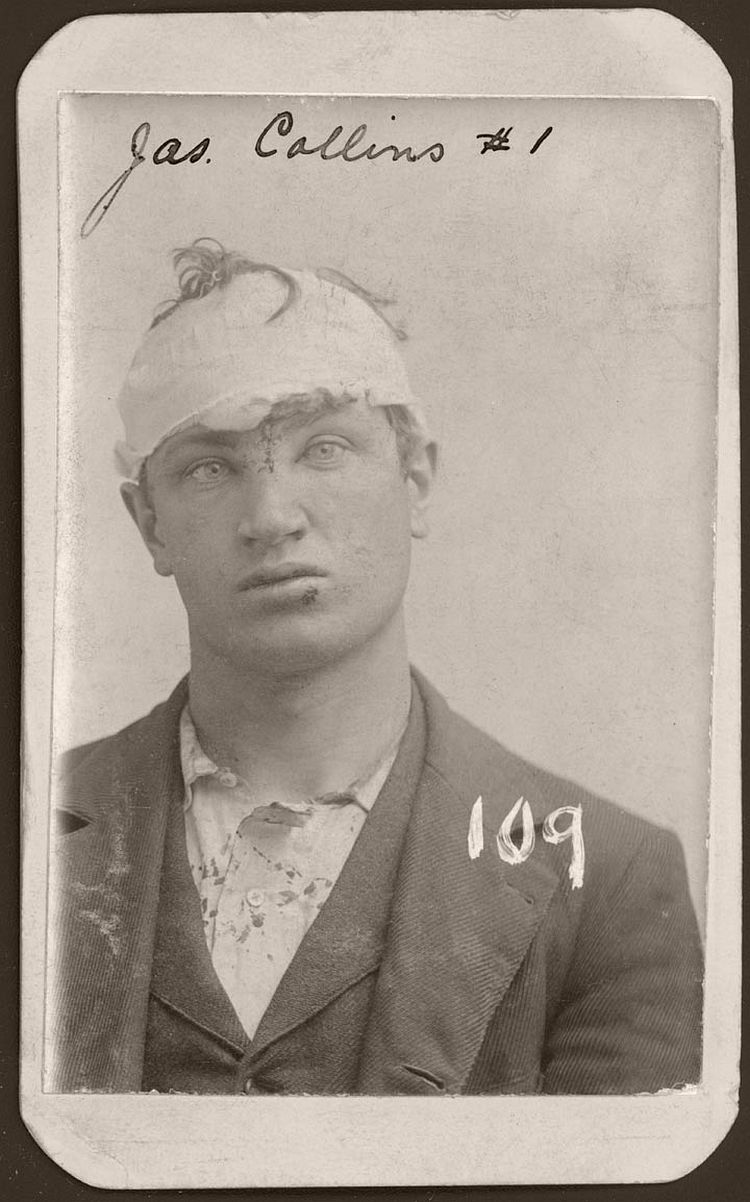 James Collins was arrested in Omaha in May 12, 1897 for burglary. In his mug shot, Collin’s head has been bandaged. According to the police record, Collins escaped and was rearrested. The 23 year-old Omaha tailor was sent to the Nebraska State Prison on March 19, 1898, to serve a five-year sentence. 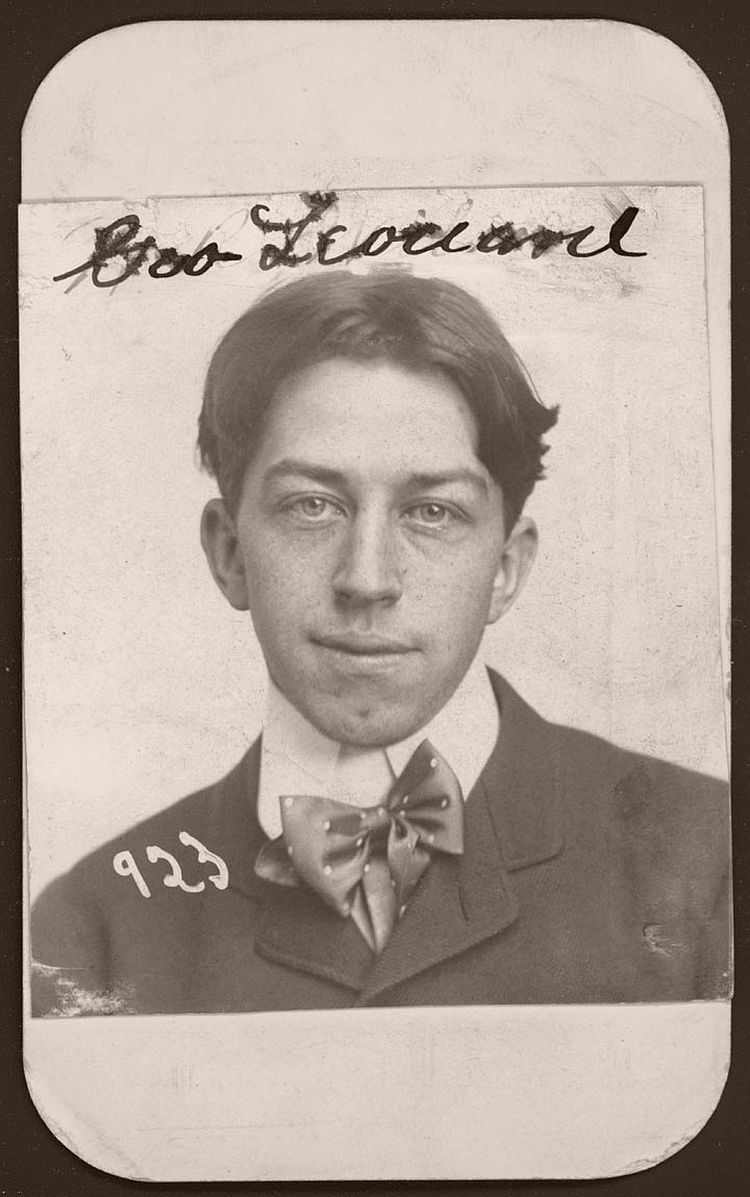 George Leonard appears quite harmless with his boyish looks and freckles. The Omaha bookkeeper was arrested for burglary on December 23, 1901. His large silk bowtie sits slightly askew against his stiffly collared shirt. 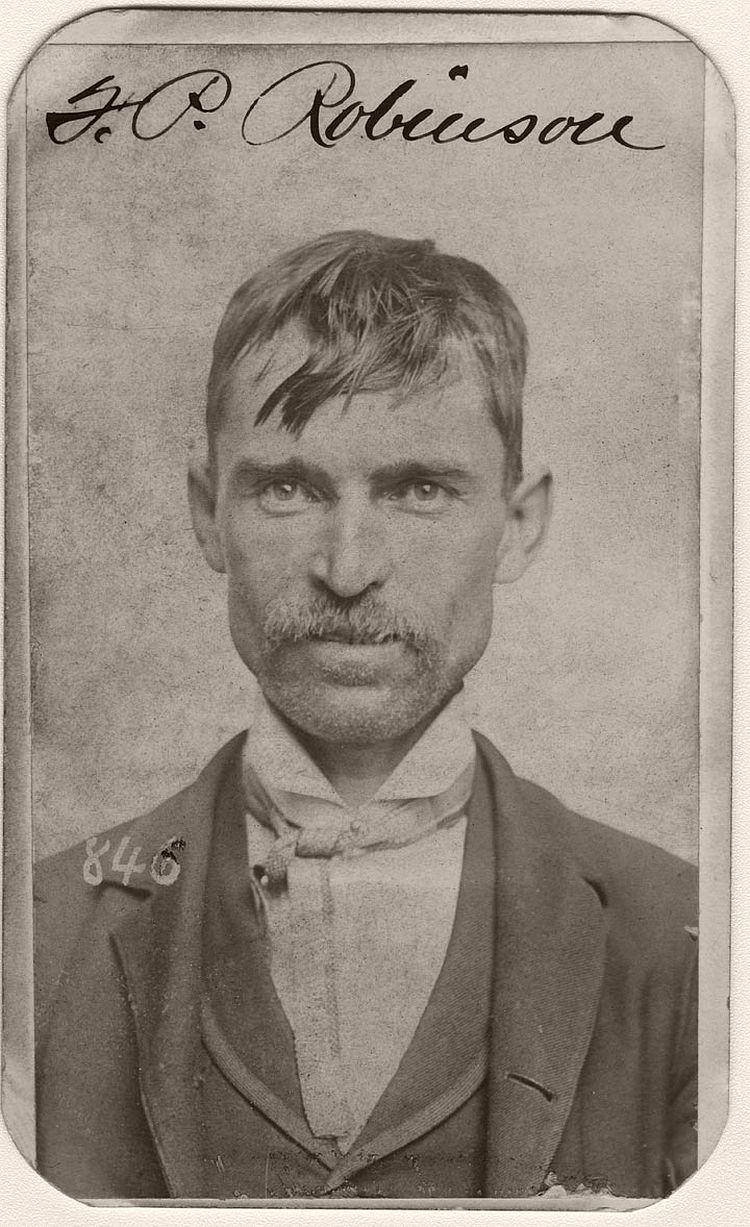 F.P. Robinson attempted to pay for a glass of beer in a lower Douglas Street saloon in Omaha with a Mexican dollar on November 21, 1901. The beer cost only a nickel and Robinson received 95 cents of American money in change. At the time, the foreign dollar looked very similar to the American currency, but was only worth about 45 cents. This clever money scam left Robinson 50 cents and a glass of lager ahead of the game, until he was arrested. 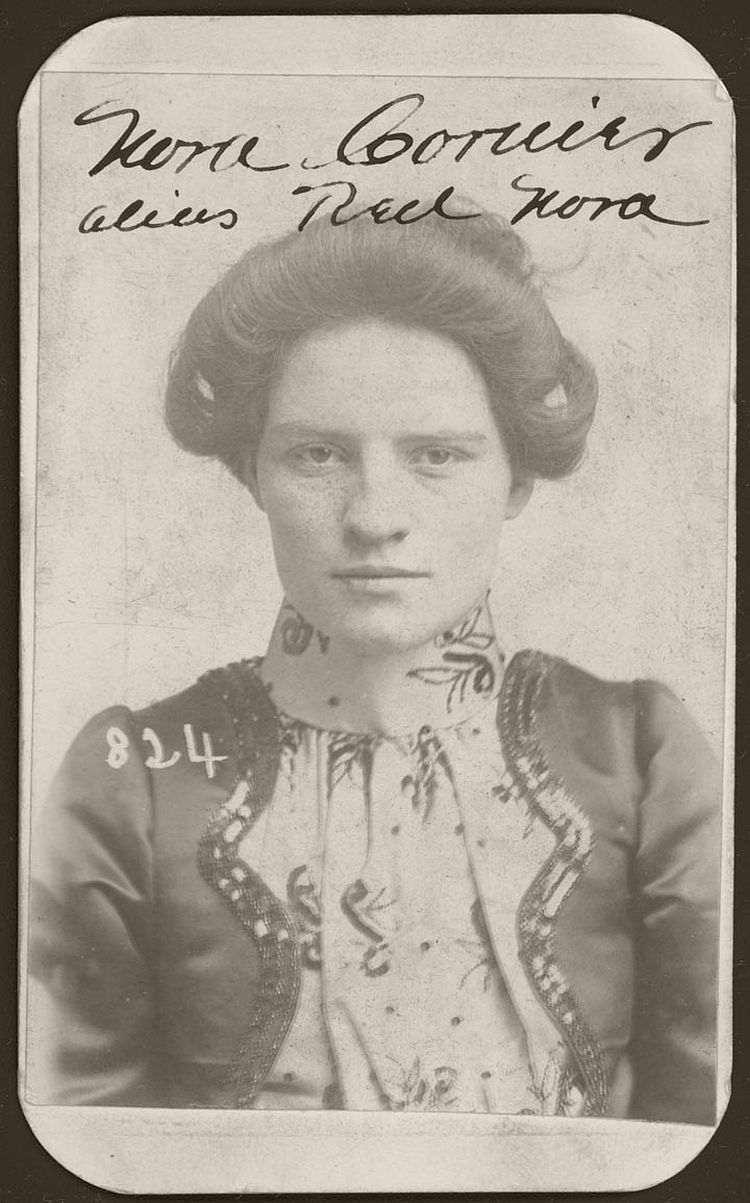 Meet Nora Courier, better known as “Red Nora.” On March 31, 1901, Omaha police arrested Nora for stealing a horse. According to police court records, she was 22 years old and stood 5 feet, 3 inches tall. She had slate blue eyes and a scar on the center of her forehead.