The term lumberjack is of Canadian derivation. The first attested use of the word comes from an 1831 letter to the Cobourg Star and General Advertiser in the following passage: “my misfortunes have been brought upon me chiefly by an incorrigible, though perhaps useful, race of mortals called LUMBERJACKS, whom, however, I would name the Cossack’s of Upper Canada, who, having been reared among the oaks and pines of the wild forest, have never been subjected to the salutary restraint of laws.”

Lumberjacks worked in lumber camps and often lived a migratory life, following timber harvesting jobs as they opened. Being a lumberjack was seasonal work. Lumberjacks were exclusively men. They usually lived in bunkhouses or tents. Common equipment included the axe and cross-cut saw. Lumberjacks could be found wherever there were vast forests to be harvested and a demand for wood, most likely in Scandinavia, Canada, and parts of the United States. In the U.S., many lumberjacks were of Scandinavian ancestry, continuing the family tradition. American lumberjacks were first centred in north-eastern states such as Maine. They then followed the general westward migration on the continent to the Upper Midwest, and finally the Pacific Northwest. Stewart Holbrook documented the emergence and westward migration of the classic American lumberjack in his first book, Holy Old Mackinaw: A Natural History of the American Lumberjack. He often wrote colourfully about lumberjacks in his subsequent books, romanticizing them as hard-drinking, hard-working men. Logging camps were slowly phased out between World War II and the early 1960s as crews could by then be transported to remote logging sites in motor vehicles. 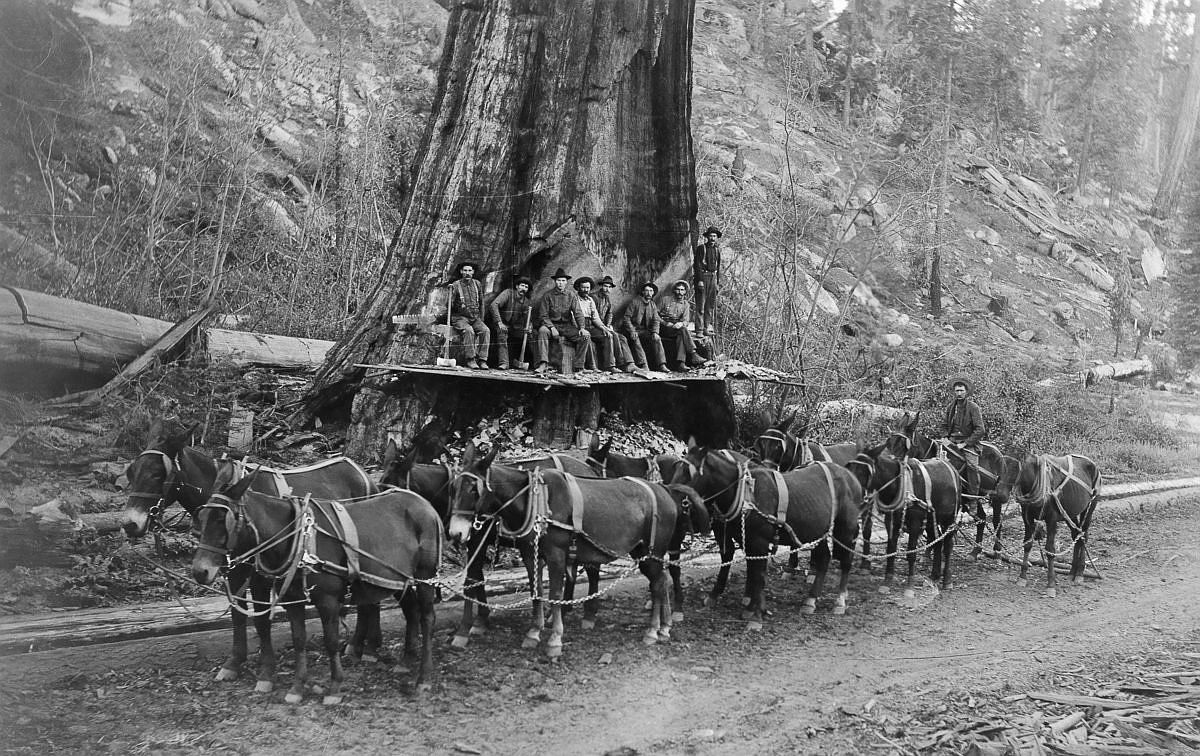 1917 Loggers and a 10-mule team prepare to fell a giant Sequoia tree in California. Image: A. R. Moore/National Geographic Creative/Corbis 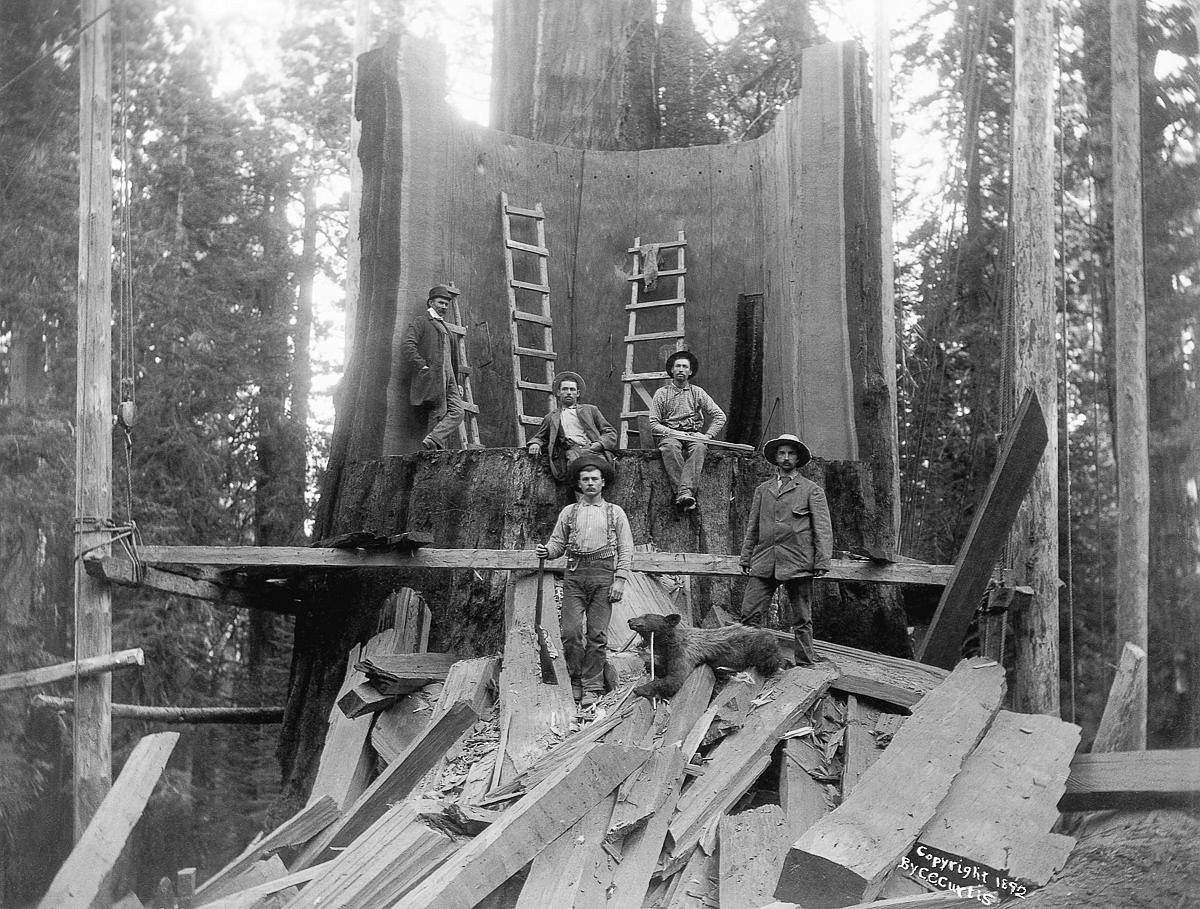 c. 1892 Loggers stand in the trunk of a tree they chopped down at Camp Badger in Tulare County, California. The tree was logged for the World’s Columbian Exposition in Chicago. Image: Corbis 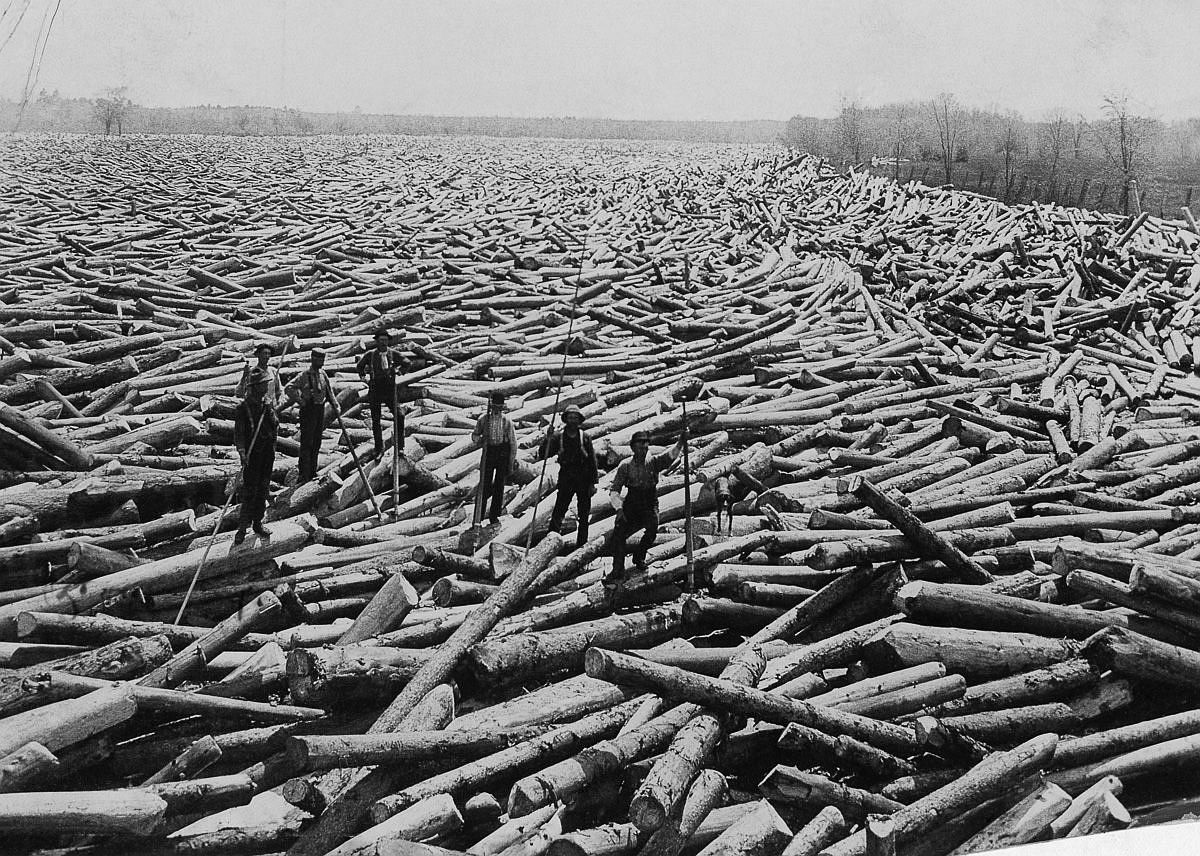 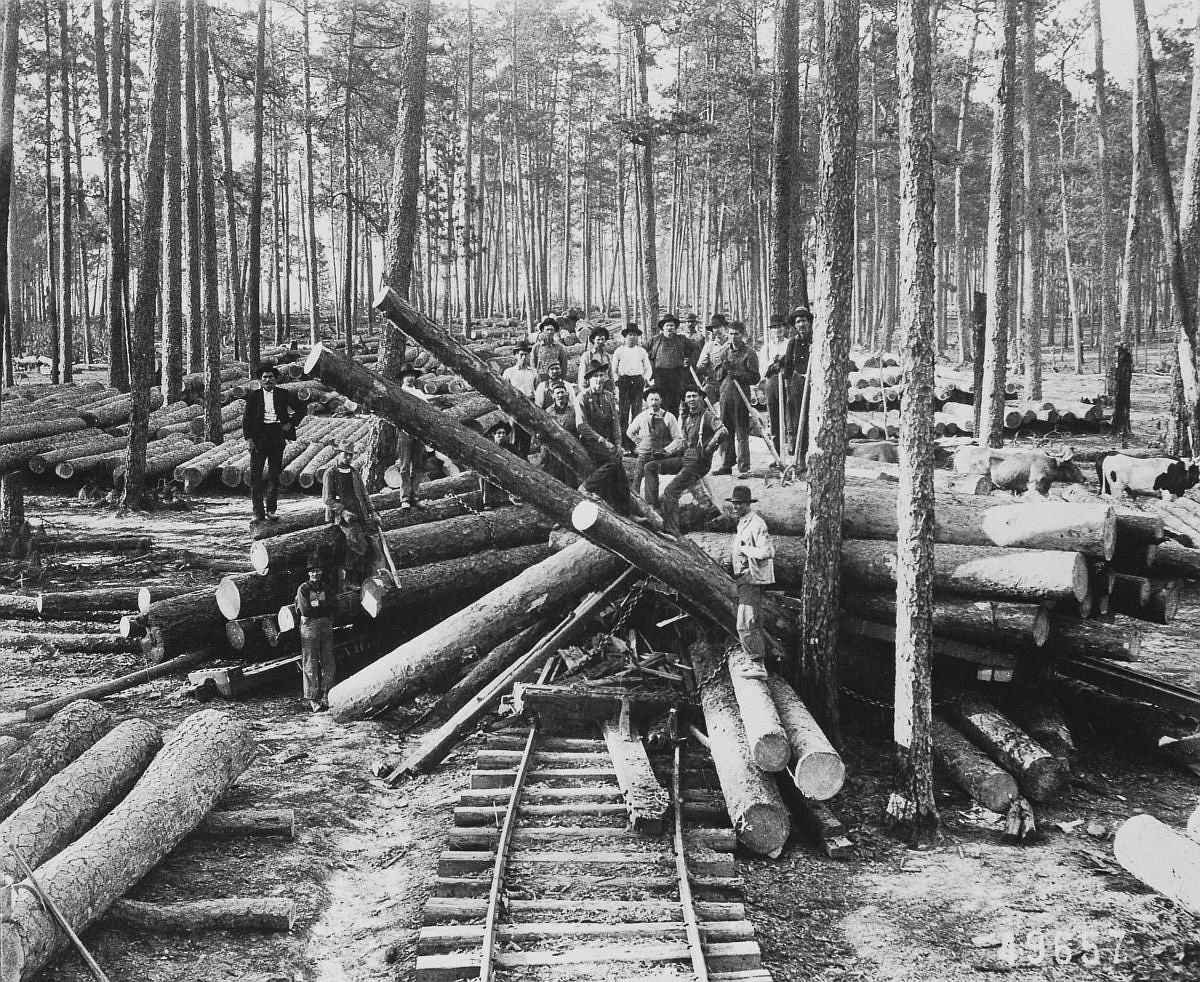 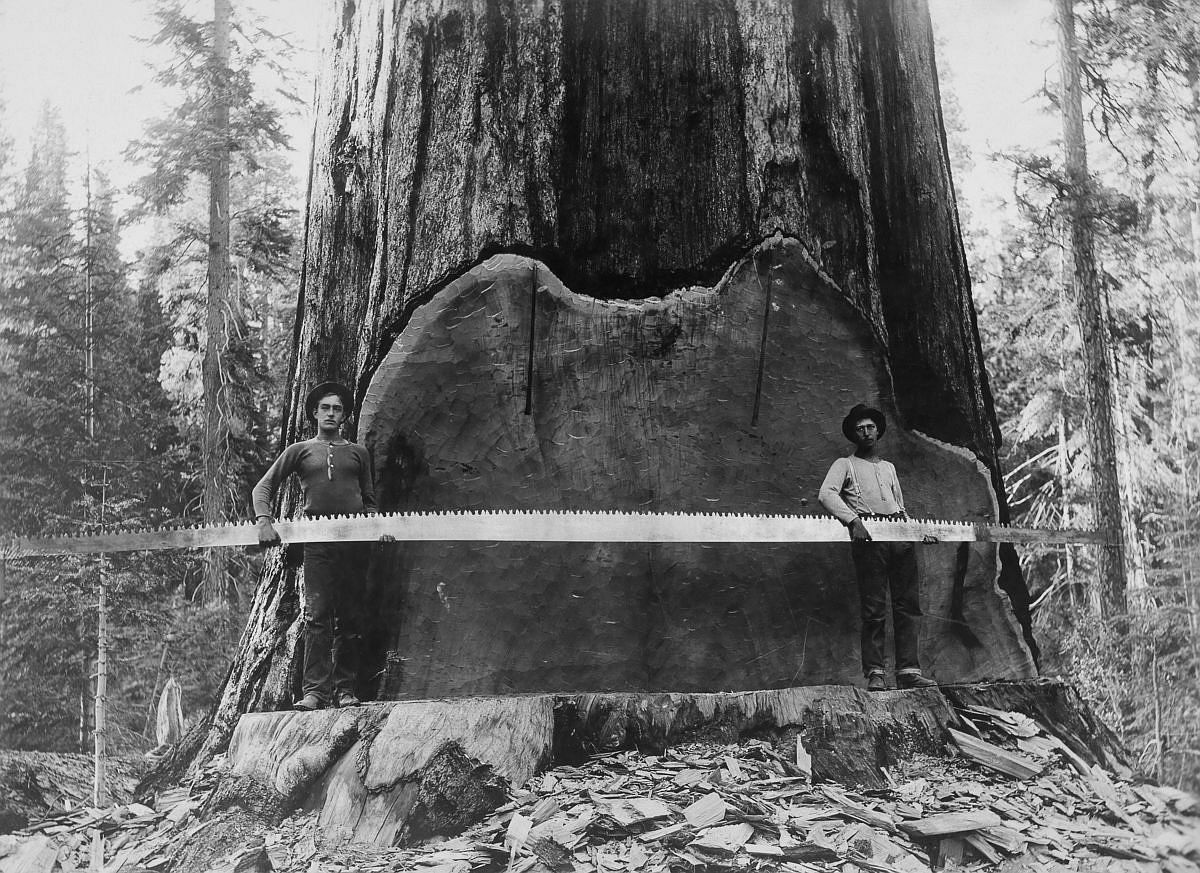 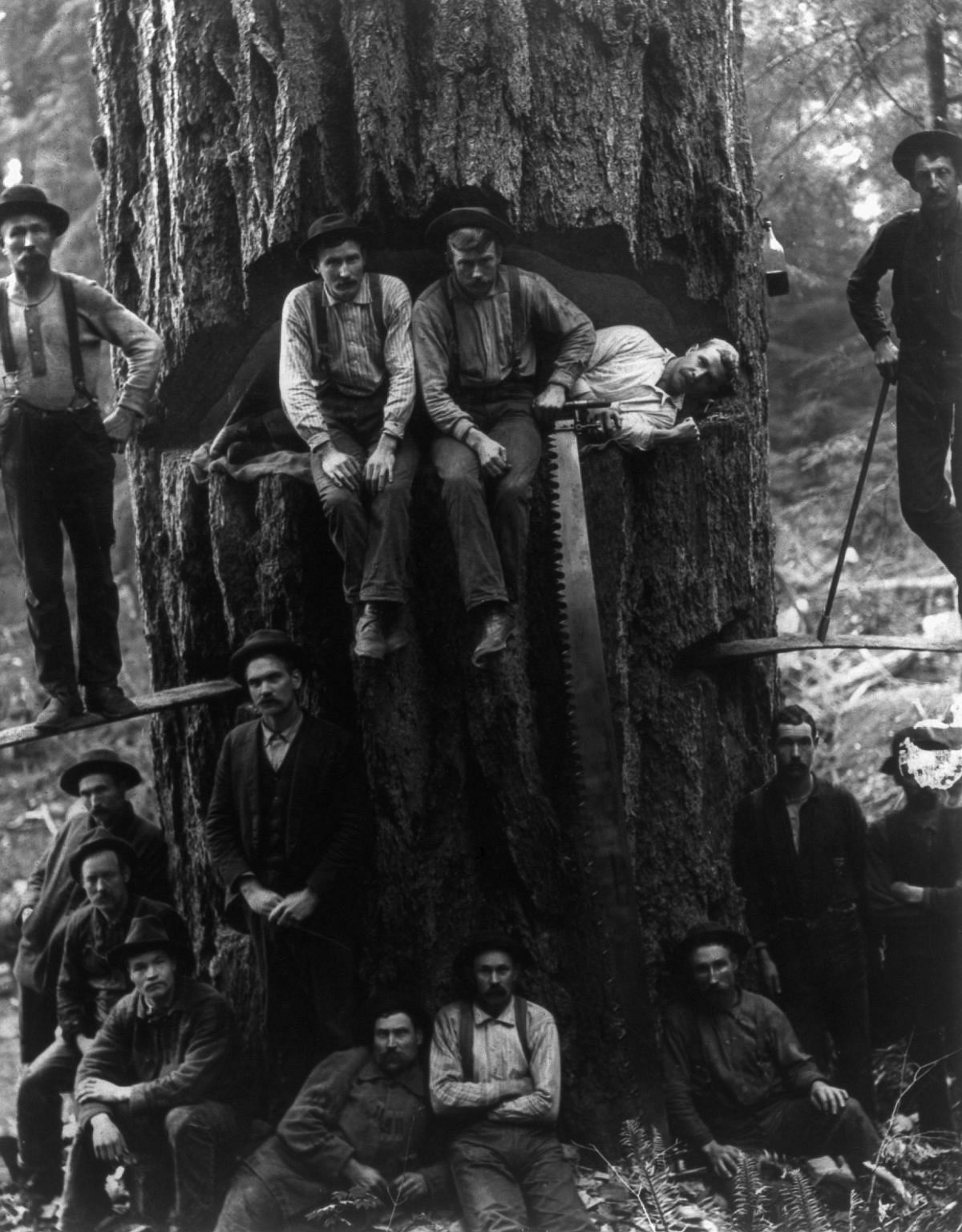 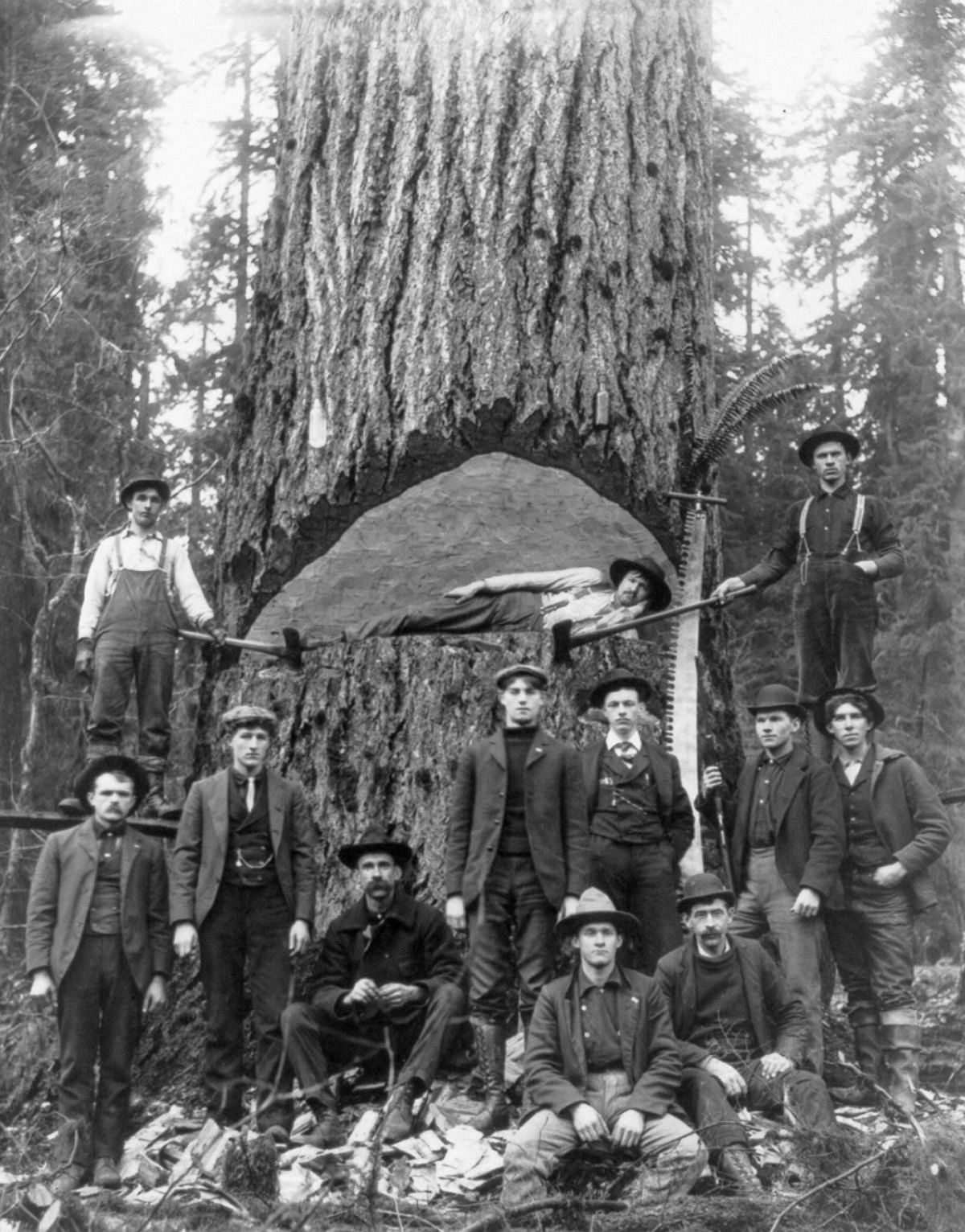 1902 Lumberjacks pose with a fir tree in Washington. Image: Library of Congress 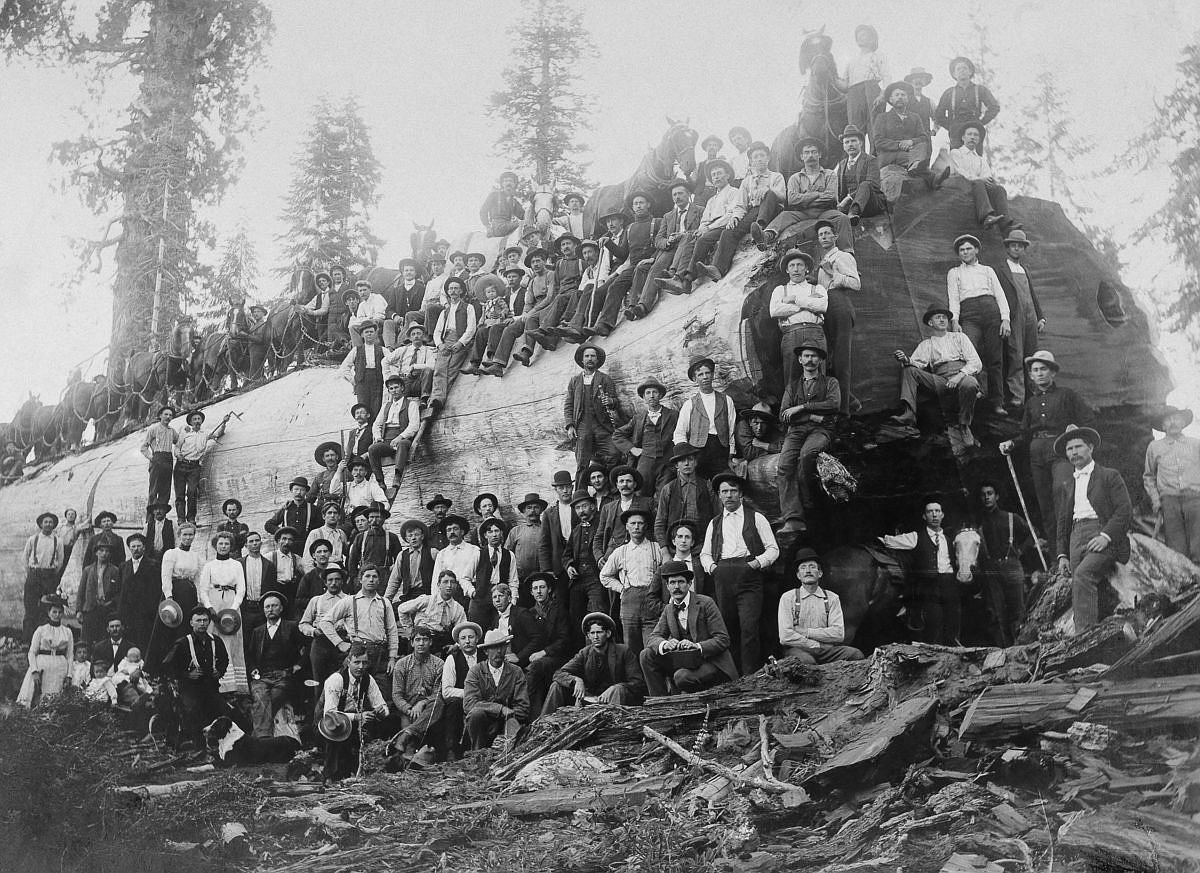 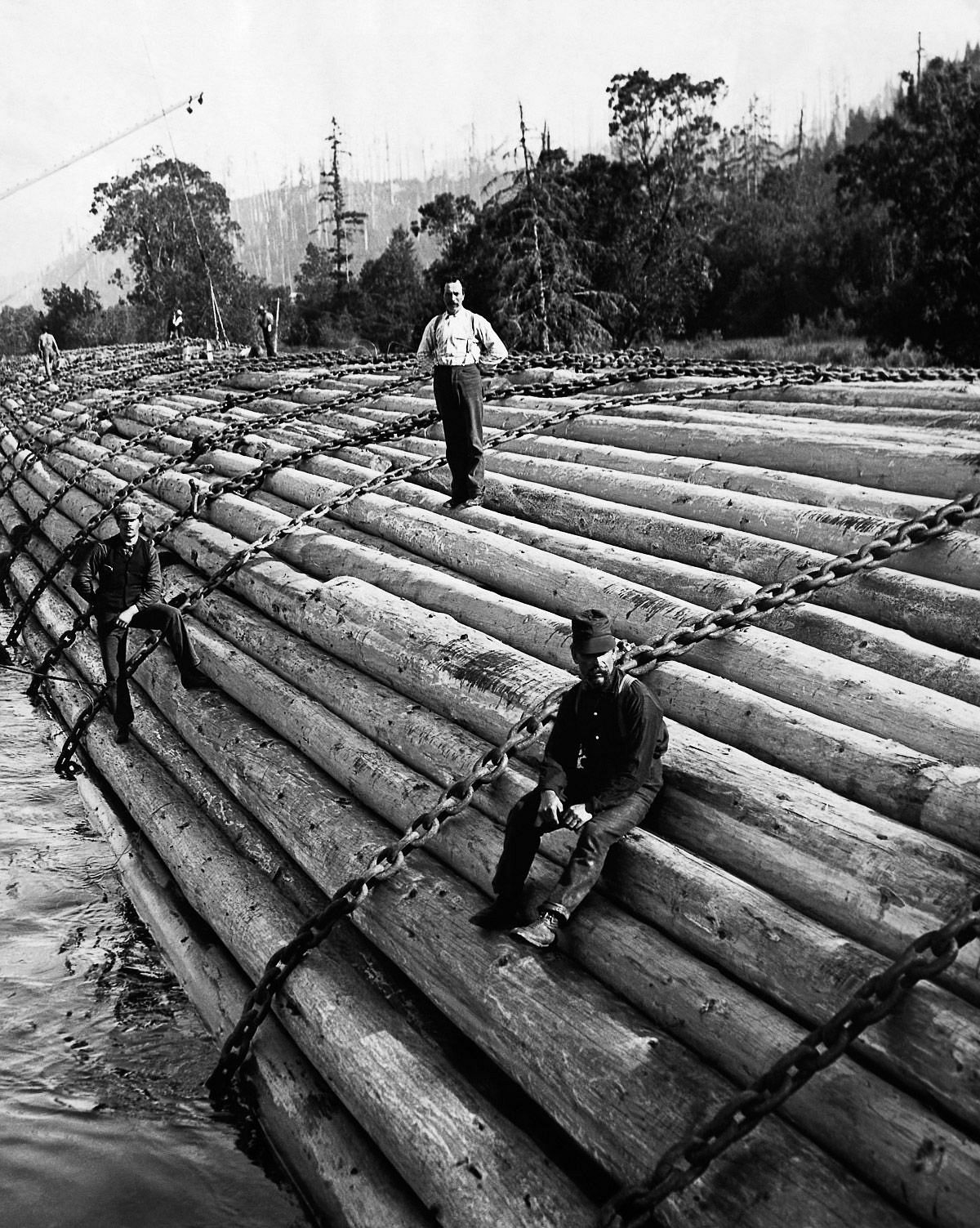 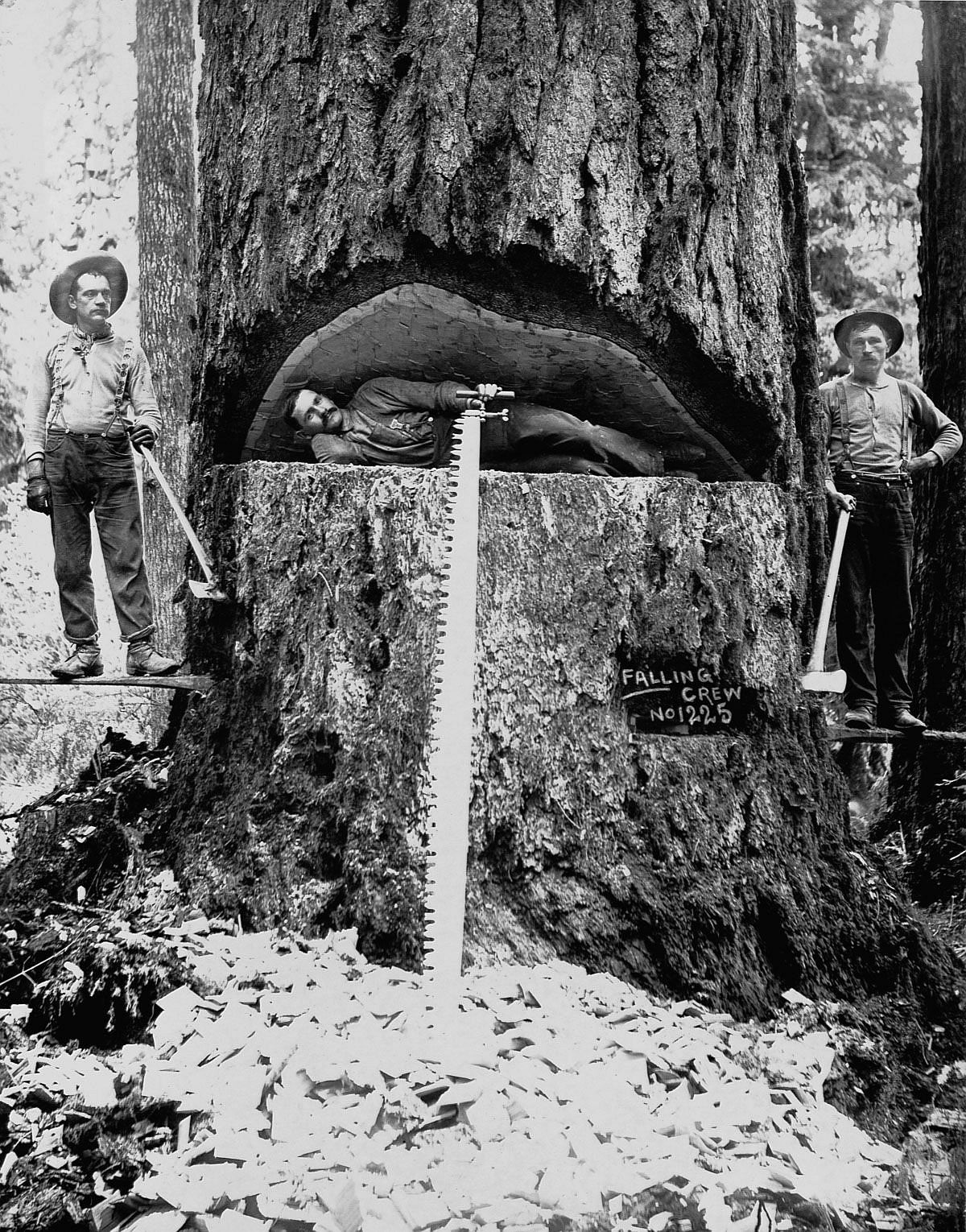 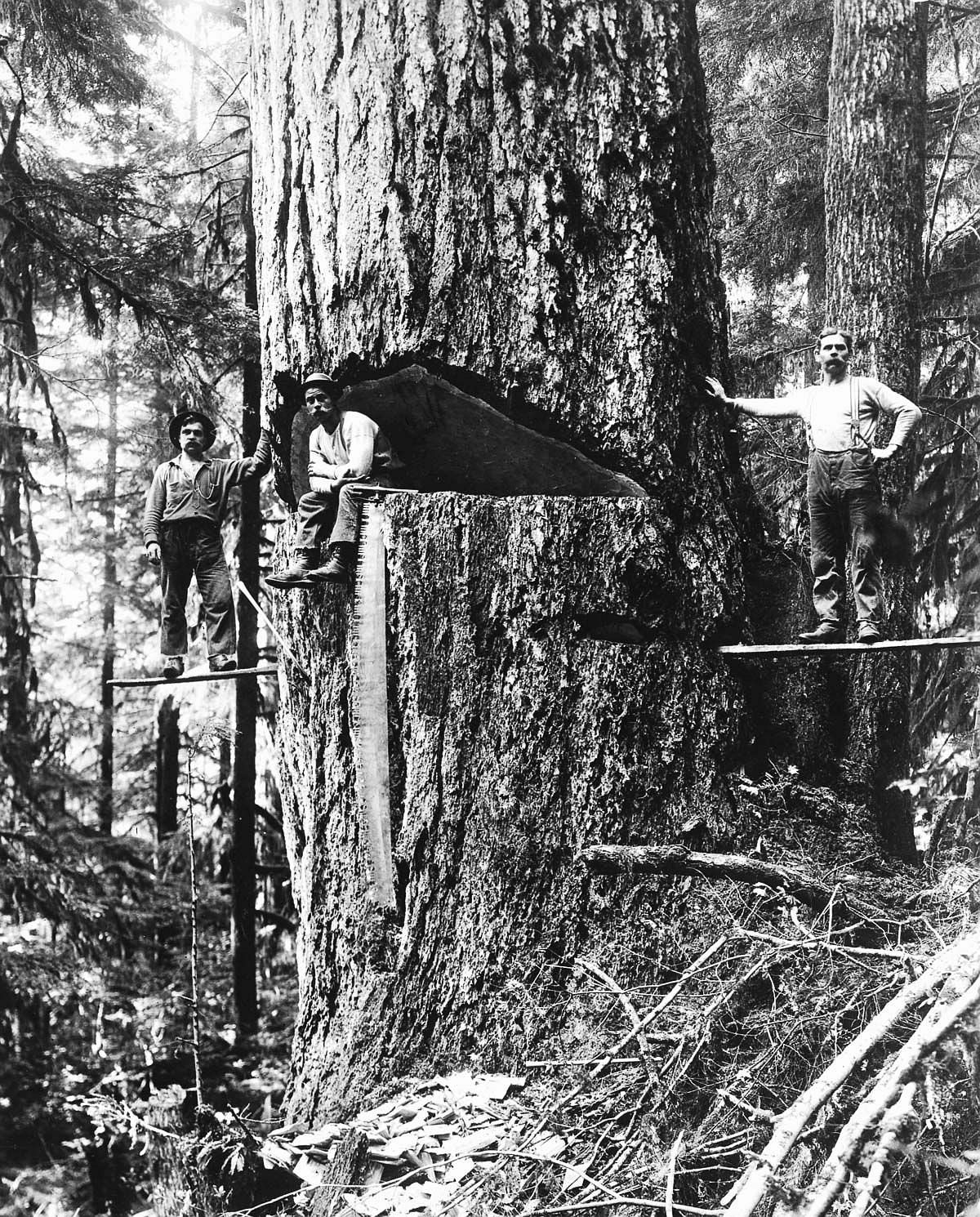 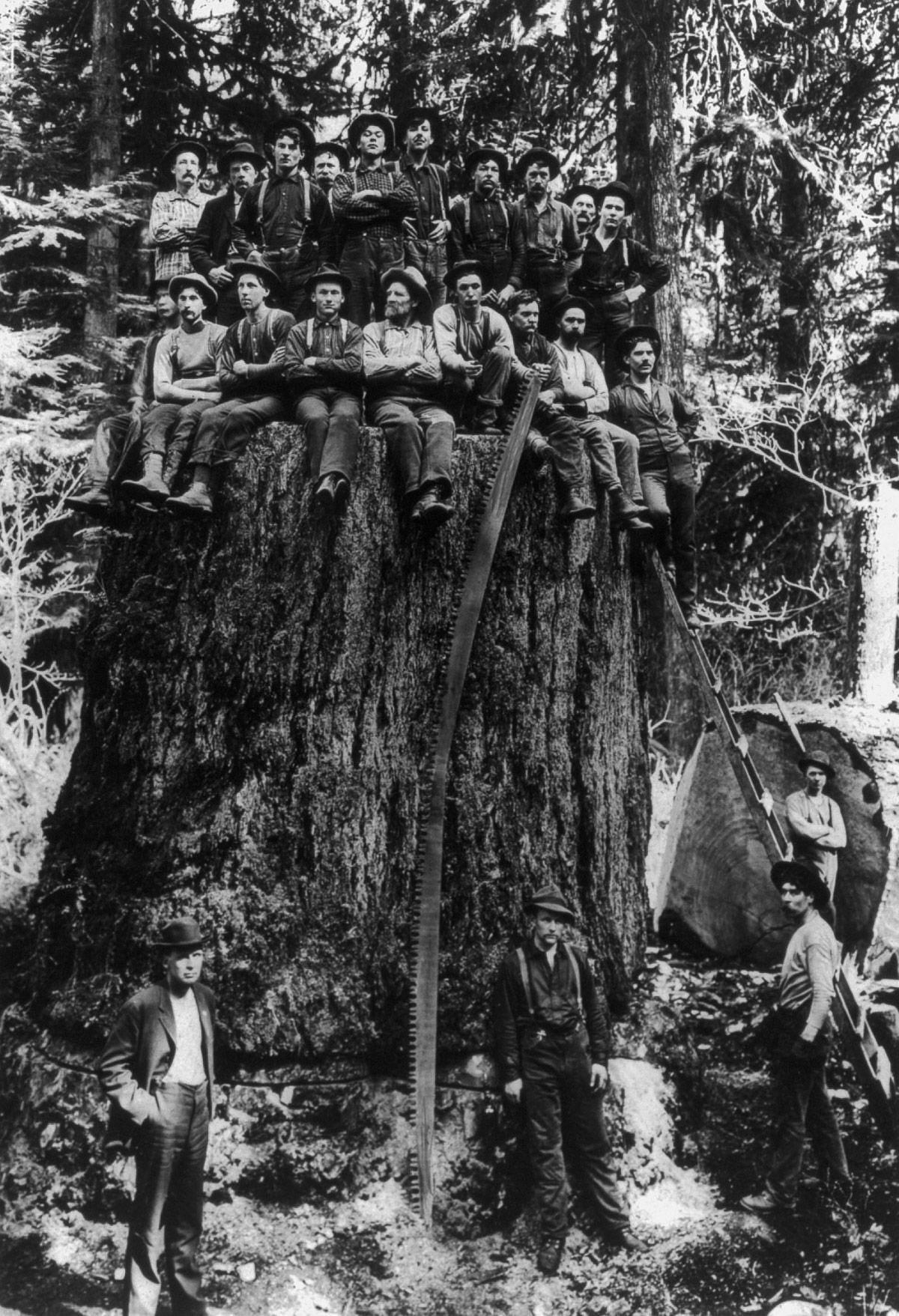 1904 Lumberjacks pose on the stump of a tree which was displayed at St. Louis World’s Fair. Image: Library of Congress 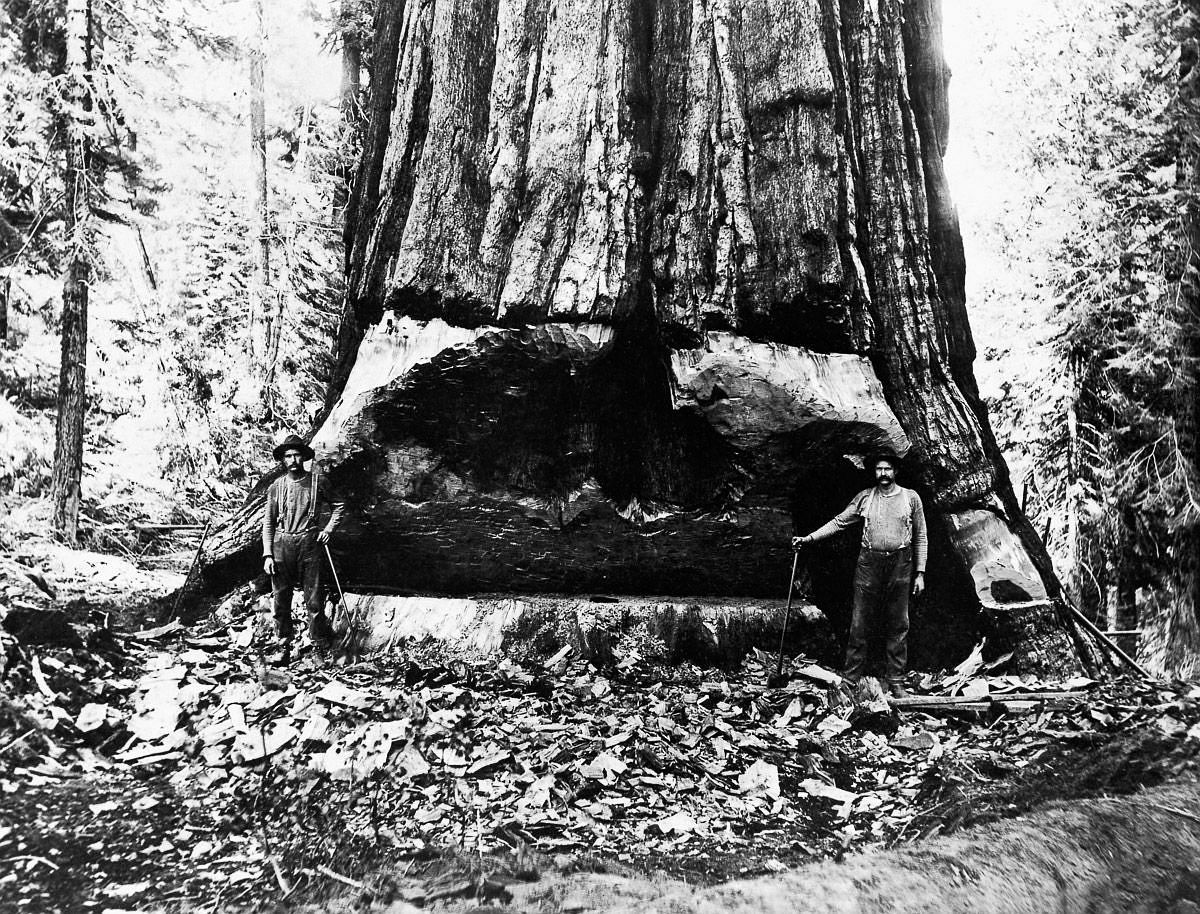 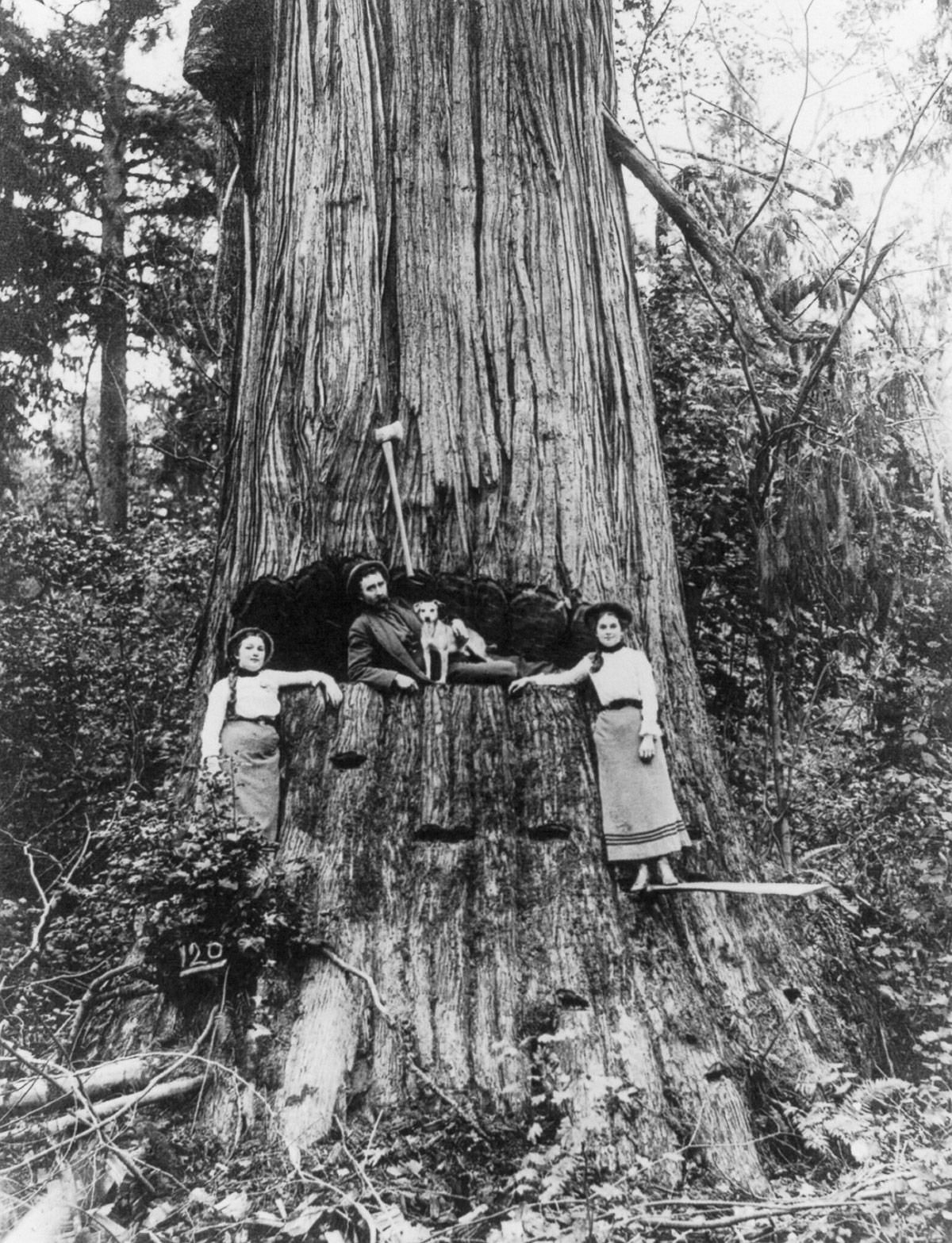 1905 A lumberjack and two women pose in front of a tree near Seattle, Washington. Image: Library of Congress