By 1848 the United States had acquired official title to the contiguous land stretching westward to the Pacific, south to the Rio Grande, and north to the 49th parallel. Americans had long since explored and settled in many of these areas, but legitimate possession created an impetus for development that began to crystallize as other timely occurrences brought a greater influx of people to the West. The religious persecution of the Mormons had led them to begin their migration westward by this time. The discovery of gold would soon draw thousands more across the country.

This transition from a “wild” western frontier into organized segments of a federal union is documented in photographs. Private citizens and Government officials took the recently developed camera on their western adventures to record nature’s curious sights and the marks that they as men and women made on the landscape.

It is indeed a wonder that so many photographs have survived the hardships of the western experience, for early negatives were made of large glass plates. Some of these photographs have found their way into the National Archives as record materials of several Federal bureaus and offices, such as the Bureaus of Land Management, Indian Affairs, Public Roads, Weather, Agricultural Economics, and Reclamation; the Fish and Wildlife Service, the Geological Survey, boundary and claims commissions and arbitrations, the Corps of Engineers, the Forest Service, and the Signal Corps. 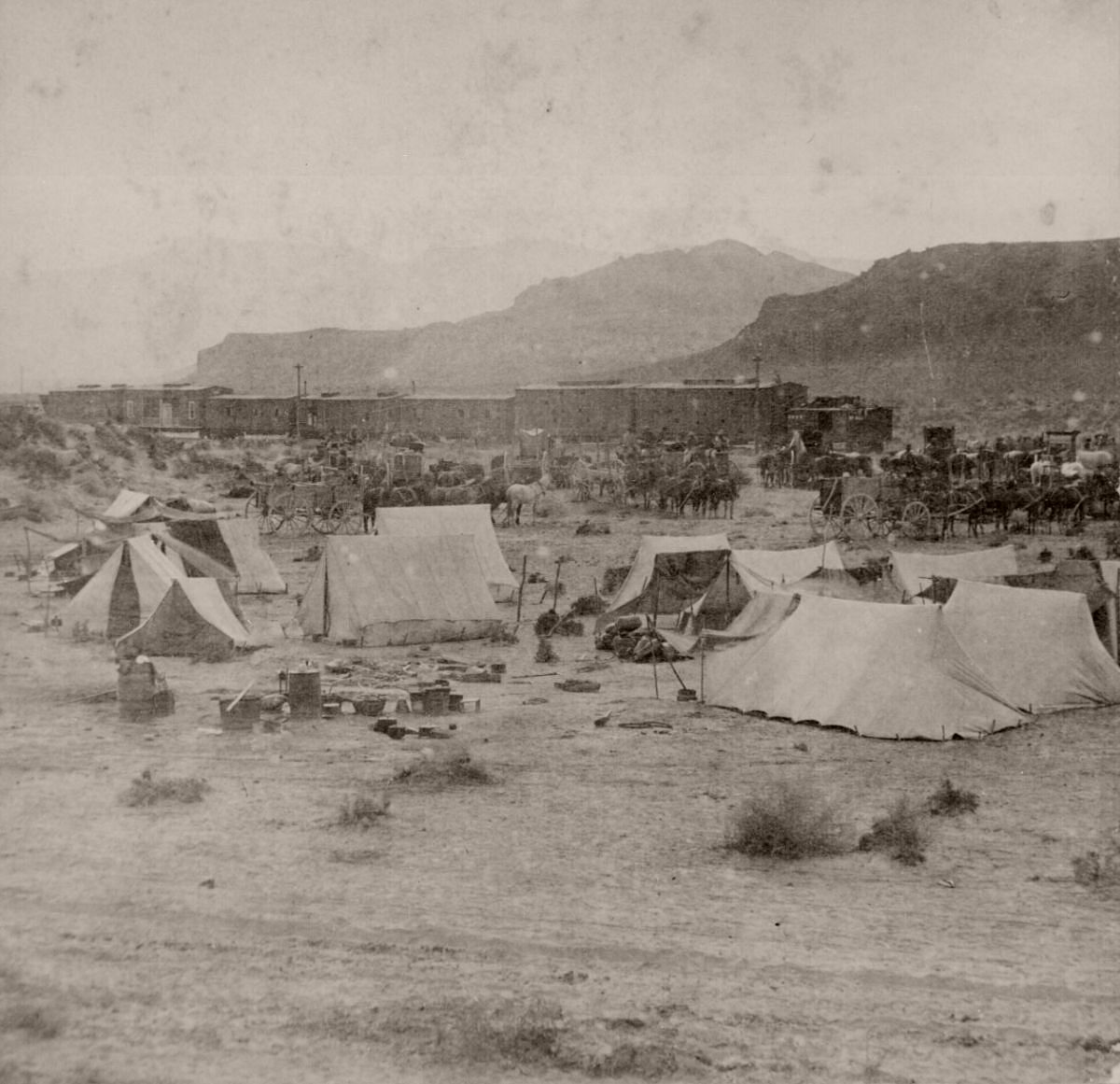 End of the Track. Near Humboldt River Canyon, Nevada. Campsite and train of the Central Pacific Railroad at foot of mountains, 1868. 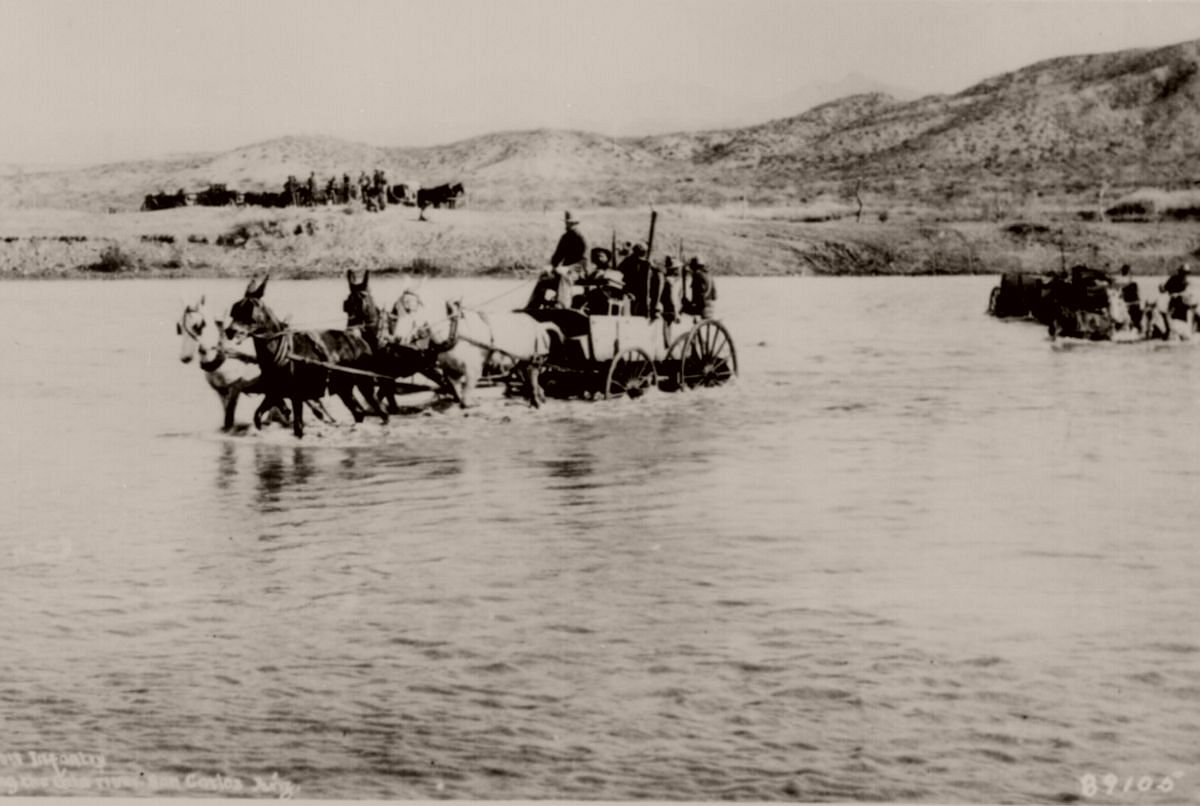 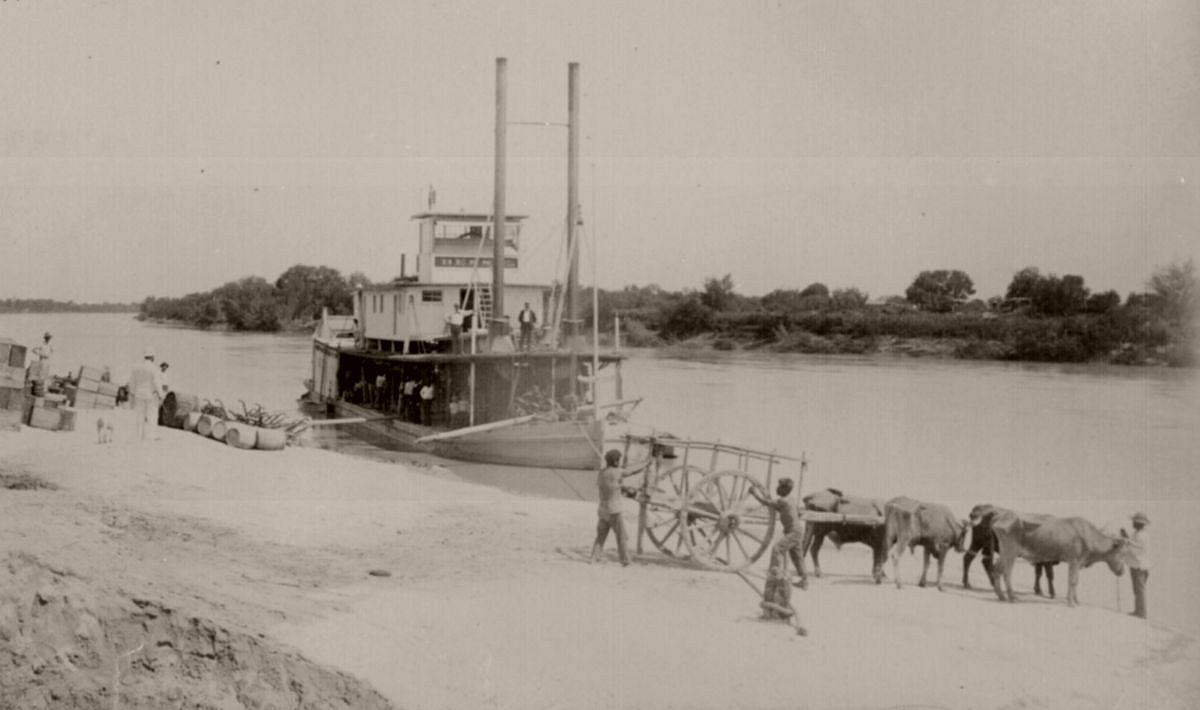 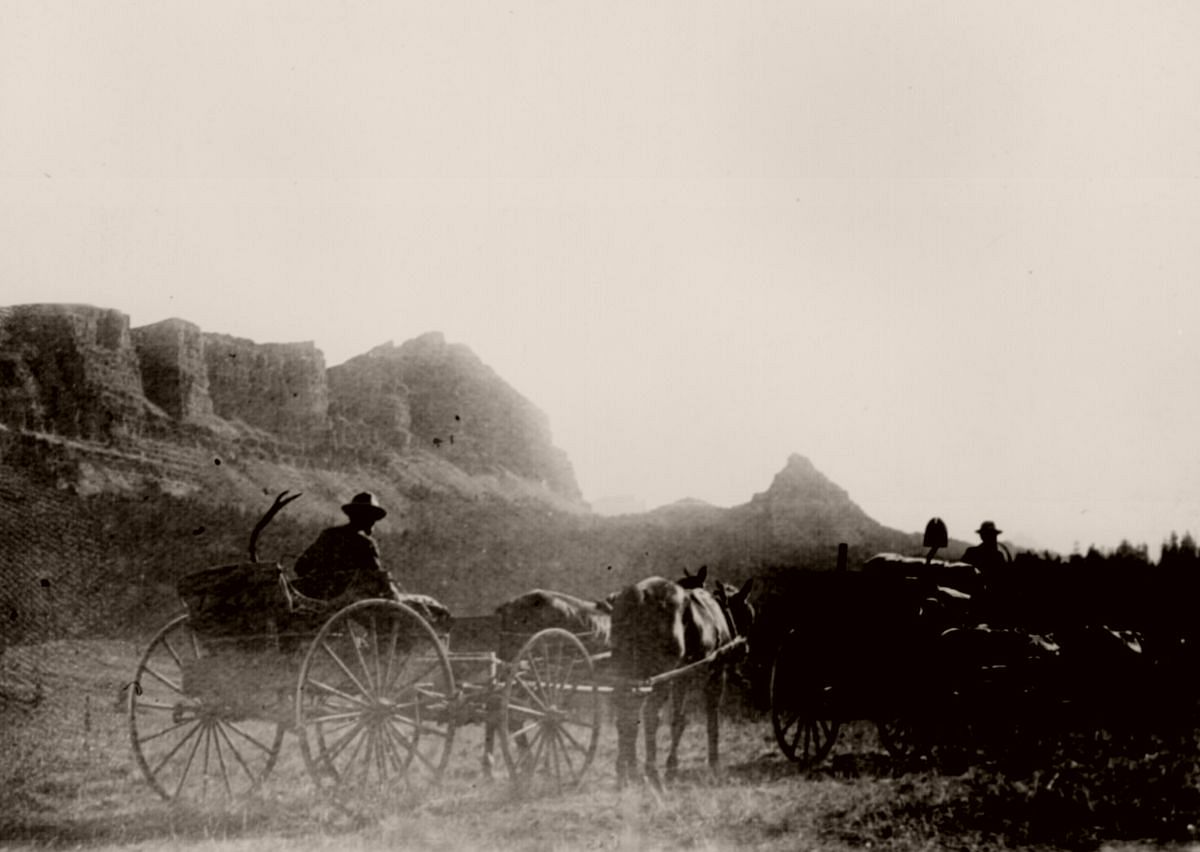 Construction workers on the military road, from Fort Washakie to Buffalo Fork near the Continental Divide, drive their wagonload of equipment up the summit of To-Gwo-Tee Pass, Wyo. Terr., 1898. 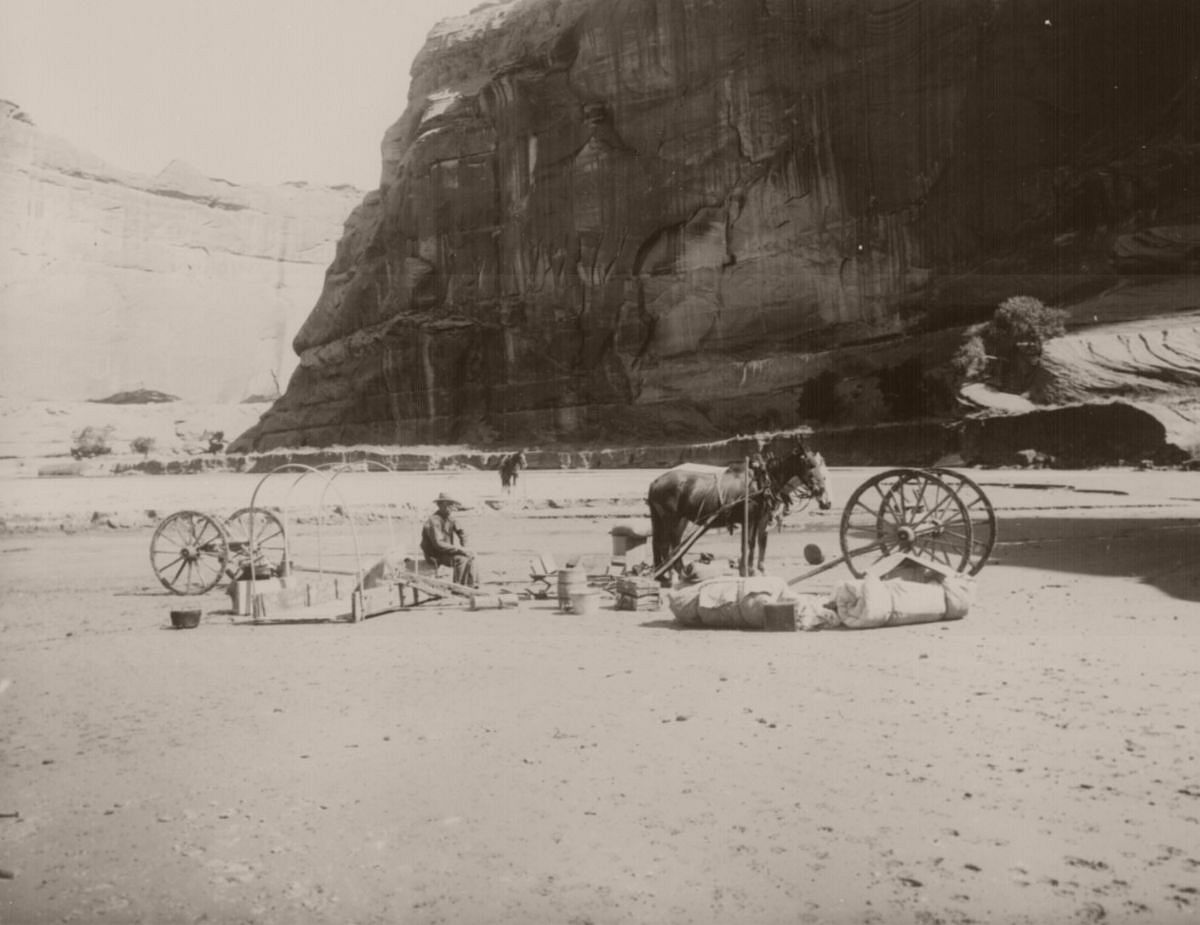 Man with parts of his wagon and equipment on muddy floor of Canyon de Chelly, Navajo Reservation, Ariz. Terr. September, 1903. 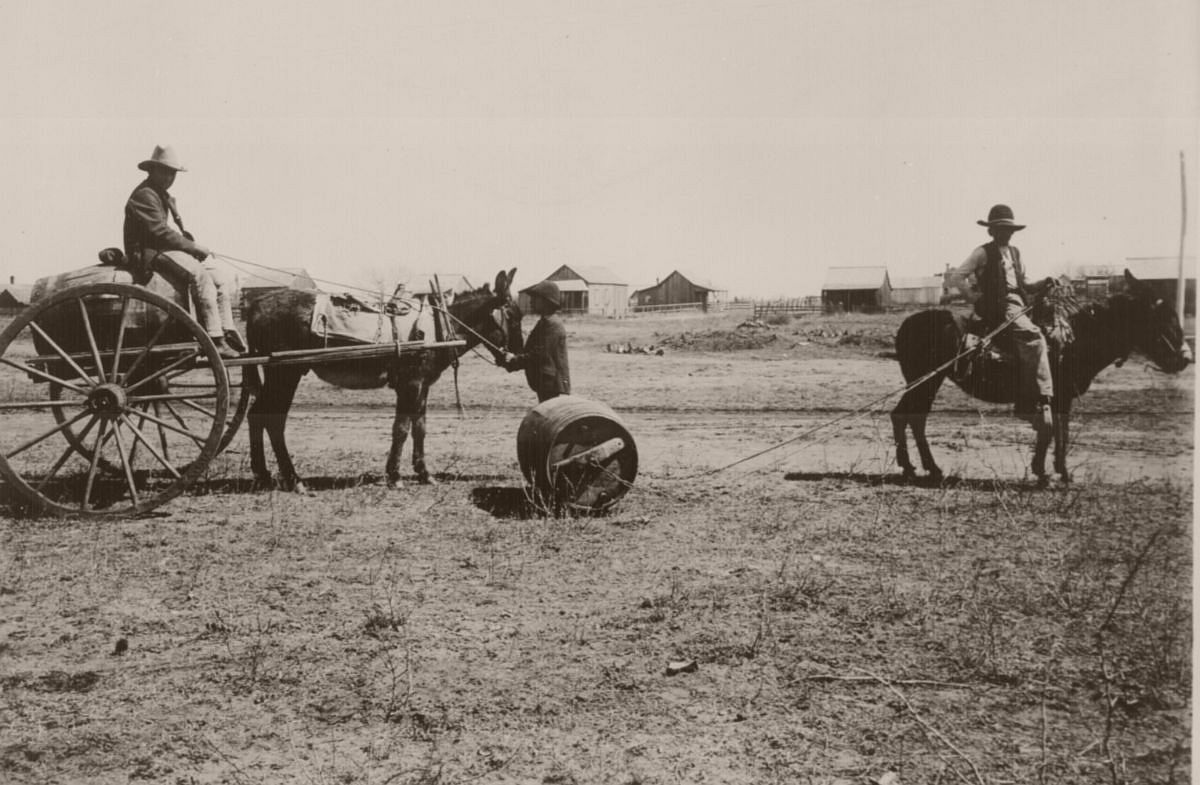 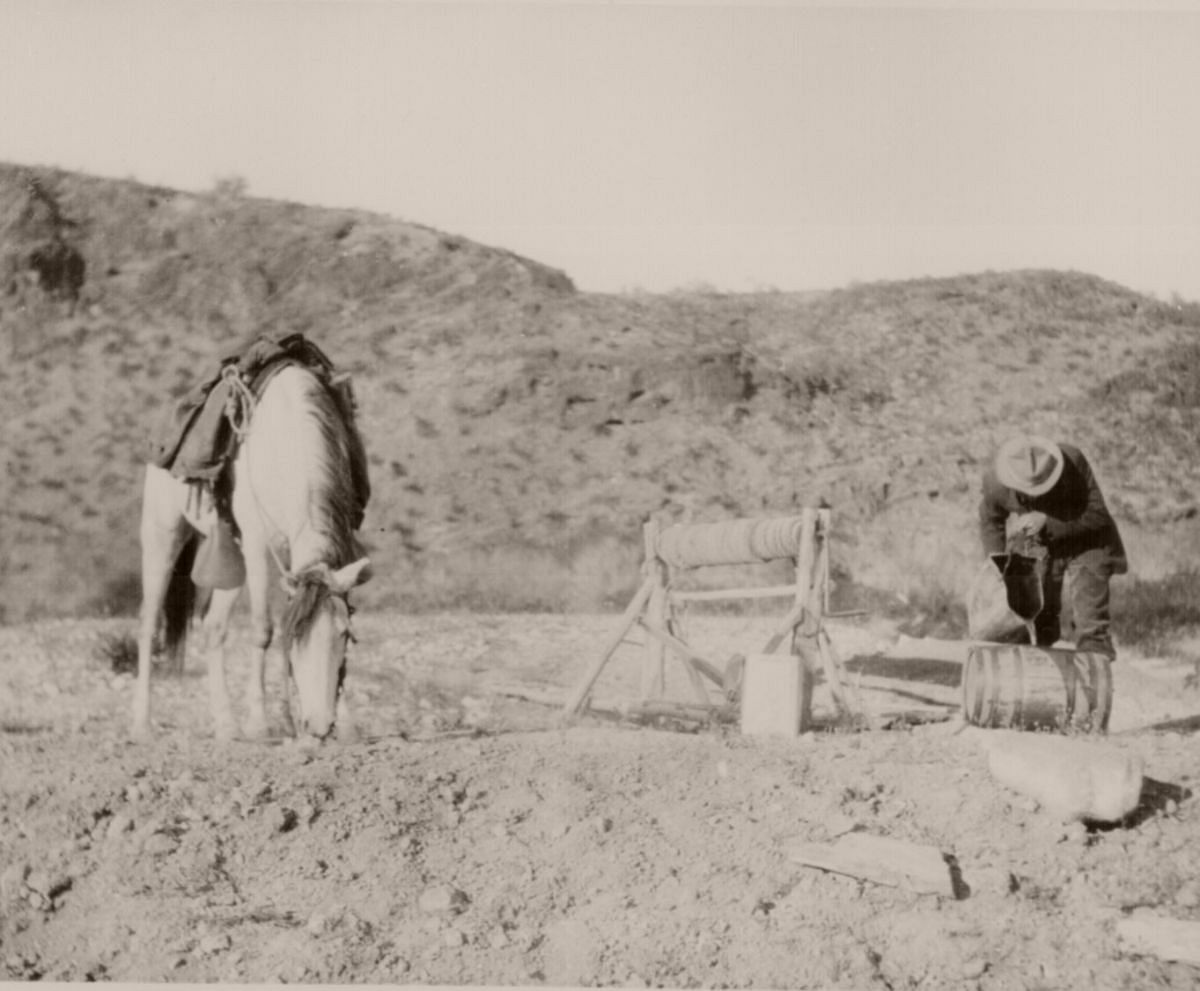 A rider fills his keg from a desert well 30 miles north of Palomas, Ariz. Terr. His horse refreshes himself nearby. April 5, 1907. 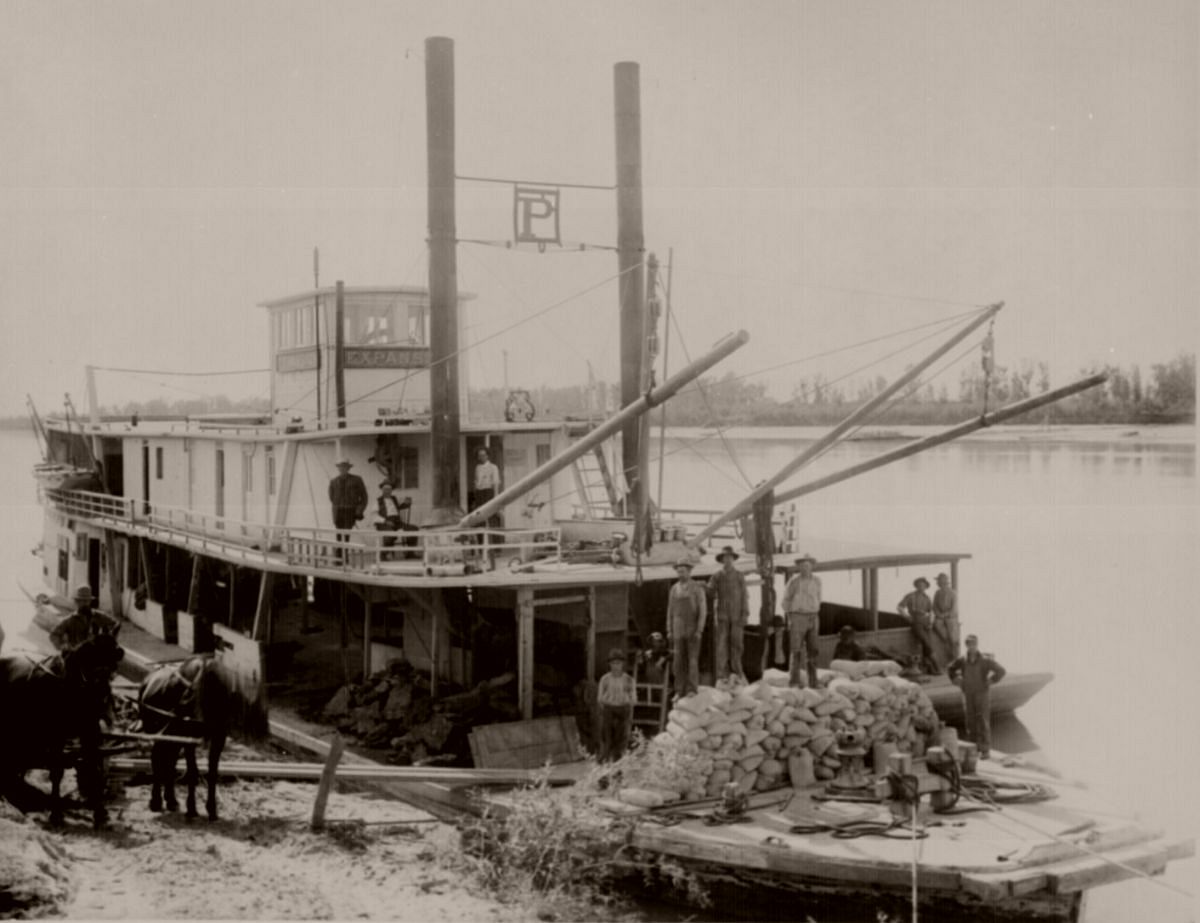 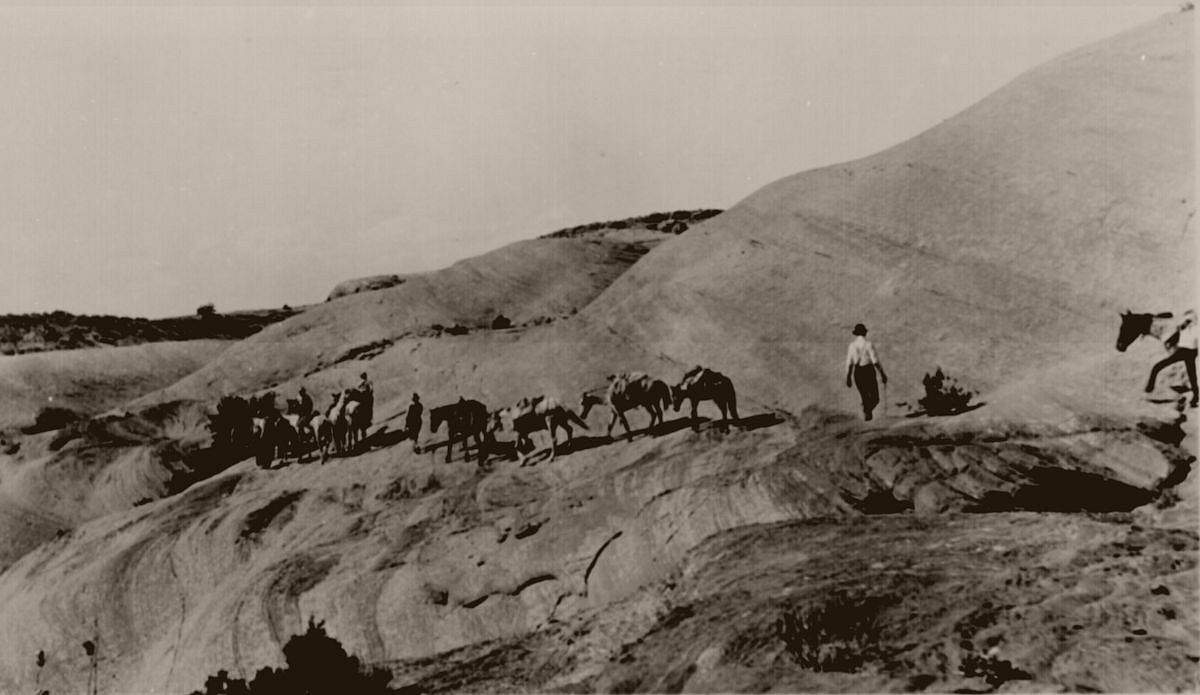 Discovery party and horses on hot, slick rocks west of Navajo Mountain on their way to Rainbow Bridge, Utah. August 13, 1909. 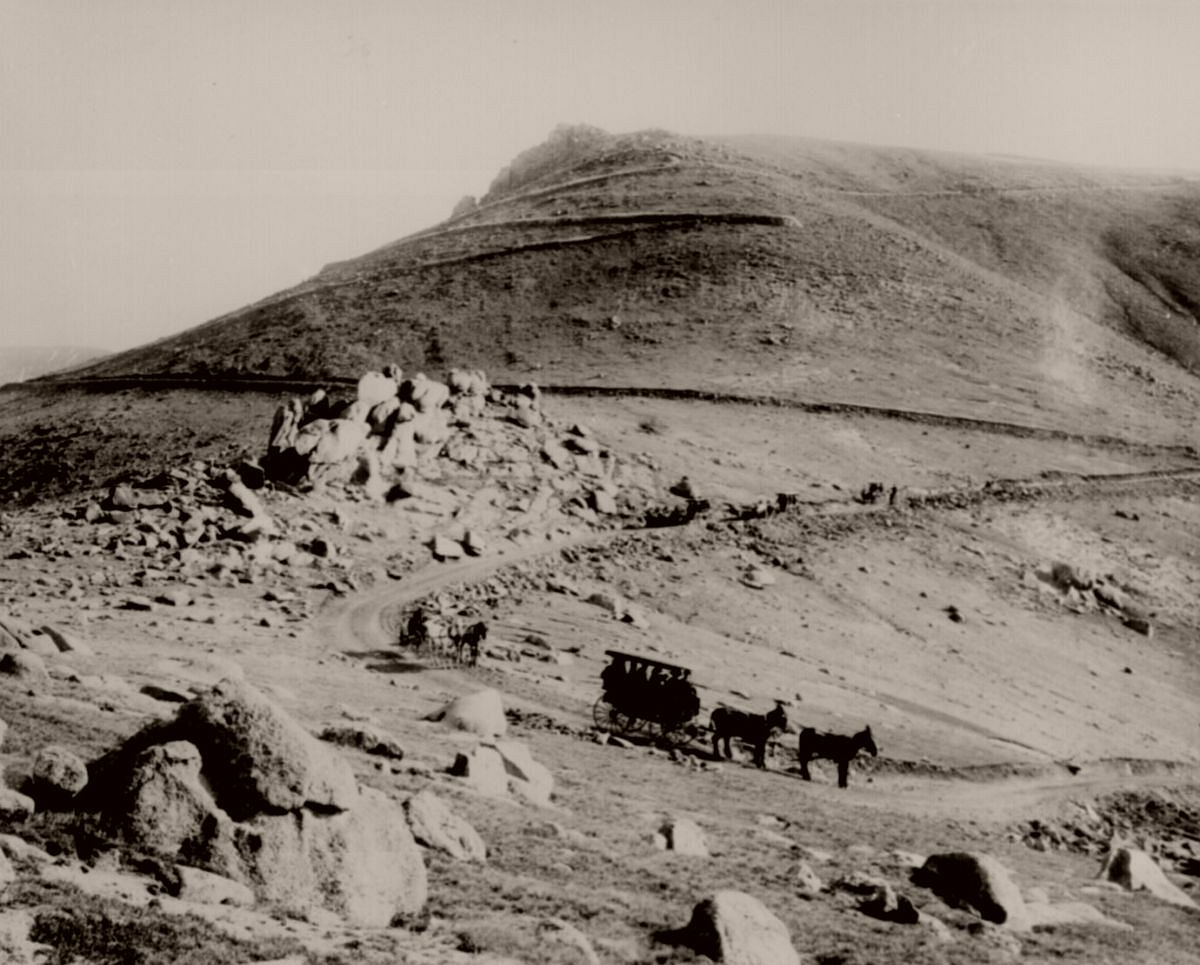 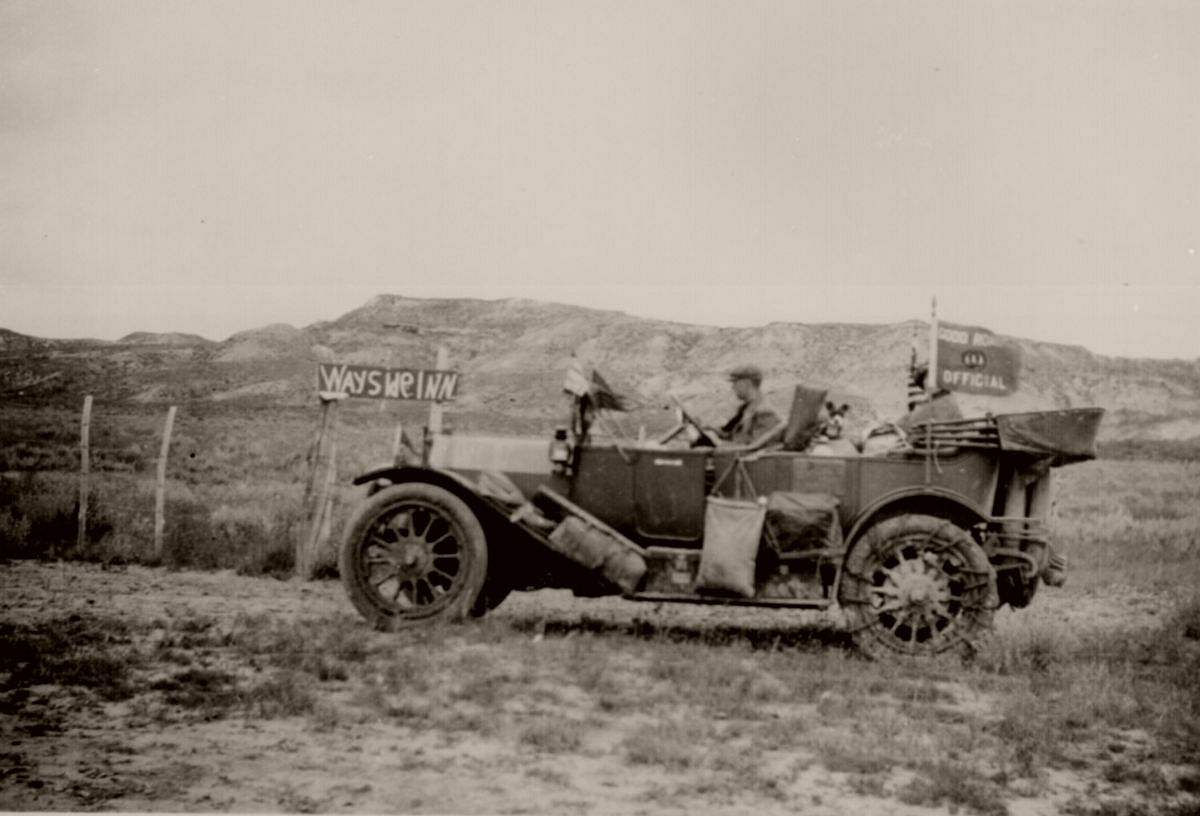 An AAA Good Roads Official on his transcontinental auto trip passes the only road sign in evidence along the dusty, desolate road near Glendive, Mont. July 1912. 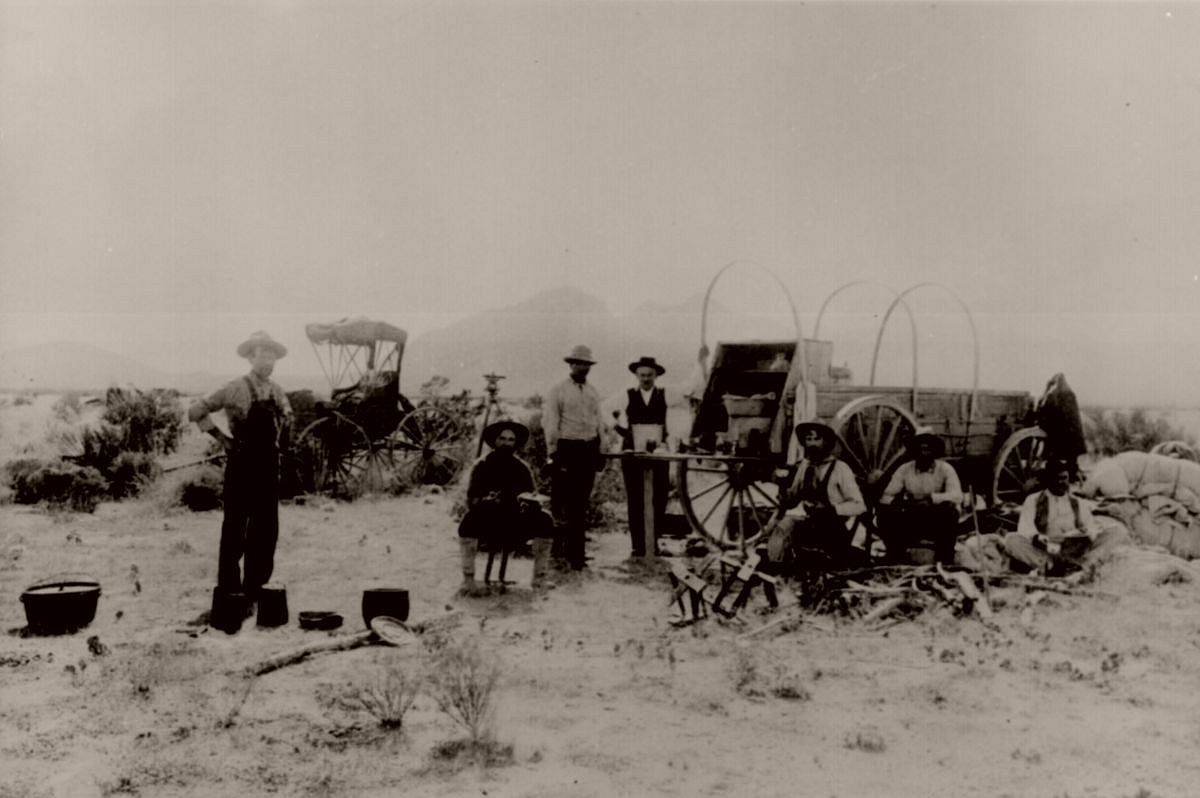 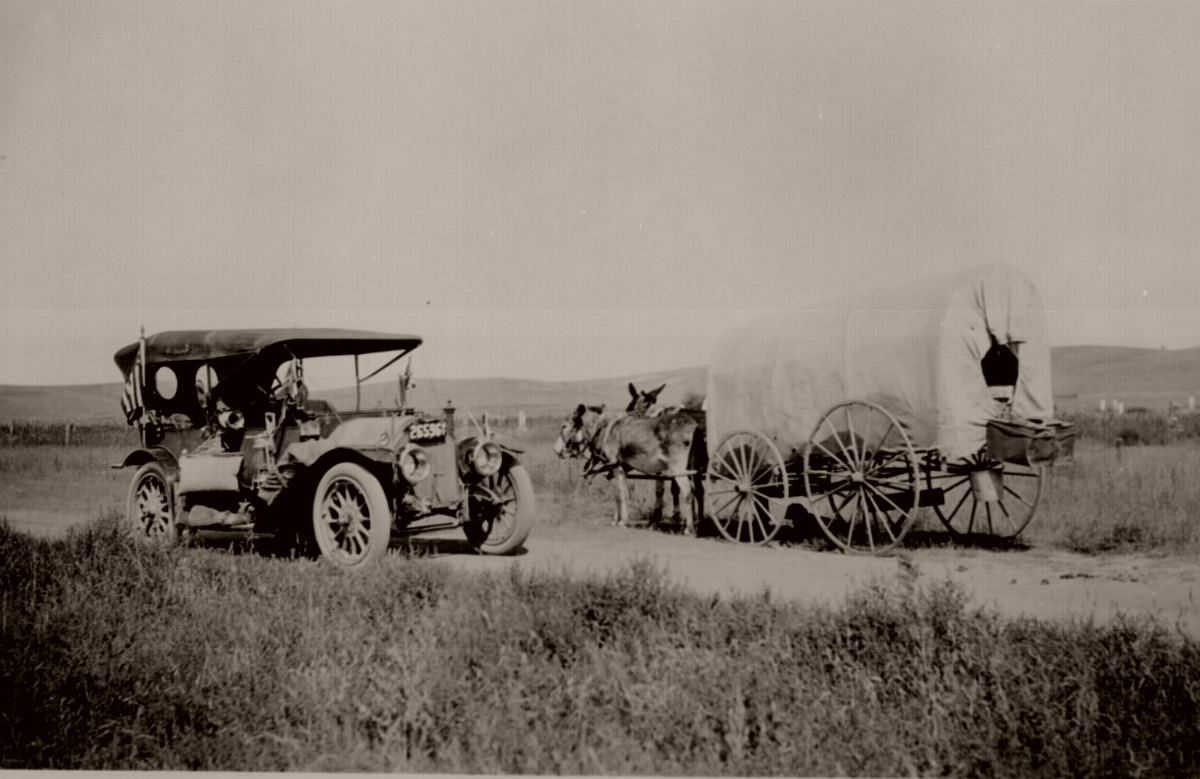 Covered wagon with jackrabbit mules encounters an automobile on the trail near Big Springs, Nebr., 1912. 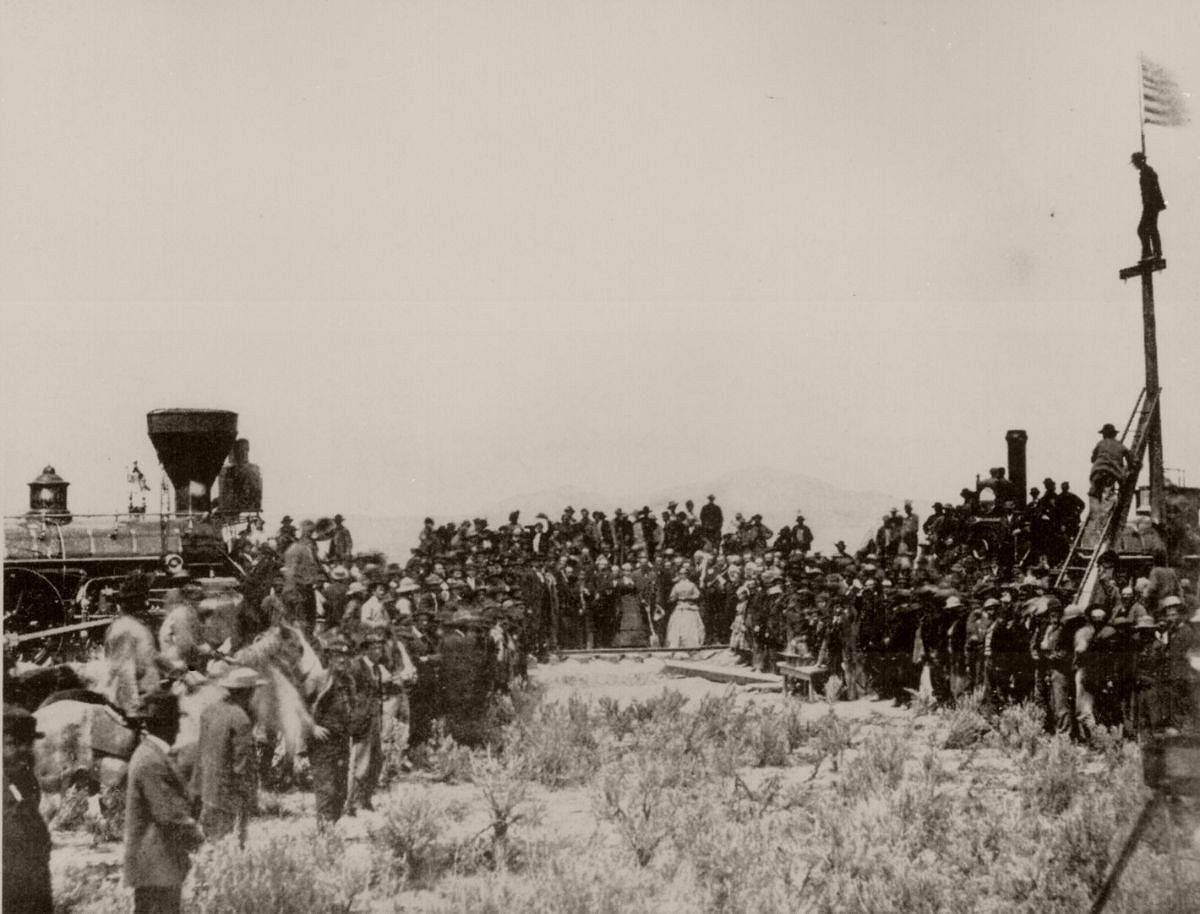 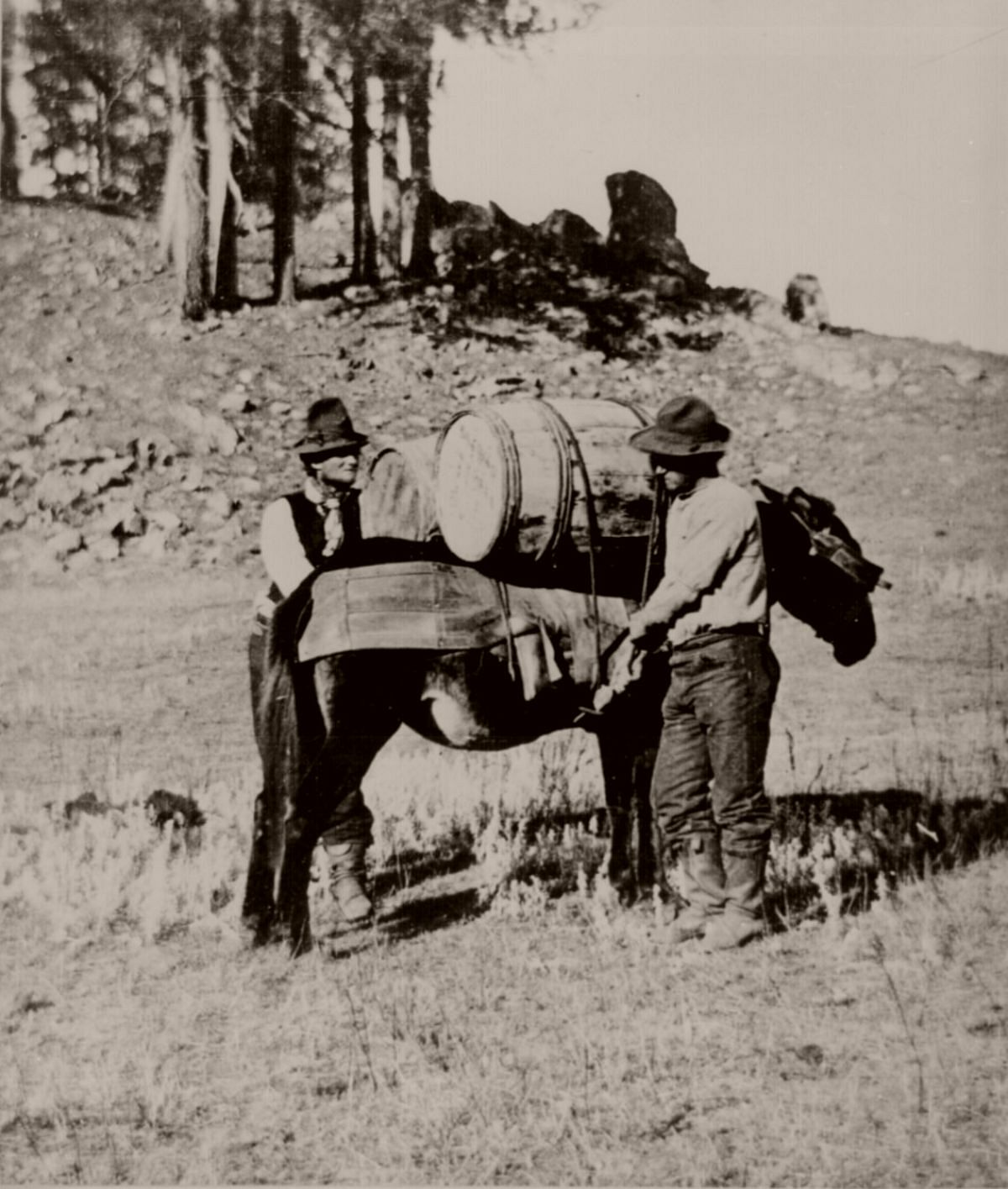 Cinching and loading pack mule with flour during starvation march of Gen. George Crook’s expedition into the Black Hills, 1876. 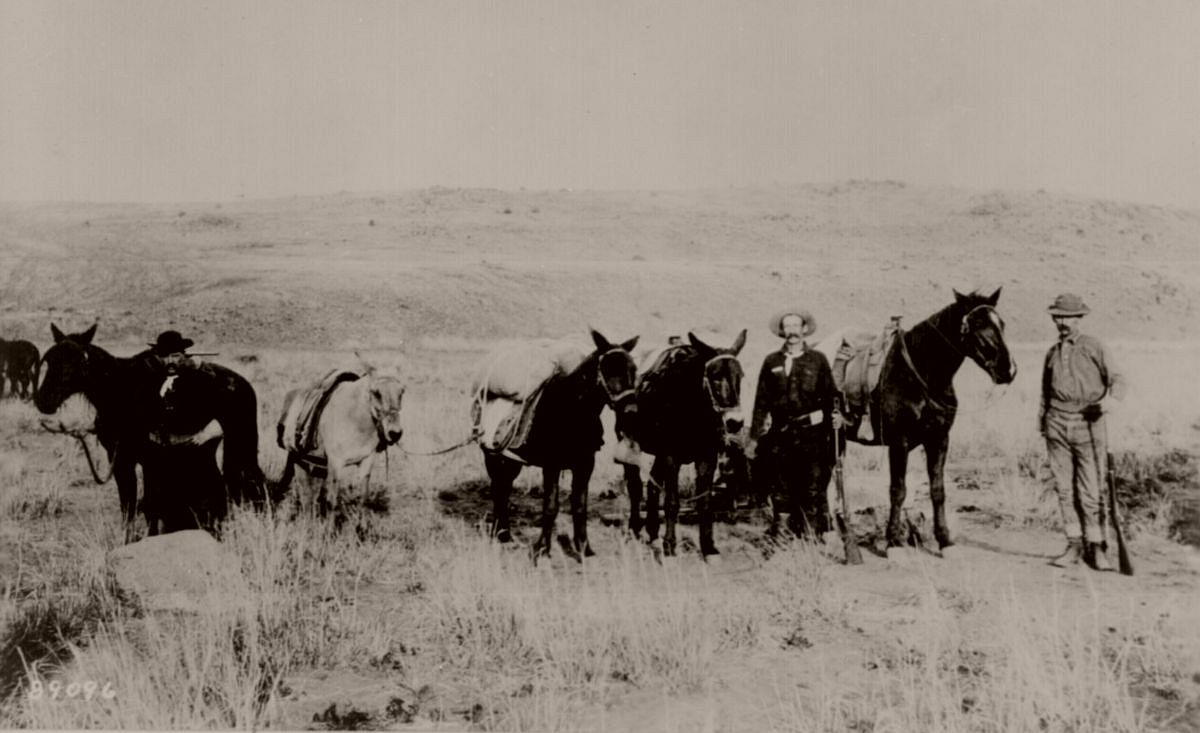