Collection of vintage black and white photos of photographers with their cameras. From Beverly’s Flickr collection. 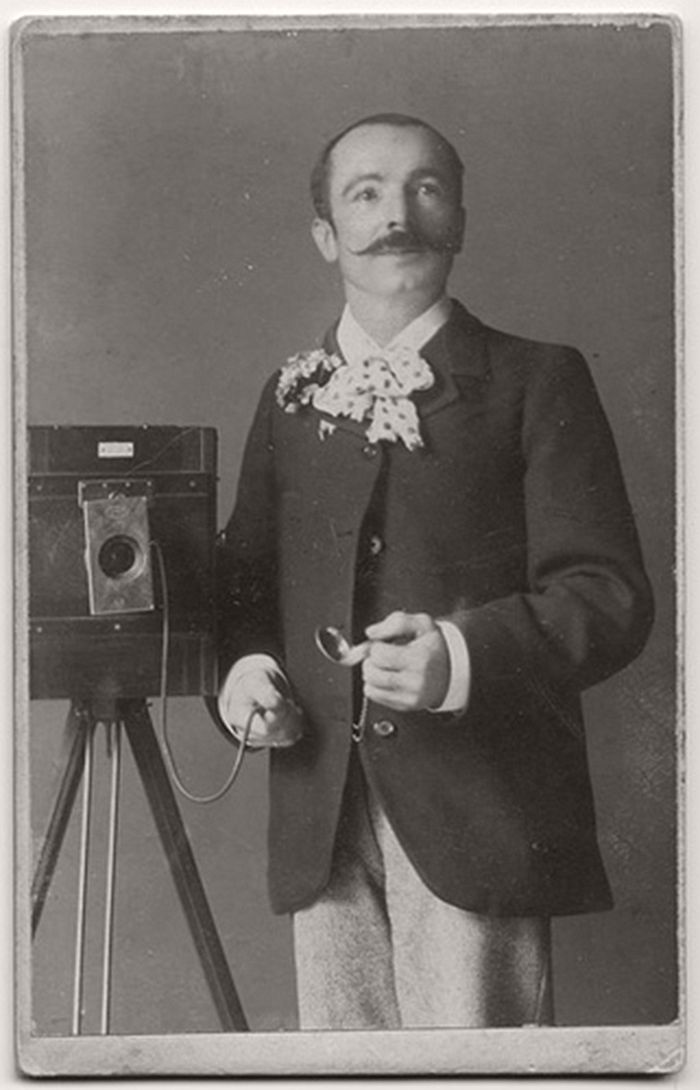 This gentleman has passed dapper and is approaching a lampoon representation of an artiste! The floppy polka dot bow tie and bunch of flowers might be his everyday dress but it feels to us as if he is having some fun or playing a part. He holds the bulb of a pneumatic shutter mounted on a large view camera. His pocket watch is in hand to time the exposure. 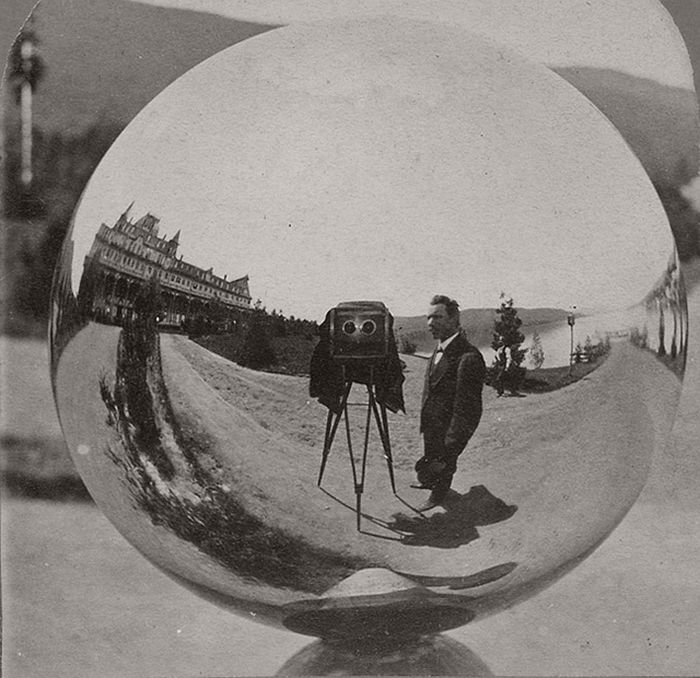 This image is half a stereo card by G.S. Irish of Glen’s Falls, N.Y. The Fort William Henry Hotel, Lake George, N.Y.; the photographer; and his stereo camera are reflected in a mirrored gazing ball. 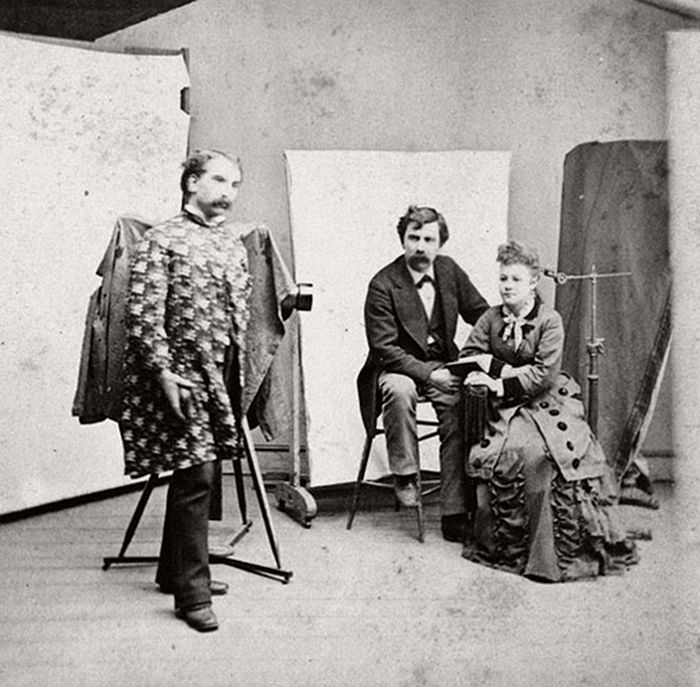 This is half of a stereo card that is marked “E. M. Johnson, Photographer, Crown Point, N.Y.”. Mr. Johnson wears a rather bazarre printed coat while he photographs a couple. 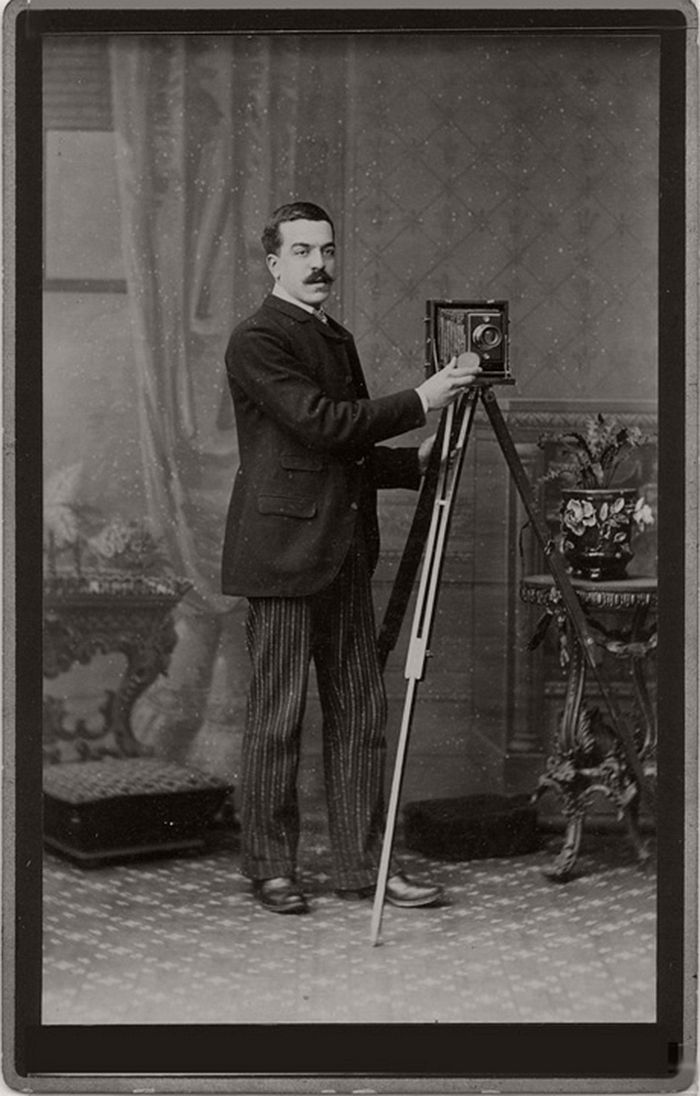 This cabinet card shows a mustached man with a folding camera in a studio setting. 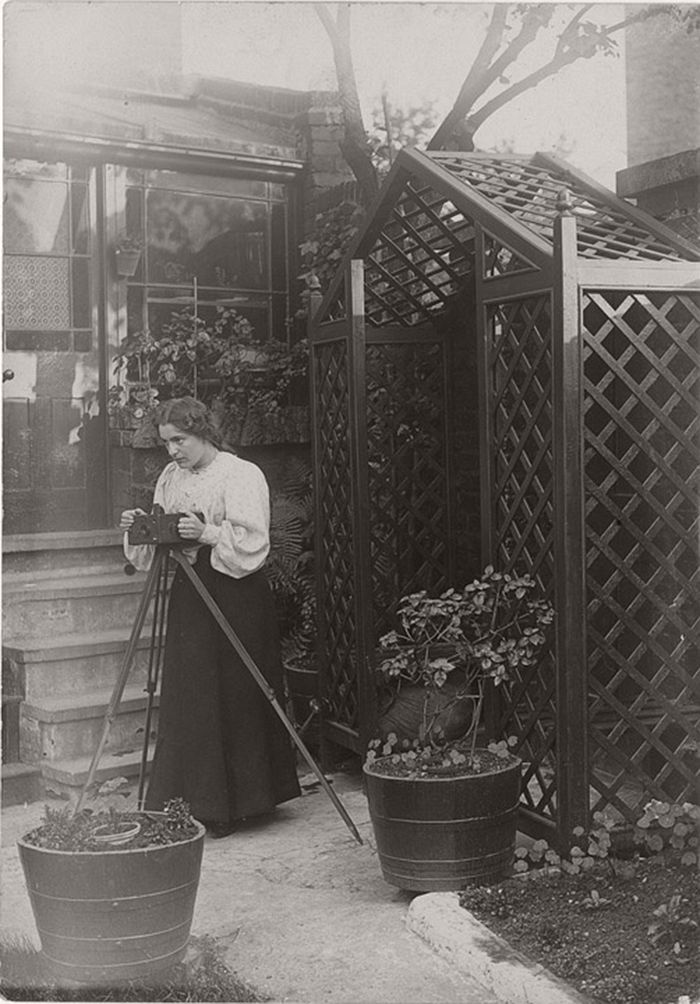 Young woman is standing behind a camera on a tripod in a back garden. 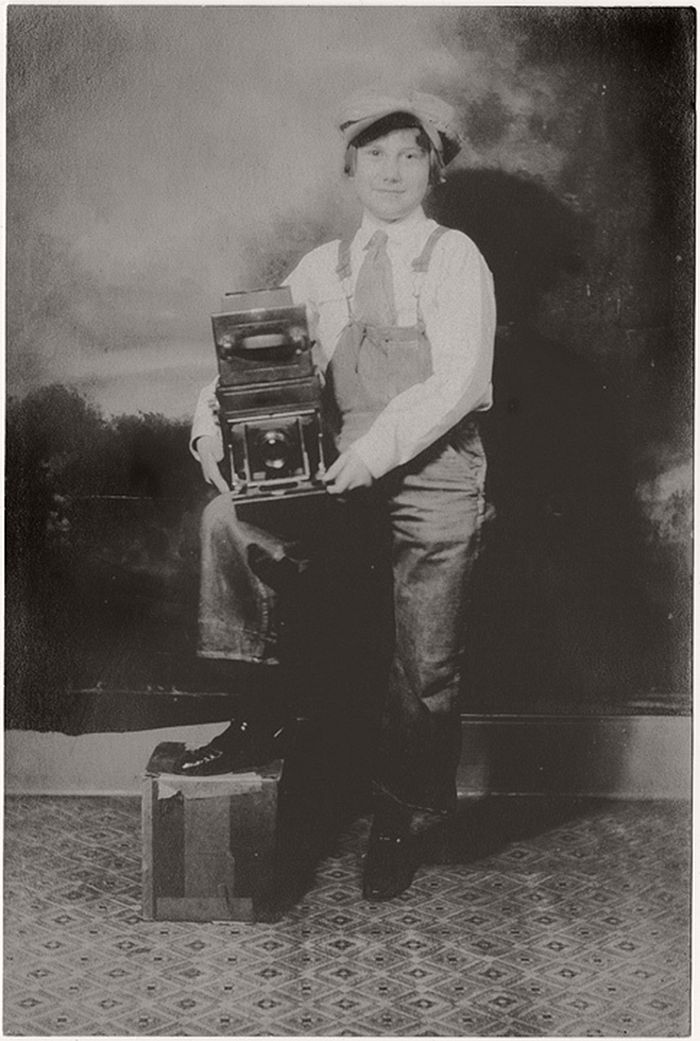 The print shows some free silver in the shadows but the appeal of the young person, a boy we thought, proudly showing off a Graflex type camera was immediate. 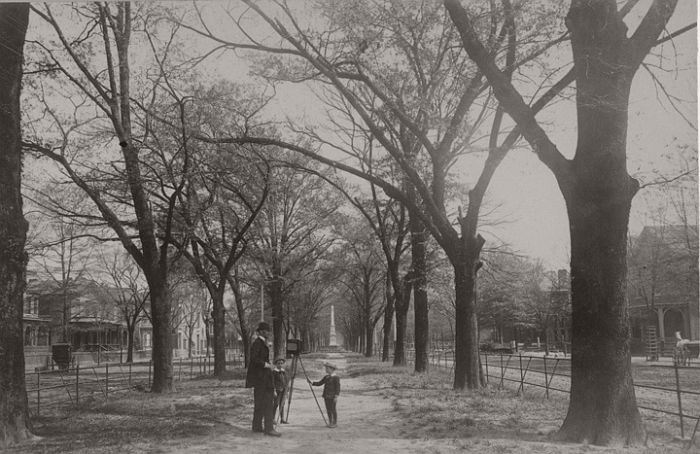 Photographer with view camera in the median of Green Street in Augusta, Georgia.The camera on a tripod is from the dry plate era, late 19th or early 20th century. Two young boys stand with the photographer in a derby in the median of a wide city boulevard lined with large residences. On the right is a carriage with a mounting block and on the left a carriage with a horse. There is a monument in the distance and there appear to be electric light strung across the median. 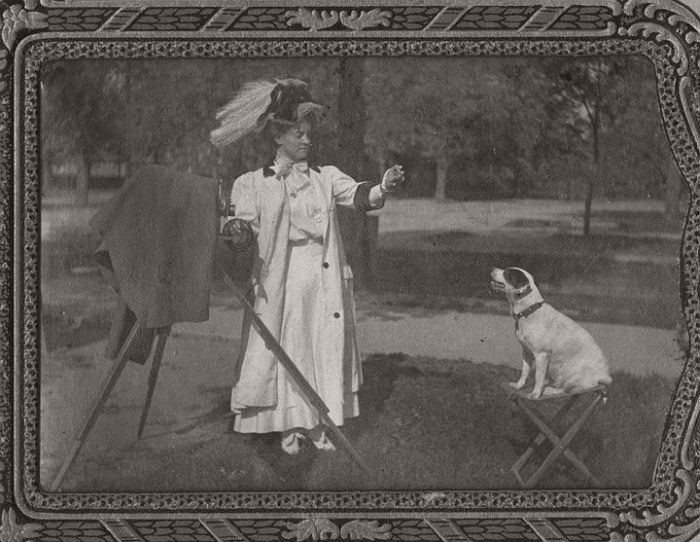 Lady photographing a dog with a view camera 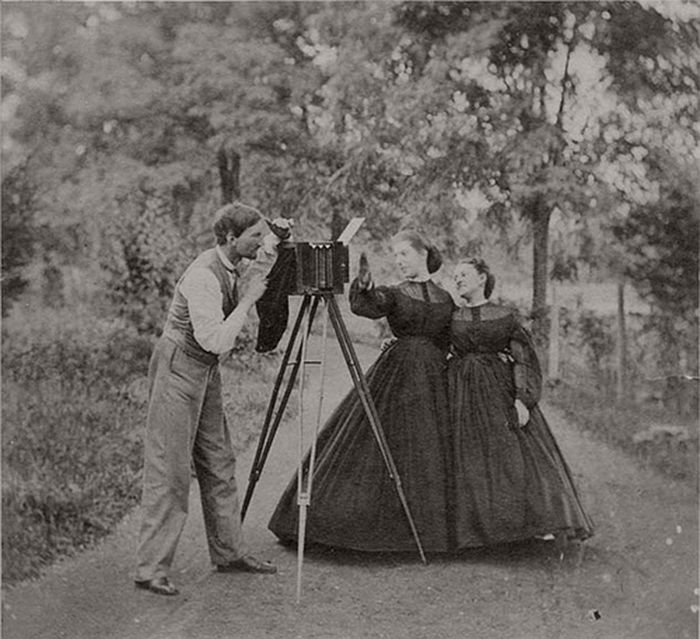 Two women in hoop skirts tease a photographer in this albumen print taken from an album of Mount Savage, Maryland photographs. The dresses suggest the 1850s/60s. 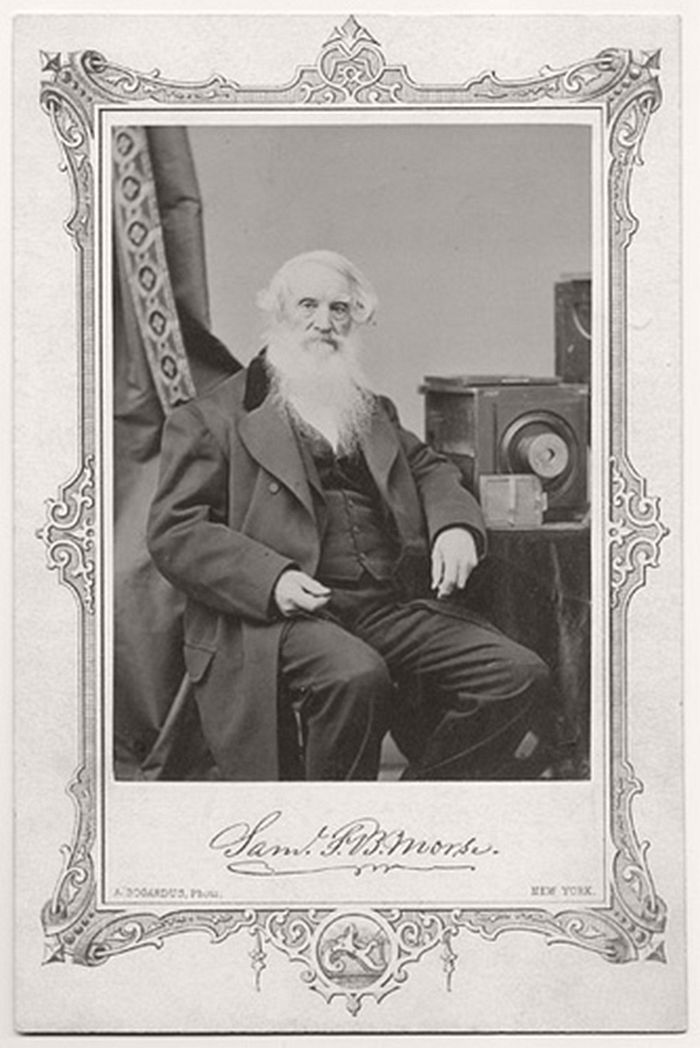 Samuel F. B. Morse with his camera. The albumen photograph by A. Bogardus of New York shows an older Morse with his daguerreotype camera beside him on a table. In addition to his accomplishments as a painter and inventor of the telegraph Morse was a very early practitioner of the daguerreotype process. He was given a demonstration by Daguerre himself in 1839 before the public presentation. Morse taught the process to a succession of eager American photographers, including Mathew Brady.