Some of the most beautiful women in England (and many from Europe and the USA) trod the boards of the many theatres to be found in London’s West End in those halcyon days. Women like Gabrielle Ray, Lily Elsie, Pauline Chase, the sisters Dare, and of course my own particular favourites Gertie Millar and Ellaline Terriss.

Many of these actresses started from humble beginnings but were determined to make the most of their lives. Many would have long and successful stage careers. A few would become even more famous in celluloid than they ever had been on stage. Some would marry successful husbands, even into the nobility. And one, Mabel Russell, even became an MP – not particularly suprising today perhaps, but when she was at the height of her stage career women were not yet even allowed the vote!

Arlette Dorgère (born Anna Mathilde Irma Jouve; 1880 – 1965) was a French actress, dancer and singer. She was represented on a large number of postcards of the Belle Époque and also a model for posters. 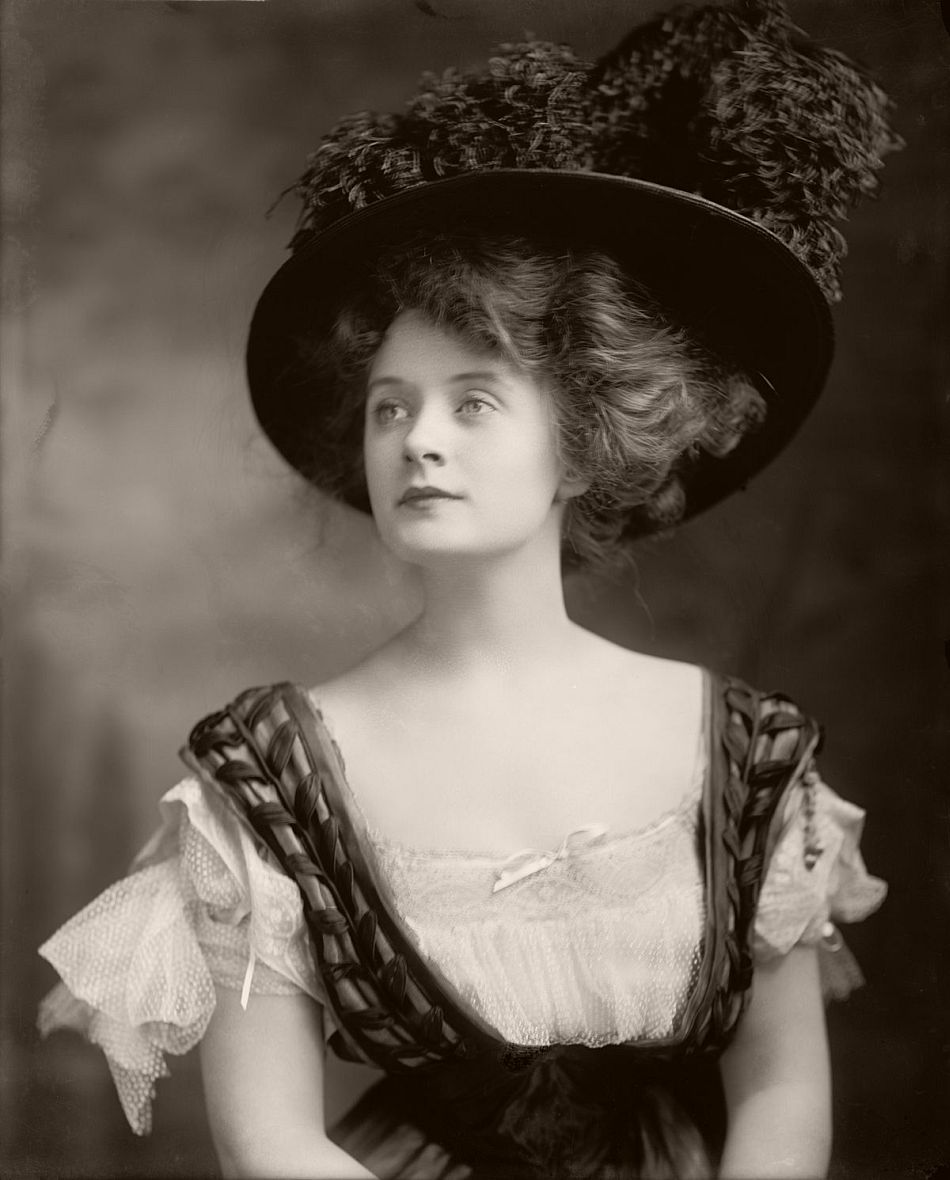 Mary William Ethelbert Appleton “Billie” Burke (1884 – 1970) was an American actress, famous on Broadway and in early silent film. Her voice was unique in intonation, which she accentuated in her later character roles as dim-witted, spoiled society types. 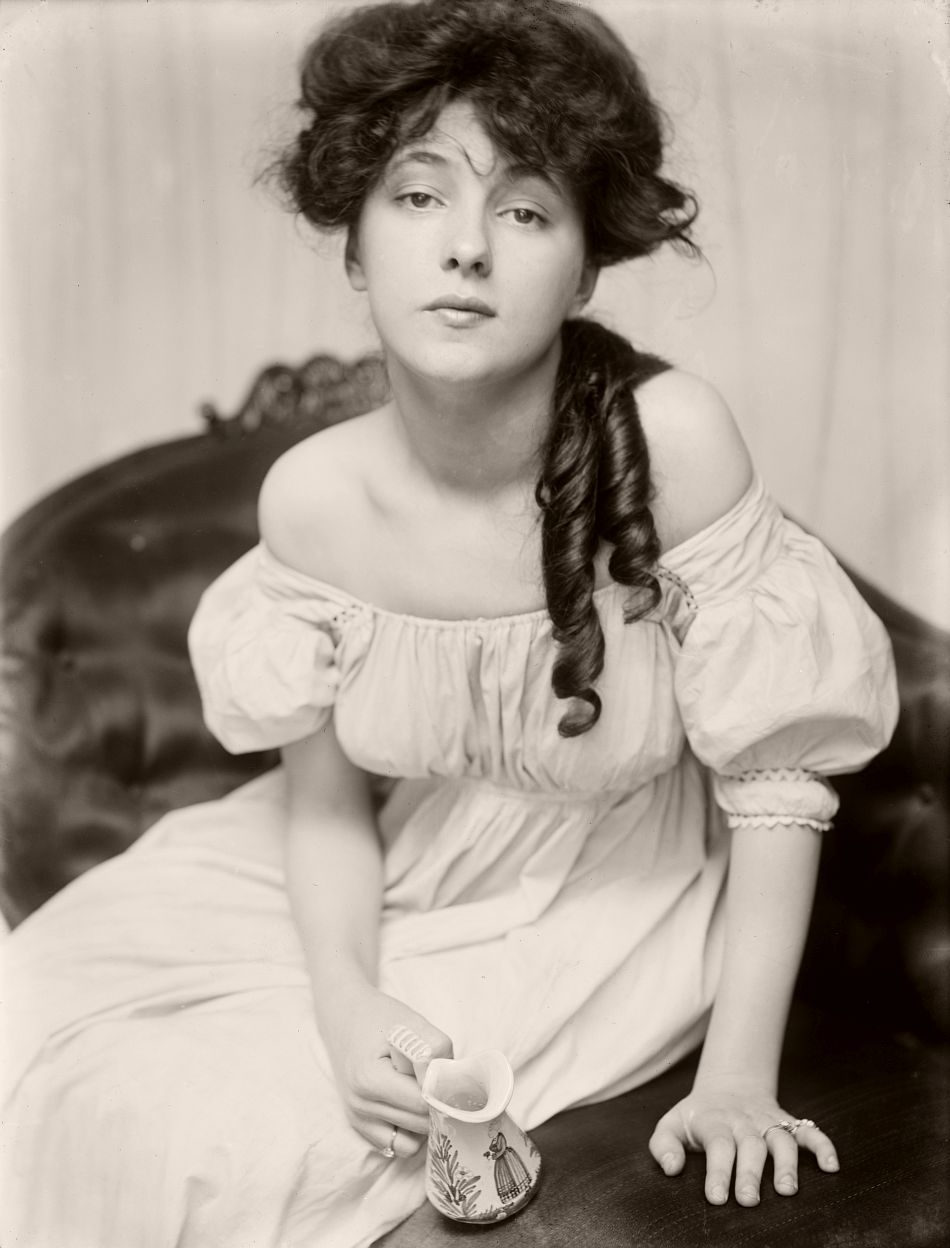 Florence Evelyn Nesbit (December 25, 1884 – January 17, 1967), known professionally as Evelyn Nesbit, was a popular American chorus girl, an artists’ model, and an actress. In the early part of the 20th century, the figure and face of Evelyn Nesbit were everywhere, appearing in mass circulation newspaper and magazine advertisements, on souvenir items and calendars, making her a cultural celebrity. Her career began in her early teens in Philadelphia and continued in New York, where she posed for a cadre of respected artists of the era, James Carroll Beckwith, Frederick S. Church, and notably Charles Dana Gibson, who idealized her as a “Gibson Girl”. She had the distinction of being an early “live model”, in an era when fashion photography as an advertising medium was just beginning its ascendancy. 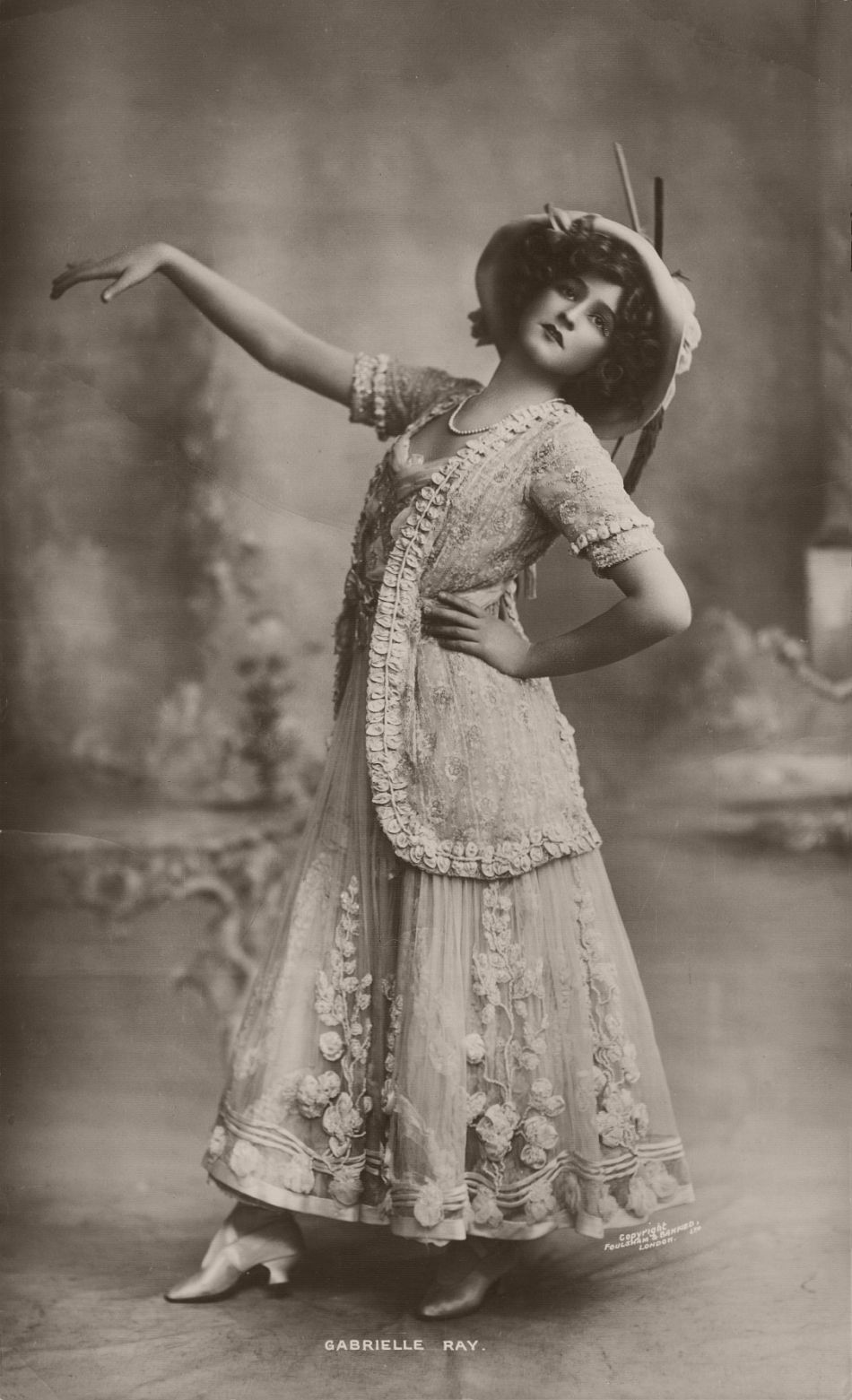 Gabrielle Ray (1883 – 1973), was an English stage actress, dancer and singer, best known for her roles in Edwardian musical comedies. Ray was considered one of the most beautiful actresses on the London stage and became one of the most photographed women in the world. In the first decade of the 20th century, she had a good career in musical theatre. After an unsuccessful marriage, however, she never recovered the fame that she had enjoyed. She spent many of her later years in mental hospitals.

Geneviève “Ginette” Lantelme (born Mathilde Hortense Claire Fossey, 1883) was a French stage actress, socialite, fashion icon, and courtesan. Considered by her contemporaries to be one of the most beautiful women of the Belle Epoque and bearing a resemblance to American actress Ethel Barrymore, she is remembered for the mysterious circumstances of her death: on the night of July 24/25, 1911, she fell from the yacht of her husband, Alfred Edwards. 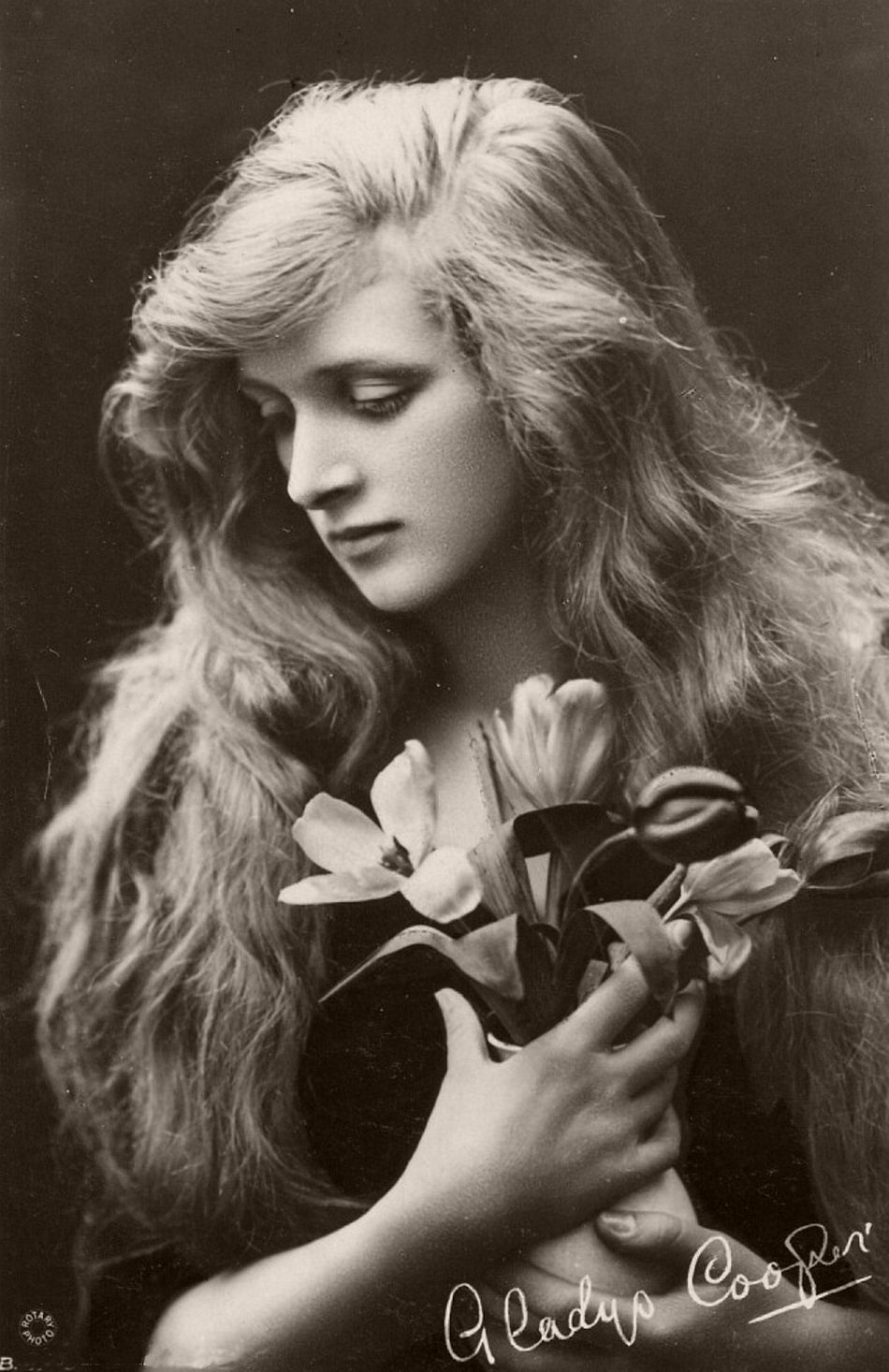 Dame Gladys Constance Cooper, DBE (1888 – 1971) was an English actress whose career spanned seven decades on stage, in films and on television. Beginning on the stage as a teenager in Edwardian musical comedy and pantomime, she was starring in dramatic roles and silent films before the beginning of the First World War. 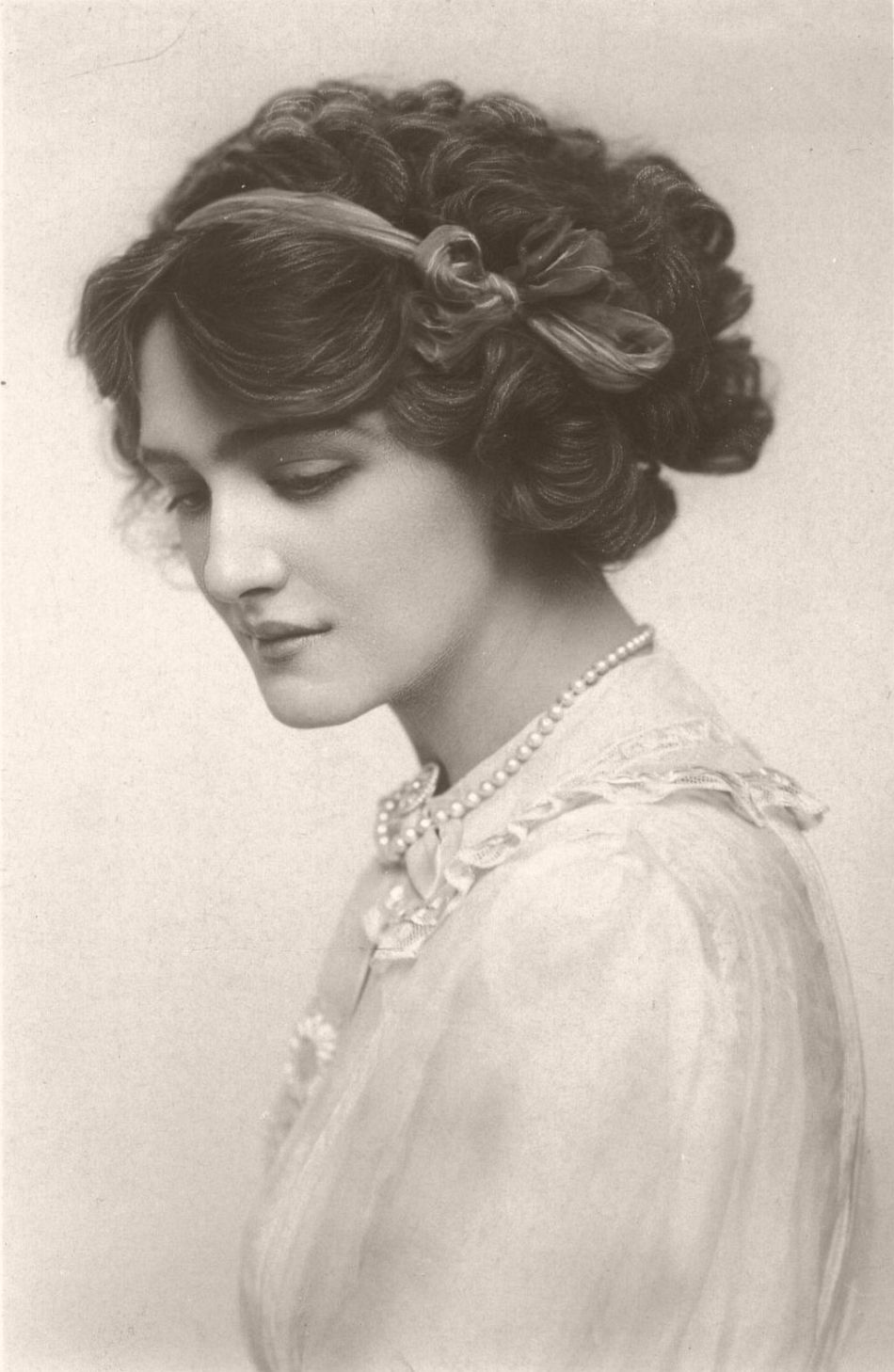 Lily Elsie (born Elsie Hodder; 1886 – 1962) was a popular English actress and singer during the Edwardian era. Beginning as a child star in the 1890s, Elsie built her reputation in several successful Edwardian musical comedies before her great success in The Merry Widow, opening in 1907. Afterwards, she starred in several more successful operettas and musicals. Admired for her beauty and charm on stage, Elsie became one of the most photographed women of Edwardian times. 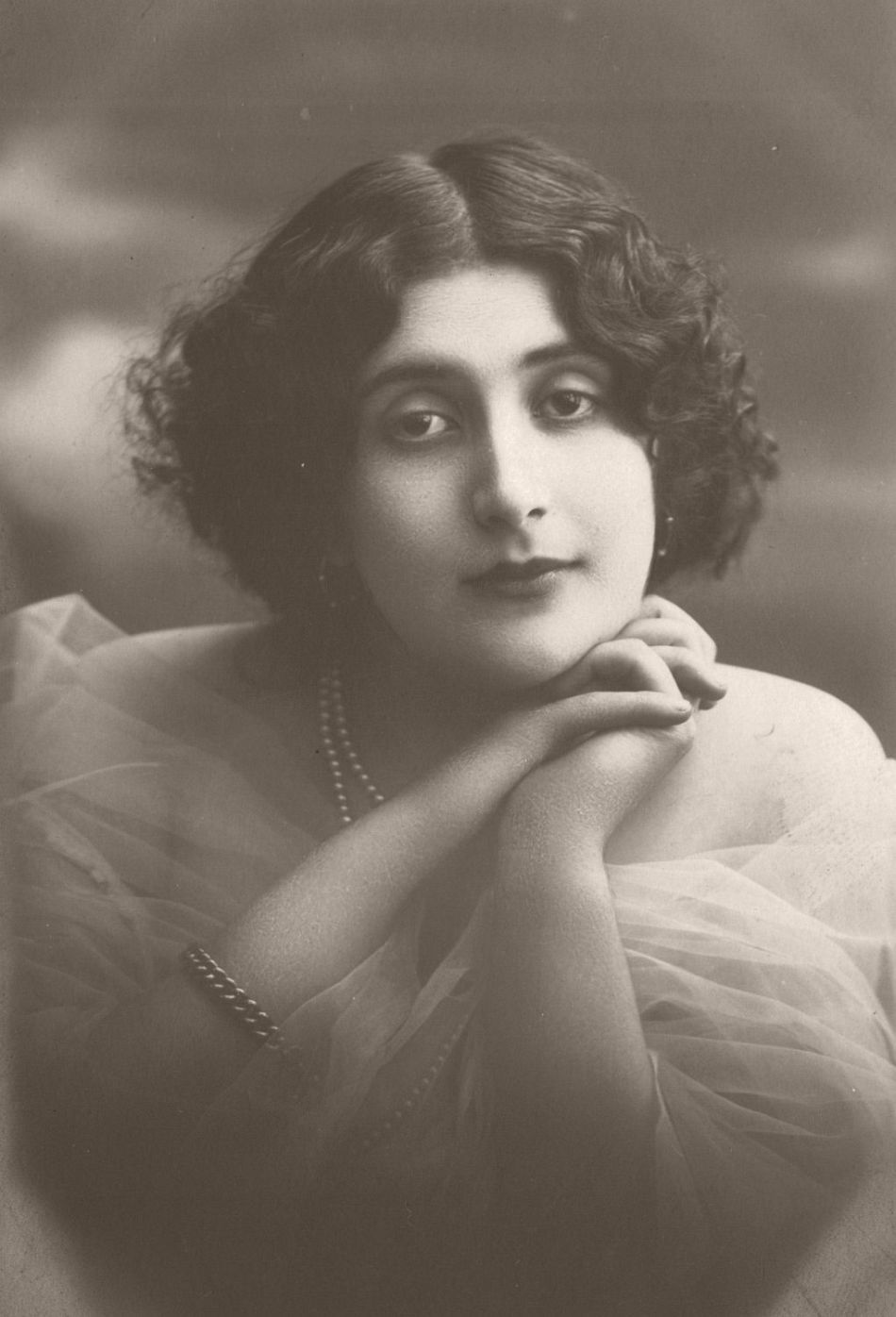 Lina Cavalieri (1875 – 1944) was born near Rome, orphaned at 15, her voice and beauty quickly made her an opera star. Retiring from the stage in 1914, she opened a beauty salon in Paris, and became a film actor in Italy until WWI when she moved to the USA to make more films. 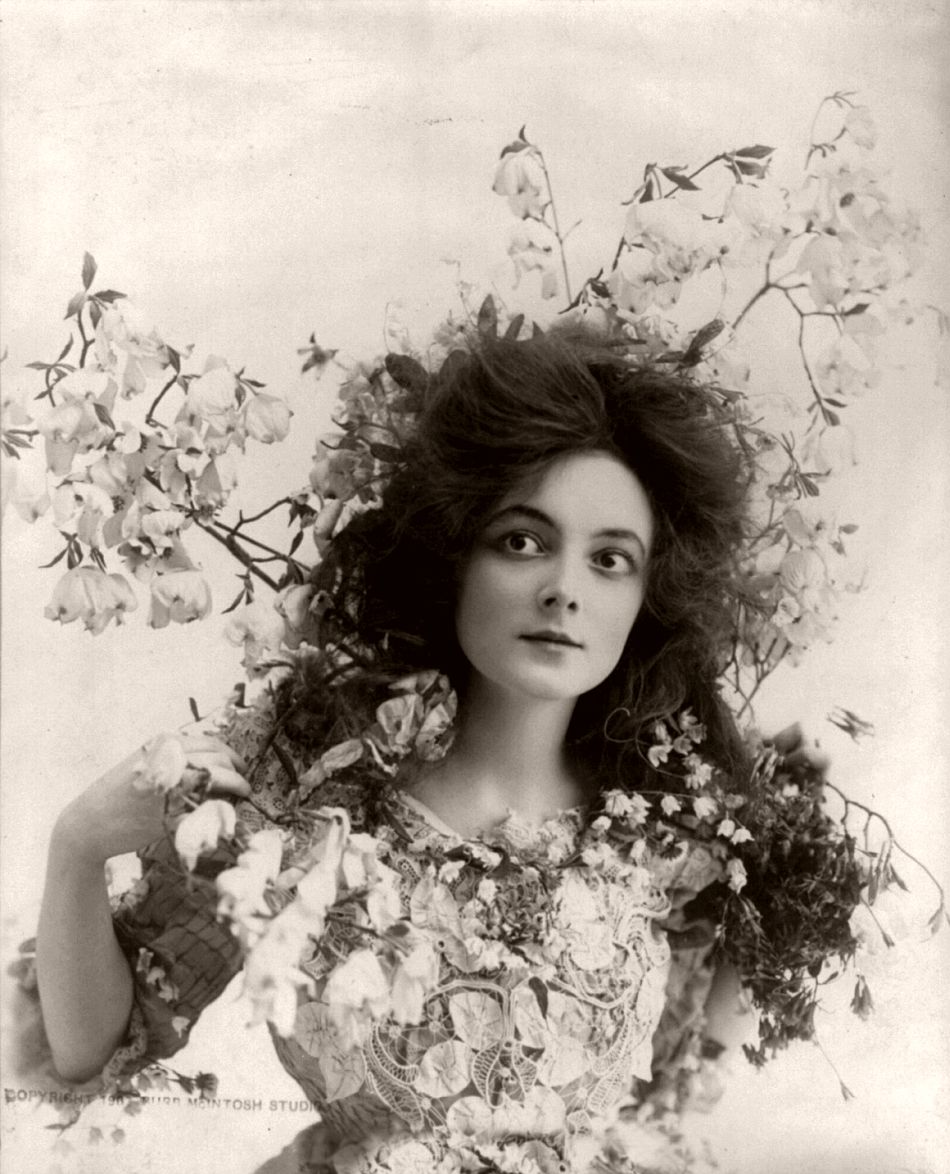 Marie Doro (1882 – 1956) was an American stage and film actress of the early silent film era. She was first noticed as a chorus-girl by impresario Charles Frohman, who took her to Broadway, where she also worked for William Gillette of Sherlock Holmes fame, her early career being largely moulded by these two much-older mentors. Although generally typecast in lightweight feminine roles, she was in fact notably intelligent, cultivated and witty. 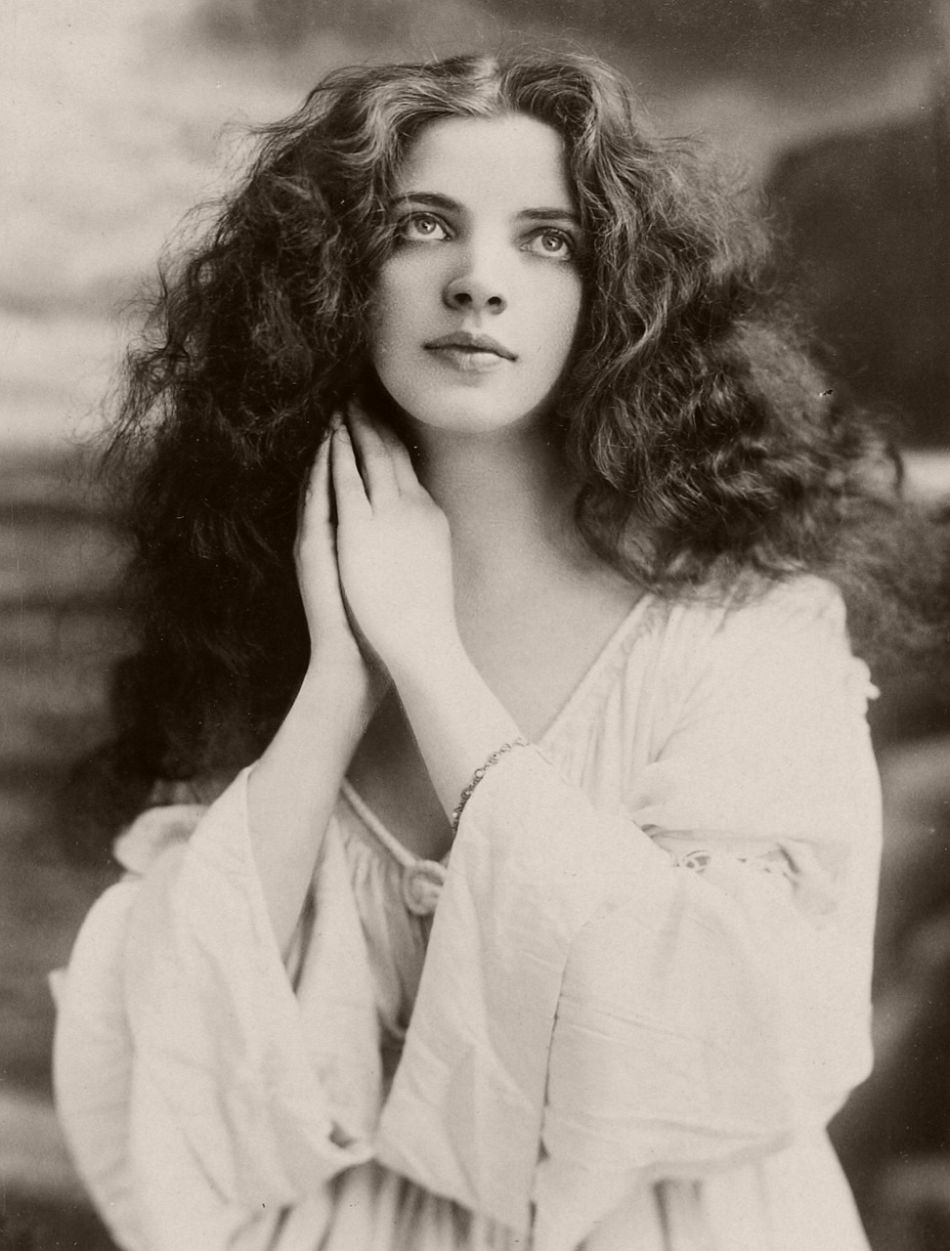 Maud Allan (27 August 1873 – 7 October 1956) was a Canadian pianist-turned-actress, dancer and choreographer who is remembered for her “impressionistic mood settings”.