Created from the Chicago Tribune’s vast archives, Gangsters & Grifters is a collection of photographs featuring infamous criminals, small-time bandits, smirking crooks, pickpockets, hoodlums, and wise guys at shocking crime scenes. These vintage glass-plate and acetate negatives were taken in the early 1900s through the 1950s, and have been largely unseen for generations. That is because most have never been published, only having been witnessed by the photographers and police in the mere moments after an arrest, crime, or even murder.

Included are graphic crime scenes, raw evidence, and depictions of searing emotions, captured on film during a time when photographers were given unprecedented access to work alongside police. Some photographs resemble film noir movie stills. Some are cartoonish. But all feature real people, real drama, and real crimes. Accompanying information about each figure has been included wherever possible, often with archived news stories concerning the individual in question.

Gangsters & Grifters is a powerful, visually stunning look back into the dark story of Chicago’s nefarious crime underworld. Readers will be fascinated, surprised, and entranced by the still-unsolved murder mysteries and portraits of notorious gang overlords like John Dillinger and Al Capone. A must-have for photography buffs, history lovers, and anyone curious about the seedy underbelly of early-20th century Chicago.

Gangsters & Grifters
By the Chicago Tribune Staff
224 Pages, Black and white photos throughout 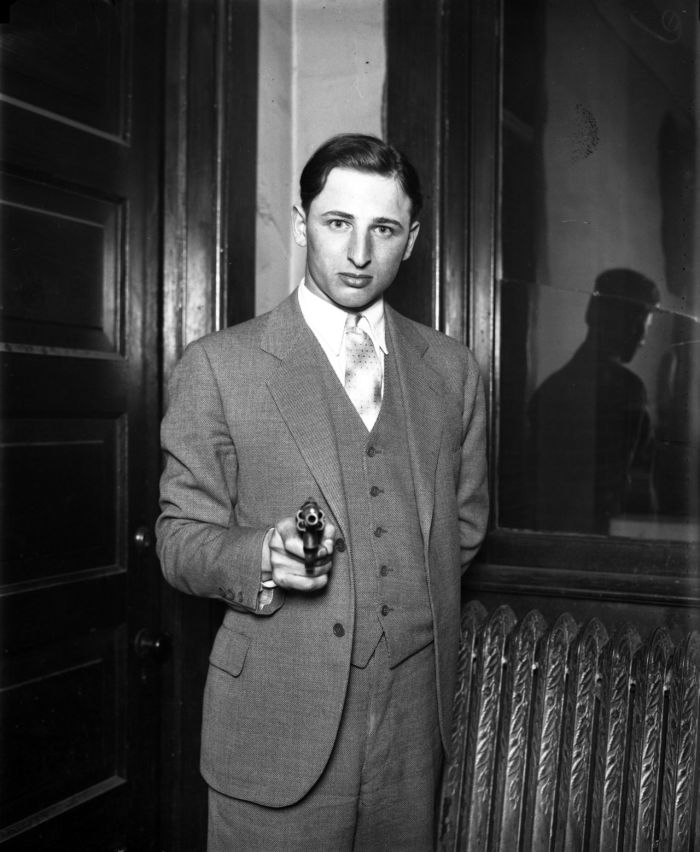 On April 28, 1929, policeman Sidney Block of the South Chicago district, off duty and in plain clothes, shot and killed a well-dressed young gunman who’d held up two 63rd Street shops. According to the Tribune, Block yelled “Halt there, I’m a policeman” as he drew his gun. “Go to hell,” cried the robber over his shoulder as Block pumped three bullets into the thief, which stopped him dead. — Chicago Tribune historical photo 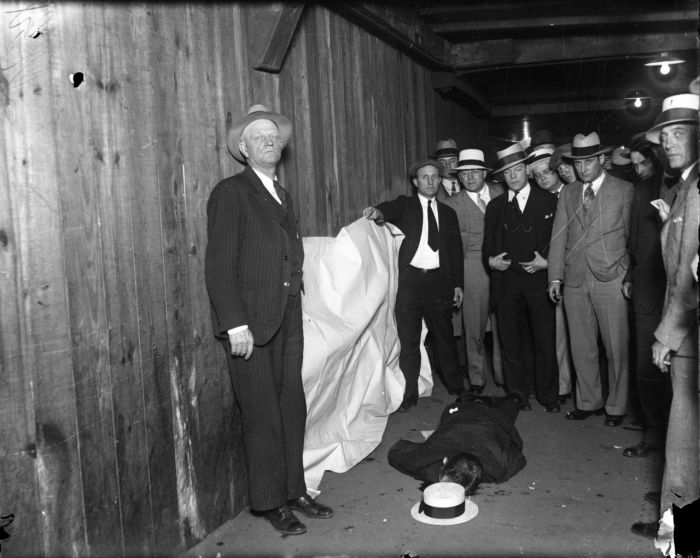 The scene in the tunnel under Michigan Avenue leading to the Illinois Central train station at Randolph Street shortly after Alfred “Jake” Lingle, 38, an 18-year veteran Chicago Tribune crime reporter, was shot and killed by a single gunshot to the head on June 9, 1930. Lingle had been covering Chicago’s crime underworld for years and had come to know many local gang leaders. Reports suggested that Lingle was not killed to prevent the exposure of gang activity, as many asserted, but that he was actually involved in the crime underworld. The Tribune reported that Lingle wore a diamond-studded belt buckle given to him by his friend Al Capone. — Chicago Tribune historical photo 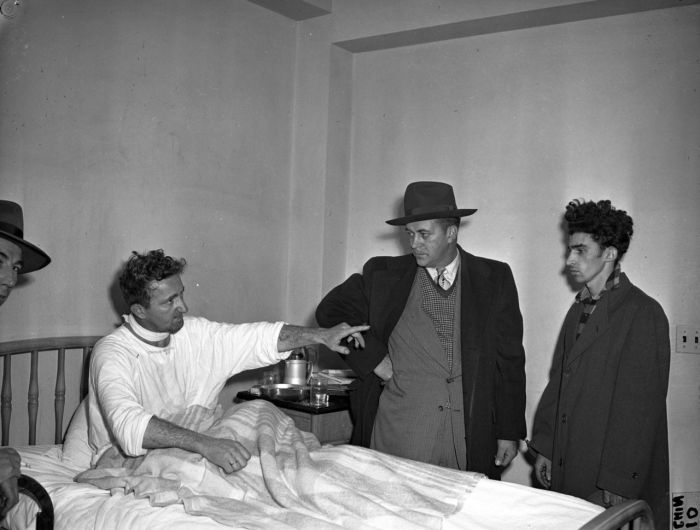 An injured Nick Kuesis points to his brother’s killer and the man who shot him in the neck, James Morelli, 20, right, circa December 1947. “That’s the dirty bastard that killed my brother,” said Kuesis. At left is Detective Emil Smicklas, and second from right is Detective Charles Malek. — Chicago Tribune historical photo 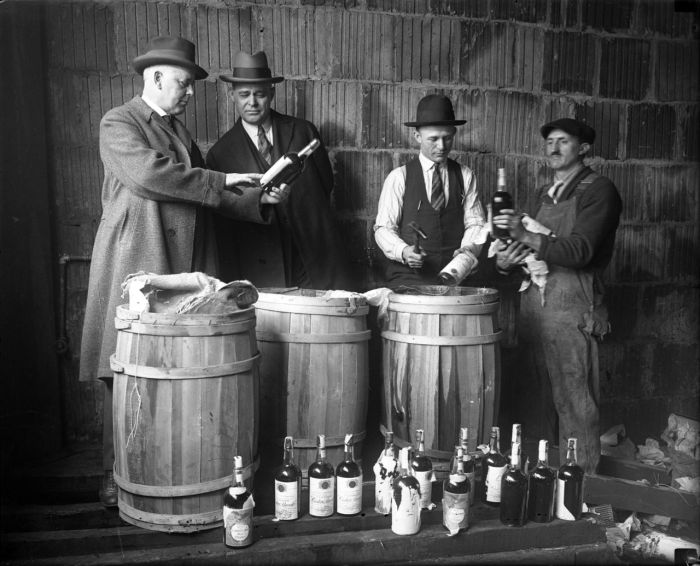 Buy this photo From left, Capt. A.C. Townsend, U.S. Marshal Palmer Anderson, Deputy U.S. Marshal A.J. Jostock and a laborer look over confiscated liquor at a federal warehouse, circa April 1925. The men were ordered to clear out the warehouse for seized liquor to make room for Army purposes. — Chicago Tribune historical photo 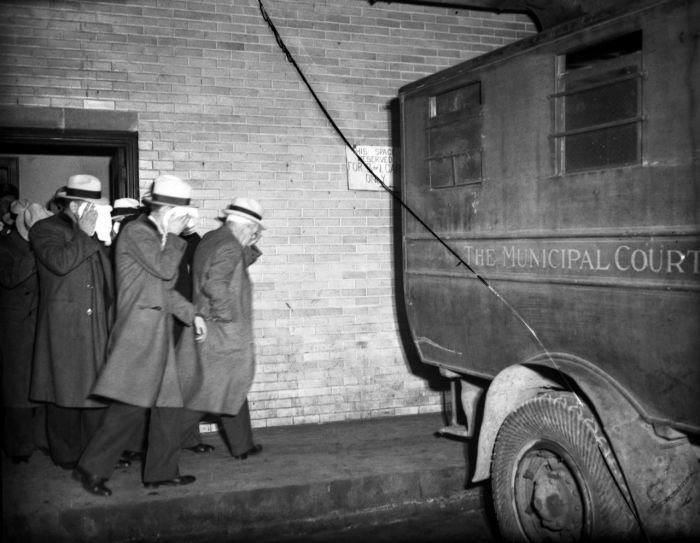 Police shuttle suspected hoodlums from the detective bureau to a patrol wagon and eventually on to the Criminal Court Building, circa November 1932. The detective bureau raided several establishments on Nov. 2 and 3, 1932, rounding up lawbreakers. They managed to roust 12 of Chicago’s most impressive gangsters, including the big boss “Three Fingered Jack” White, and several men who were said to work for Al Capone. — Chicago Tribune historical photo 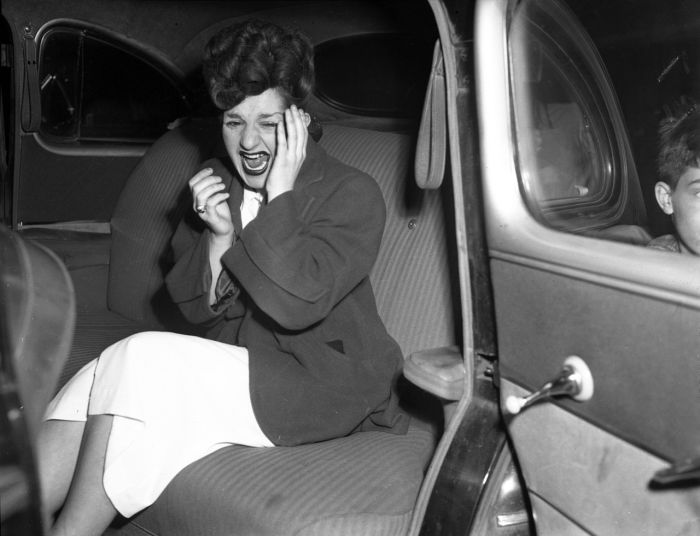 Agnes Stathatos cries after identifying her brother George Stathatos’ body. The victim was found in his car with two bullets in his head, his hands and feet tied together and his mouth taped shut in the 600 block of N. Troy Street on May 22, 1948. Stathatos, a former tavern owner and known gambler, had not worked for three years but, according to the Tribune, he “always had money.” It was suspected that Stathatos and several gang members specialized in robbing syndicate handbooks and were tortured and killed in retaliation. — Chicago Tribune historical photo 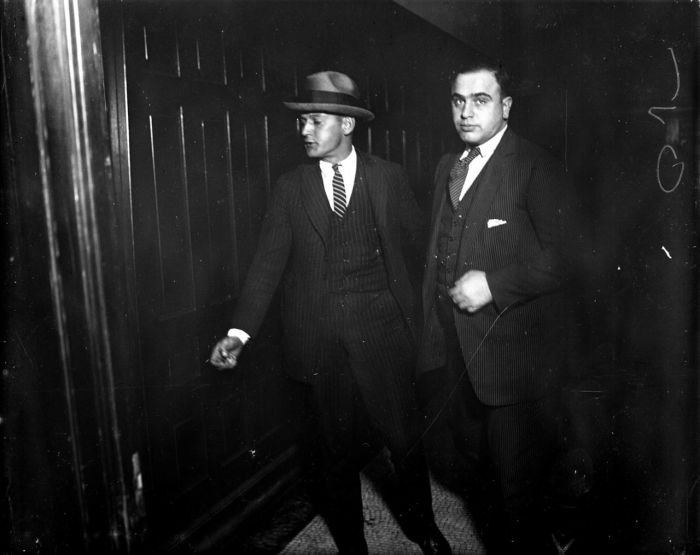 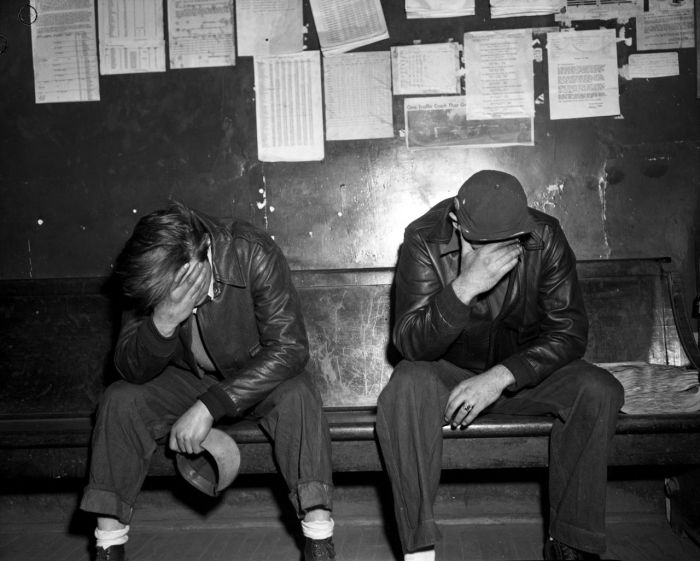 Charles E. Snyder, 25, and Harold Cole, 24, were arrested on Jan. 16, 1950, for robbing the home of Henry Sonnenschein (in the 2400 block of South Ridgeway Avenue) on April 9, 1946. The burglars said they stole $39,000, but Sonnenschein, who didn’t report the crime for four years, said they stole only $7,300. Snyder and Cole were freed shortly after their arrest because too much time had passed without a police report being filed. Sonnenschein, who was a court clerk and the 22nd Ward Democratic committeeman, said that most of the money belonged to the Democratic Ward Organization. — Chicago Tribune historical photo 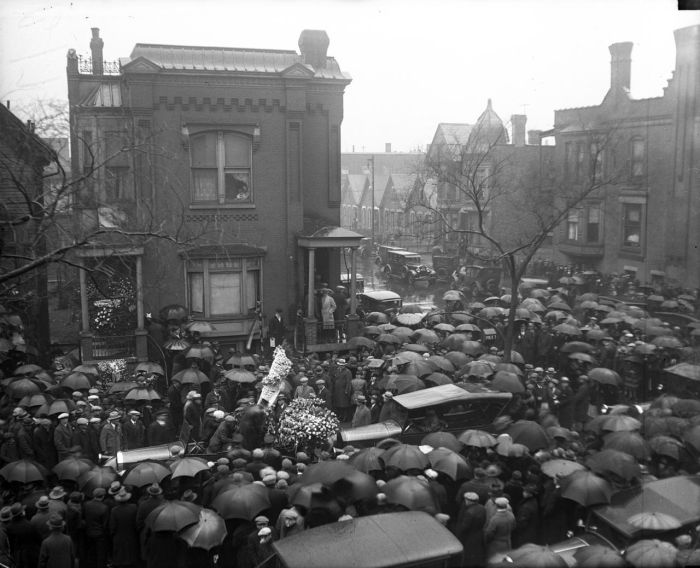 A large crowd gathers outside the funeral for Joseph “Diamond Joe” Esposito, the beloved Republican boss of the 19th Ward, who was involved in bootlegging, extortion, prostitution and labor racketeering. He was was shot 58 times from two double-barreled shotguns and a revolver in 1928. — Chicago Tribune historical photo 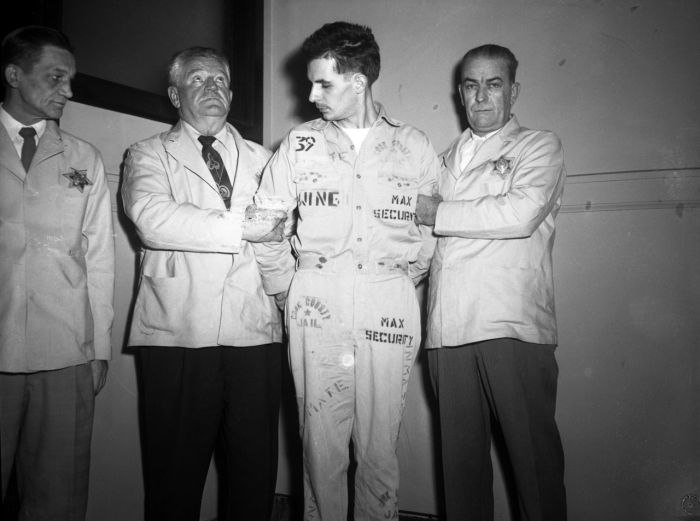 Sheriff’s Deputies Joseph Jacobsen and William Braun, from left, hold onto murderer Richard Carpenter, with help from fellow Deputy Jack Smietana during Carpenter’s five-day trial, which began Nov. 7, 1955. According to the Tribune, Carpenter “refused to clean up or dress up and had to be dragged in handcuffs and leg irons to the courtroom.” Carpenter confessed to more than 70 robberies in a two-year span, in addition to killing Detective William J. Murphy, 34, and seriously wounding Officer Clarence Kerr, 26, on Aug. 17, 1955. Carpenter, who was often uncooperative in the courtroom and jail, was found guilty and sentenced to die by the electric chair. He was executed on Dec. 19, 1958. — Chicago Tribune historical photo 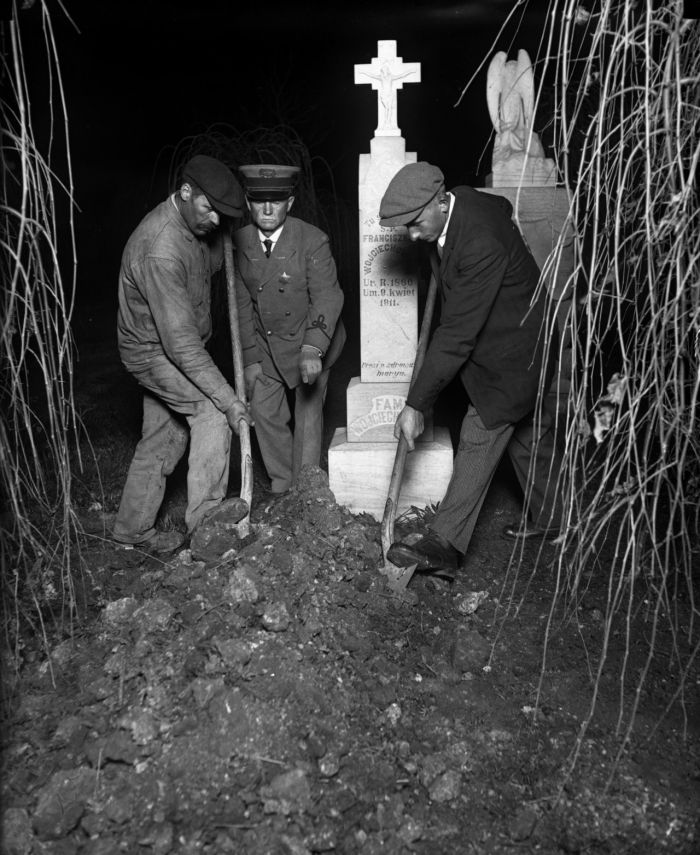 The bodies of Tillie Klimek’s many husbands and friends were exhumed as evidence in her 1923 trial. Klimek was accused and found guilty of poisoning three of her husbands to death with arsenic and sending her fourth to the hospital. — Chicago Tribune historical photo 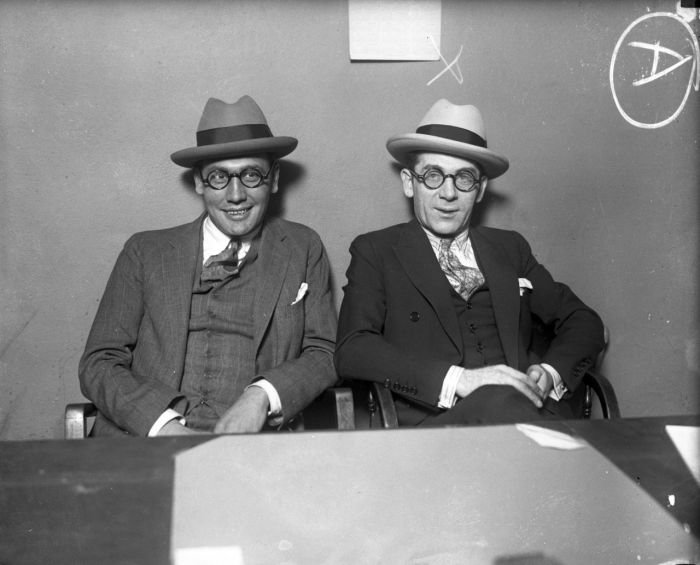 Chicago’s debonair beer barons Frankie Lake, left, and Terry Druggan, right, circa 1925. The two men were beer manufacturers and distributors who became millionaires during Prohibition. In the early 1920s, Lake and Druggan, who led the Valley Gang, owned several breweries and used their wealth to gain political influence and police protection to avoid jail sentences for beer running and tax evasion. The Tribune described the duo in 1924 as “inseparable and dapper as ever.” Both men were on the Chicago Crime Commission’s Public Enemies list in the 1930s, despite their insistence that they were legitimate businessmen who only sold Near-O, or “near beer” (alcohol-free beer). — Chicago Tribune historical photo 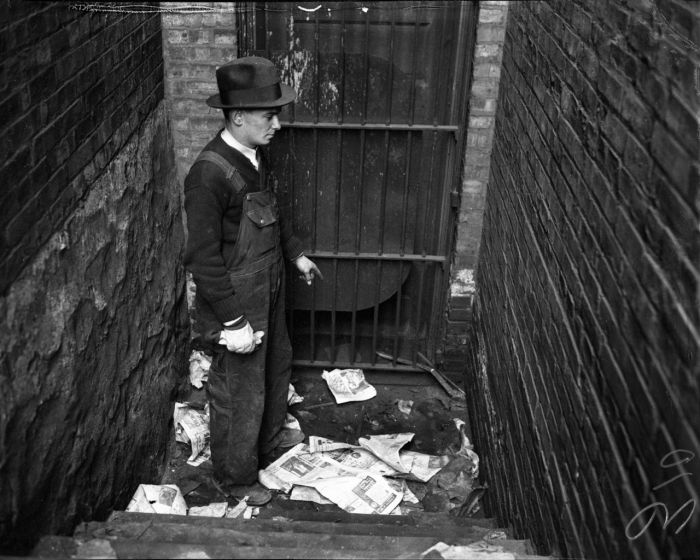 William Dolan, from the Water Pipe Department, found the body of Arthur J. Hewitt, 59, in the 3600 block of S. Park Way in April 1936. Hewitt, a prosperous retired engineer from Wheaton, Ill., had been out drinking with Jewel “Jerry” Corley (who also used the aliases Cortez and Jean Scott) on April 16, 1936, the night he was killed. Corley, described by the Tribune as a “bar-room butterfly,” attested that Hewitt fell down the stairs and hit his head. Her friends said she told them she hit him over the head with a bottle and took off to Detroit in his car. — Chicago Tribune historical photo 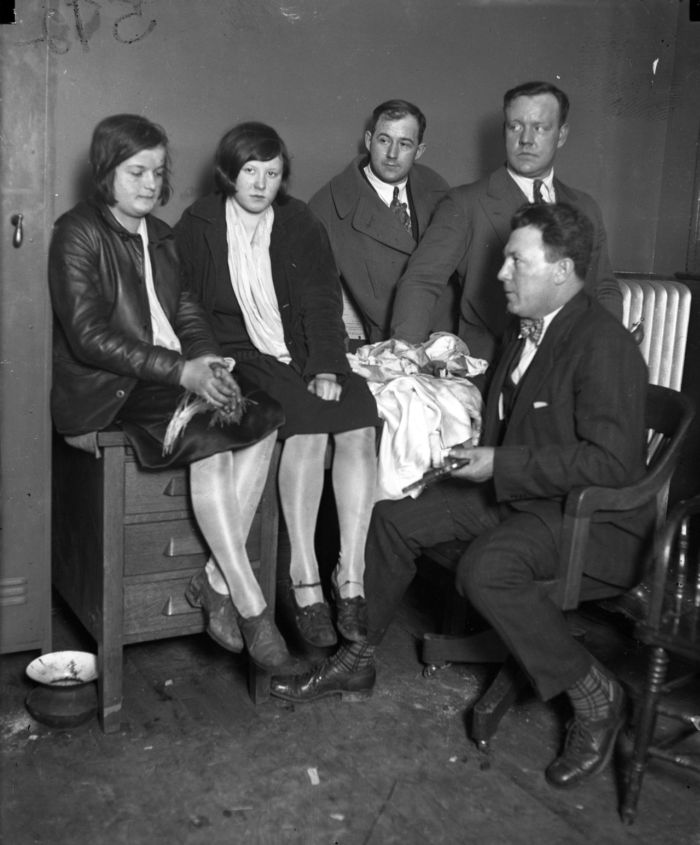 Girl bandits Jean Buttick, 15, and Anna Varich, 16, were caught red-handed while looting the bungalow of Louis Oehler in the 6100 block of South California Avenue on March 20, 1927. The Tribune reported that when the police seized Varich in the kitchen, “she spilled rings, bracelets, beaded bags, and what not from every part of her clothes. When they shook her she literally dripped booty.” Police officers believe the two bandits had looted about a dozen other homes in the prior two weeks. With Buttick and Varich are Charles Goss, Bert Harlem and Sgt. William H. Doyle (seated). — Chicago Tribune historical photo