On December 17, 1903, Orville Wright piloted the first powered airplane 20 feet above a wind-swept beach in North Carolina. The flight lasted 12 seconds and covered 120 feet. Three more flights were made that day with Orville’s brother Wilbur piloting the record flight lasting 59 seconds over a distance of 852 feet.

The brothers began their experimentation in flight in 1896 at their bicycle shop in Dayton, Ohio. They selected the beach at Kitty Hawk as their proving ground because of the constant wind that added lift to their craft. In 1902 they came to the beach with their glider and made more than 700 successful flights.

Having perfected glided flight, the next step was to move to powered flight. No automobile manufacturer could supply an engine both light enough and powerful enough for their needs. So they designed and built their own. All of their hard work, experimentation and innovation came together that December day as they took to the sky and forever changed the course of history. The brothers notified several newspapers prior to their historic flight, but only one – the local journal – made mention of the event. 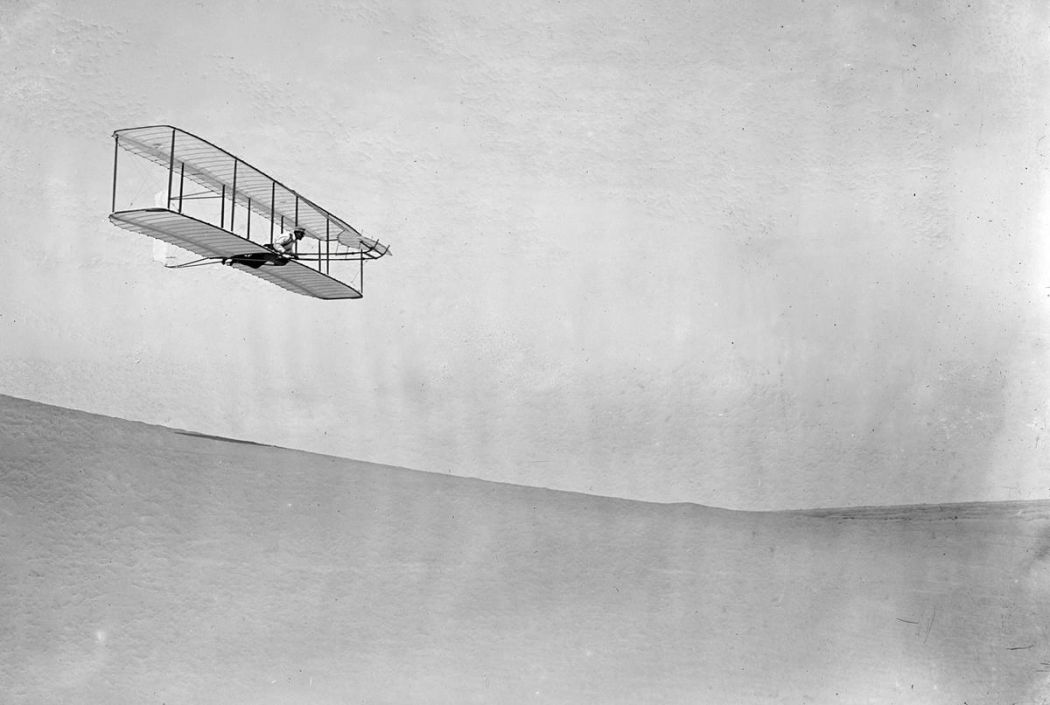 Wilbur Wright pilots a full-size glider down the steep slope of Big Kill Devil Hill in Kitty Hawk, North Carolina, on October 10, 1902. This model was the third iteration of the Wright brothers’ early gliders, equipped with wings that would warp to steer, a rear vertical rudder, and a forward elevator. # Library of Congress 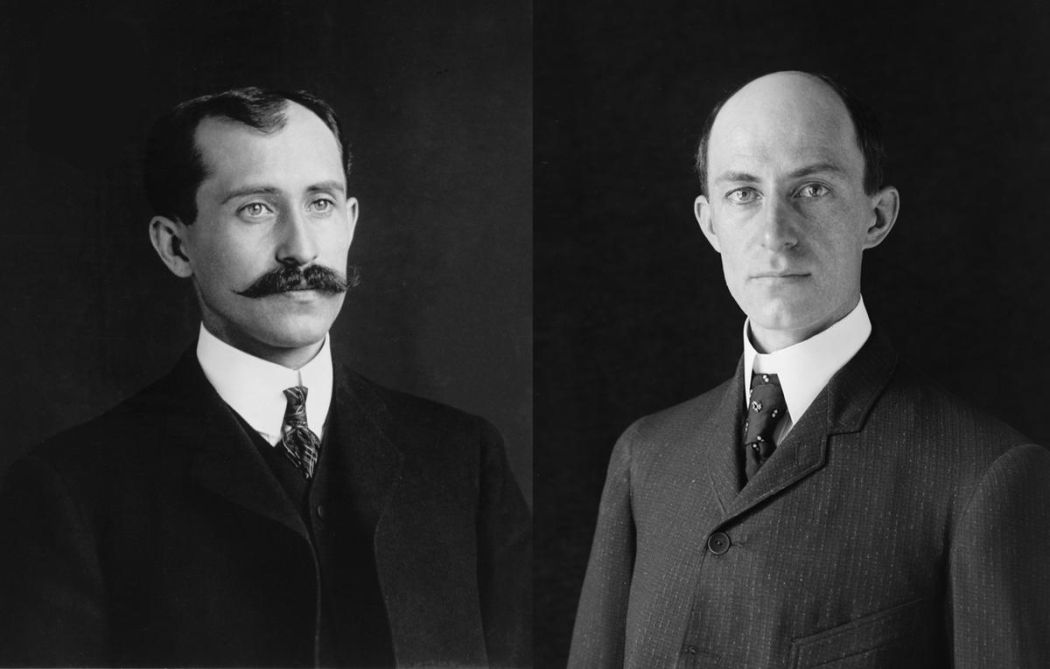 From left, Orville and Wilbur Wright, in portraits taken in 1905, when they were 34 and 38 years old. # Library of Congress 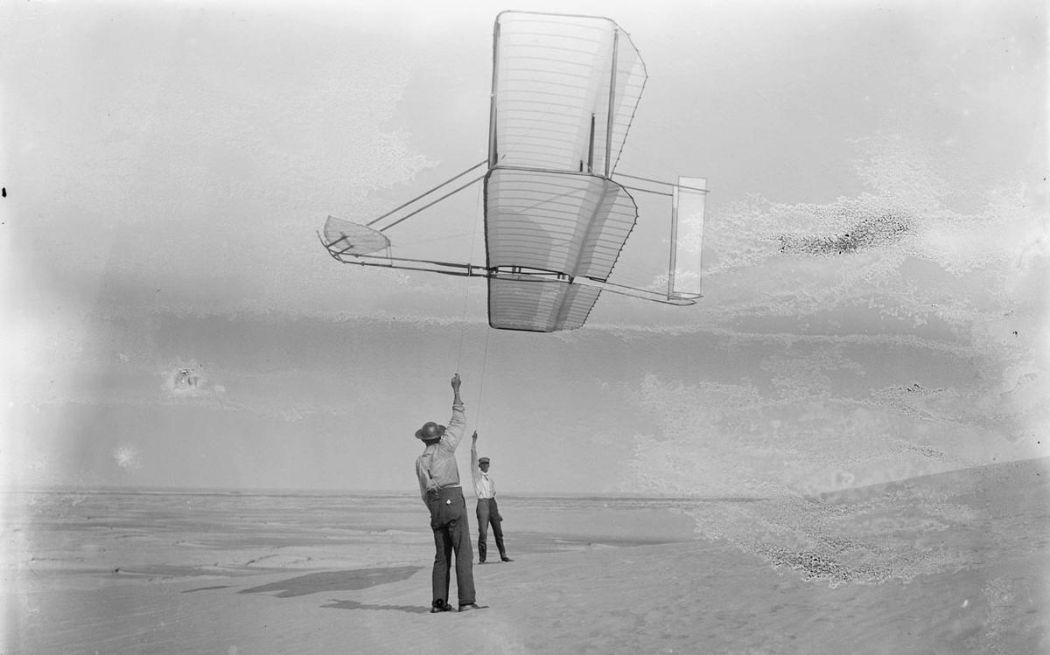 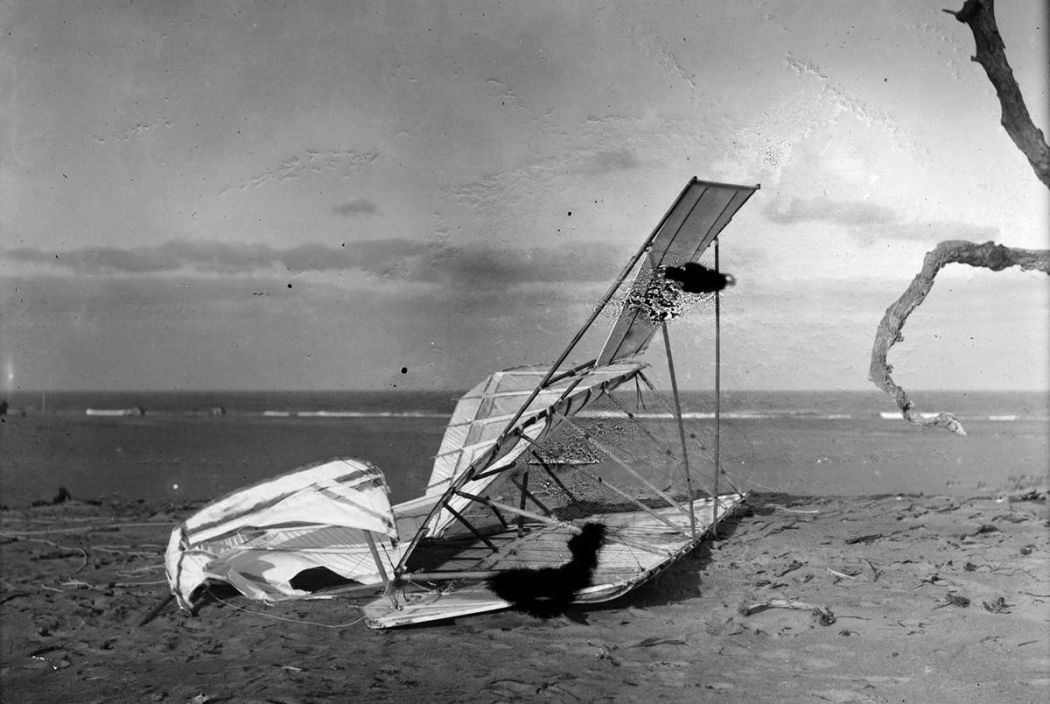 Crumpled glider, wrecked by the wind, on Hill of the Wreck, on October 10, 1900. # Library of Congress 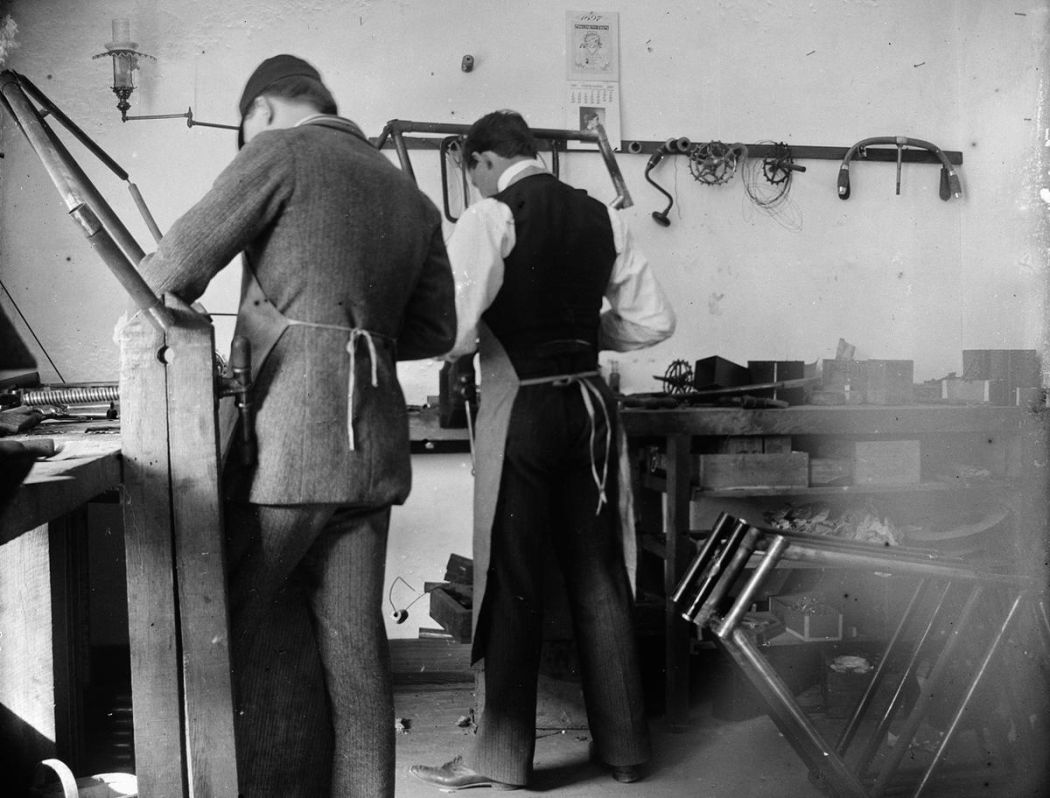 Orville Wright and Edwin H. Sines, neighbor and boyhood friend, filing frames in the back of the Wright bicycle shop in 1897. # Library of Congress 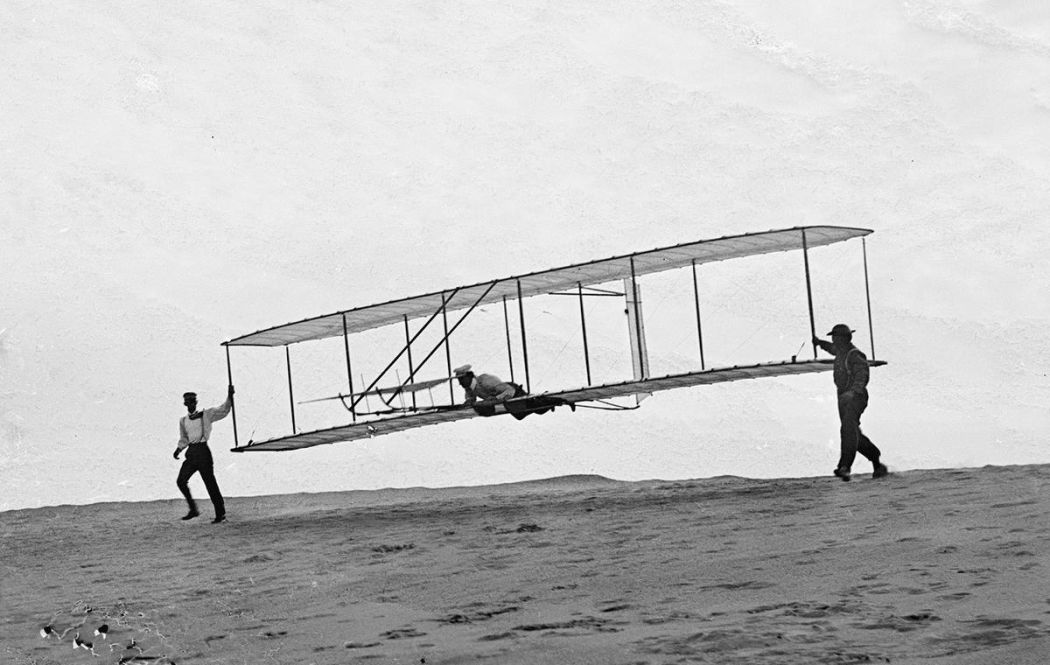 Start of a glide; Wilbur in motion at left holding one end of glider (rebuilt with single vertical rudder), Orville lying prone in machine, and Dan Tate at right, in Kitty Hawk, North Carolina, on October 10, 1902. # Library of Congress 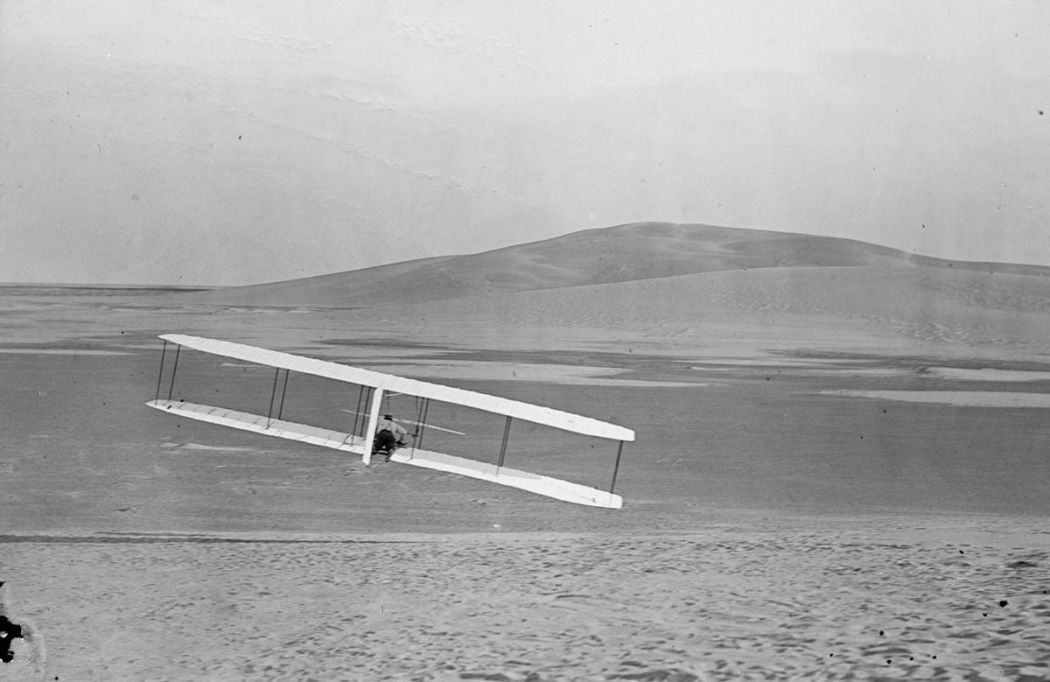 Rear view of Wilbur making a right turn in glide from No. 2 Hill, right wing tipped close to the ground, October 24, 1902. # Library of Congress 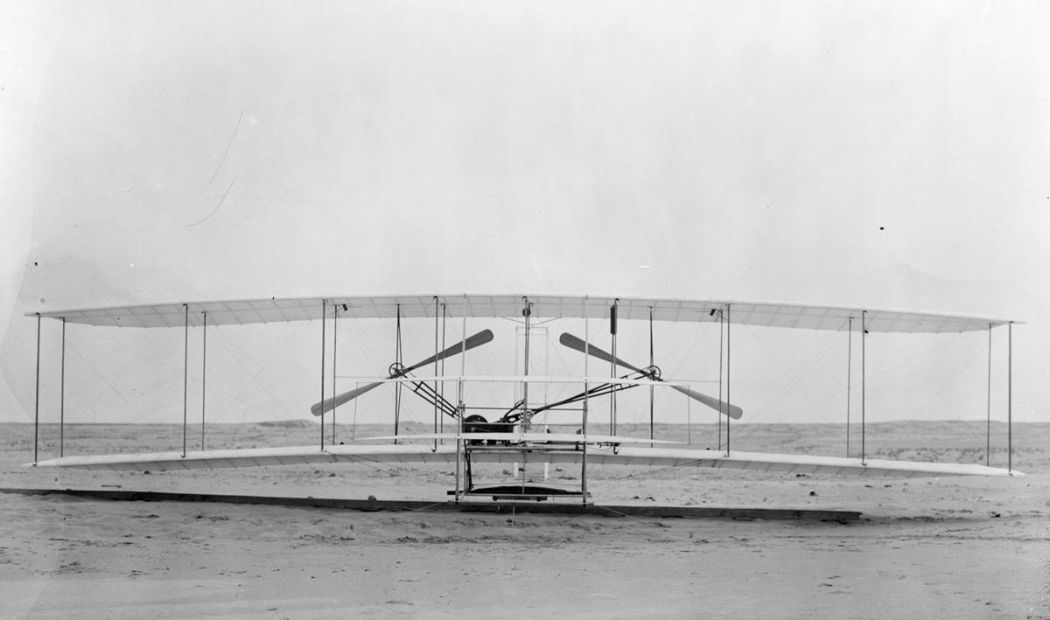 The Wright Flyer I, built in 1903, front view. This machine was the Wright brothers’ first powered aircraft. The airplane sported two 8 foot wooden propellers driven by a purpose-built 12 horsepower engine. # Library of Congress 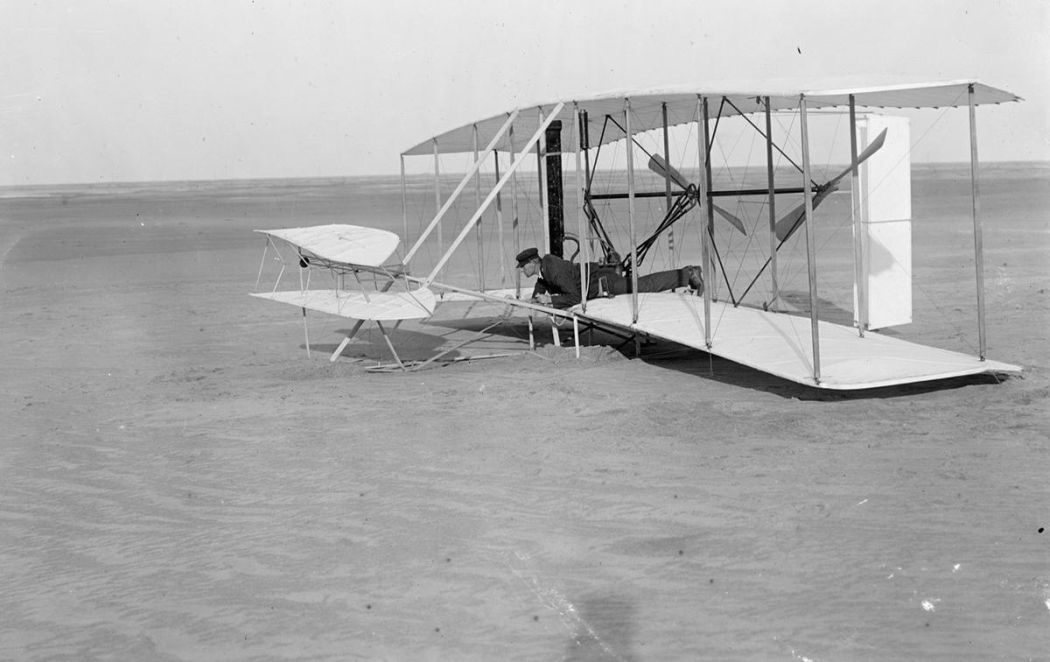 Wilbur Wright at the controls of the damaged Wright Flyer, on the ground after an unsuccessful trial on December 14, 1903, in Kitty Hawk, North Carolina. # Library of Congress 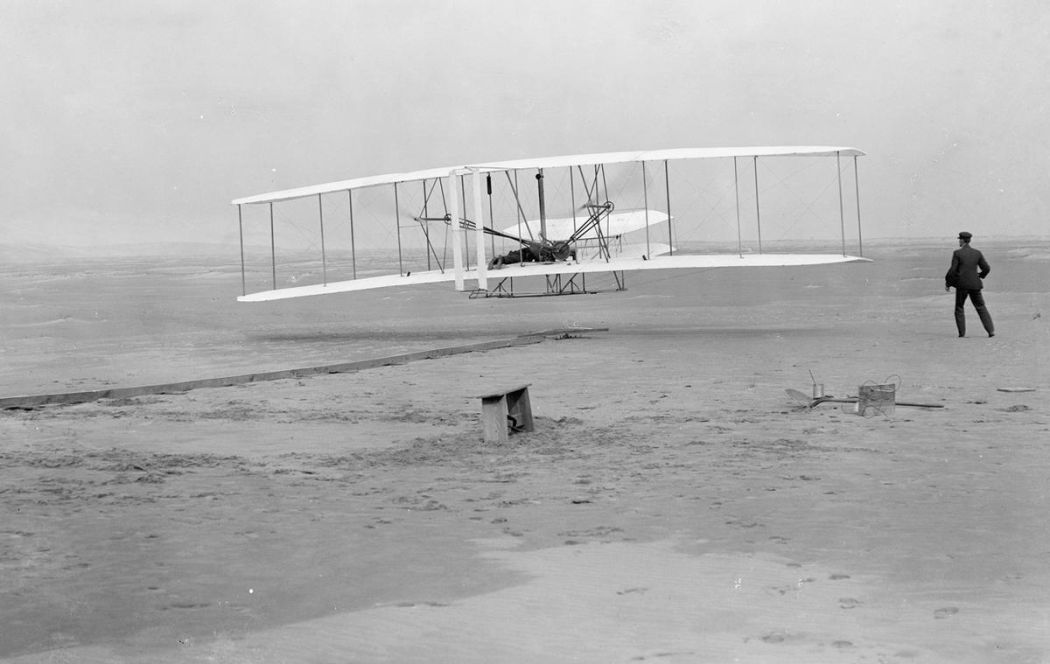 First flight: 120 feet in 12 seconds, on December 17, 1903. This photograph shows man’s first powered, controlled, sustained flight. Orville Wright at the controls of the machine, lying prone on the lower wing with hips in the cradle which operated the wing-warping mechanism. Wilbur Wright running alongside to balance the machine, has just released his hold on the forward upright of the right wing. The starting rail, the wing-rest, a coil box, and other items needed for flight preparation are visible behind the machine. Orville Wright preset the camera and had John T. Daniels squeeze the rubber bulb, tripping the shutter. # Library of Congress 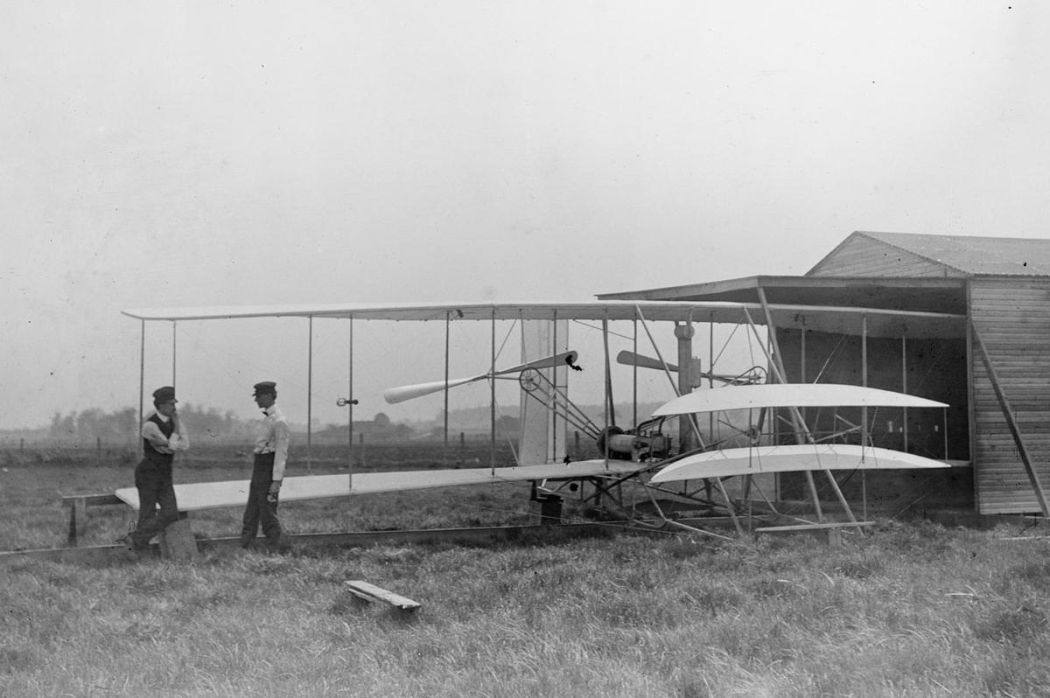 Wilbur and Orville Wright with their second powered machine on Huffman Prairie, near Dayton, Ohio, in May of 1904. # Library of Congress 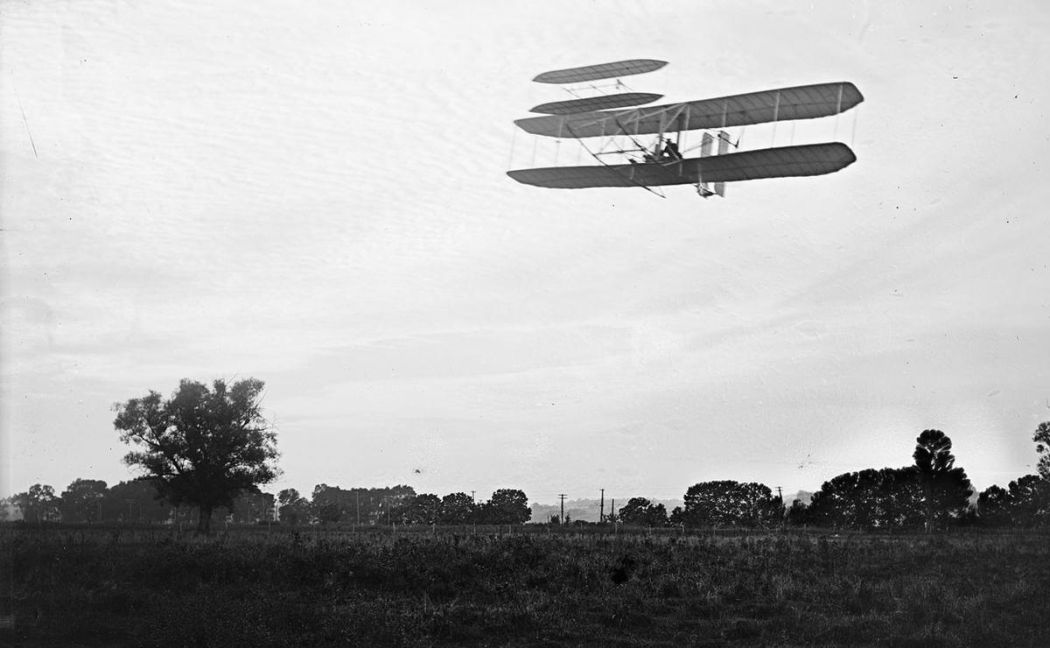 Front view of flight 41, Orville flying to the left at a height of about 60 feet; Huffman Prairie, Dayton, Ohio, September 29, 1905. # Library of Congress 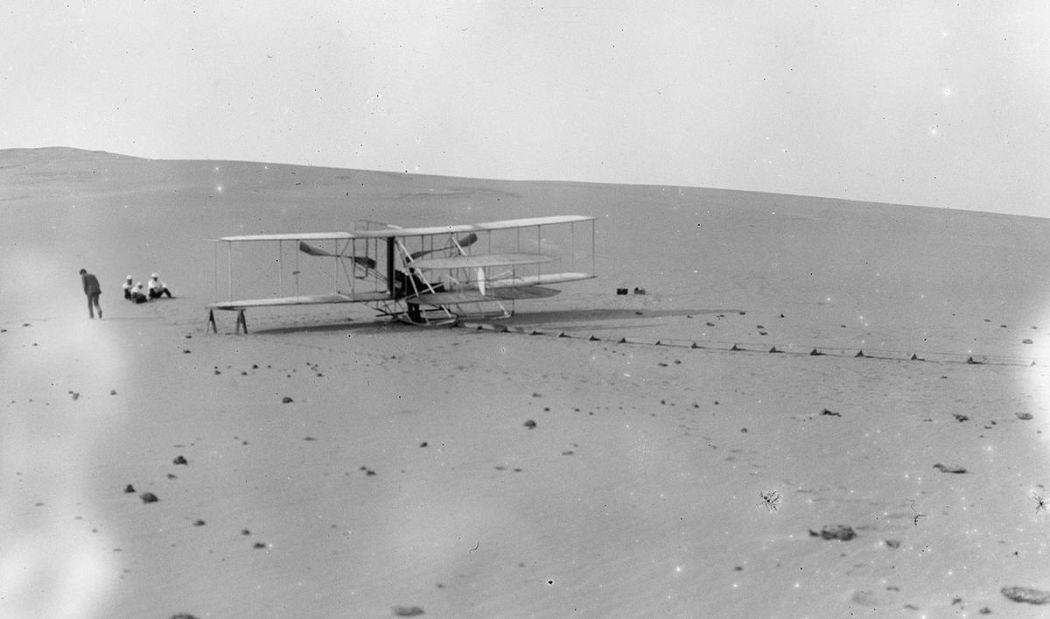 The remodeled 1905 Wright machine, altered to allow the operator to assume a sitting position and to provide a seat for a passenger, on the launching track at Kill Devil Hills in 1908. # Library of Congress 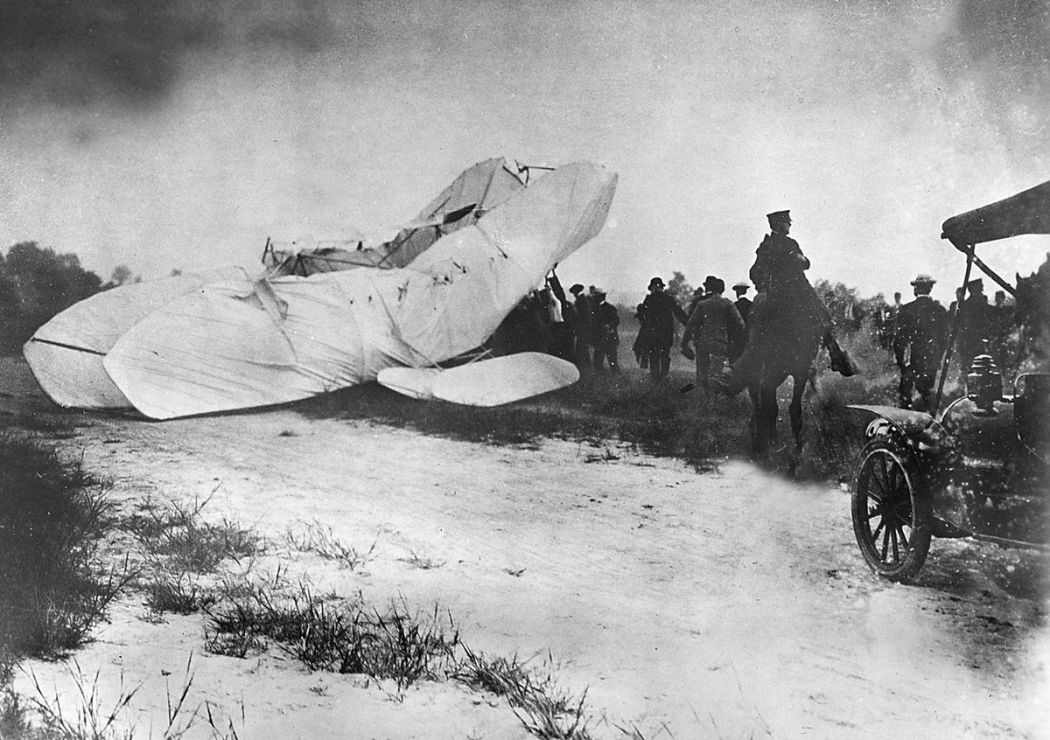 Troops of the U.S. Army Signal Corps rush to the site of a crashed plane to recover the pilot Orville Wright and his passenger, army observer Lieutenant Thomas E. Selfridge, from the wreckage on September 17, 1908, in Fort Myer, Virginia. The plane crashed during a demonstration flight at a military installation, making Lt. Selfridge, who died from his injuries, the first fatality of a military airplane crash. Orville suffered a broken left leg and four broken ribs. # AP Photo 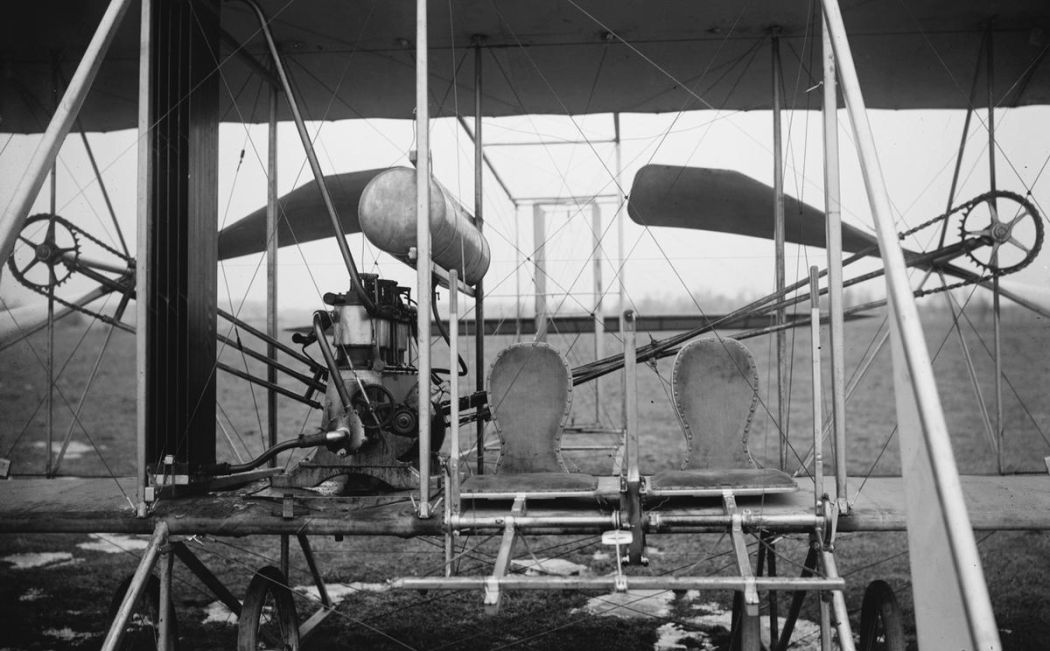 Close-up view of a Wright airplane, including the pilot and passenger seats, 1911. # Library of Congress 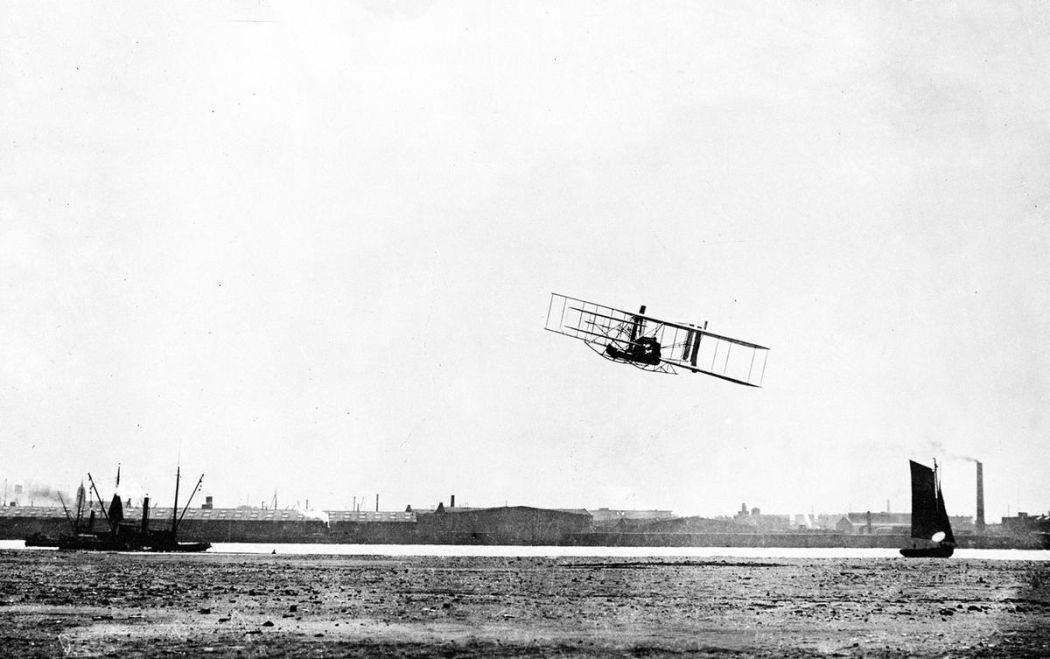 Wilbur Wright makes a 33-minute-long flight during the Hudson-Fulton Celebration in New York in 1909. Wright started from Governors Island to fly up the Hudson River to Grant’s Tomb and back, a feat witnessed by hundreds of thousands of New York residents. # AP Photo 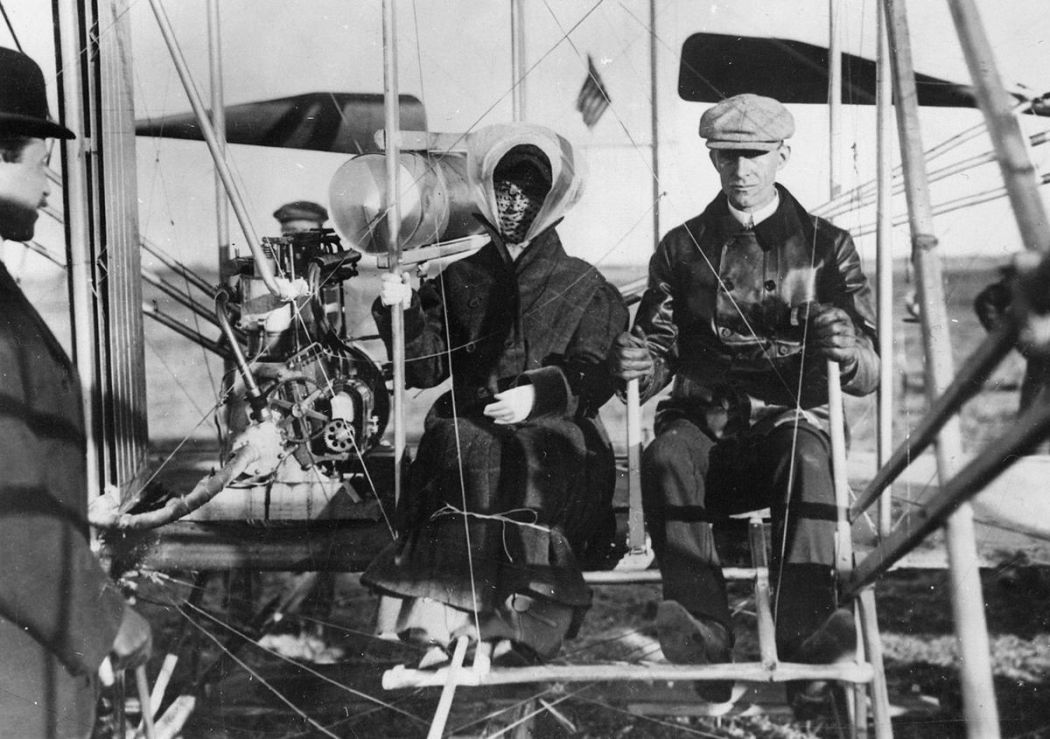 Siblings Orville Wright, Katharine Wright, and Wilbur Wright at Pau, France. Miss Wright about to be taken for her first ride in an airplane. February 15, 1909 # Library of Congress 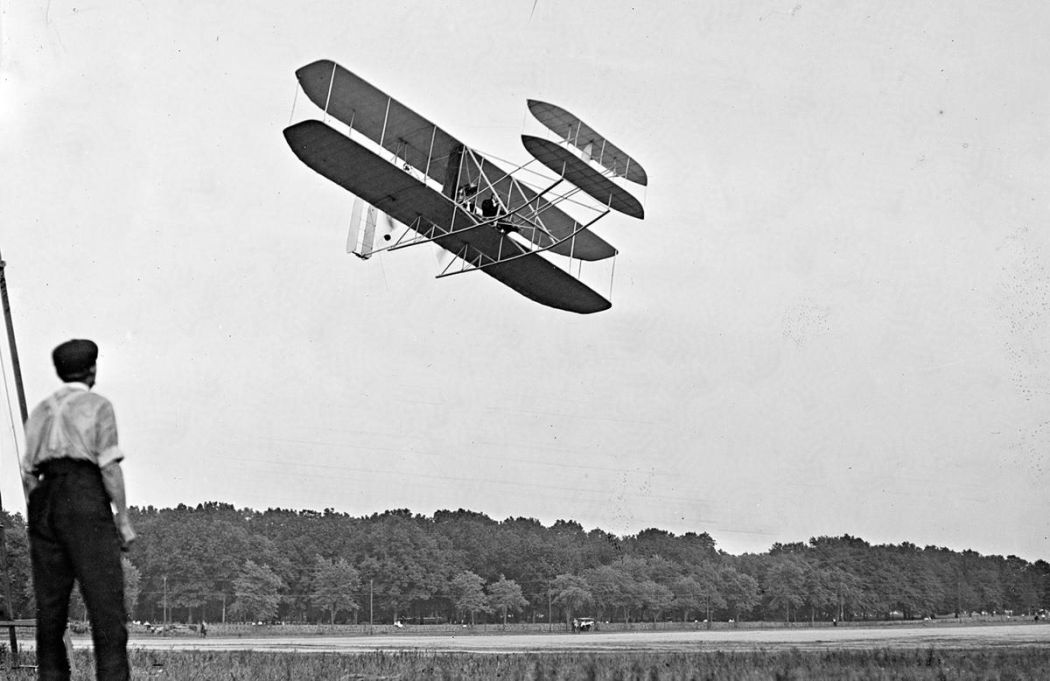 Orville Wright during proving flights for the U.S. Army at Fort Myer, Virginia, in July of 1909. The Wright brothers were able to sell their airplane to the Army’s Aeronautical Division, U.S. Signal Corps. # Harris & Ewing/Library of Congress