The German film industry (during Weimar Republic), which was protected during the war by the ban on foreign films import, became exposed at the end of the war to the international film industry while having to face an embargo, this time on its own films. Many countries banned the import of German films and audiences themselves were resisting anything that was “German”. In addition, the economic situation was unstable and the devaluation of the currency made it difficult for the smaller production companies to function. Film industry financing was a fragile business and expensive productions occasionally led to bankruptcy. In 1925 UFA itself was forced to go into a disadvantageous partnership called Parufamet with the American studios Paramount and MGM, before being taken over by the nationalist industrialist and newspaper owner Alfred Hugenberg in 1927.

Nevertheless, the German film industry enjoyed an unprecedented development – during the 14 years which comprise the Weimar period, an average of 250 film were being produced each year, a total of 3,500 full-feature films. Apart from UFA, about 230 film companies were active in Berlin alone. This industry was attracting producers and directors from all over Europe. The fact that the films were silent and language was not a factor, enabled even foreign actors, like the Danish film star Asta Nielsen or the American Louise Brooks, to be hired even for leading roles. This period can also be noted for new technological developments in film making and experimentation in set design and lighting, led by UFA. Babelsberg studio, which was incorporated into UFA, expanded massively and gave the German film industry a highly developed infrastructure. Babelsberg remained the centre of German filmmaking for many years, became the largest film studio in Europe and produced most of the films in this “golden era” of German cinema. In essence it was “the German equivalent to Hollywood”.

Due to the unstable economic condition and in an attempt to deal with modest production budgets, filmmakers were trying to reach the largest audience possible and in that, to maximize their revenues. This led to films being made in a vast array of genres and styles. 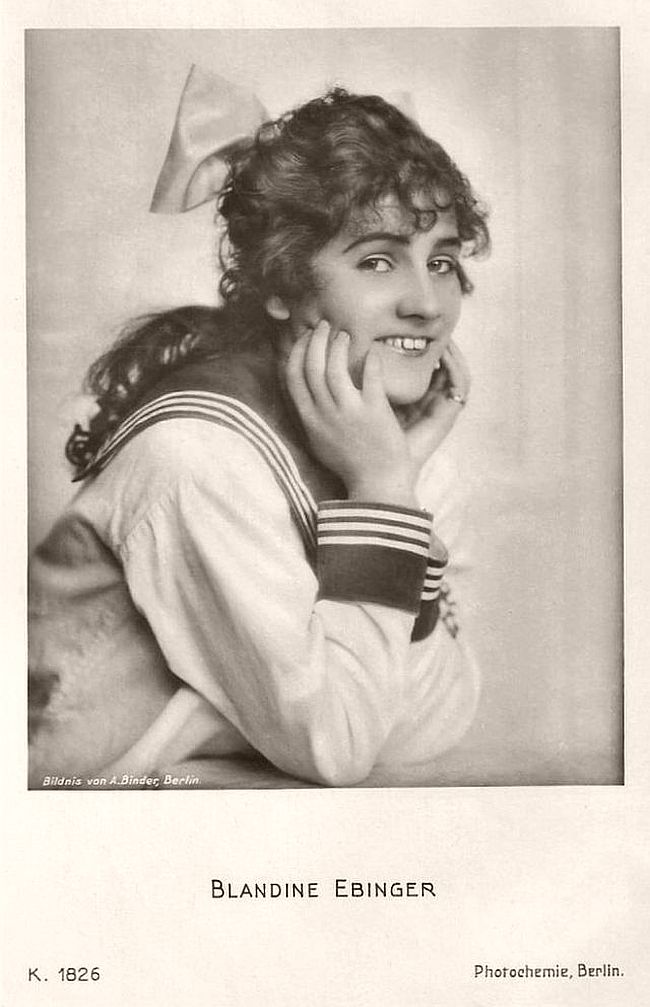 Blandine Ebinger (1899-1993) was a German cabaret singer and actress. Author Erich Kästner described her as “This lisping, scrawny person with the big, severe eyes is a master of the tragic-grotesque.” Her cinema career continued for seventy (70!) years. Her more than 90 film roles were once bigger, once smaller, but all her characters distinguished through her impressive acting. 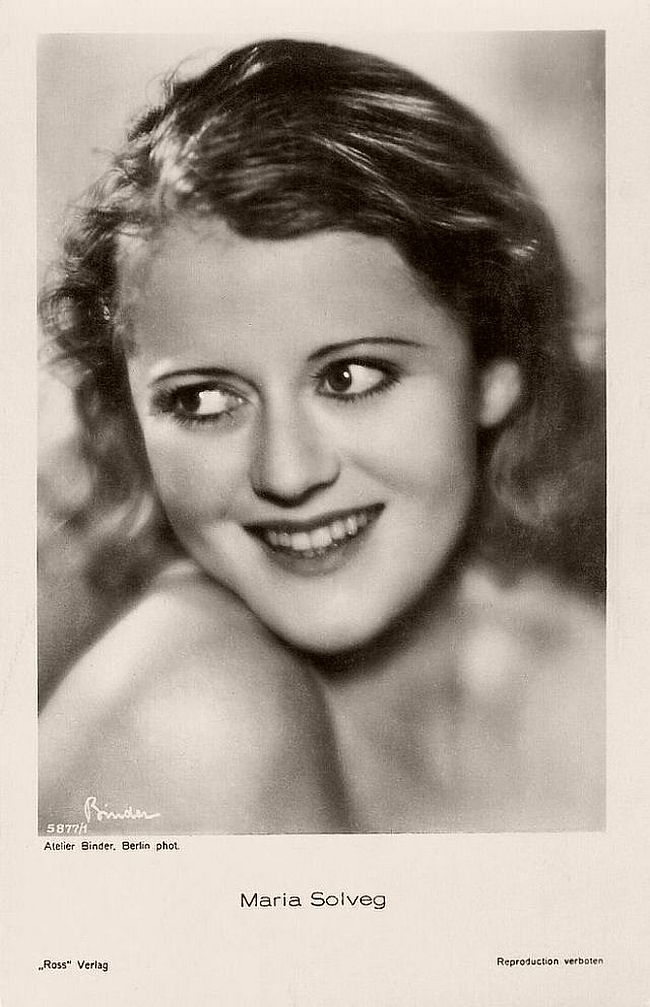 German film and screenwriter Maria Solveg or Maria Matray (1907–1993) was a star of the late Weimar cinema. When Hitler came to power, the Jewish actress went in exile and had a new career in the US as a choreographer and writer. 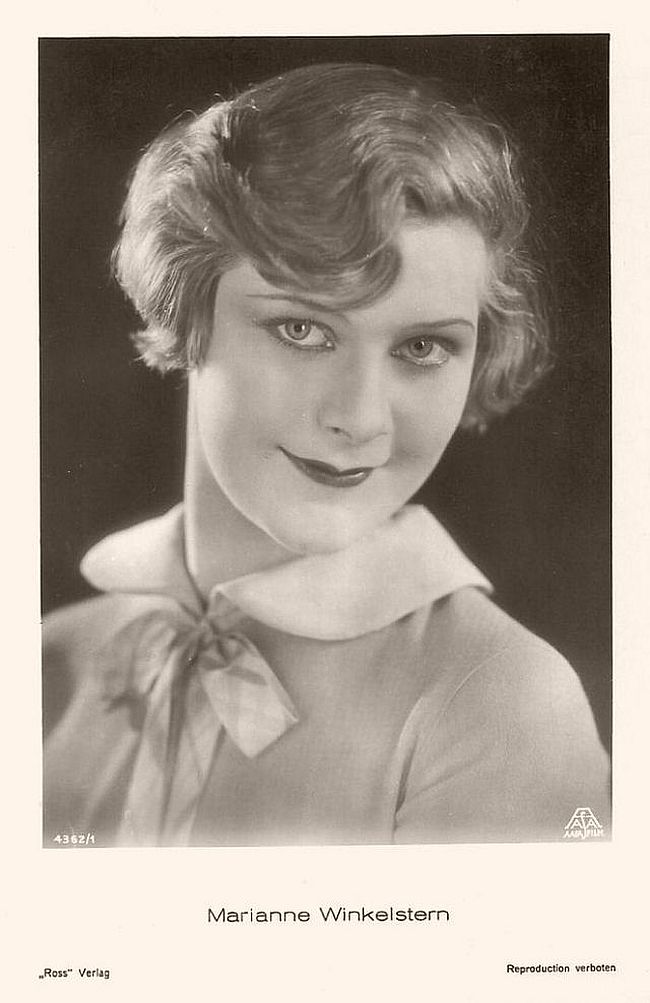 German actress Marianne Winkelstern (1910-1966) became well known as a ballerina in Germany and England. In Germany she appeared in some silent films and early sound films. 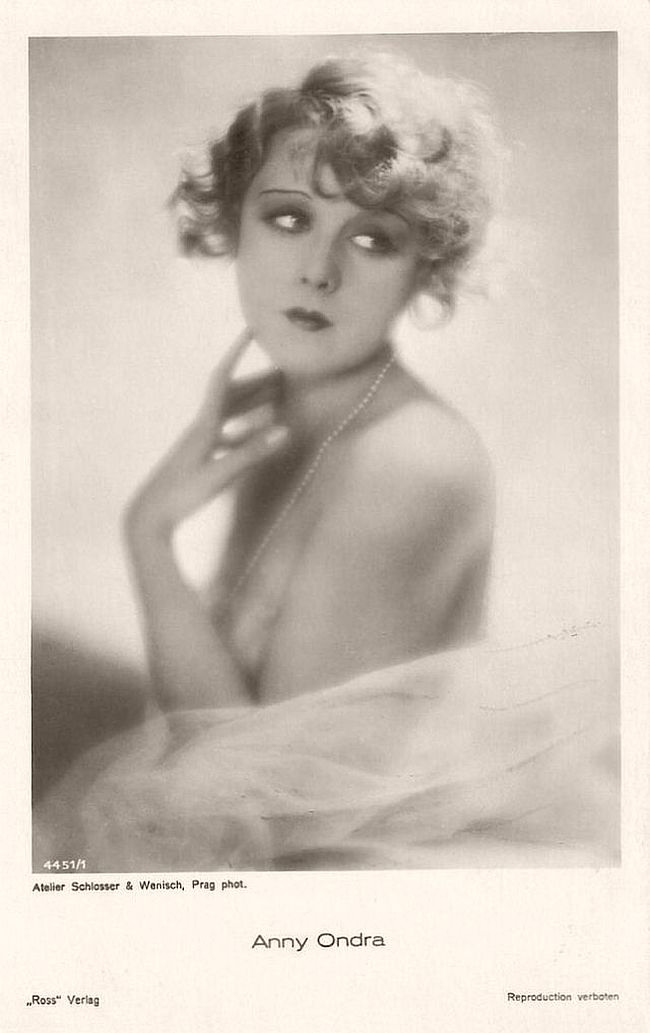 Anny Ondra (1903 – 1987) was a Polish-Czech-Austrian-German-French singer, film and stage actress. During the 1920s and 1930s she was a popular actress in Czech, Austrian and German comedies, and she was Alfred Hitchcock’s first ‘Blonde’. 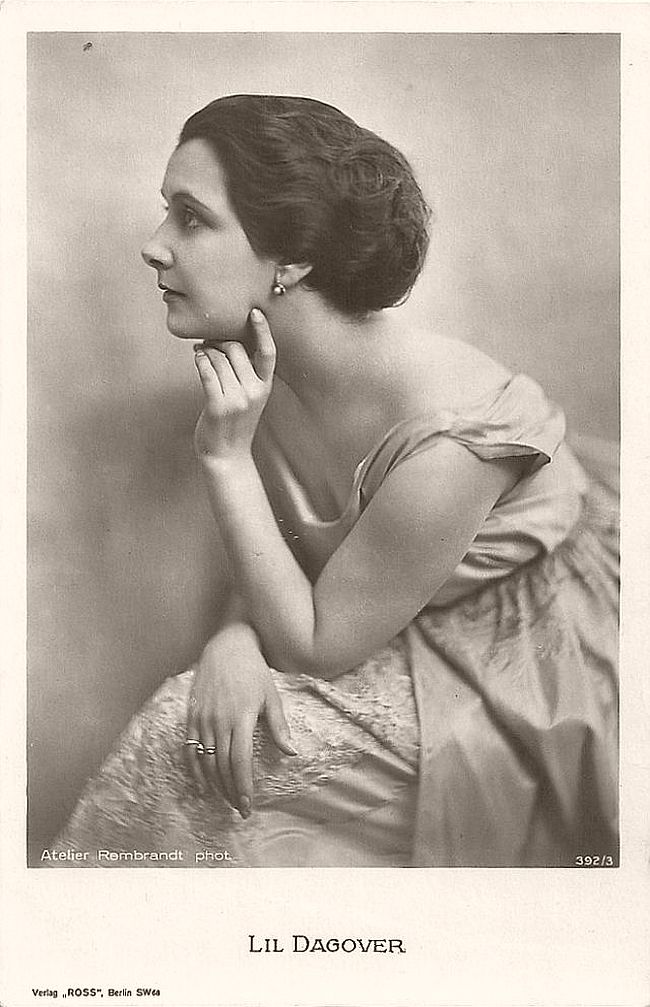 German, but Dutch born film actress Lil Dagover (1887-1980) was a exotic, dark beauty, who featured prominently during the golden age of the German silent cinema. She had her breakthrough as the prey of Dr. Caligari’s monster in the classic expressionist film Das Cabinet des Dr. Caligari (1920) but gradually her fine and evanescent beauty changed and she turned into a ´Salondame´, a lady of the screen. Her career would span nearly six decades. 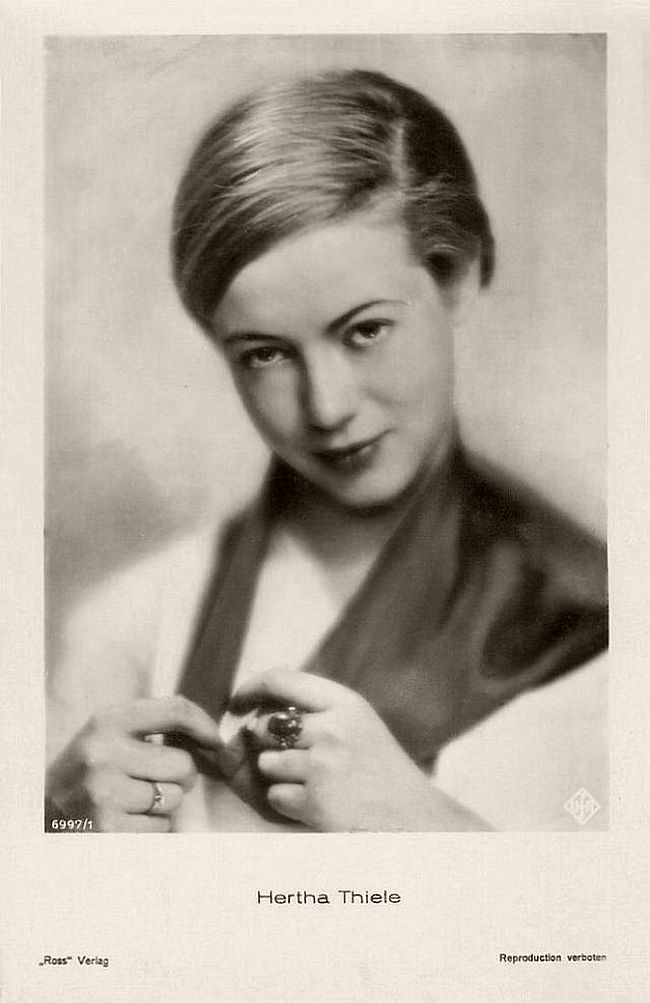 For a brief period during the Weimar Republic, Hertha Thiele (1908-1984) appeared in several controversial stage plays and films. She is best known for playing a 14 year old schoolgirl in love with her female teacher in the ground-breaking Mädchen in Uniform/Girls in Uniform (1931). She received thousands of fan letters – mostly from women. Decades later, Thiele became a well known film and television actress in East Germany. 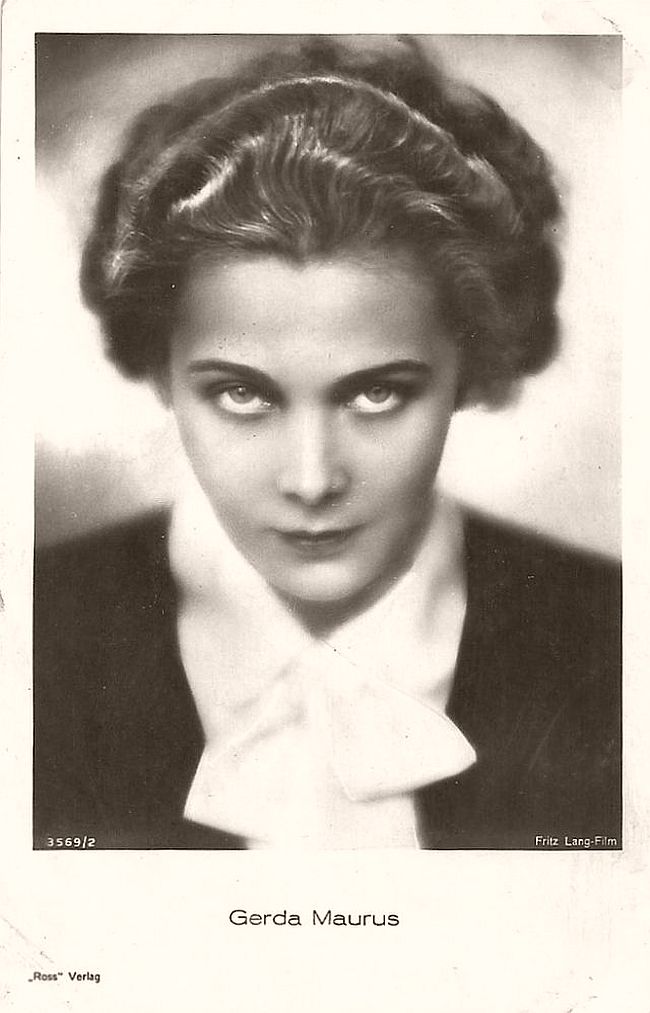 Austrian actress Gerda Maurus (1903-1968) was a star of the silent screen. With her protruded cheek bones and her forceful look she bewitched many men, including her director Fritz Lang and Nazi Minister Josef Goebbels. 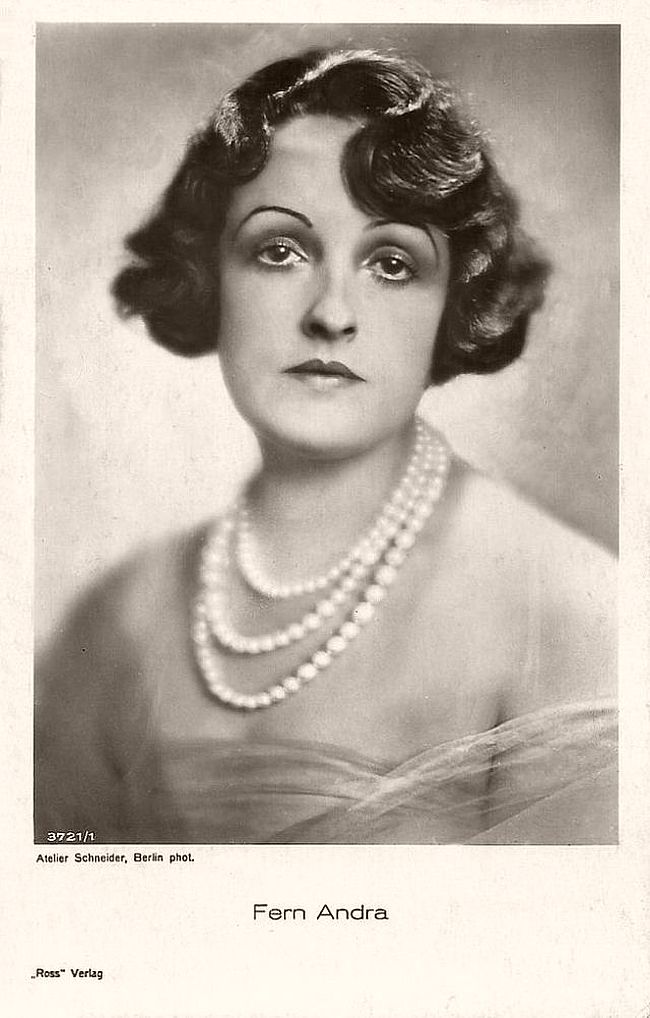 ‘Modern’ American actress Fern Andra (1893-1974) became one of the most popular film stars of the German cinema in the 1910s and early 1920s. In her films she mastered tightroping, riding horse without a saddle, driving cars and motorcycles, bobsleighing, and even boxing. 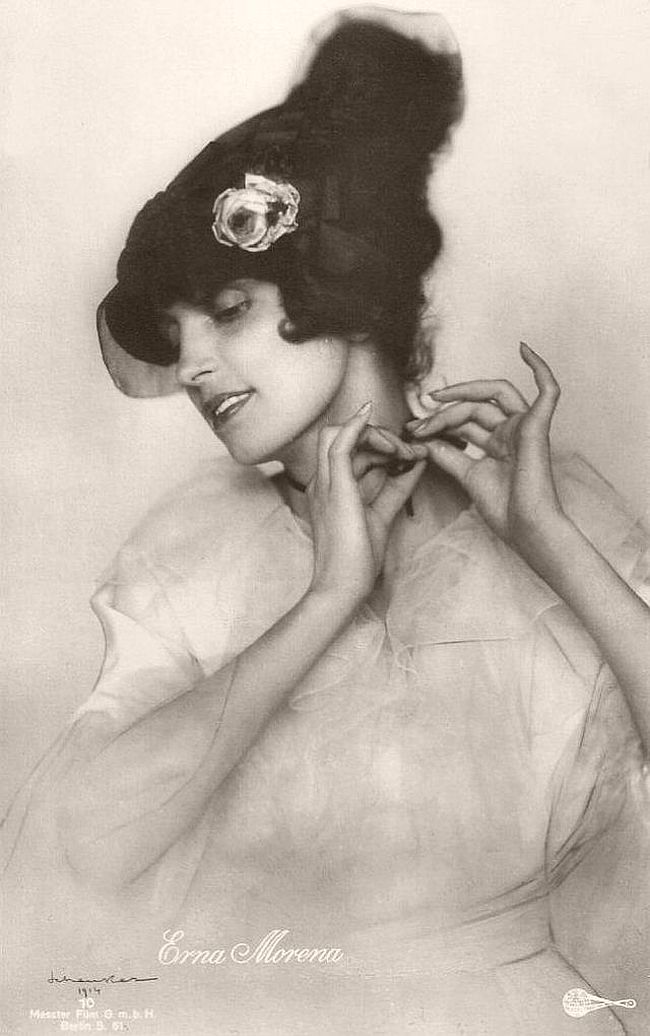 Erna Morena (1885-1962), born Ernestine Maria Fuchs, had an enormous career in German silent cinema in the 1910s and 1920s, and until the mid-1930s she was regularly performing in German sound films. 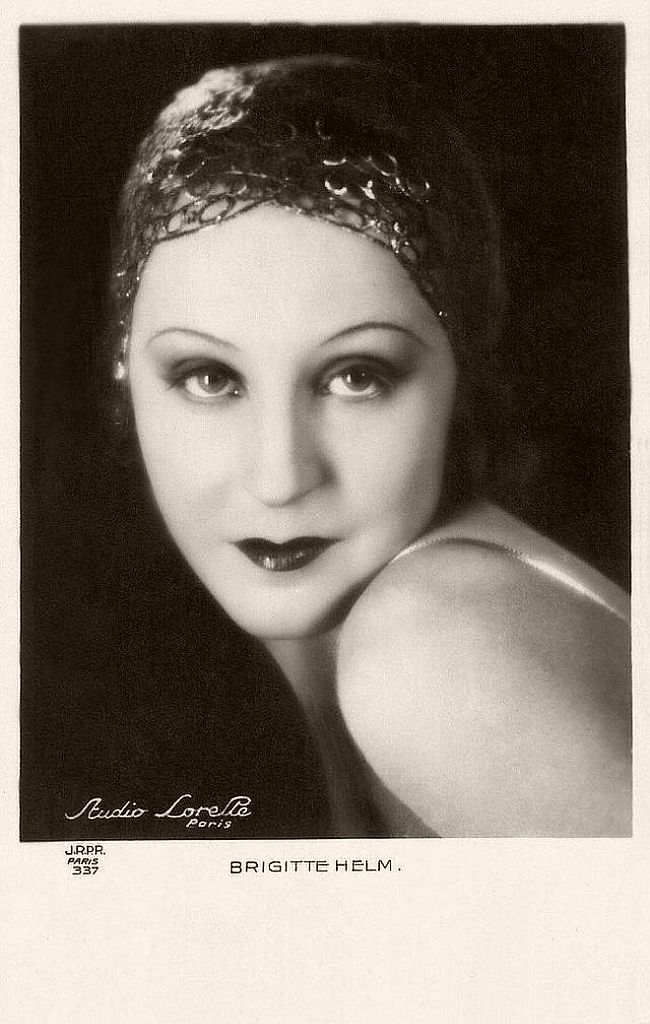 Brigitte Helm (1906-1997) was not even 18 when she was discovered by Fritz Lang for the lead in his film Metropolis. Helm played the double role of the noble and chaste Maria and her evil and sensual twin, a robot created to urge the workers in revolting and destroying their own city. Helm was subsequently often cast as the evil but oh so seductive ice queen, as in the two versions of Alraune; Marcel L’Herbier’s late silent film L’Argent; and the multilinguals The Mistress of Atlantis by G.W. Pabst, and Gold, by Karl Hartl. 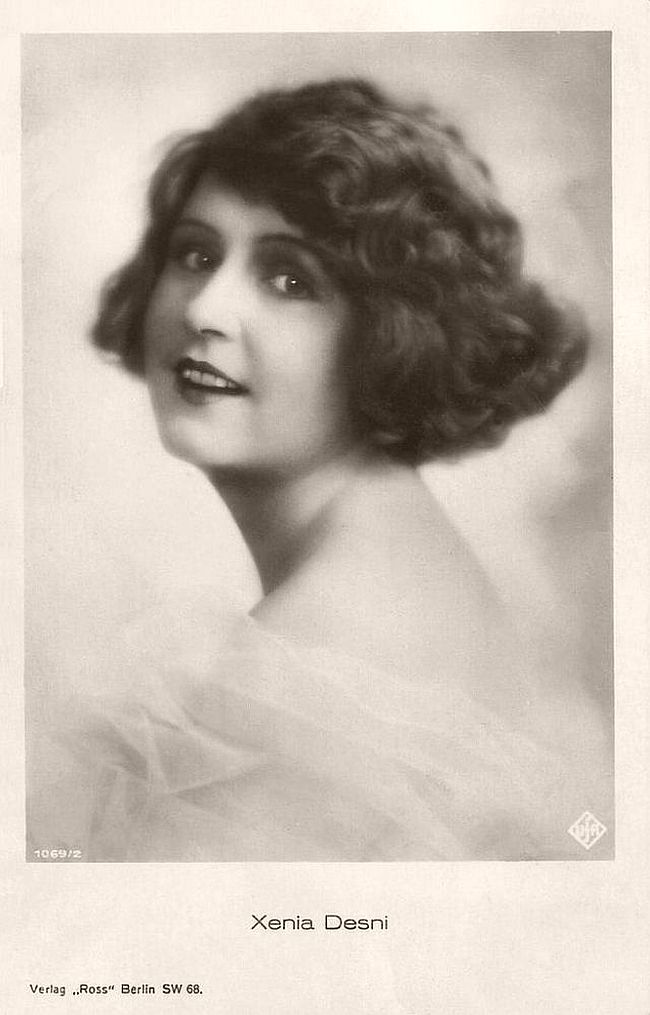 Ukrainian actress Xenia Desni (1894-1954) was a star of the German silent cinema. 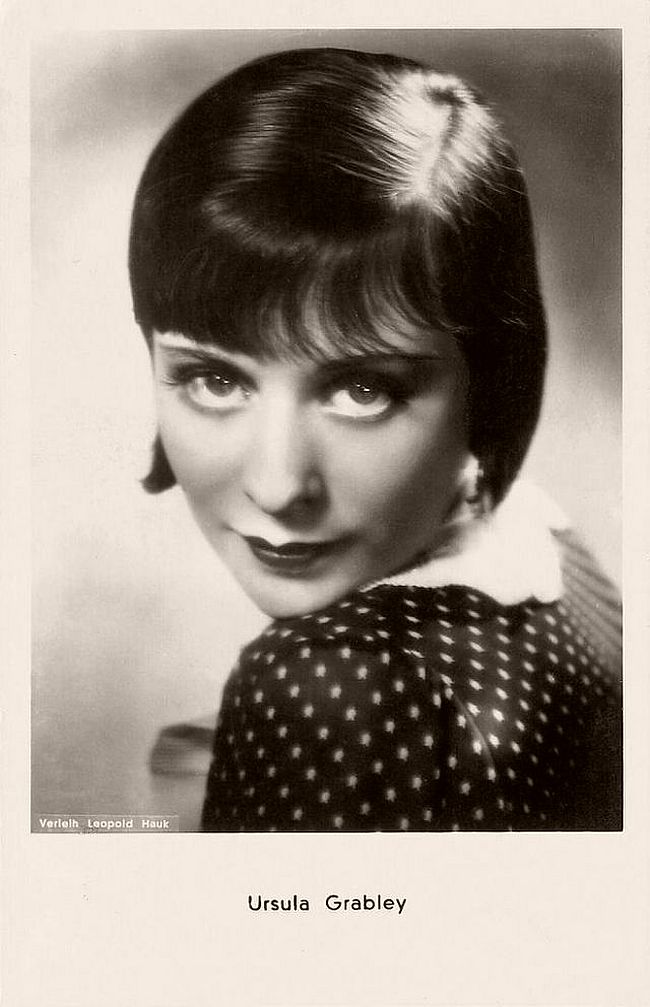 1930’s ‘Girl of Today’ Ursula Grabley (1908-1977) was a German actress appeared in more than 60 films and TV productions. In 1939 her film career was interrupted by a dispute with Joseph Goebbels.