Few careers with a camera have been narrated and celebrated as that of Bourke-White; for as legendary as her pictures were, so was the life and name she made for herself with them. Her success was a public fairy tale and a private labor: hard work, showmanship, and compromise intensified by historically high expectations – especially those she had for herself. There was always a story to tell, a client to satisfy, an editor to convince, a truth to capture. Her approach was a perfected high wire act that brought romance and discipline into balance to create widely circulated and appreciated images. She emphatically summoned content and form in compositions that had to please both those with agendas and those subject to them: sellers and buyers, publishers and readers, middle class American audiences and the bigger world they consumed from their sofas. With legendary fortitude and energy, Margaret Bourke-White nailed the assignments she was given with formal brilliance and incisive descriptive power.

In this series of images, we feel a relaxing of her precision as she recorded an emblematic struggle between natural forces and human ingenuity, between our physical limitations and the devices we create to exceed them. The parachute, a post-Seventies euphemism for career transitions (What Color is Your Parachute?), becomes a vast blossom to which male silhouettes are tethered, perplexed, in awe, at odds. The invention that keeps the gravity-bound human body aloft through a slow and safe descent from an airplane is here grounded but still breathing. It is not a magical airborne canopy kept ballast by its cargo, but a tempermental sail struggling to stay air-filled. The men entangled with the giant silken jellyfish and a limbless test dummy appear dressed in three uniforms: a Don Quijote airman complete with leather flight helmet, as Macy’s Parade balloon handlers in white jumpsuits, and as company men in fedoras and long dress coats. It is a fantastic scene set on a flat grassy stage, a featureless landscape where the characters and their dilemma seem to be all that exists except for the rare sighting of the distant plane that delivered them.

Issues that arise when artistry and intention mix with profitability swirled closely around Bourke-White in the socially turbid Thirties, the decade she began as the darling of American advertising photography while famously reporting on the Soviet Union for Fortune, publishing the Depression classic You Have Seen Their Faces with Erskine Caldwell, and helping to launch LIFE Magazine as their marquee staff photographer. A woman who invented herself as she was defined by the powerful men around her, Bourke-White was driven and resourceful. Her desire for control over her circumstances gave her command of her pictures and helped her survive and even flourish professionally. But control can be an illusion, harshly and unpredictably, collapsing the smart image of commercial airlines and other modern industries who hired Bourke-White to idealize the American scene and identify it with their goods and service. In the detail of the postcard settings and beautiful aerial views they commissioned her to produce, was another story of hungry farmers and dustbowl squalor.

In the March 22, 1937 issue of LIFE, a publication just six months old, there was a cover story entitled “Parachutes.” Margaret Bourke-White’s pictures told the story of the Irving Air Chute Company in Buffalo, New York, the world’s largest manufacturer of parachutes, controlling over ninety percent of the market in thirty-eight nations. The making, testing and nature of their product was the content of the copy, but of the twenty images that illustrate the article only two are variants of the twenty that occasion this slim volume. Four years later, parachutes were to become important military gear in active service of World War II, a historic conflict Bourke-White popularly and extensively covered. This greater drama was hinted at in the final paragraphs of an uncredited parachute reporting where Soviet advances in “the sport” of skydiving were described and characterized as a “war threat.” An account of the business success of an American company and its executives was already giving way to a war story, a bigger moneymaker on any newsstand.

The photographic sequence of parachutes being tested by Irving employees in this book did not make the article in 1937, but survive instead as diminutive and precious vintage prints, as art. Their wonder is in their ambiguity, their lack of captions and context, their archetypal address of human insignificance, of who is really pulling the strings. Margaret Bourke-White was a determined woman who held fast to her own reins and became one of photography’s pioneers. At times she was like the parachute test dummy propped up among ambitious men, but most often she was the safely-landed daredevil skydiver – heroic, expert, and irresistibly modern. 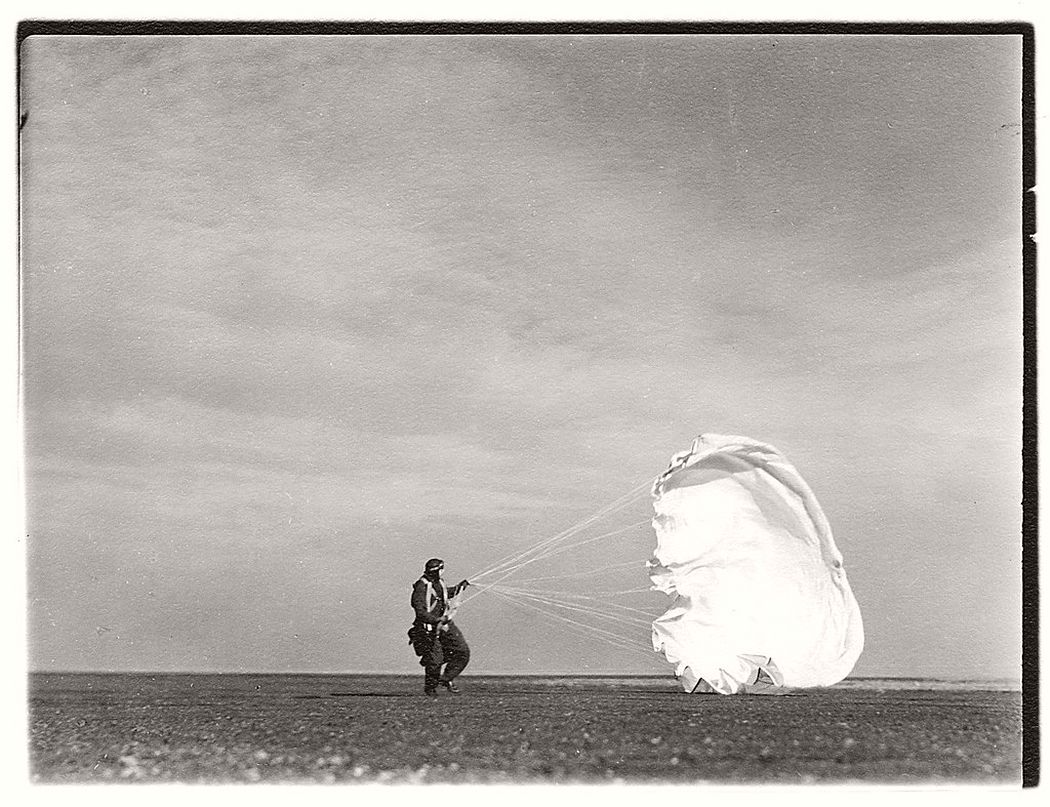 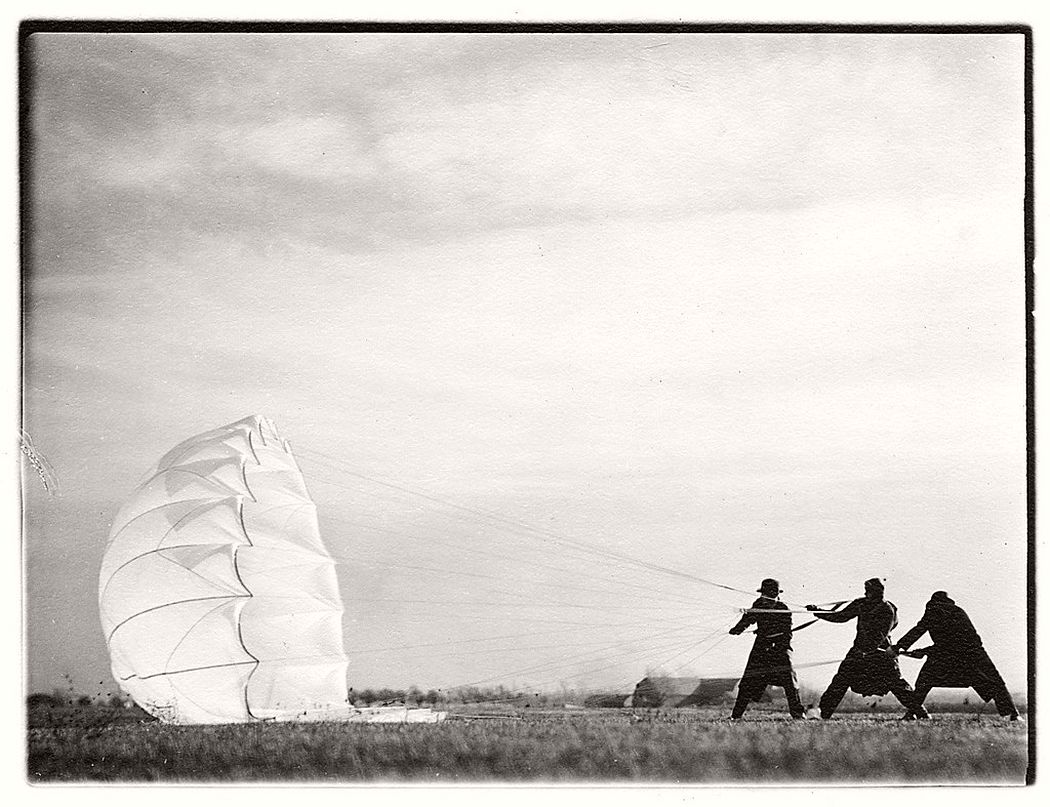 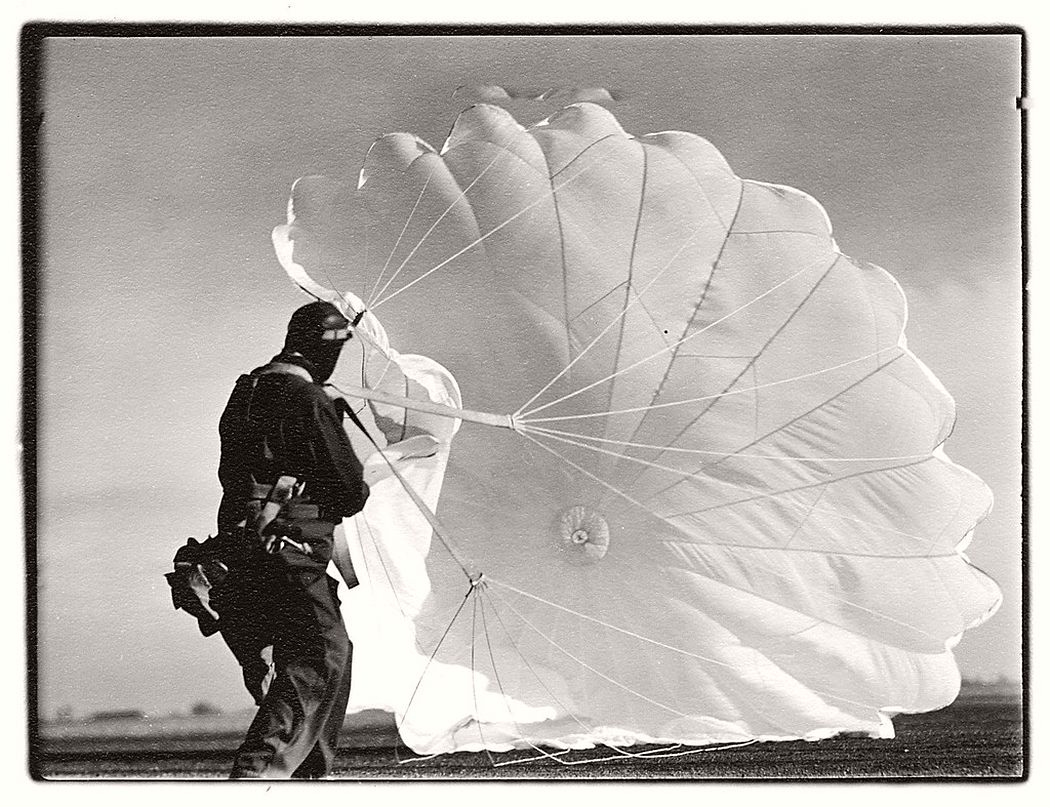 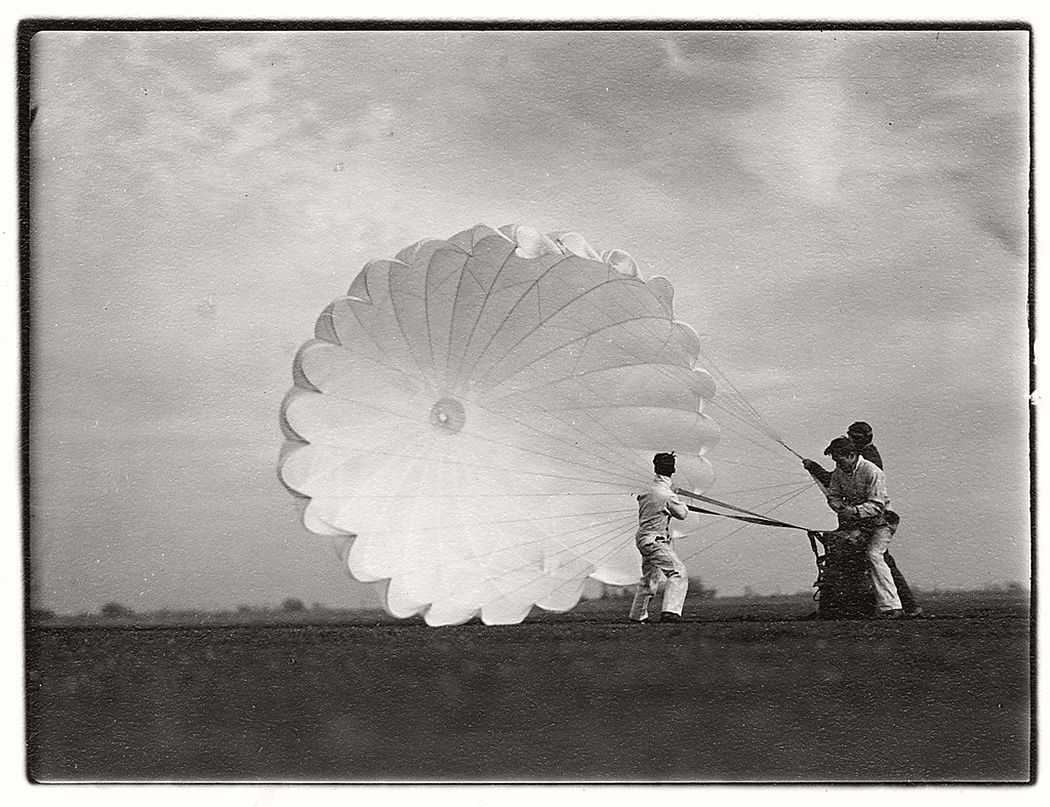 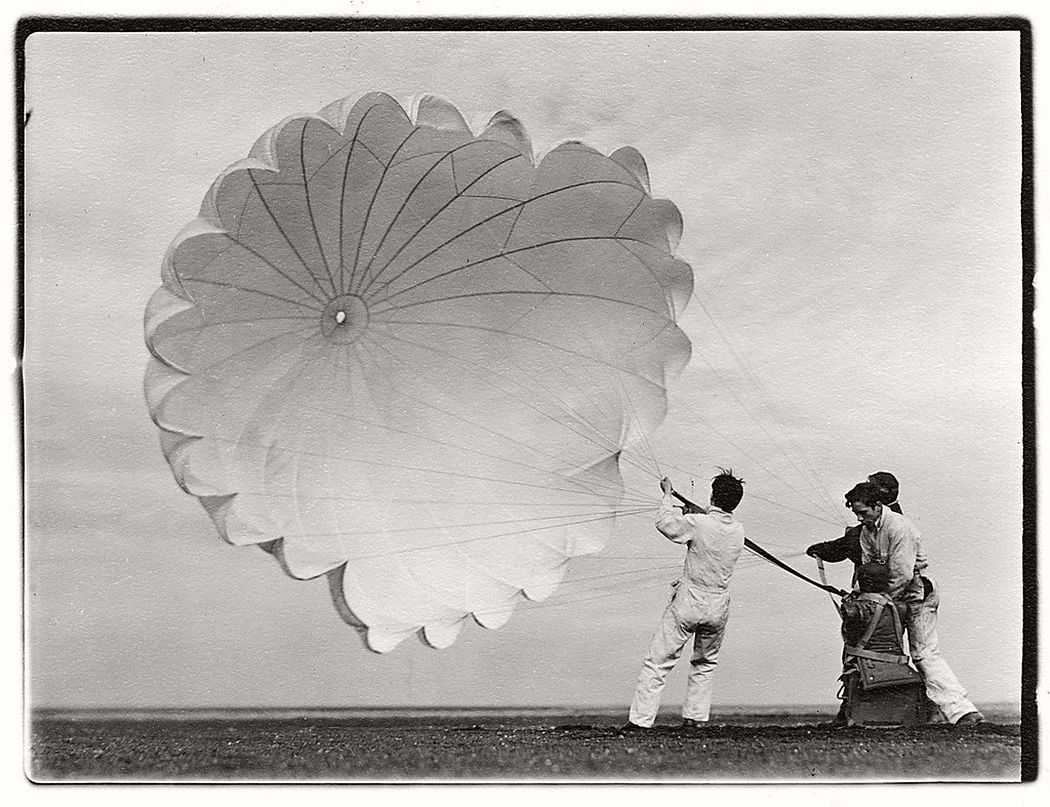