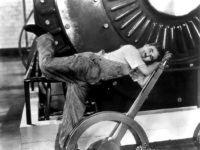 19 July 2016 0
Modern Times is a 1936 comedy film written and directed by Charlie Chaplin in which his iconic Little Tramp character struggles to survive in the modern, industrialized world. The film is a comment on the desperate employment and fiscal conditions many people faced during the Great Depression, conditions created, in Chaplin’s view, by the efficiencies of modern industrialization.